First a message about weather forecasts…  It was not near as cold overnight as they called for and today we were riding part of the day without our coats.  So much for freezing and snow.  We thought we were in for a real struggle and it turned out to be a great day for riding.  But before we get all smug, it did snow only 2 hours by car north of us – a message relayed by a car driver this morning and they had 4 inches of snow, where we were only a few weeks ago.  So, they got the forecast off, but only by a little.  Today goes in our win column for sure.

We had a nice cooked brekkie in the Bell 2 lodge this AM.  The same waiter from last night was there.  We also did laundry with him last night.  It was fun talking about his work situation and how they get folks to cover the crazy short intense summer season that they have up here.  Many of the staff at Bell 2 are from further south, Terrace in particular and most are First Nation folks.  They work three weeks on, one week off.  Get free room and board, and a free bus ride to/from Terrace for their week off.  It’s an opportunity job but it very hard work and they don’t get paid much.  It seems that many don’t come back for a second season.  We’ve toyed with working a remote roadhouse for a summer – just for fun, so it was interesting to get the inside story.

So, to the theme of the day…  We didn’t get away from Bell 2 until almost 9AM.  As such, we should have missed bear rush hour out on the old Cassiar Highway.  Well, not today.  In the first 40k, we saw 5 bears. Most were small and all of them ran from us.  We had a motorist slow to warn us of a mother with cubs but only spotted a small juvenile when we got to the area noted.  All of the bears were black bears, bringing our trip total to 15 black bears and 2 brown bears.  Bear spray and bangers remained holstered throughout the encounters but the bells got a good workout.  Sorry, still no photos.

Funny thing about the bear is that we saw them all right before we passed the sign in the photo below.  After the sign and for the rest of the day, we saw no bears.  I’m sure that there is a time of day element but I’m also happy sticking with 5 bears in a day.  That’s a new record for us anyway. 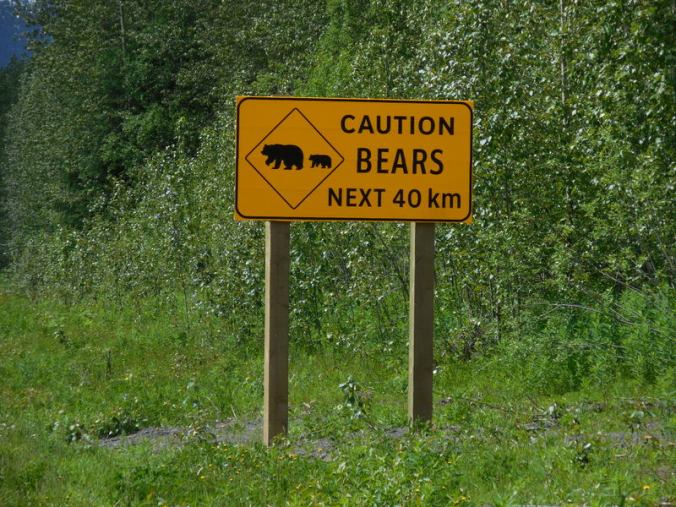 And speaking of bears, today’s rhetorical question is the proverbial “do bears s**t in the woods”.  I’m sure everyone’s heard this and for most the answer seems obvious.  Well, it turns out that for the past week or so travelling the Cassiar Highway, the bears here did not get the memo.  They spend much of their time in the early summer eating the dandelions on the side of the road, and thus living on the side of the road.  And in the case of a bear, than means marking the road as their territory.  The photo below is evidence of this behaviour.  I’m sharing this image today but really, I could have taken literally hundreds of this very same photo.  There is so much bear poo on the side of the road that we’ve actually discussed it with other travellers, other travellers with motors, so it’s not just slow crazy bicyclists.  Finally – the answer to the rhetorical question posed above:  Well, not all the time…

Continuing the animal theme, we also spotted a number of grouse today.  Not sure of the number as there a couple adults and a stack of little ones.  We’d heard from other road users that they were not very bright and tended to get run over a lot.  We haven’t seen much in the way of roadkill but can testify that they didn’t move very quickly and the little ones were completely random – you can see how they would get run over.  They were so slow that I even managed a photo of one chick and mom.  As for the beaver, no photos there either.  But I can report that the beaver had us baffled at first.  It was starting to cross the road and decided to go back when it saw us.  Funny little tail a beaver has.

And to the scenery of the day, finally…  Well, today was even better than yesterday.  I’m probably not getting as many photos now as there are so many distant snow capped mountains that they are almost, dare I say, ho-hum.  I’m sure that my senior editor will disagree with me but adrenaline rush of the bear area and the grouse and the beaver, I didn’t stop near as many times to try to figure out the light of the perfect mountain shot.  Still I did get a few – see below. 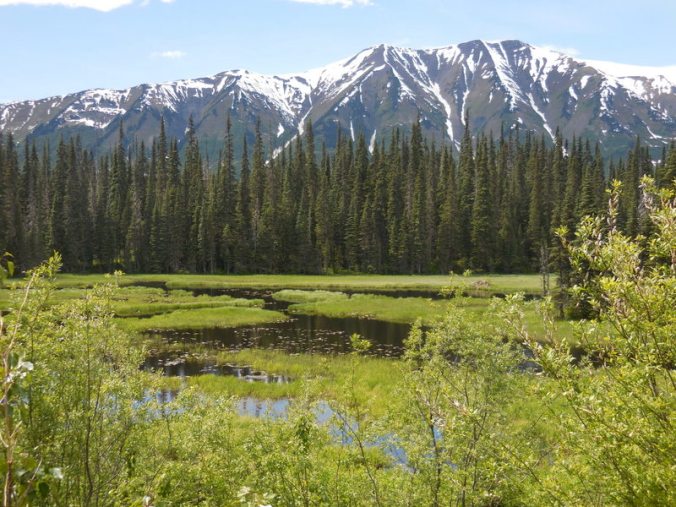 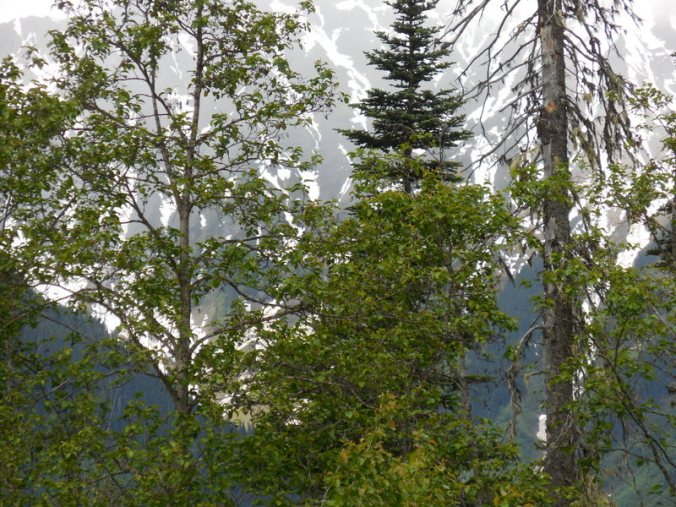 We had our first flat of the trip today, but only because at a rest stop I decided to check the air in my front tire.  I pulled the value right out of the wheel and all the air rushed out – whoops.  I couldn’t fine the value on the ground so I just swapped the tube.  It was pretty quick and except for the bugs, not all that difficult – we are getting more mozzies and the like now as we get warmer weather and further south.

First flat of the trip

We toyed with staying at the Inn at Meziadin Junction – we both could use a rest day and a day out of the tent.  That didn’t really pan out however as the inn turned out to be converted shipping containers left over from the big power line build project.  It would have been “an experience” but I have to be careful of the number of times I push the senior editor on the “experience” side of things, especially with lodging.

So we ended up at Meziadin Lake.  It really is a nice spot with campsites right on the water.  It’s also pretty clear that summer is coming as there as quite a few caravans here today.  Many looked like they were here for the weekend – not just the late afternoon fill up that we see at the highway RV parks. 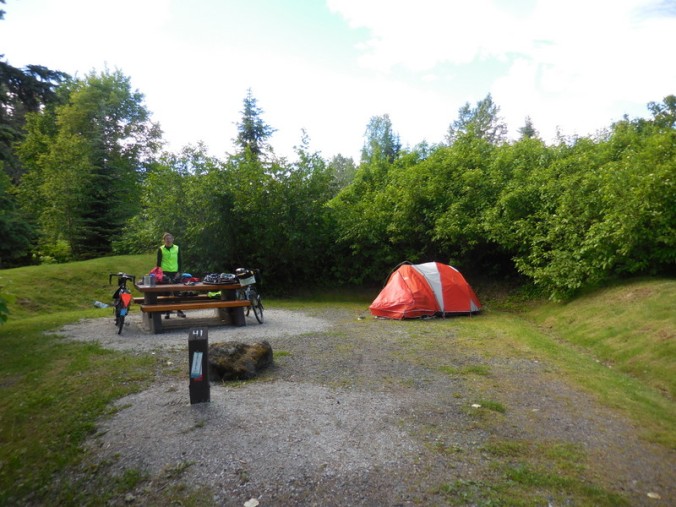 Campsite in the sun

Washing in the lake

Tomorrow is a short day to Bonus Lake – not much there and no cafes along the way for a coffee stop. Maybe we’ll get in early enough that I can get the Aeropress out for a lunch time brew.  Forecast is for sun and temps in the 70s.  The weatherman is telling us that for now, the snow will stay up north – fine by us.