It rained a lot overnight but we’d slept so much that I was awake at 5AM ready to get out of the tent, and it wasn’t raining.  I decided to wait until 5:45 so as not to upset my tent mate too much.  Well, on cue, at 5:45 it started to rain again.  I got up anyway, to my tent mate’s protests.  It mostly stopped shortly after but we didn’t get moving really until 6:30 – we then set a pack up/eat brekkie record and we hit the road at 8AM.  We knew we were in for a long day.

We had headwinds and clouds all morning.  The nearby peaks, of which there are many, danced with clouds – just giving us glimpse of them as we rode.  The snow level was pretty low as evidenced by snow line in trees.  We wore our warmest coats, long finger gloves and booties – and we were not hot riding. 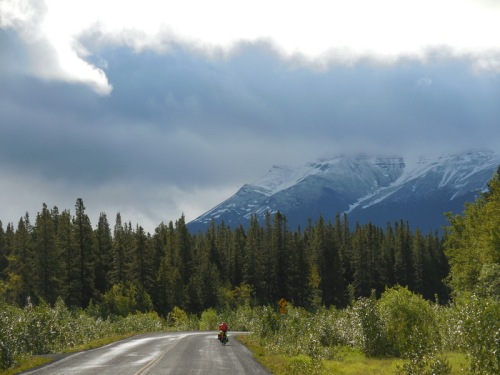 We didn’t stop much, just putting our heads down and grinding.  Of course, I tried to sneak in too many stops to grab that perfect peek in the clouds photo.  We had read about a massive 10% downhill, followed by a 7% uphill.  As we reached the downhill our first major squall came through. We rode down a 10% hill in a driving rainstorm.  It may have hailed on us, though it was hard to tell.  Either way it felt like we were being blasted with BB pellets.  We were both glad to see the sun and uphill – not too often that you want a downhill to end and become an uphill – today we did.  At one point Nancy finally convinced me we should stop and put our rainpants on, as it was really starting to come down and the skies ahead were dark so it looked like we were in for a long bit of rainy weather.  Well, less than 15 minutes later the rain had stopped and we were both starting to sweat under our rainpants, so we stopped again and took them off.

I really overdosed on mountain photos today.  Even though it rained on and off, there were enough off moments to get some great shots.  Below is all I’m allowed to post (today). 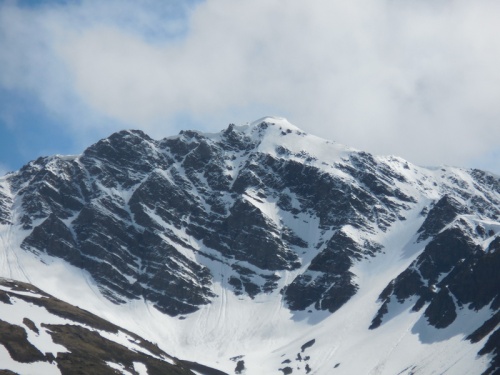 There is a relatively new power line along the Cassiar now, from south somewhere to Iskut. It is a massive infrastructure project, according to the Ministry of Transport folks we talked to yesterday  – and funnily enough, seems to end right now at a gold mine.  There are not many people up this way, but it seems like it would be useful if the grid continued up the Cassiar and along the Alcan, to help all those folks who are trying to make a living up that way.

New power infrastructure on the Cassiar

The afternoon really was a grind but at least we managed to pick up one of localized tailwinds which made the last bits less difficult.  It was a good thing as we were both flagging.  We didn’t really eat enough but there was no food in route and our lunch bread right now is only tortillas.  It was one of those days where you couldn’t quite tell where the road was headed.  We often seemed to be headed right toward what looked like a massive rainstorm, and then the road would turn and we would skirt it and even be in the sunshine for a minute.

Funny sign, but a bit scary in the rain

Toward the very end we seemed to be heading right toward a big bank of mountains and we were both thinking that perhaps there was a big climb ahead.  Then we made a turn and started riding through a beautiful canyon, along the Ningunsaw River.  Great scenery, the sun was peeking out from behind the clouds and we all of the sudden had a tailwind!

We had one summit sign today – Ningunsaw Summit.  Weird summit as we climbed for another 5-8k after the summit.  From there it was more down than up.  I was now, at senior editor’s direction, stopping for photos of columbine flowers – they are in bloom in the mountains now.  So much for stopping too much for photos.  (Editor’s note – okay, one picture of flowers, 120 pictures of mountains, clearly not the same thing.)

We finally rolled into Bell 2 at 4PM.  We have a nice camp site, have eaten great meals in their fancy lodge and are now getting laundry done.  It is only supposed to be 8 degrees tomorrow and rainy  – we are not sure if we are staying over or pushing on.  Discussions on that to follow.

Bell 2 Lodge (we are camping, in their campground)