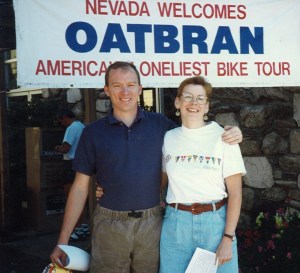 Our first day on the road begins with photographs in front of Harrah’s Pony Express Rider.  We were on the road by 8:30, riding along the rim of Lake Tahoe to Spooner Summit (7,149 feet).   The climb was not too bad being early in the day and starting pretty high already at lake level.  The ride down was great, new pavement, smooth turns and no brakes.  Dave remembered riding behind his friend Pete down this road in 1976.  Maybe it was his youth or perhaps lack of a good bike but he remembered being on his brakes the whole way down.

We met Dave’s Mom and sister at the rest stop in Carson City (his hometown) then road onto Dayton.  Dave wanted to stop at the “cat houses” but I told him that we did not have time.  We had lunch in Dayton, with the winds building from the west (just like every day growing up, Dave said).

There were lots of new homes sitting out in the dirt/desert.  With all the wind and dirt, I’m not sure why you would live there but somebody thought it was a good idea.  There was one more checkpoint before Fallon.  We managed 22 MPH in the wind into Fallon.  We are staying at the fairgrounds, hot showers, some grass and trees for a wind break.  For dinner we were served by the local 4-H, not bad and a good cause.

So far Highway 50, America’s Loneliest Road, is anything but lonely.  This was to be expected as there are a lot of towns until Fallon.  From here on it is supposed to get a lot quieter.  We’ll see.

This was the big day! Up at 5:45 for breakfast burritos from the 4-H crew and left camp at 7AM. We were told that there were five climbs this day but the first 20 miles were flat, alkali desert and an Air Force bomb range to boot.  The first check point was at Middle Gate, a bar in the middle of nowhere, actually running off generator power.  The bar had thousands of $1 notes stuck to the ceiling, something about never being broke.

Lunch was at Cold Springs (there was a surprise birthday cake for Steve – one of the fellow riders).  Then 20 miles to the top of New Pass, followed soon after by a climb to Aire Summit and then a 9 mile downhill.  In the subsequent valley we picked up a little headwind, so much for those winds from the west all the time.  The last climb up into Austin was hard with the wind and lots of miles in our legs already.

We are staying at the Austin City Park, showers in at the pool.  We walked into town for pre-dinner milkshakes.  In 1862, a Pony Express rider kicked over a rock and uncovered a rich silver vein. Within two years, nearly 10,000 people flocked to Austin, which produced over $50 million in silver. Some of the oldest buildings in the state are still standing, like the Stokes Castle, the International Hotel and the Gridley Store.  After our “tour” it was back to the park for spaghetti dinner.

Dave was great today, especially into the headwinds and he passed husband test by staying with me on the last climb.  We are now off to bed, though it looks like some of the crew is heading to town to hit the bars.

We had a great breakfast at the International Hotel, one of the oldest buildings in Nevada.  The riding started with a quick warm-up – the remaining climb up Austin Summit cresting at 7,484′, over Bob Scott Summit at 7,195′ and Hickison Summit at 6,546’.  On one of the downhills we hit 45 mph without pedaling. After the three climbs we rode mostly downhill, crossing wide-open valleys with vistas that go for 20 miles.  Almost all the way to Eureka, our stop for the night.  The last 10 miles were fantastic, with the westerly picking up pushing us into town, almost 30 mph at times.

A note about the rest stops should be made here.  There are no towns and no real rest stops on this highway.  All you find is the occasional “roadside garbage can”.  This would typically be our set-up for breaks.  Only trouble is no toilets.  So you have to head out in the sagebrush, which is not very tall.  Those “see for 20 mile” valleys are not so great during these moments.

We are staying at the Eureka school yard and again had showers at the pool.  We walked the town, got another milkshake and went through the museum.  In 1878, more than 9000 people resided in this mining community where lead was the principal product, making it the state’s second largest city.  Today, our group may had doubled the current size of the town.

Dinner was BBQ chicken and corn.  Somehow they forgot dessert, good thing we had the milkshake.  No one went out tonight, the passes are taking their toll.

Very cold start to the morning, down to 25 according the pool thermometer.   We had frost on the rainfly so I’m sure it was not far off.  Pancakes for breakfast and a few degrees warmer to start the ride.  Bike computers read 34, burrrr.  Today was another challenging day with four summits to cross. The first climb was up Pinto Summit at 7,350′; the second was up Pancake Summit at 6,492′; then Little Antelope Summit at 7,438′, all before lunch. We finished the day by climbing and descending the 7,539′ Robinson Summit into Ely.

In Ely we stayed again at the pool/park.  Showers were great.  After we got our tent set-up, they told us that we could sleep in the gym.  After the 25 last night, I guess some folks pleaded for mercy.  We took the tent down quite happily.

We walked though town and tried to find Dave’s old street.  No luck on the street but we did get another milkshake.  Dave called his Mom and was told that his Dad caught a fish up in Oregon.  First one he caught and netted by himself – after 30+ days of fishing, or something!

Dinner was full turkey dinner with potatoes and gravy + brownies for dessert.  It is supposed to reach 20 tonight, cold start in the morning.  Ely is the eastern gateway to “Loneliest Road in America”, but we’re not stopping here.  We are riding tomorrow all the way to the Utah state line.

Only 32 in the morning, “banana belt” Dave kept saying.  We had breakfast at the Elks Club.  Funny, lots of big elk heads round the room, then a doe over the kitchen door, good one guys.  We rode back up to Dave’s old house (his mother gave him the address) and took photos with him standing in front.

We departed Ely riding out past the old charcoal ovens and then climbed over Conner Pass at 7,733′, the highest point of the trip.  We had a seemingly short downhill then a long 12 mile climb over Sacramento Pass at 7,136′.  Lunch at the top with views of Wheeler Peak was great.  After lunch it was all downhill to the Nevada/Utah border.  Dave pulled the whole way except for the last 50 meters where I pipped him on the line.  After a group picture at the Border Inn, we had showers and piled into back of the gear truck.  We were staying Baker but first were off to see Lehman Caves.  I’m not sure how legal the ride to the caves was but the caves were interesting.

After a bumpy ride back to Baker, we set up tents at the Baker Ranch.  Dinner was at the Baker school, really good homemade cooking and great cookies for dessert.  We hit town, the one store, bigger than you’d expect in such a small town.  We went to the Outlaw bar for a celebratory beer but were too tired last past 10:30.  The hard cores came back at 1:30, tripping over our tent and waking everyone up.

Day 7 The Return to Lake Tahoe by bus

Breakfast was early with homemade muffins, breads and eggs.  We plied into the vans for a long day driving back over what took us 6 days to ride.  We had lunch in Austin and made Lake Tahoe by 5PM.