Another big climbing day completed under relatively sunny skies – yahoo!  The hotel last night wasn’t one of our better ones – it was a bit noisy, mostly I think from the staff talking at the reception area which was just around the corner from our room.  And, the room could have used a good cleaning – sometimes it’s better just to not look too closely at things.  There’s not a lot of choice in the small burg of Chunchi so we could just be grateful for the hot shower.

We were up at 6:15 and ready to roll out the door about 7:30 when Sebastian, the Colombian cyclist we met yesterday, met us in the hallway to see if we had a tool that he could use to snip off the end of a new brake cable he needed to install.  Dave of course had such a tool, though it took him a few tries to find it in his bags.  After repacking and saying goodbye to Sebastian we headed back up to the PanAm to continue our route south. 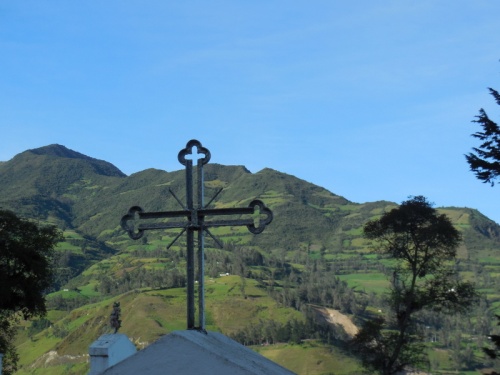 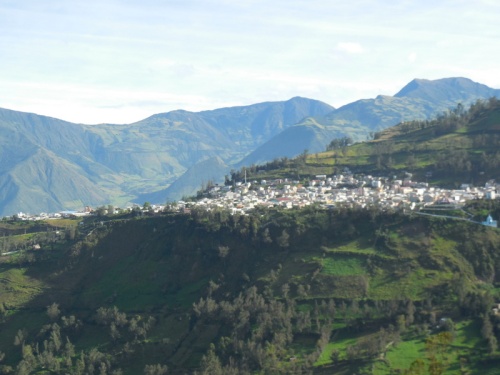 Well, I guess we did eventually end up south of where we started, but it sure seemed to be a circuitous route.  That seems to be what is required to make your way through the Ecuadorian Andes, following ridges that go along canyon walls and dropping down where possible to cross rivers or ravines just so that you can climb back up the other side.  We often can’t tell where the road is going as we make our way around the twisty turns, with cliffs surrounding us.  It is very stunning scenery though, especially when the sun is shining and the little villages across the canyons are lit up.  After riding almost 20k today we could still see Chunchi across canyons behind us.

I hope these views don’t ever get old 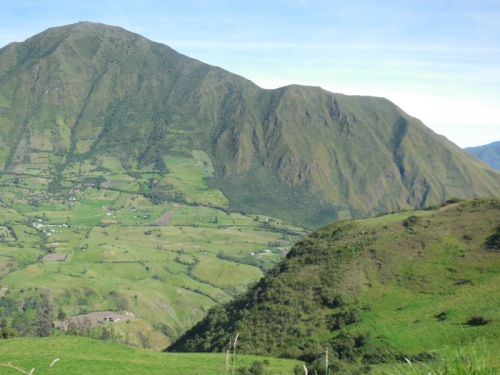 We had very little flat riding today – mostly up and down the whole day, with more up than down.  We counted 6 separate climbs of varying lengths, all of a decent grade that kept our pace slow but comfortable.  And we had lots of dogs again today – Dave is getting better with his rock-throwing skills.  We only had a couple that got close – thankfully almost all of them seemed to come at us on a downhill so we could outrun them.  We stopped when one particularly obnoxious dog came out of a driveway as we were climbing.  There were some people around so Dave was reluctant to throw a rock in case they took offense but one of the guys came running out yelling at the dog and picked up a rock and threw it at the dog.  We said thanks multiple times – I think he was a bit embarrassed about the whole thing but at least he was trying to do the right thing. 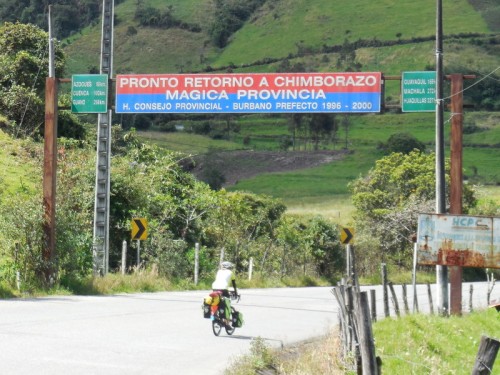 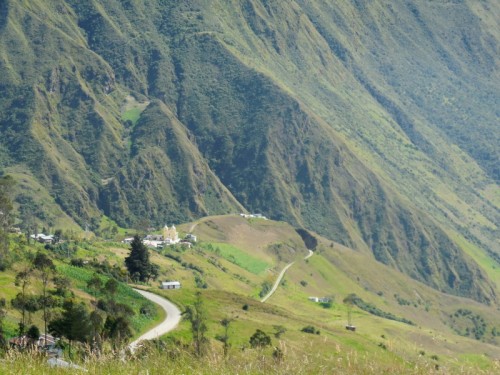 Small village/church down the hill 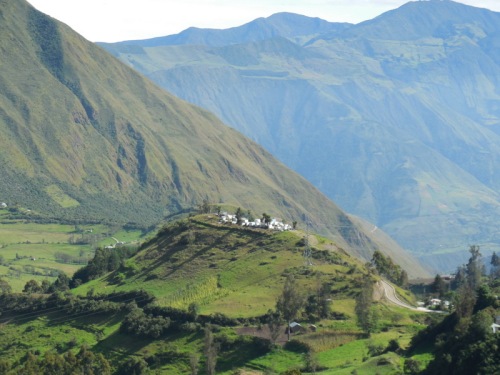 Cemetery with a view – those are crypts and tombstones

We stopped at the little town of Zhud at about 40k for a quick coffee and pan queso to refuel us for the remaining 20k.  Several small buses and vans stopped in the time we were there that appeared to be full of tourists – Zhud is the turn-off point to get down to Guayaquil, the largest city in Ecuador that is located near the coast and is the jumping off point for many of the Galapagos Island tours.  It was a bit odd to see so many ‘white’ people – we’ve gotten used to being the only non-Latino people in many of the towns we have stopped at so we found ourselves staring at them like all the Latino people stare at us!

We could see the fog rolling over the hills and down into the canyons as we rode the last 20k – it seemed like a bit of a race to see if we could get to our destination before the fog did.  Looking out over the hills you could see huge banks of clouds and fog filling the valleys – it looked like a white ocean with the tops of the mountains peeking out.  Many cyclists that have ridden this section have had very cold, foggy and rainy conditions so we felt pretty lucky to get through without too much problem. 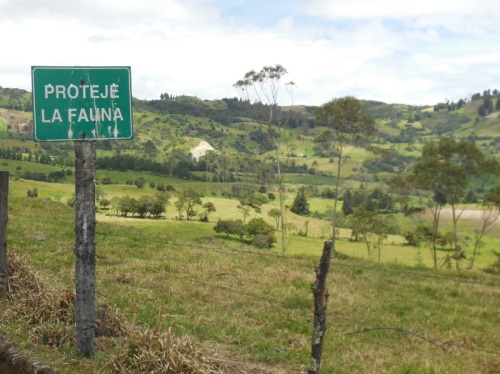 We haven’t seen any fauna other than birds, but the thought is good 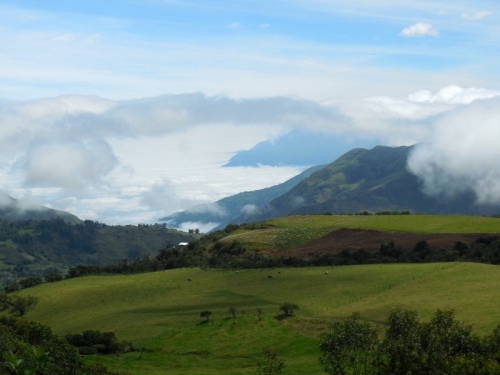 We estimated that the clouds below were hovering at about 1,000 meters.  The other clouds are gaining on us now as well.

We finally made it to El Tambo about 2pm and found our way to the Chasky Wasy Hostel.  It’s a funny little place but actually quite clean and so far pretty quiet.  We are not sure there is anyone else here.  We have a big room with a private bathroom, and Dave negotiated to have breakfast included so it’s not a bad deal for $30 a night.  The only downside is that our bikes have to stay downstairs but they are locked together and to the railing so hopefully all will be well (must not worry so much).  After we got cleaned up (oops, I might have stayed in a bit too long as Dave didn’t get a very long hot shower…) we went out to find some food and ended up at a little cafe by the train station that we had read about on some other cycling blogs.  Good food and inexpensive so we may end up there again tomorrow.  We stopped at a bakery on the way back for snacks (ie cookies) and then picked up some water at a store so we are set for the evening. 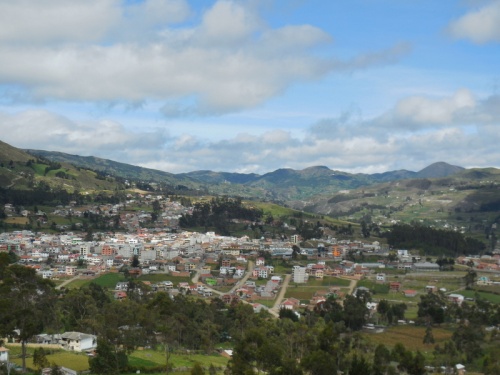 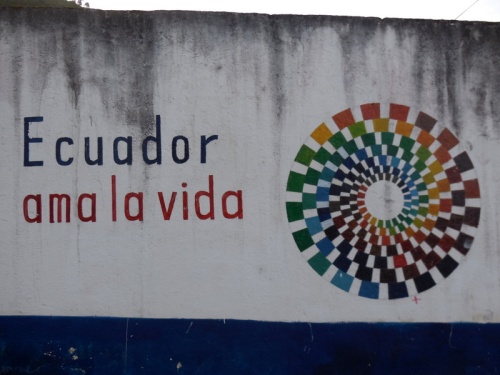 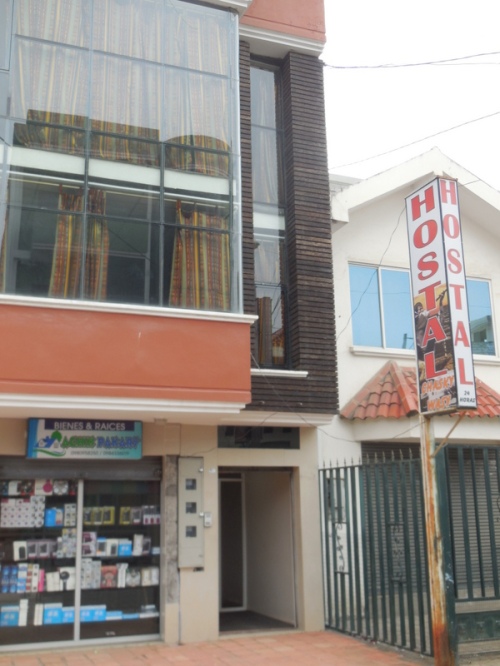 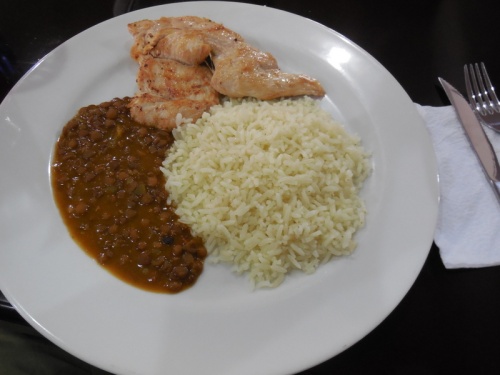 Blue (or white) plate special – came with soup and juice all for $4.  It was very good in spite having to eat chicken again. 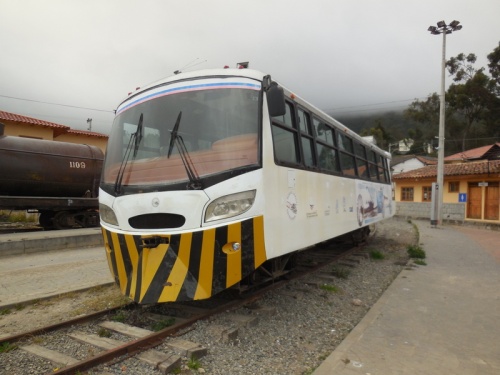 Tourist train in El Tambo – not sure if we’ll ride it tomorrow or not.

Tomorrow we have a day off here and will head up to the Ingapirca ruins, which are about a 30 minute bus ride from here.  Dave will tell you all about them in tomorrow’s blog, so stay tuned.