Well, the weather gods smiled on us today – no rain and mostly blue sky and sun, which meant we could clearly see all of the amazing landscape around us as we made our way to Chunchi from Guamote.  We got up a bit earlier this morning to give ourselves the best chance of making it and it was already clear skies when we left our hotel about 7:30.

The La Giralda Hotel in Guamote turned out to be a great little place – it was a bit noisy in the early evening but got very quiet later on and we both slept well.  I was a bit concerned about the bikes, as they had to stay downstairs locked up under a stairwell inside the lobby, but I needn’t have worried as they were fine.  The hotel is only 2 years old and is still in great condition, with lovely furnishings, nice thick towels, hardwood floors and a comfortable bed.  The little lady who was manning the front desk when we were there (dressed in traditional clothing including the hat) was also very sweet.  The whole thing just seemed a little out of place in that little village – I am not sure there was anyone else staying there while we were there.  Regardless, I am glad it was there and it was certainly much nicer than we expected.

The first 30k of today’s ride was a climb, but mostly a relatively gentle one.  The views were stunning and kept us distracted from the steeper bits of the climb.  We had a very steep downhill towards the town of Aluasi, our potential stop for the day.  It was only 10:30 when we reached the turn-off to down into the village, and with the blue skies and sun it was way too early to stop.  So, we stayed up on the Pan-Am and stopped at a little restaurant for a pan queso and coffee to keep us fuelled up.  Aluasi looked like a nice town – it is where folks catch the ‘Nariz del Diablo’ train, a railway famous for its use of switchbacks to make its way up the Andes.  The town sits on the edge of the Río Chanchán gorge and it is a steep descent to get into the town and, not surprisingly, to get back out of it.  We just viewed it from above, which was impressive enough for us, knowing we had some good climbing ahead.  We could easily see the big giant statue of St Peter that sits in the middle of town – it must be really massive standing much closer to it. 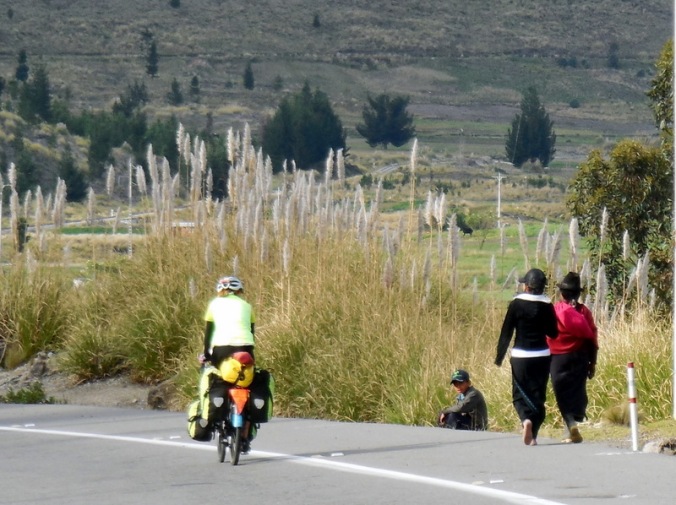 Some people wear the strangest things in public – you get to define strange in this photo! 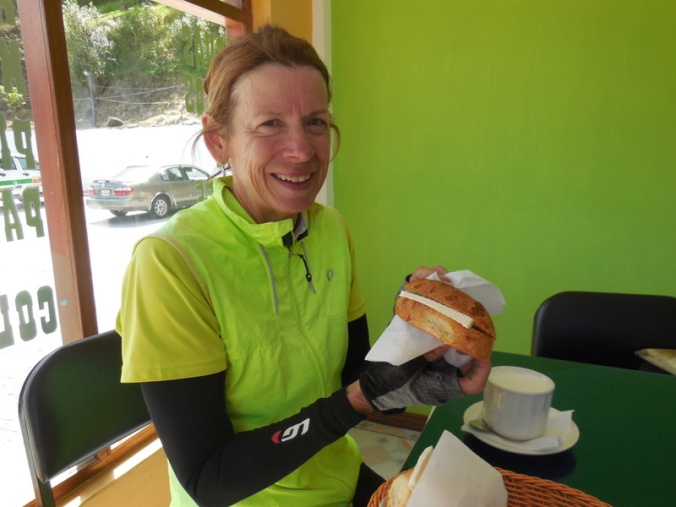 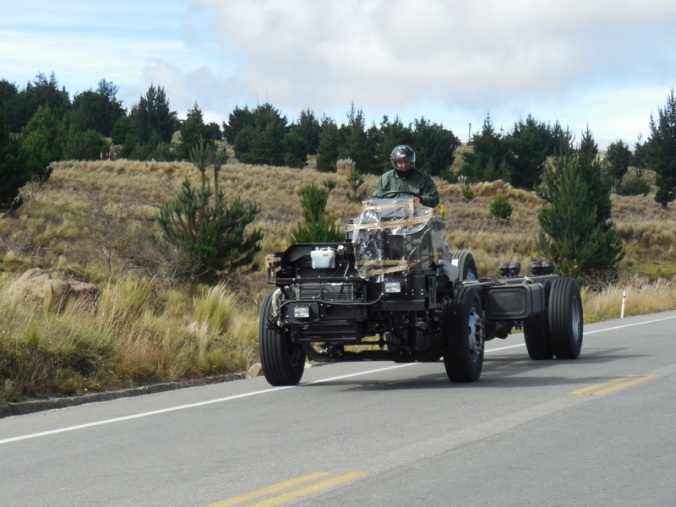 We’ve seen a lot of these – one at a time with drivers all rugged up.  There must be a factory somewhere.

The rest of the day was filled with some big ups and some downs, though they never feel quite as big as the ups.  Traffic was very light and there was a good shoulder almost the whole way, so we were free to take in the stunning views without too much worry.  Well, of course, other than paying attention to the dogs that continue to ‘greet’ us here in Ecuador.  They are so crazy and you really have to pay attention when you are anywhere near a house or where there are people nearby in fields, as the dogs come out of nowhere.  Thankfully they are usually barking so you do get some warning, but it is still a bit disconcerting to see these sometimes very large dogs come at you.  Dave usually yells ‘NO’ at them and they do often pause – though given the altitude Dave usually can only get one or two yells out before he is out of breath!

Kind of an overdose of Andes’s photos follows…

We climbed that road…

We didn’t climb that road, and yes, those are the real colors

Our road cuts through the gap on the mountain side 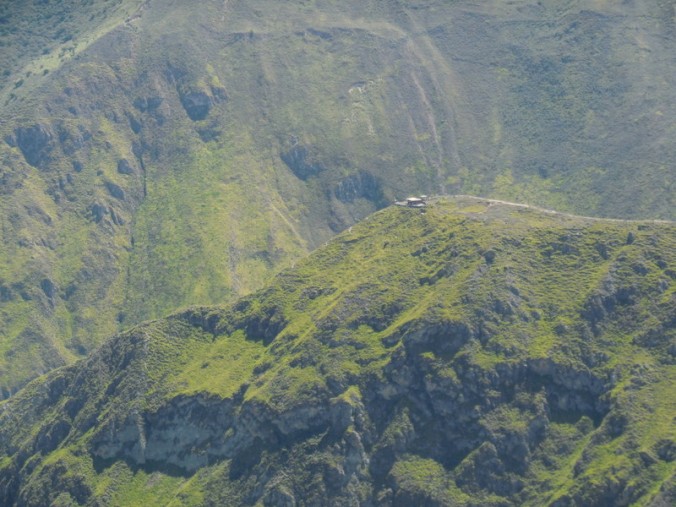 This house was at the end of an amazing ridge – with the road on top of the ridge.  Long ways to go for a pint of milk but the views would be amazing.

A flat (sort of) spot in the mountains 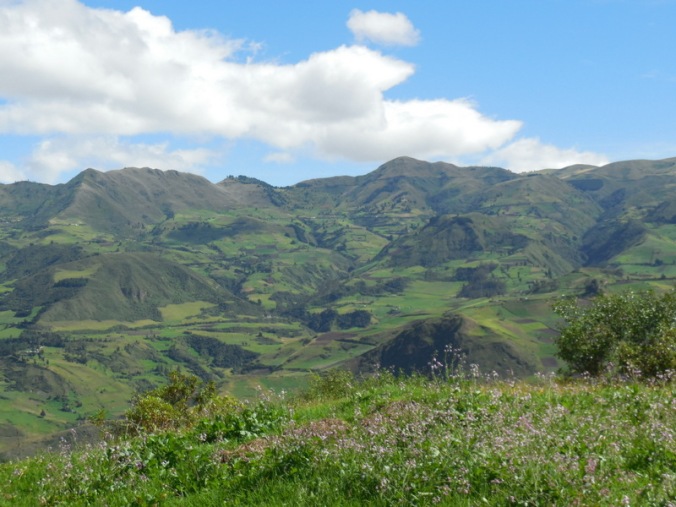 This was our day mostly – stunning

All of that is farmed by hand (or with animals)  Hard yakka.

Yet another village – with roads going every which way

We made it into Chunchi about 2pm and found the Chunchi Hotel Imperial, which several other cyclists have stayed at while making this same trip.  It is a step below yesterday’s place but is still okay – very hot water in the shower goes a long way in influencing our opinion on a hotel and this water was scalding!  Actually, we have the handicapped room, the only room on the ground floor which I expect will be a bit noisy tonight but oh well – you can’t expect much for $25.  This is the second time recently we’ve been given what is called a handicapped room but in both instances it would have been very hard for anyone handicapped to actually reach the room.  The first handicapped room was two flights up a very steep staircase, with another step up into the bathroom.  This room is not quite so bad, but there is a good step up into the hotel so it would be hard for someone in a wheelchair, for example, to get to.

We cleaned up and headed out to get supplies for tomorrow and then ended up at a Chinese restaurant right out on the main highway for an early dinner.  It was pretty tasty – we have been meaning to try a ‘chifa’ restaurant and this was our first chance (other than the nice one we went to in Quito with my sisters).  We are both now very stuffed, which I guess is good as we have a bit of a tough day tomorrow to get to El Tambo – 5400 ft of climbing over 60k – so we need the calories.  While we were eating another touring cyclist rode by so I ran out to talk to him.  Sebastian is from Columbia and is riding back to his country after starting south in Patagonia.  We only had a chance to speak to him briefly but he did end up coming to this hotel so we may see him again or later in the morning. 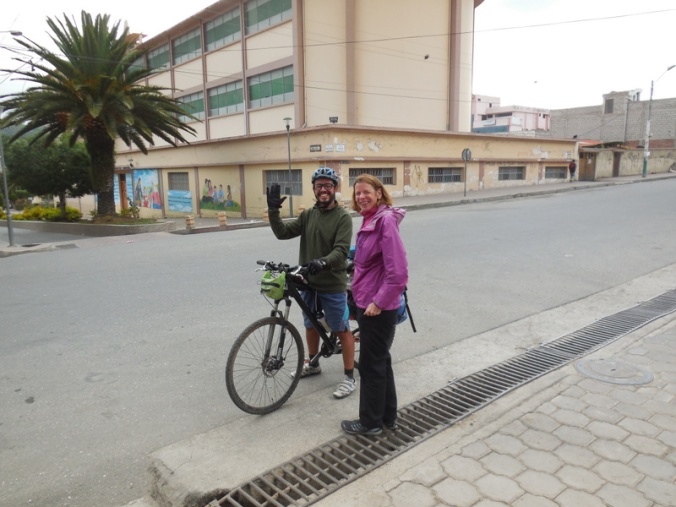 It’s only 6:30 now but I suspect we won’t last long tonight, between the ride today and the effects of the Chinese food.  We should study some more Spanish but… perhaps we’ll just veg out with an episode of one of the programs we downloaded.  We’ve been watching ‘Billions’ – it’s interesting but sure feels like another planet to the one we’ve been on the last year or so!

So, tomorrow it’s on to El Tambo where we plan to take a day off to see the Ingapirca ruins – the largest site of Inca ruins in Ecuador.  Hopefully the good weather will continue…