Today we visited the largest known Inca ruins in Ecuador – Ingapirca.  It is not strictly an Inca ruin as the Cañar people lived in the area before the Inca arrived.  Over time the Inca outnumbered the Cañar but they never really conquered them.  Instead the two groups decided to live together peacefully.  The Ingaprica site has clear influences of both groups.

Temple of the Sun – later in the morning after crowd arrived

The Inca worshiped the sun and their most significant building on the site is the Temple of the Sun.  The Cañari worshiped the moon but there wasn’t much left of the Temple of the Moon.  There is not much left of anything really, as the Spanish felt that the blocks used to build these sites would be better suited as the foundations for their many churches in the area.  So, in 1534, they started tearing down many of the ancient sites so that they could be repurposed.

Some of the buildings on the site are constructed without the use of mortar – as is the Inca way.  They basically chisel stones until they fit exactly the opening that they are trying to fill.  While the Inca discovered gold, silver and copper, they did not discover iron or bronze so all this fitting was done by banging two rocks together.  They figured out that some volcanic stones, such as obsidian could be sharpened and used to chip away on other materials.  Much like many other buildings of worship in the old world, the Temple of the Sun has slots that let sunlight through in just the right way only on the solstice and equinox.   How they figured this out with their limited technology is really beyond me. 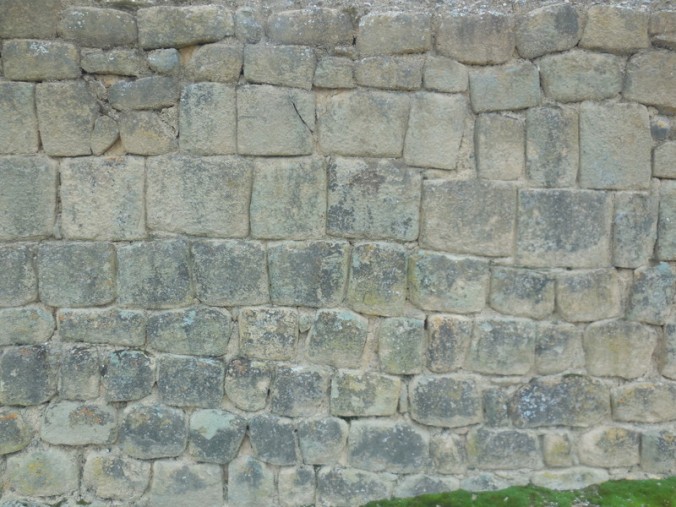 Typical wall – with some mortar

We arrived on site pretty early, taking the 8:30 bus from town ($0.50 each).  We were joined by two large groups of school kids that all wanted to practice their one word of English – hello.  The lady in the ticket office sort of took mercy on us getting us onto the site between the large groups of kids.  We had read that you are required to have a guide but the English speaking guide was about 2 hours from site, so after giving us a thorough overview using a site model, she snuck us in on our own.  I’m not sure if this was supposed happen but in meant we could stroll at our leisure.

It was a little misty but not so bad that we got wet.  When we entered the site, there was a flock of llama wandering.  They seemed to disappear later when the crowds got thicker.  The site is surprisingly small for the largest site in Ecuador.  We both wondered if there were more bits hiding under nearby farms – the farmers would be less than keen to give up good land for more tourists I suppose. 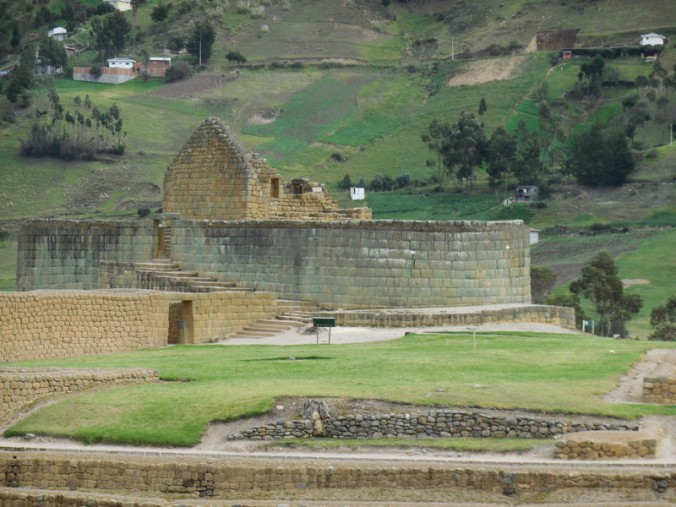 Site with Temple of the Sun 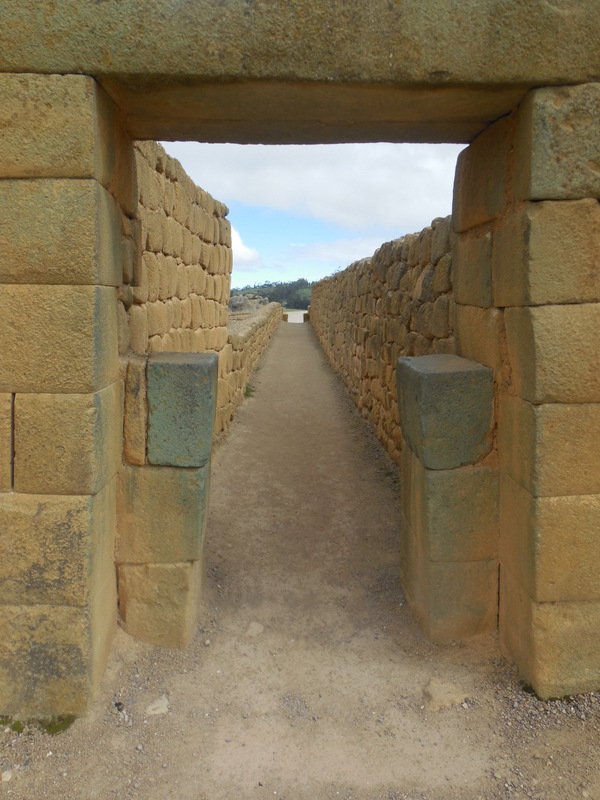 Inca door of the day number 1

More of the site 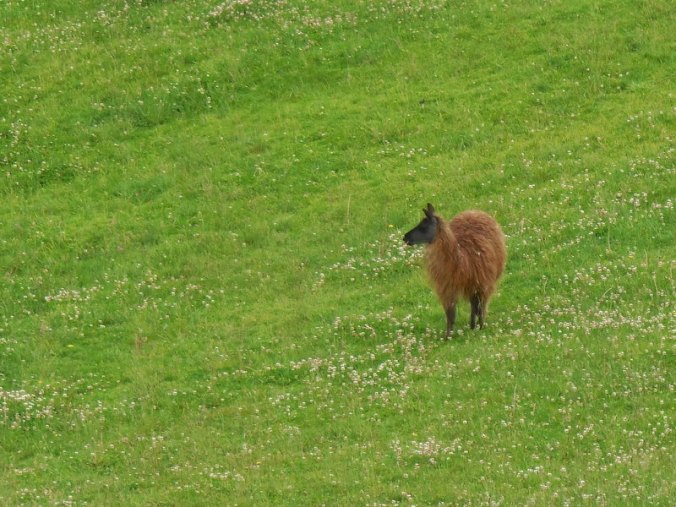 Inca door of the day number 2

After a walk about the site, we took the nearby scenic trail to see the Inca face, Sun rock and Inca chair.  All of them were interesting but there wasn’t a lot on them story wise.  Once done with the trail, we hit the onsite museum.  Everything was in Spanish but they had special English cards with translations of the information.  The museum was well done if not a little light on details.  Both of us felt that we only scratched the surface of the Inca and know even less of the Cañar.  Overall, however, it was worthwhile visiting Ingapirca, and certainly well worth the $2 each admission charge. 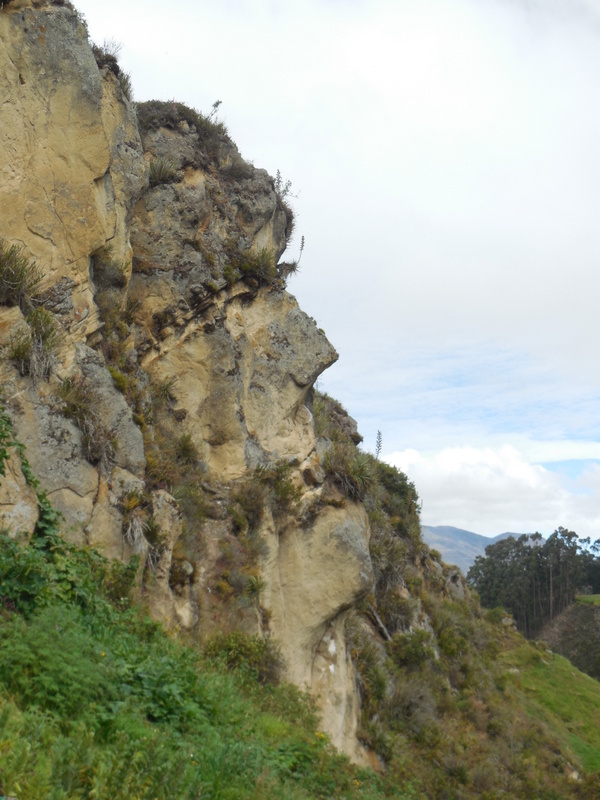 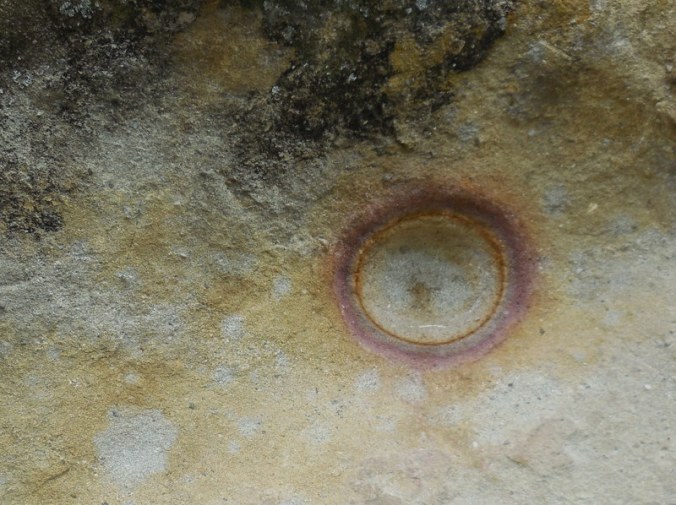 Tomorrow we ride to Cuenca, the third largest city in Ecuador.  We’ll take a few days off there as it has UNESCO listing and reportedly a good deal to see.  Nancy found us a hotel right in the middle of old-town so we should have good access to all the sites.

Older woman sitting looking down at the site

Cows eating crop circle near Ingapirca – the farmer in the middle moved the cows one by one, they are tethered