The night in our tiny hotel room was surprisingly quiet and the trip across the hallway to the bathroom in the middle of the night wasn’t too bad.  We were up early to try to get out of town before traffic picked up too much and we were riding by 8:00.

Well, we were riding, kind of – more like pushing, really.  From our hotel we had to make our way up some very steep roads with the ubiquitous cobblestone – very tough cobblestone.  We both ended up pushing the bikes up some of the streets and even that was really hard work.  Trying to push while keeping a hand on the brake lever to stop the backward slide – my arms and legs were burning by the time we got up to the top.  It was so nice to get to the main road up above the city – even though it was flagstone it was at least ride-able.  I think it took us close to 30 minutes to go about a kilometre – thank goodness the rest of the day wasn’t like that or we would still be out there for many hours (Junior editor’s note: I calculated that it would take us 132 hours to reach Queretaro – I shared this with Nancy at the time – she did not laugh)! 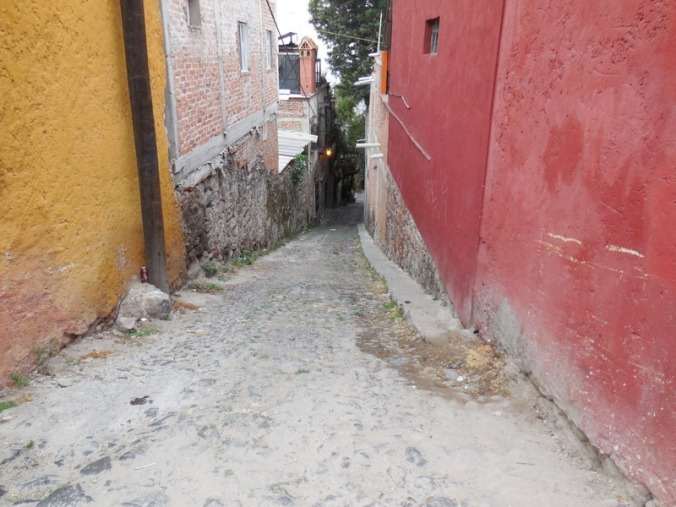 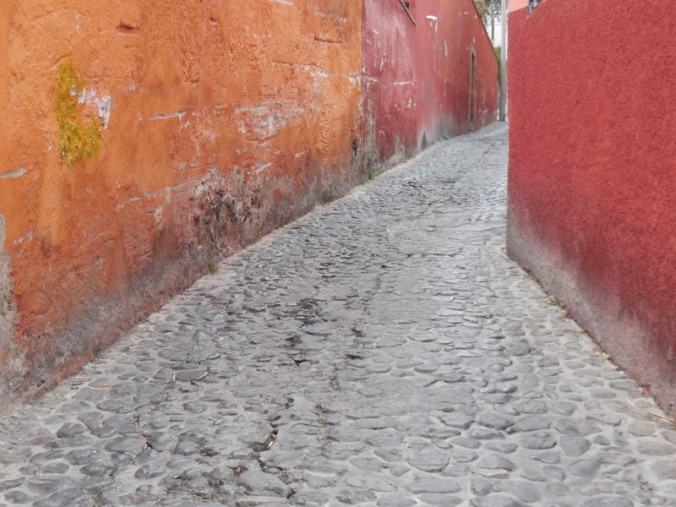 And here – this was one way, coming towards us.

View from the top was nice

Once we left the city proper we had pretty smooth riding through farmlands and small villages for the next 30k or so, along Highway 111.  There was quite a bit of fog about, which made it a bit chilly but we were still warm from our initial kilometre so we were not too cold.  We did turn on our blinking helmet lights for safety – those plus our bright jerseys and vest made us pretty visible.  We crossed a state border toward the end of this road, leaving the state of Guanajuato and entering the state of Querétaro – our eight state in Mexico.

Maria and her bike 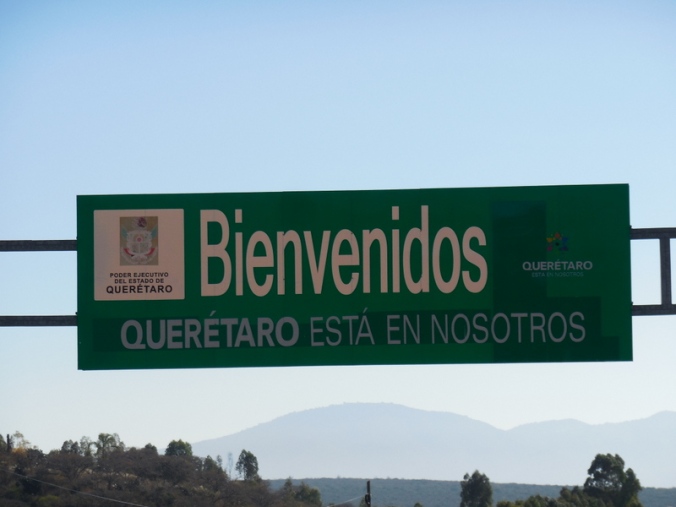 After the relative calm of the middle part of the ride we hit another exciting section once Hwy 111 ended and we turned onto Hwy 57, the main highway into the city Querétaro.  Lots of traffic, lots of construction – all a bit of sensory overload after the farmlands we’d just come through.  We stopped at a convenience store just at the start of the highway and had some cold drinks (and some hot noodles!) to fortify us for the rest of the ride into the city.  This city has over 600,000 people and it is really spread out so it seemed like we were riding through it for the last 30k. 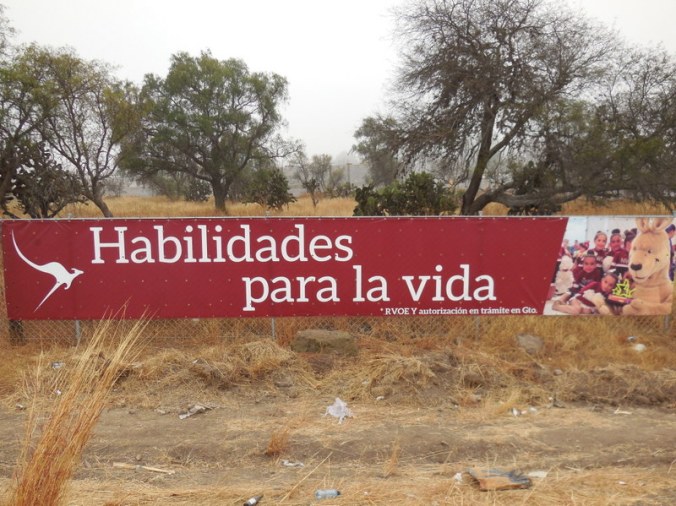 Seen out on the road – kangaroos everywhere!

There were some side roads along the highway but we couldn’t tell whether they went through so we stayed on the main highway for most of the way.  As we got closer to the city center I convinced Dave to go over to the side road, as it felt like we were stuck out in the middle of a major freeway.  We spotted a Starbucks and pulled in for a coffee and a chance to catch our breath and take a look at our options to get to the center of town.  After a short break and suitably refreshed (and failing to convince Dave that we could just stay at the hotel that was right there, next to the mall with the Starbucks and many other restaurants) we headed off toward the center (Junior editor’s note:  What fun is it staying at a business hotel at a mall and eating at Red Lobster – both of us did that more than enough in our professional lives – we’re on an adventure now!).

The rest of the ride into the center went smoothly.  We made our way to one of the many squares where we had some potential hotels picked out.  The first one was okay but Dave went on a bit of a search to see if he could find something better while I sat with the bikes.  After 20 minutes or so he returned with news that he had found a nicer hotel around the corner so off we went to the Hotel Mesón Santa Clara.  The room was about the same price and it is very nice – bright and cheerful, very hot shower, with a hair dryer!  And, the room is big enough for the bikes and it’s on the ground floor so we just rolled them in.  Sometimes you win, sometimes you lose – today we win.

Our room – thumbs up 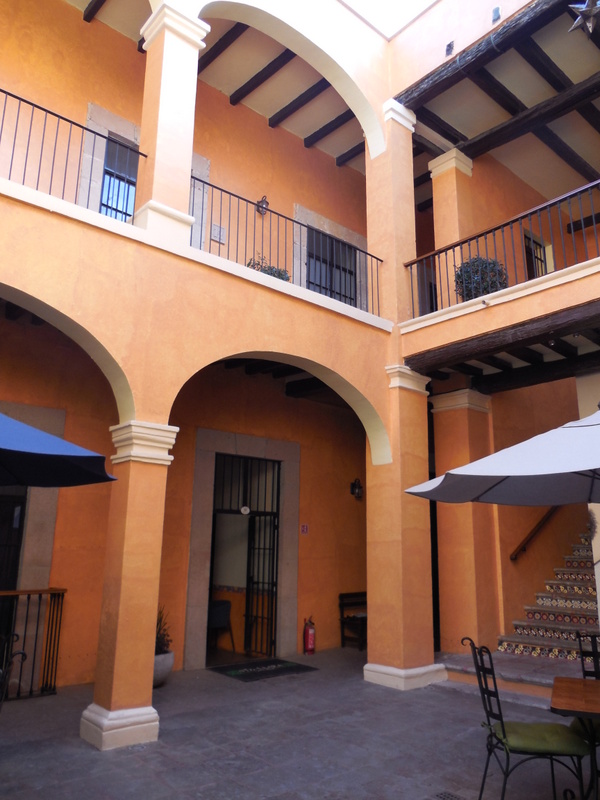 We are off to get some dinner now.  We are debating how far we go tomorrow – we may stop at a town about 65k from here or keep going on to another town that is about 100k.  We’ll see how we feel in the morning.  Temperatures are forecast to be a bit lower over the next couple of days but hopefully we’ll miss the rain.

Photos below from Dave’s wander of Queretaro this arvo… 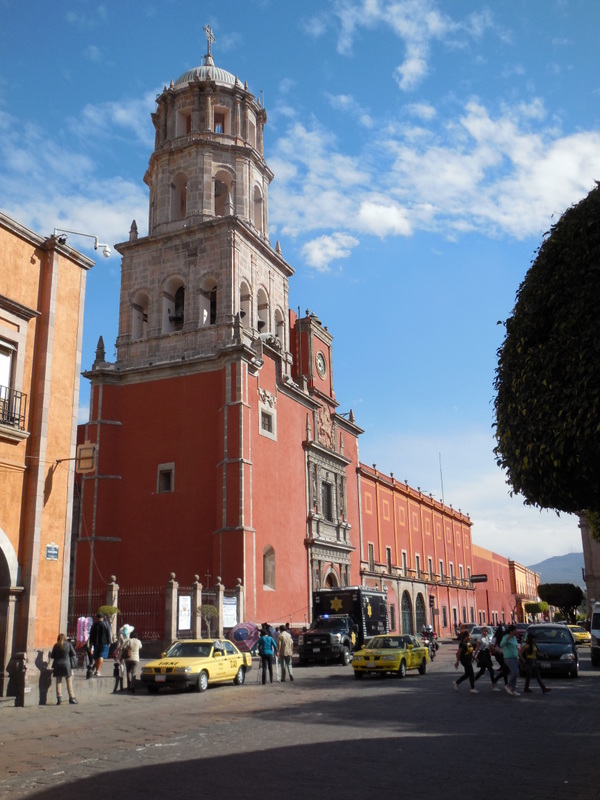 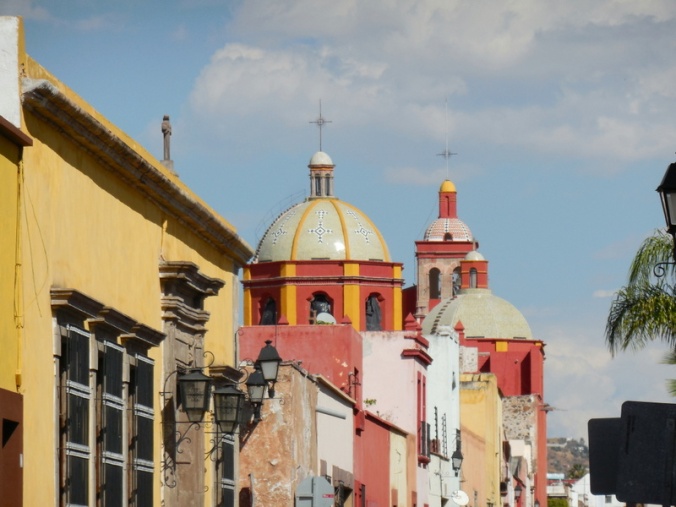