Good hard day of riding today.  We only did 26 miles but there was over 4,200 feet of climbing and we are not in perfect riding shape yet.  It took us 6 hours to cover the distance, probably a slow record for anyone doing 40k.  Sometime during the day, I remembered that “back in the day”, I rode a 56 minute 40k time trail (bike race).   Nancy humoured me by laughing when I told her this mostly irrelevant fact today while we were plodding at 6 KPH on a steep section. 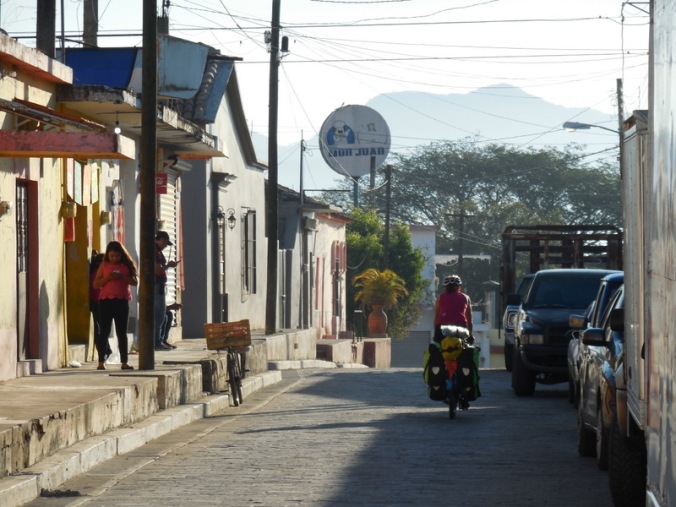 Last night’s King Day festivities when on until at least 3:30AM.  It was clearly not the kids but rather some locals belting out traditional Mexican songs.  The noise sort of came and went so we managed to get some sleep – the 3:30AM wake up song was still fondly remembered this morning.

We had few up and down K’s at the start of the day but from about 10k onwards it was pretty much all up.  Going up into the mountains meant that we got to see a huge variety of plant life as we rode.  In the morning we had banana and papaya trees, plus some really odd trees with weird spiky bark and fruit coming out of the trunk.  There were also a couple flowering trees that had no leaves, only flowers.  By the end of the day we were in the pine trees and any thought of tropical plants a distant memory.

We saw a lot of birds out as well, mostly in the morning.  Pretty early in the day we saw a Chara Pinta – probably the most famous of the birds in these parts.  As luck would have it, the bird we saw was more than happy to hang out while I snapped a few photos so that I didn’t have to worry about that all day.  Lower down we saw a good number of odd hanging ball like bird nests.  We never managed to see one from all sides so we are not sure how the birds get in and out.  Budding birders may jump in at any point here and tell us more about these nests and the birds that use them. 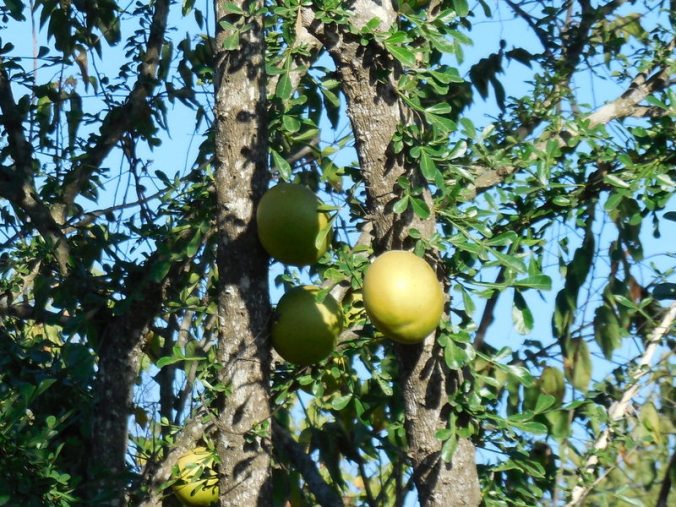 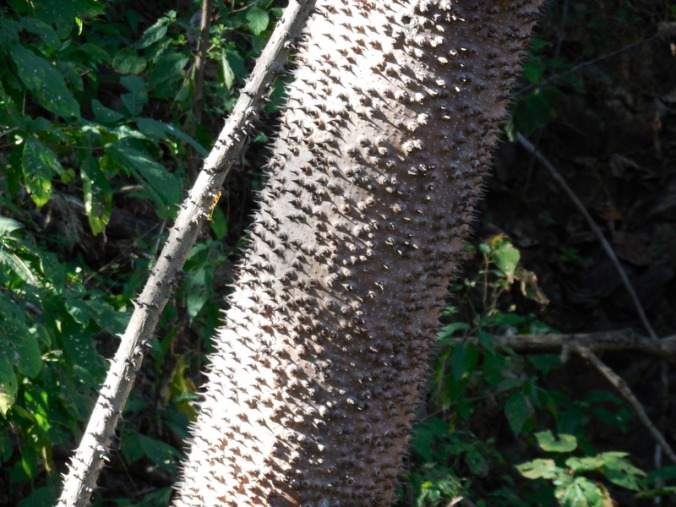 An easy tree to climb, if you don’t mind pain 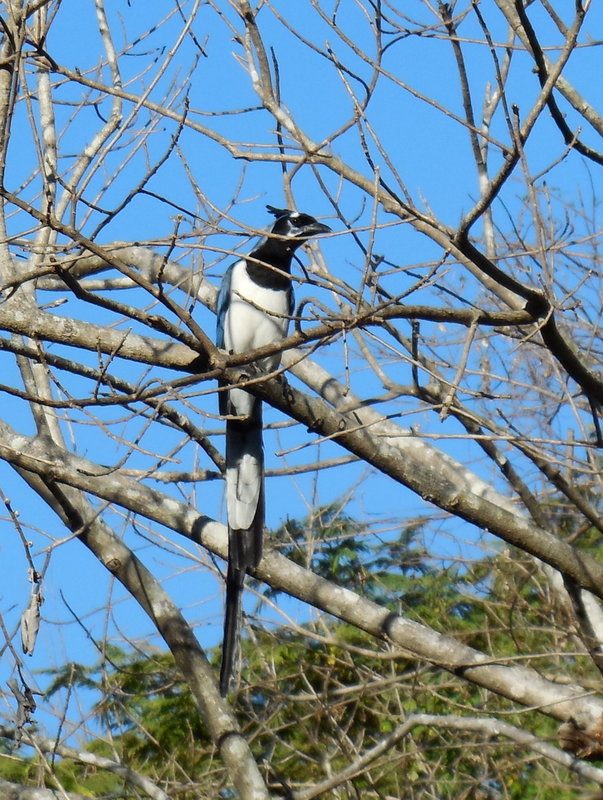 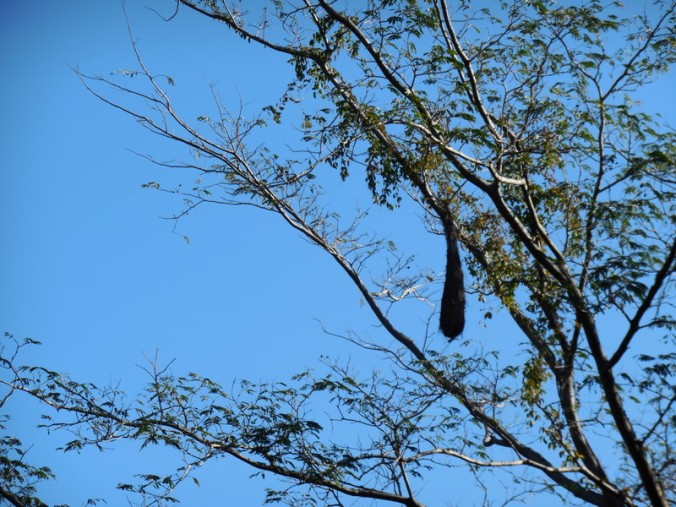 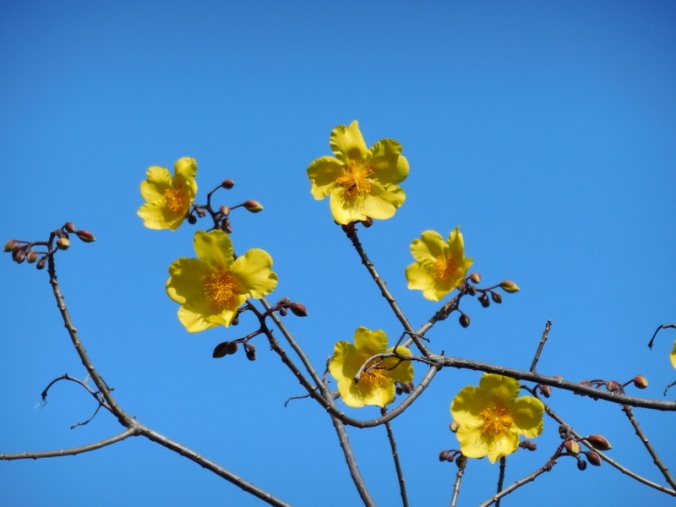 No leaves, just flowers on this tree 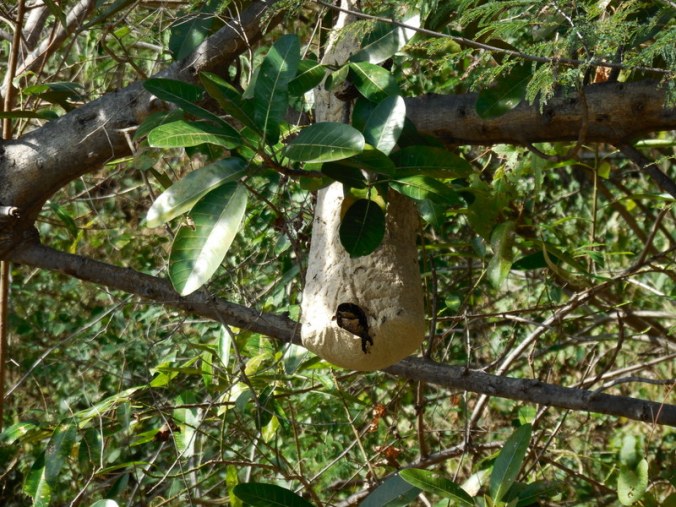 Traffic on the road was very light – almost none really.  There doesn’t appear to be any access to or from the new motorway so it would seen once you make a choice of which road to take, you’re stuck with it.  We crossed over and back the motorway a few times today, once riding over a hill where it clearly went through a tunnel – we got bonus climbing for that one.  From what we could see of the motorway, there is more traffic but not a lot.  And the tunnels we saw have a good shoulder.  So it would not be a bad route if you can manage the food and/or lack of services.

Most of the route would be best described at light jungle so we didn’t get too many distant mountain views.  The ones we got were really nice.  It is supposed to get more scenic as we climb – perhaps that will distract us from the pain we’ve been feeling in our legs, a little.

Distant mountains for the Sierra Madre 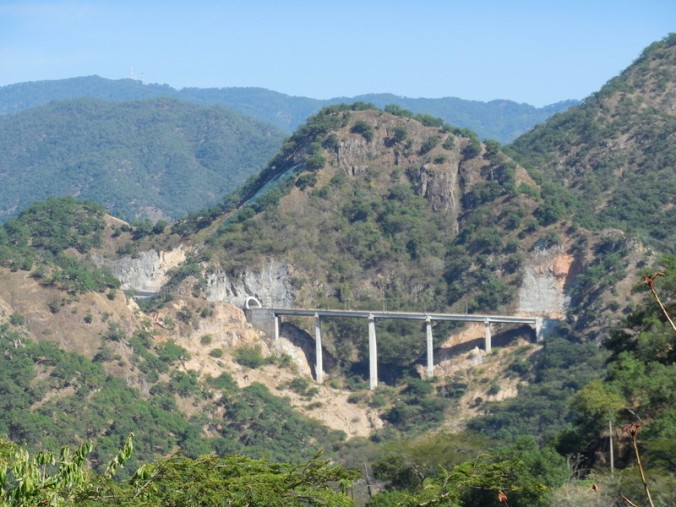 The new road below us 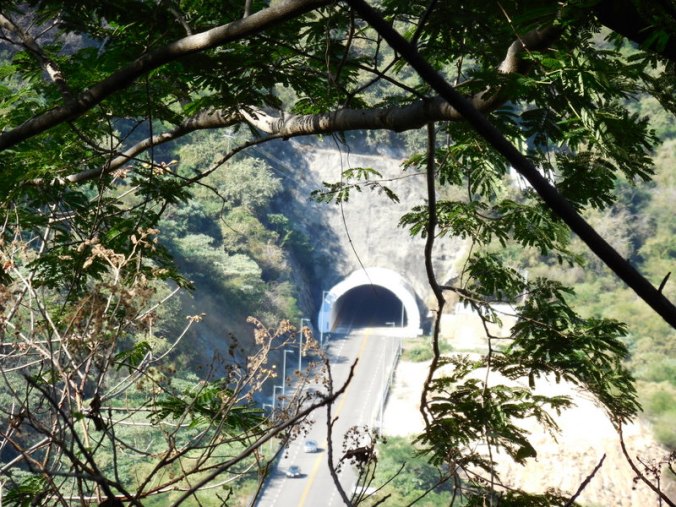 More new road, not much traffic

We had one stop for drinks at a town that is not on our map and may not have had a name.  It was more collection of houses than a proper town – but we were happy that the little shop had cold drinks all the same.  We have really entered the back country now so anything we find is good news to us.

We made it to La Capilla del Taxte around 2PM and headed for a restaurant that we’d heard about.  We were not sure about eating but needed a cold drink.  We arrived to find them closed.  The owner, a nice Mexican woman, was there but she was heading to Mazatlan tomorrow and not cooking or serving today.  We really needed water and were not overly excited when she offered that we ride up the mountain 3 more K to reach a store.  I think she could tell by the looks on our faces that we needed a hand.  She called Senor Fredi – the owner of our hotel and got him to agree to stop at the store to pick us up some water.  This actually worked out perfect as we may not have found Senor Fredi otherwise.

Senor Fredi showed up with water about 10 minutes later and escorted us to his hotel – the Hotel Villa Blanca.  The hotel is not fancy but it will do.  Once the water heater was turned on, we got hot showers.  There is no WiFi but the smell of pines is nice and it is really quiet.  While we were getting checked in I touring spotted a cyclist going up the hill and ran down to meet another Martijn from Germany.  He started in Whitehorse Canada in August and is heading to the bottom like us.  He was going to push on up the mountain today but I’m sure that we’ll see him again.  We are on about the same schedule if we hadn’t stopped to study in La Paz. 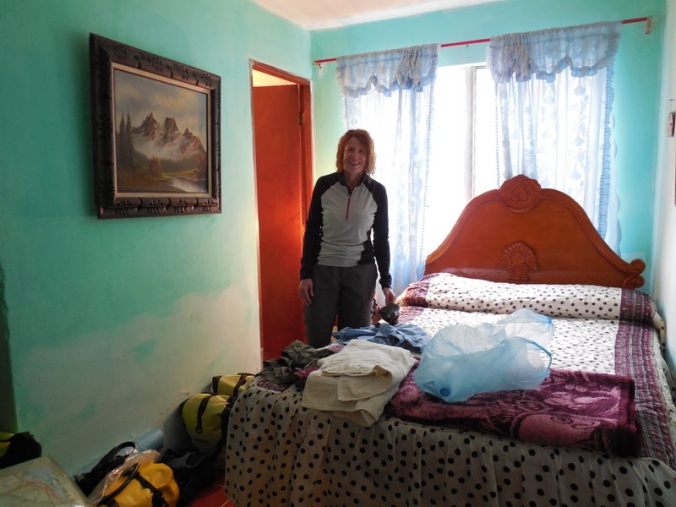 Actually, this town does not appear on Google maps but we knew from other cyclists that there were some limited services here, including a hotel.  The hotel and the restaurant do appear on Google maps, and our new friend from the cafe in Concordia had called for us to confirm that the hotel was open so we knew at least we should have a place to rest our weary bones.

It’s getting on to dinner time so I’ll stop there.  We are both tired and thinking about tomorrow.  We have about the same amount of climbing tomorrow, in a shorter distance.  That should just about get us to the top of the Sierra Madre Occidental Mountains.  We’ll have another couple days riding in them before reaching Durango.  I think the Devil’s Backbone -the famous road that we mentioned yesterday – technically starts the day after tomorrow.  So really, as scenic as today was, it was just a tease of what’s to come – the pain may just be worth it. 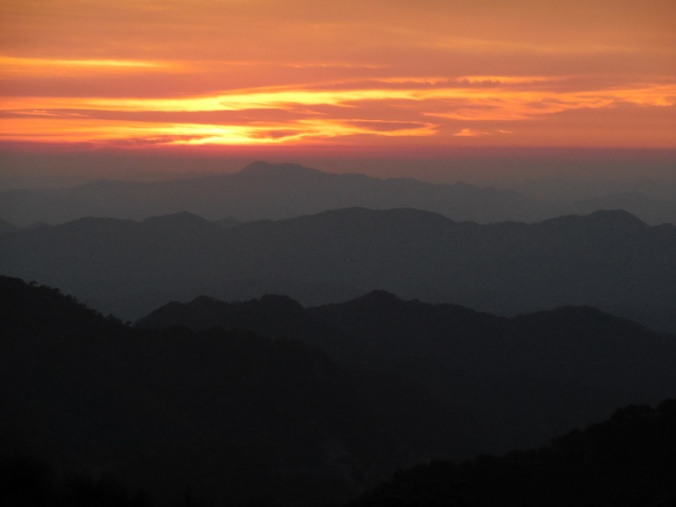 Sunset over the Sierra Madres