We’ve made it to Port Hardy.  We had a scenic long day yesterday out on the Inland Passage.  We left the hostel at 5:10, were ticketed and on the ferry at 6:30, sailed at 7:30 and finally docked in Port Hardy at 11PM.  We rode 6k from the ferry to our campsite – in the dark.  By the time we got the tent up and were horizontal, it was about 12:30 – tired but happy to be finally on Vancouver Island.

We rode to the ferry in Prince Rupert really early but didn’t need lights as we were still so far north that it doesn’t get dark overnight.  We were ready for the change in light when we arrived in Port Hardy and had our lights mounted and ready for the ride to our campsite.  Our lights are OK but we were very happy with the performance of our high-vis Ortlieb panniers.  Nancy rode behind me and commented several times about how visible I was with only her lights and how super visible I was when disembarking cars passed us and their lights hit us.  We were able to exit the ferry first, with the foot passengers, which was great for getting us to the campsite faster but it also meant the all the ferry traffic would be passing us in the dark.  It was great to know that we were so visible – and we even beat a few campervans to our campground.

Not so sure Nancy

So, back to the ferry…  We only paid for general admission seating but it worked out perfect.  We found two seats facing a floor to ceiling window   It took a little while to get used to sitting sideways, not looking forward but the view was fantastic.  We started the day in the shade, sitting on the starboard side out of the sun and slowly throughout the day watched the sun come up, melt away the clouds, shower our seats with sunshine and eventually become a great sunset over a near cloudless pacific.  It was cool sitting until the sun came over and almost too hot when it was hitting us directly.  I should have taken a photo every couple hours but didn’t get this idea until later – so all you get is the few photos below – life is good. 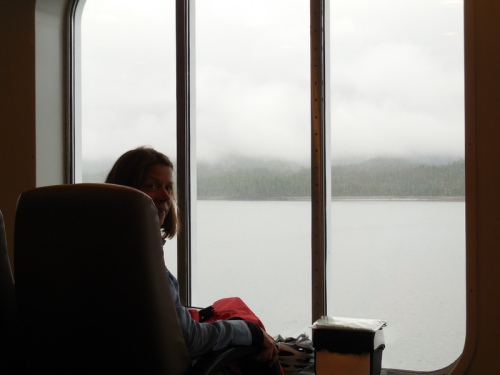 Our seats in the morning

It was not too bouncy until we got to the Queen Charlotte Sound, where there are no longer barrier islands to block the ocean swell.  Once in the sound, we had a few ooh-aah stomach flip moments and decided that it would be better to go outside and get some fresh air.  This only lasted for about 30 minutes before the water calmed down but we stayed on deck for longer as it was so nice out in the sun – though it was a little windy.

We saw porpoises and whales but really only barely saw them.  They were all pretty shy, either moving away from the boat quickly as we approached or jumping so far away that you could barely make them out.  Sorry, I didn’t get any photos of them.  Still, I managed a lot of photos throughout the day as I wandered the ship.  While I was wandering the deck taking them Nancy got to sit in our comfy chairs, check out the view and read her Kindle so she was happy.  Anyway, here goes a stack of them – sorry I don’t know the names of all the waterways and lighthouses.  I started taking notes but after 17 hours on the ferry, I kind of lost track.  Enjoy…

Kayak on the sound 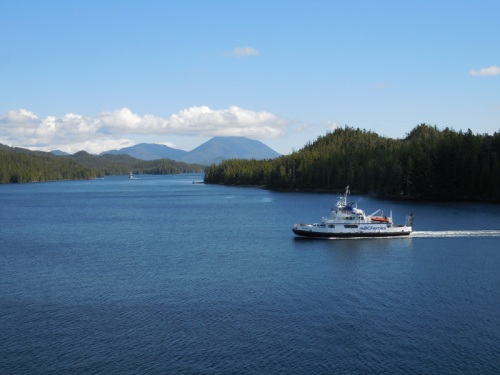 Bella Coola BC ferry – much smaller than ours

Old cannery – no longer in use

Our wake in the sun 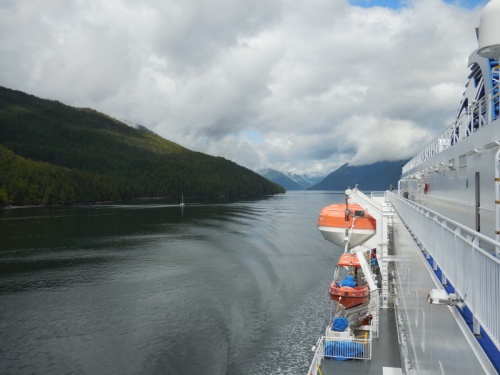 Morning clouds on the ferry

Sunset on the ferry

Tomorrow we start our trip down Vancouver Island.  We have pencilled in relatively short days – nothing more than 80k, with a rest day thrown in as well at a cool little hostel in the mountain biking town of Cumberland so it feels like it will be a bit of vacation after the Great North trek!  It is pretty hilly here though, so we may have some hard days despite the shorter distances.  Weather looks relatively good for the next couple of days, though I wouldn’t call it warm quite yet.  There’s talk of temperatures close to 30C in Victoria but it is quite a bit cooler up here.  Anyway, we are looking forward to getting back on the road – not counting our ferry dashes, we’ve been off the bikes for four days now…

Us on the ferry

Last ferry shot from the morning…

Oh yeah, I almost forgot to mention.  We are soft!  We met a young couple, with fairly limited kayak experience, at the hostel in Prince Rupert (Paul Everitt and Kelly (sorry didn’t get last name)).  They were rowing kayaks from Skagway to Seattle.  They had to carry food on their next leg for 20ish days.  Paul had ridden across Europe on a four person bike (2 side-by-side) that he made himself.  We talked to them for hours at the hostel – I hope our paths cross again as they have a real sense of adventure without getting too bound up by what you are ‘supposed’ to do or have when heading out to experience the world.  Paul’s website is:  http://www.going-solo.co.uk/  I think Paul has an instagram account too but sorry, we’re not that tech savy…).  There is a fun interview with him that you can see here – including a picture of the awesome bike he built!