We are back on the road today, after three very relaxing days in Whitehorse.  I had trouble tearing Nancy from her comfy bed this morning, but that’s sort of how it always goes after a rest day.  I don’t think it had anything to do with the eight pillows in our room.  We had brekkie for the fourth day in a row at Baked – a really nice bakery that we found on the first morning – good food and good coffee.  We left thinking we could actually live in Whitehorse – except for the 60 inches of snow that they get in a typical winter.

Straight away we had to ride back up Robert Service Road.  We came down this on our ride into town – remember, Chris and Nancy both yelling to me that they were not going to ride back up that beast?  Well, it was steep but not really that hard.  Something about the 100 miles we rode back on Thursday that made it seem really steep, even going down.  Today, I’m happy to report it was more mouse than lion.

Bikes at the ready – early on a nice day

Once back on the Alcan, we had pretty much winds on the nose from the get go.  We were both really feeling them and not overly motivated.  It’s one of those things you find on a bike tour – sometimes you just have to put your head down and go slowly.  We were entertained by some interesting Yukon road signs.  The first we saw several of and it took us a while to work out that the little graphic meant B&B – clever folks here in the Yukon.

The second sign that made us think was the Limited Visibility sign.  In Australia when you come to the crest of a hill, the sign says, of all things, “Crest”.  Here in the Yukon, they simply say “Limited Visibility”.

We slogged through the headwinds to the Yukon River crossing near Marsh Lake.  The winds were really strong around the river and had it not been for the nice views, we may have had reason to curse the wind.  We stopped at the river for morning tea – having burnt through the fuel that we’d pick up at Baked.  We had one of the PB&J sandwiches that Nancy made out of some good rolls from the grocery store tour on Sunday. 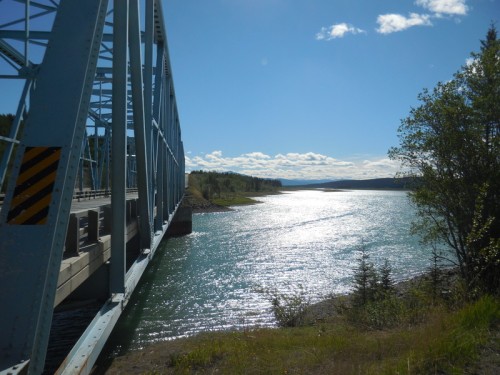 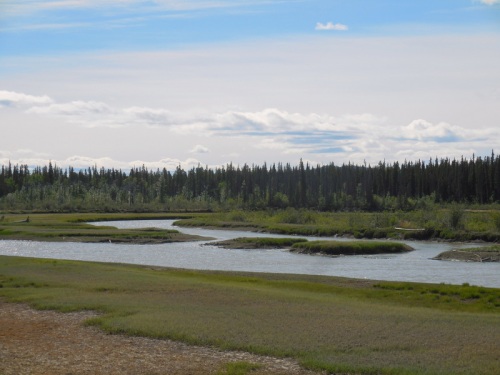 The mighty Yukon – getting smaller now

Shortly after the bridge we ran into the first of two touring cyclist we met going north.  When you are riding with the wind, it’s not polite to mention it to those slogging through it.  Vince, a very enthusiastic Frenchman was very kind, only smiling when we mentioned that we were having a tough go of it.  He started in Vancouver in March and has made really good progress.  The second cyclist we met was an Aussie from Perth.  He was also happy with the wind but somehow we did not get his name – we’ll call him Mick, just for the record.  Mick reported that he had not had all tailwinds today – which was music to our ears as we knew that the road turned sharply a little ways up. 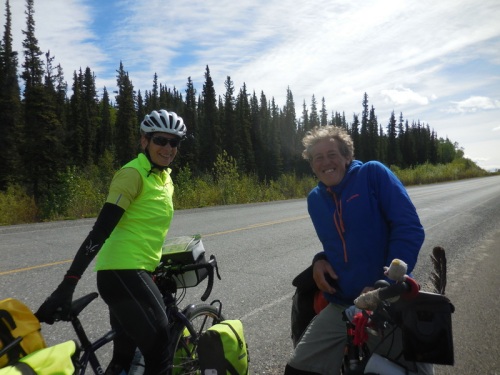 This brings me to the name of today’s blog.  We called it Meagan and Jake Day because Nancy’s sister Gretchen has two kids named (no prizes for guessing) Meagan and Jake.  They get the blog name of the day because today people and places of the same names brought us good fortune.  The first being the hard left turn that we made at a junction called Jake’s Corner.  The corner is named after an American Major who was working on the road and made the crews completely change the route – by-passing Carcross – so that he could get to Whitehorse more directly.  We will remember Jake’s Corner because today, that left turn meant we finally swapped headwinds for tailwinds – yahoo!

A tailwind is good…

Shortly after the corner, it was Meagan’s job to lend her hand at making our day better.  We came across one of those “nuke the road and start over” paving crews.  They were making a right mess of the road – mud, dust and lots of heavy machinery.  To the rescue Meagan and her pilot truck, complete with bike rack.  We arrived at her point just as she was turning around and getting ready to lead cars through.  All the cars waited while Meagan helped us unload our bike bags and load everything onto her truck. She then led the convoy through 4kms of yuck, all the while telling us stories of bears, moose and the like – she grew up nearby.

So there you go – our otherwise hard day made better by Jake and Meagan – thanks for joining us today guys!

After Meagan dropped us off, we rode like the wind (behind us now!) and managed to clear the rest of the bad road before the next wave of traffic came through.  We arrived at the Squanga Lake campground to find an absolute gem of a campsite.  We are perched just above the water in a tent site.  It really is a spectacular site.  Just behind the site is a camp pavilion complete with tables and a wood stove.  Not only that, they provide free fire wood for the stove.  It got chilly as we were cooking dinner so I started a fire which we both enjoyed immensely.  What a treat for all of $12 for the two of us to stay here.  (Editor’s note – the fire was so hot that I had to take off my coat while we sat and ate dinner, and eventually had to move to a cooler spot!  It was nice though, and provided a second cooking top for warming the bread, toasting the pine nuts and making hot water.  Dave was like a kid in a candy store with the fire!)

There are no showers but we didn’t really get very hot today so sponge baths were just fine.  The lake is way too cold to hop into but Nancy did go down and use it to scrub off a bit (with her bear spray always within handy reach).  Water is available via a manual pump but has to be filtered (or boiled for 2 minutes per the sign).  After a great dinner of pasta with sardines and the remaining rolls, we loaded all of our food into the provided bear food locker.  Or should I say, bear proof food locker.  We also met a fellow camper who is a local.  He’s been coming here for years and says we have nothing to worry about.  Perhaps the shotgun he carries is part of the reason – he told us if we have trouble, all we have to do is yell and help will be on the way – great!

Tomorrow is a short day to Teslin.  It’s a very small town but they have an RV park right in town.  We have about 1/3 to ride with this nice wind, then another hard turn back to the south and maybe some headwinds.