We’ve had a couple nice days here in Whitehorse.  The boys were here until this morning so we did tourist things yesterday and chore things today.  We also had some good food and a few malted beverages – so we ticked “nice rest day” boxes as well.  The chore list included cleaning the bikes, laundry, buying food for the road ahead and some detailed planning of the next 14 days of riding, which will take us down the Cassiar Hwy and deep into British Columbia. 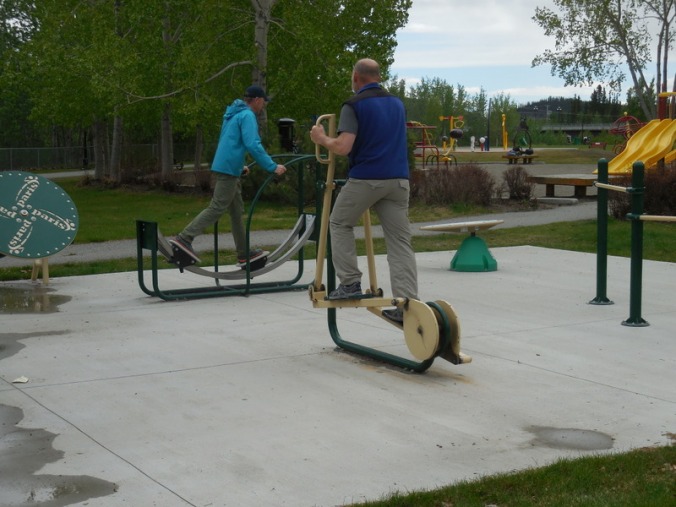 One of the highlights of yesterday was checking out the dry-docked and restored river boat, the Klondike.  This area used to have no connecting roads so the river was the way people and freight moved around.  None of the boats run regular services any longer, having been replaced by trucks, cars and roadways.  Not surprisingly, moving goods and people around by these boats was much harder than it is now.  Boats rarely ran to predictable schedules and required a lot of work to keep running.  Boats used as much as a cord of wood per hour to move up and down the river.  The wood was cut and hauled out of nearby forests, mostly by hand.  The boats could not carry enough wood for the whole trip so generally had to make several stops along the way to replenish the wood stocks on board. 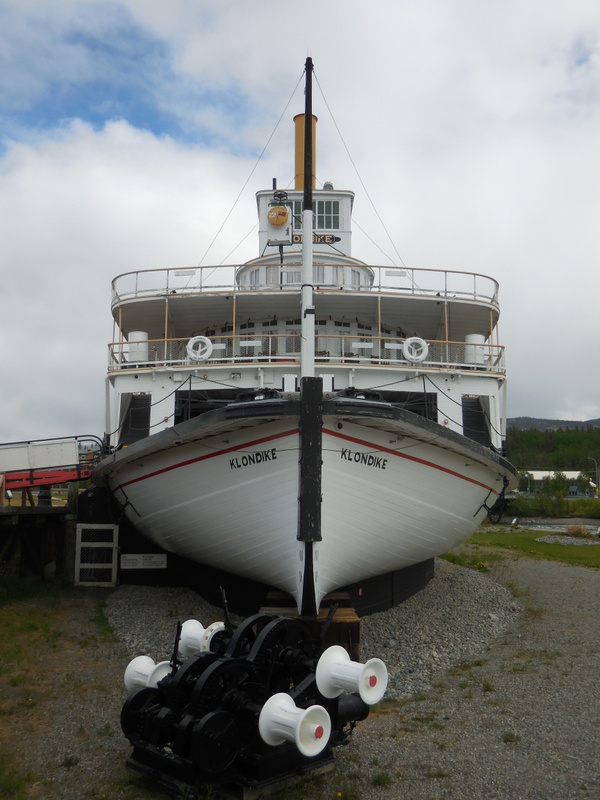 Klondike on the riverfront 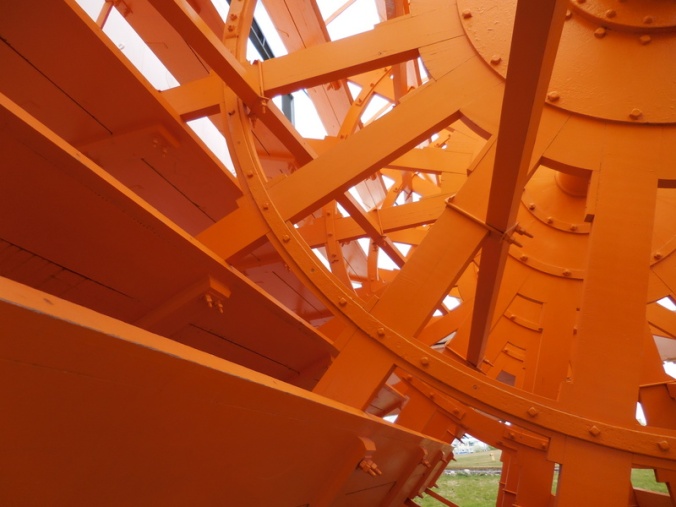 The Klondike was full of provisions of the era.  In fact, our shopping list today had many of the same items.  We didn’t have to buy shredded wheat (oatmeal) however because we sort of over bought for the ride to Whitehorse.  Chris ended up having 1 kg of oatmeal left in his bags when we arrived in Whitehorse – we are going to miss having “our pack horse” Chris on the road south. 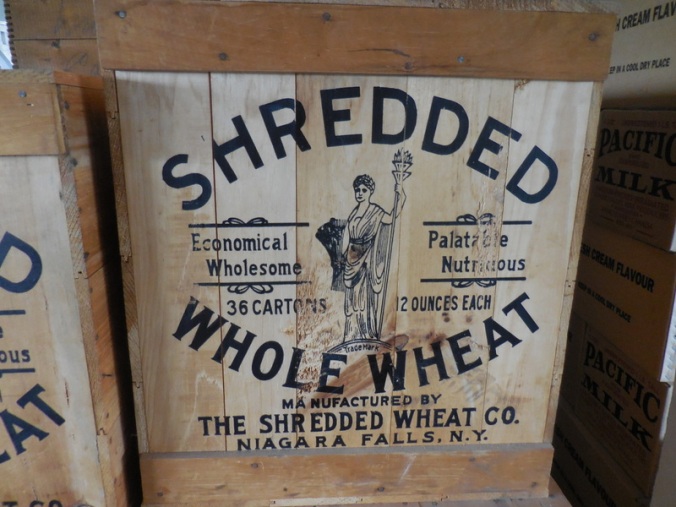 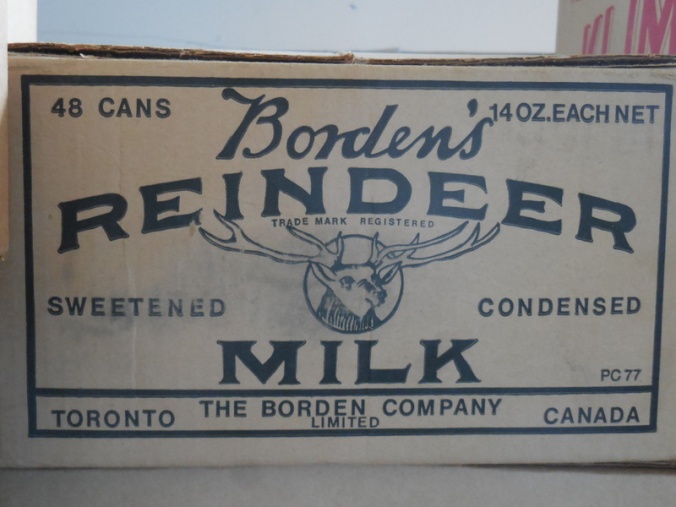 The boys decided to stop in the souvenir shops while Nancy and I walked up the waterfront area.  Whitehorse has a nice linear parkway along the riverfront.  The riverfront was an important area for the First Nation folks and they have a nice interpretive / community center right on the water.  In the month of June they have native boat builders making four original boats from scratch – spruce dugout canoe, birch bark canoe, moose skin and finally an Inuit kayak. 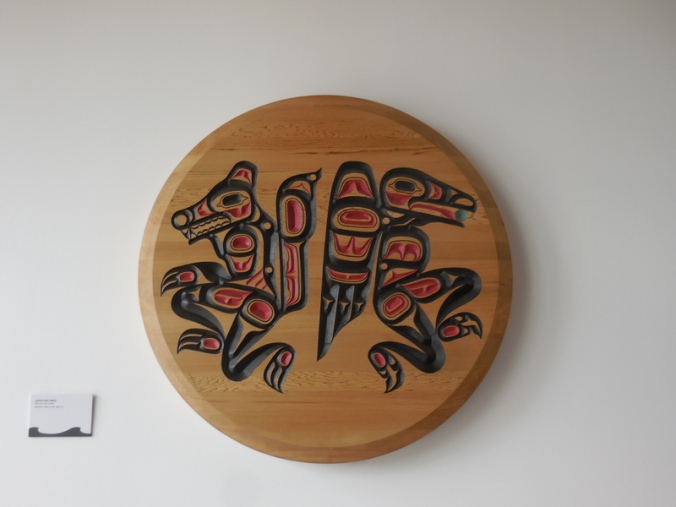 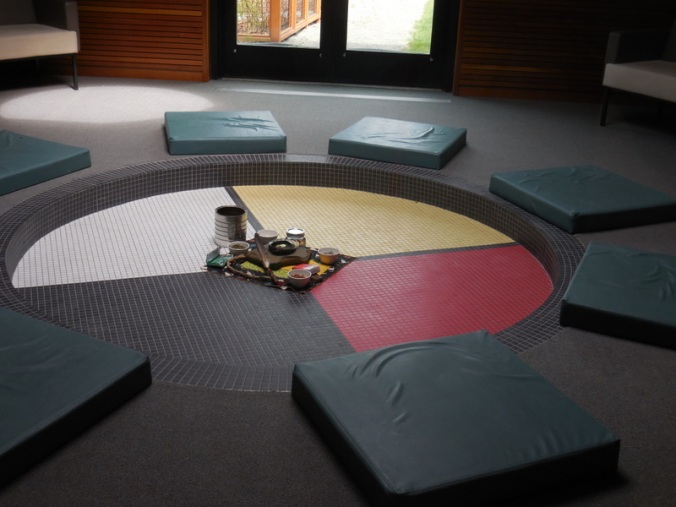 They had only started the spruce dugout when Mark went by on Friday and were just working on the outside.  By the time we arrived on Saturday, they’d finished the outside and started working on the inside.  Given that they only have small hand tools, this was pretty impressive progress.  The chopping was very rhythmic, almost hypnotic. 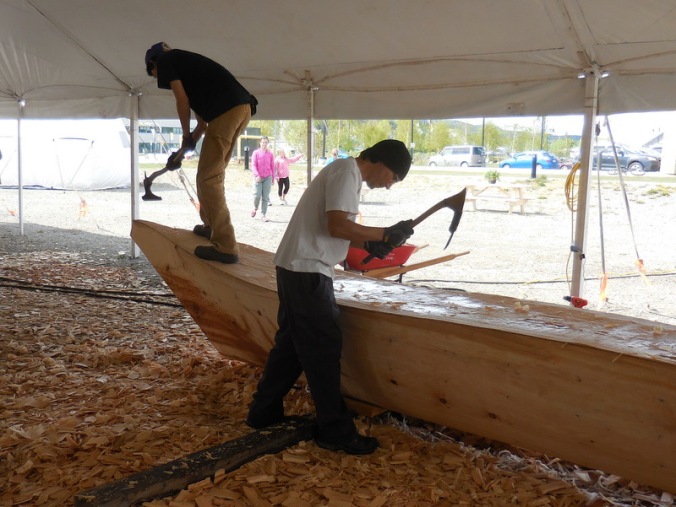 We walked through the rest of the interpretive centre and spotted another building that looked interesting a little inland, across the railroad tracks.  By chance, we stumbled on the Lumel Glass studio.  There were a couple of furnaces in operation and a nice gift shop.  We watched some glass blowing then went and took a look at the gift shop.  While inside, a woman working there asked me if I was from Tok (I was wearing my new Tok cap).  Meet Lu (of Lumel – Mel was her high school sweetheart), co-owners of Lumel Studios.  Lu said she grew up in the area and returned to retire there after 30 years away.  Retirement is this glass blowing studio, where they offer classes and instruction for kids and others as a way to engage the community.  You can even try your hand at it for a small fee. 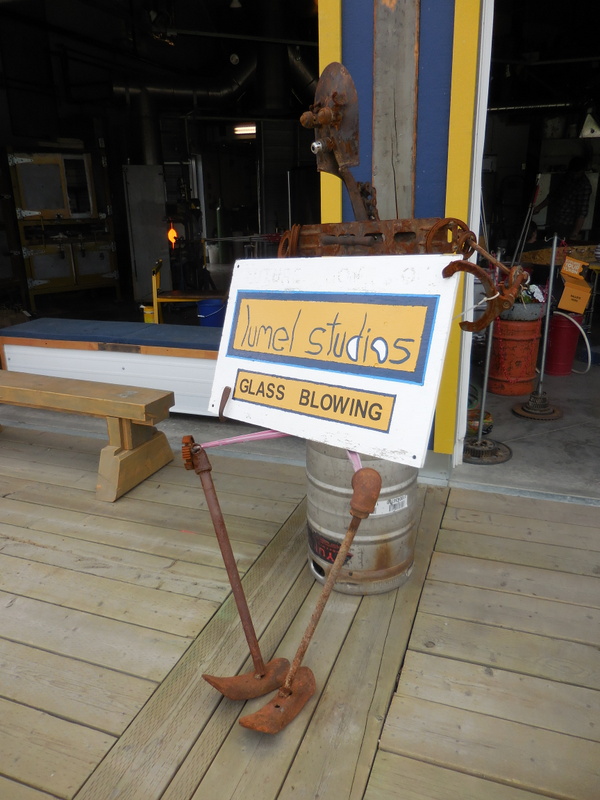 Soon we were talking about our trip and Lu was telling tales of a couple that she met two years ago.  Back then, the couple stayed at a cabin owned by Lu/Mel.  Before we knew it, Lu was offering us the same cabin for as long as we wanted.  It’s 83k north (the wrong way for us) so we politely declined.  Lu then offered that we could borrow a car from her and go up – wow, such kindness.

Well, the boys are gone and we don’t really have a schedule but we still couldn’t bring ourselves to take Lu up on the offer, as it seems like we are too early in the trip for diversions.  Lu then ducked behind the furnace area and grabbed a small glass ball that she had made the day before – it was still slightly warm.  She gave this to Nancy as a gift – hoping it was not too big to carry with us on our bike.  For the record, it is not too big, little gifts and encounters like this are why we do these trips – we’ll find a way to fit the ball in and deliver it safely to our cabin in Oregon on our way down to South America.  We exchanged details and the details of the other travellers.  If you read this Lu, thanks for making Whitehorse special for us and perhaps someday we’ll come back to take you up on your kind offer to use your cabin! 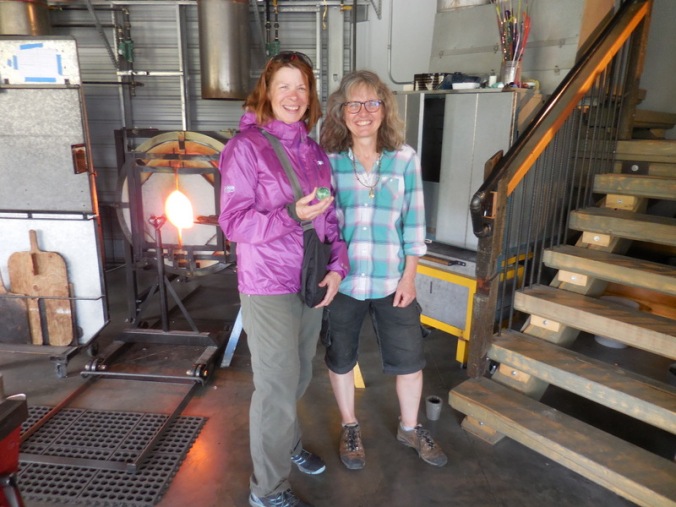 While today was more about chores, we did get out and have a look at a few things in town.  We found some interesting city art – they’ve done a nice job keeping things fresh and attractive. 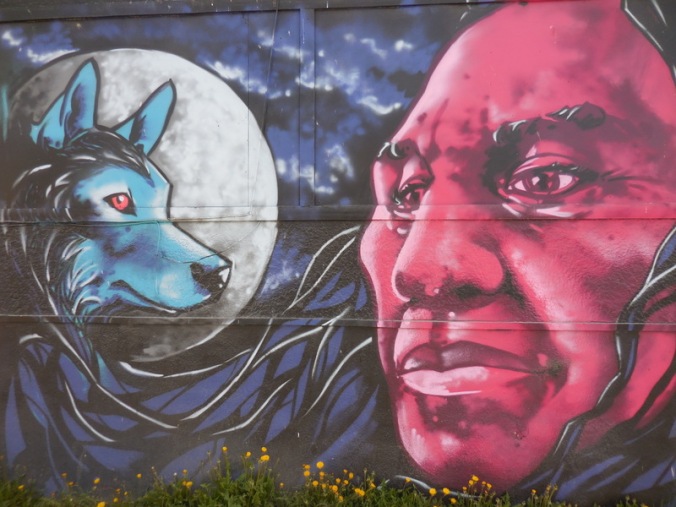 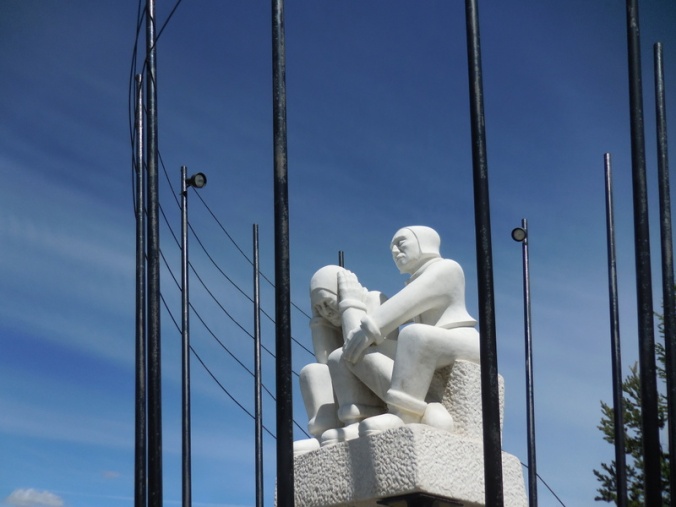 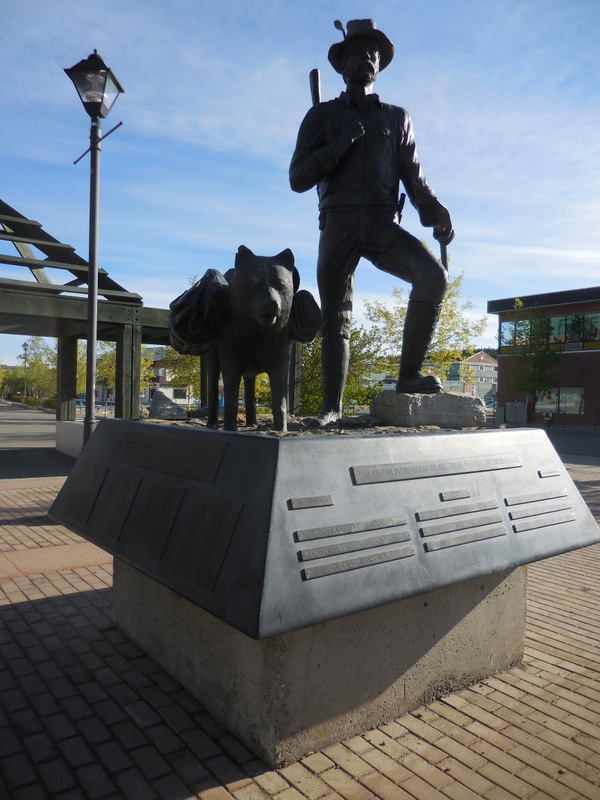 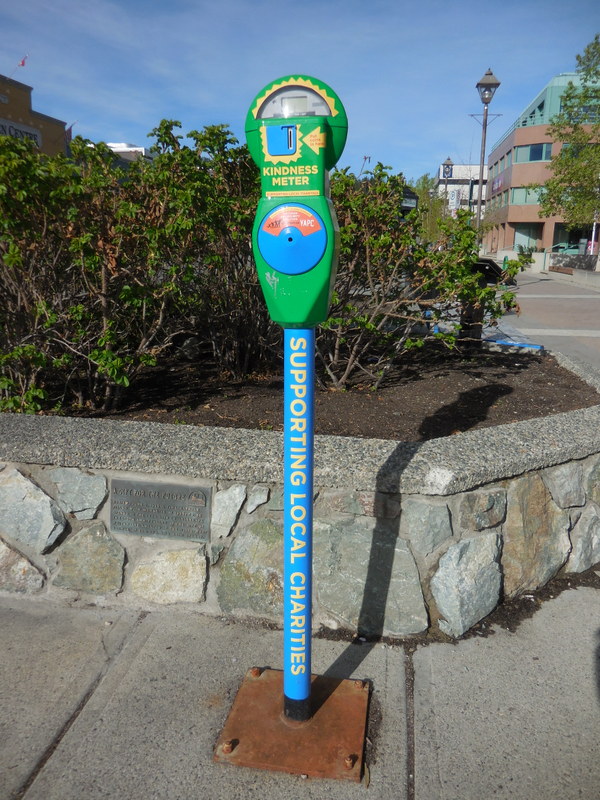 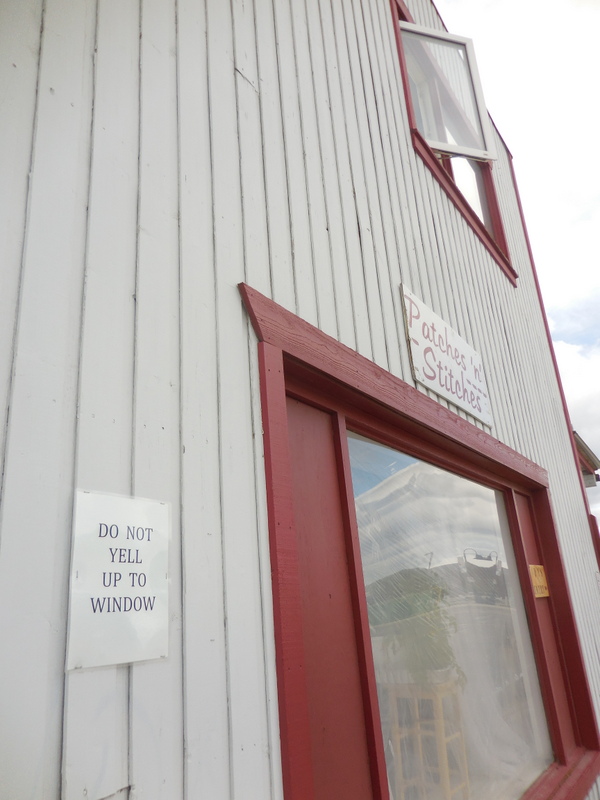 While shopping, we visited three grocery stores in order of bad to good.  I only share this because if we done it in the other order, we would have more time to relax and it was probably my fault.  My senior editor was happy to get back to the hotel after too much walking.  The store order was Walmart – not so go, Real Canadian Super Store – ok, had most things, then Independent – best, had everything we needed in the first place.  And unfortunately, they were in inverse order of proximity to our hotel.  Oh well, at least we got out for a walk in the sunshine.  And, I have promised to go get a pizza to eat with a lovely salad that we got at the last store to make up for it.

We’ve planned about two weeks of riding from here.  Tomorrow we start by heading to Squanga Lake.  We don’t think we’ll have to rough camp as there should be government/provincial parks or caravan parks available but we’ll be going through some small towns and isolated areas so we will need to be careful about food planning.  From Fairbanks to here, we mostly had dinner stops in towns where we stopped.  We may not have that every day going forward but who knows what will turn up.

Our break in Whitehorse has been great.  This is a very nice town, with lots of good food, good coffee, nice people and beautiful views – it would be an easy place to live.  If you haven’t visited it we recommend a trip!

Posts over the next couple of weeks will come when internet, via Wi-Fi or when our phone allow it. 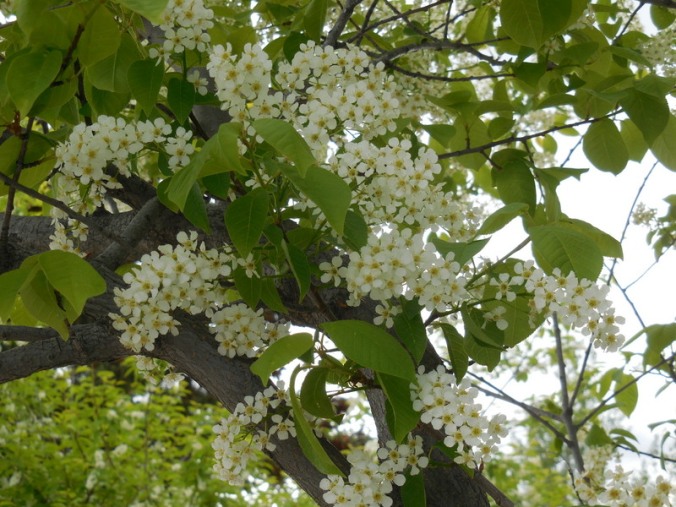 These trees are everywhere and very fragrant – what are they?

5 thoughts on “Two days off in Whitehorse”