As noted yesterday, rain was forecast to start this morning at 7AM. If this had happened, it would have been right in the middle of our packing up and I would have been in trouble (for pushing us to camp last night). I’m happy, no make that thrilled, to report that we had clear skies when we got up and mostly clear all the way through packing and brekkie. We managed to get the tent dried out on the clothesline, eat and pack under sunny skies. We left the caravan park at 8:44 precisely. I know this because the moment we started riding, we felt the first small drops of rain on our faces – at exactly 8:44. Boy, did I dodge a bullet there. We don’t mind riding in the rain – but packing and having to start riding wet makes it so much worse. We had rain off and on all day, but to be fair, it was never hard enough to be a real bother. Right Nance? Now where did she go this time… 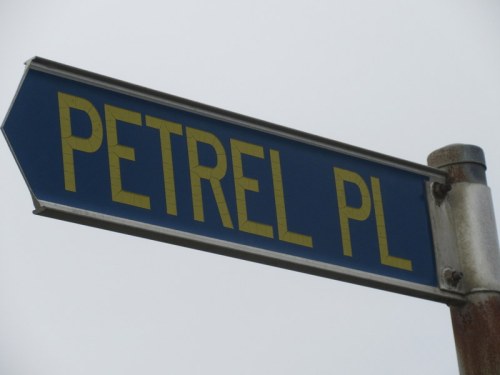 I saw this sign leaving the caravan park and it suddenly dawned on me how much the bird petrel is like my older sister. Her name is Pam and she goes by pertel sometimes. The things that you think about when it’s raining.

We had about 15k of nice quiet roads out through Broadwater National Park to start the day. We reached the Pacific Motorway at Broadwater. I should really say we passed over the “not going to be finished in two weeks” motorway at Broadwater. Instead of a nice wide motorway to share with all of the north/south traffic on the east coast of Australia, we had barely more than a goat track with minimal shoulder, the hopefully soon-to-be-old Pacific Highway. It was the least fun part of the day but to be fair, traffic was light. All the same, we were thrilled to exit the “highway” at River Road. Good news at least, this area will be completely different for riding in 6 months when they actually finish all the motorway projects.

Most churches are closed now, this one is closed 7 days per week – more rain confusion for me perhaps as it isn’t quite as odd reading the sign now as I type the blog up, as it was riding past this morning – huh?

River Road was supposed to be a traffic free goat track down to the Burns Point Ferry and it did not disappoint. We had the Richmond River on one side and tall, yet to be harvested, sugar cane on the other. There was some drizzle about but we hardly noticed because we had a strong tail wind and the rain was behind us. It was fast and fun riding. Even though we wore rain coats all day (for the first time on this trip) we actually got a bit chilled waiting for the ferry to return to our side of the river to pick us up.

Empire Vale Post office, one of the smallest in Australia. River road was the north/south Highway in these parts until 1964 when a bridge was built up river. That bridge will soon be the old bridge as the new motorway comes online. And the cycle continues – more things getting obsoleted for bigger, new, better – I guess.

We turned right some after I took this photo – a sugar cane factory and some sugar cane – theme of the morning, besides rain 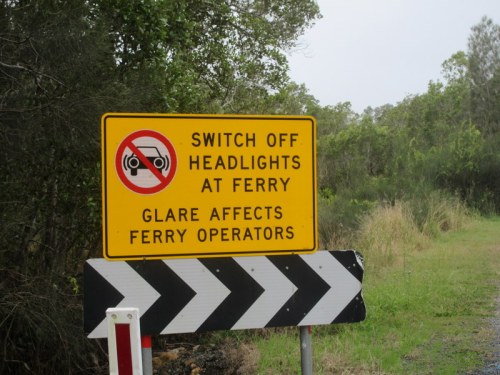 The ferry is open at night and this was 500 metres from the ferry. There are no street lights. So, what happens if you are driving at night? Do you drive in the dark for 500 metres – I think the rain has just about done me in a this point!

Once across the ferry we had 1.5 km to ride to reach today’s highly anticipated “big thing”. Ballina is home to The Big Prawn. It is much bigger than the Big Banana and much, much bigger than the other Big Prawn that we saw down south. The Ballina Big Prawn was built in 1989 and originally didn’t have a full tail. In 2013 they rebuilt it and added the tail. There is nothing commercial around this Big Prawn. The 2013 refurbishment was paid for by Bunnings which has a store next to the prawn. (Bunnings is the Home Depot-equivalent of Australia). I’m not sure why Bunnings forked over the $400k it cost for the rebuild other than it was a nice thing to do. I’m sure that no one goes to Bunnings looking for a big prawn.

That is one Big Prawn

And just in case you thought I was playing with the angles to make it look big. Here were are below it.

After pulling ourselves away from the Big Prawn, we rolled into the town of Ballina to find something for lunch. There was quite a bit of traffic and in fact, at times we were riding faster than the cars in the pseudo bike lane. We pulled over at The Cove Cafe for nice egg and bacon roll, plus proper flat whites. While we huddled under the outside patio heater we watched the rain start to lighten and worked up the courage to continue towards Byron.

Just what you need on a rainy day…

We had about 30k riding left to reach Byron and thought that it would be fairly built up like the bigger towns further down on the coast. To our surprise, it was a pretty nice cycle with only a couple of those planned communities of identical retirement homes. The highlight of this section was pulling over at Lennox Head lookout and watching the surfers at the world famous Lennox break. Most of the guys surfing were very good, which is no surprise as later we read that Lennox Head is for experienced surfers only. The line up of surfers working out to the start point was quite long – we have no idea if this was a good, bad or even normal day but it looked like fun, watching at least. 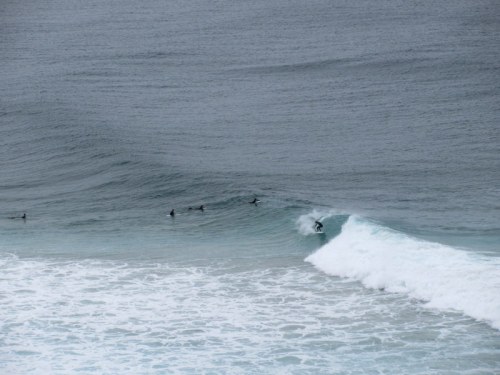 The lineup of surfers floating out comes up the outside. When you reach the wave area, it’s your turn to get up and ride all they way in. One person, one wave. No pressure – at least 50 of your mates watching you come in.

They look so graceful…

We eventually made our way to the Byron Bay YHA for a planned three night stay here. It’s surprisingly busy but they have lots of obvious Covid procedures in place. We are definitely bringing the average age up by just being here – though to be fair, I’ve seen a few other grey beards as well. Byron and the YHA both feel pretty hip. I’m not sure that we are “legitimate” enough to hang with the hipsters. But then again, we rode our bikes here from Sydney – that has to generate some level of credibility. Our biggest issue is that we lack wetsuits to hang over the balcony in front of our room here at the YHA. Maybe I’ll hang a pair of dirty cycling shorts in front of our room and start a new cool.

We made it to Byron!

Reaching Byron, we’ve just about reached the end of the north bound road on this trip. Well, not technically the end of the road as clearly Australia carries on north of here for a long spell. But it’s just about as far north as we can ride. The Queensland border is about 70k from here and it is CLOSED to all but essential workers. So, we’ll stop heading north here in Byron. In a few days we head west to a town called Casino where the north/south train also terminates. Casino is the last north bound train stop (or first if you are heading south) in NSW. It’s a shame we can’t continue northward but in the big scheme of things, the impact Covid has had on the trip so far has been minimal. We know how lucky we are to live here in Australia. 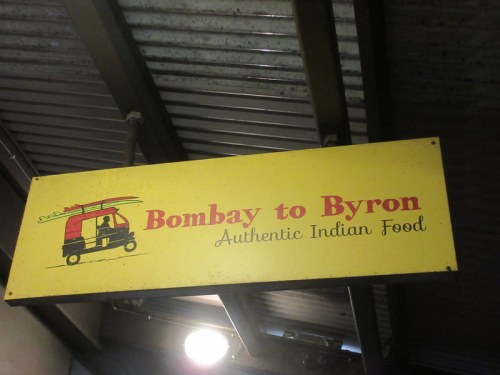 Check back in few days for some thoughts on Byron Bay and then for an update about the last few days of the trip.

This entry was posted in Uncategorized. Bookmark the permalink.