We had another quiet night in the Calypso Caravan Park. Our little 1950s apartment worked out swell (I’ve been trying to figure a way of including the word “swell” in a post for weeks – finally!) Our apartment was actually cleaner than we thought it would be and the bed was super comfortable. Don’t judge a book by its cover I guess.

We had a leisurely start to the day as the ferry dock was all of 200 meters from our unit and it didn’t depart until 9:30. The Yamba to Iluka ferry is a private venture and cost us $9 dollars each with the bikes. The guy collecting money was a bit of a character so we’re not really sure if he got the sums right but we didn’t argue. The sail to Iluka was smooth and took about 40 minutes.

Our ferry coming to the dock 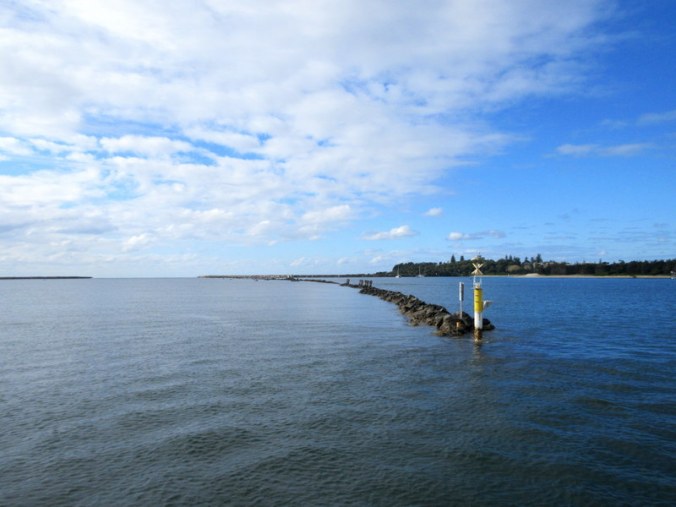 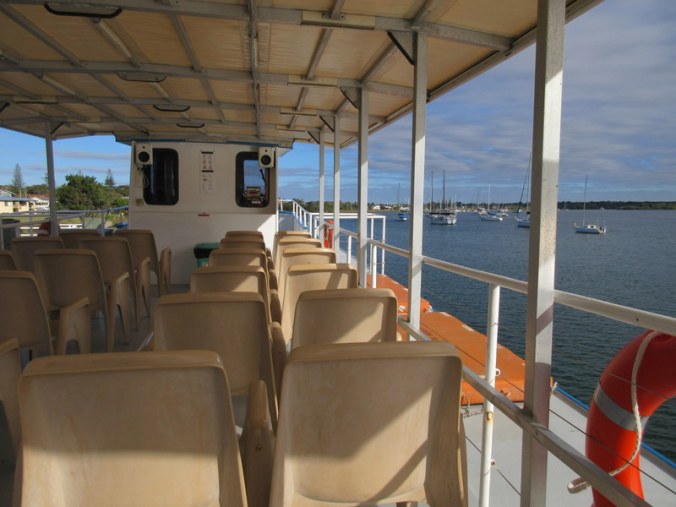 Upstairs on the ferry – bit breezy

Iluka is smaller than Yamba and probably still a little sleepy even though we arrived at 10:30. I keep wanting to write Iluka as iLuka. For some reason, it feels like it should be an internet code word or name. We enjoyed a mostly quiet ride out of town back out to the Pacific Highway, or in this case “almost” motorway.

They are upgrading the old two lane highway into a modern four lane dual carriage way. The project runs from Woolgoolga to Ballina and is supposed to open in two weeks time ($4.9 billion and 155 km of motorway upgrade). We rode on the new road today for about 35 km and I can report that it is not going to be open in two weeks time. Our side of the highway was down to one lane for much of the ride, and then they completely closed the oncoming lane and made our side a bi-directional two way road. They did this because in large sections, the concrete for the other side has not even been laid – thus my point about opening in two weeks time. Mostly we had a wide shoulder but a few times it got super narrow. We had to dodge a couple guardrails and trucks but made it through unscathed.

The best thing about the new motorway has got to be the new koala proof fence and motorway crossings that they have integrated into the roadway’s design. Kilometre after kilometre is lined with little short fences that have a lip on them that prevents a koala from crossing. At what we assume are reasonably appropriate distances for koala passage, they have tunnels that go under the four lanes of highway. At the tunnels they’ve built these kind of funky log structures that must somehow help a crossing koala feel more comfortable. 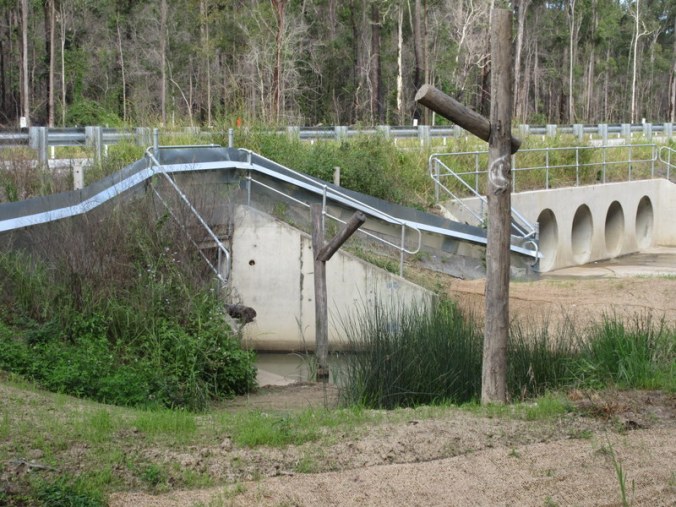 The fence – silver part is a cap that koala can’t climb over. This fence went on for many kilometres, not just here at the tunnel.

This is the back or highway side of the fence 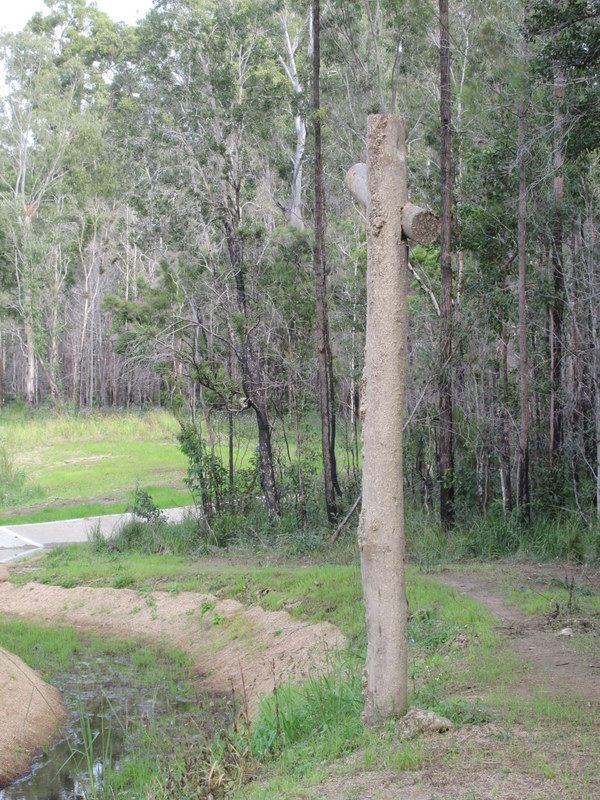 We stopped for photos at one of the crossings and looked for koalas but didn’t see any. A lot of thought has been put into helping koalas, so full marks to the Roads and Maritime folks who are building the motorway. Reportedly there is a large population of koalas in the area we rode through, with many getting struck and killed on the old road. Hopefully the koalas can figure out the new crossing and continue to thrive in the area.

The last little bit of the motorway has barely been started all of the traffic continued on the old highway that routes through the quiet little berg of Woodburn. We stopped there to calm our nerves and watch all the heavy motorway traffic roll through the middle of town. I’m sure that from a business perspective the locals will be sad to have traffic die to a trickle when the motorway opens but I’m also 100% sure that they’ll be glad to see the last of the trucks barrelling through the middle of town.

After a nice rest, an egg and bacon roll and a lovely Byron Bay organic coffee, we saddled back up for the last 10 km to Evans Head. The ride into town was surprisingly peaceful and over almost before we knew it. It is just so much more relaxing riding on these calm country roads. 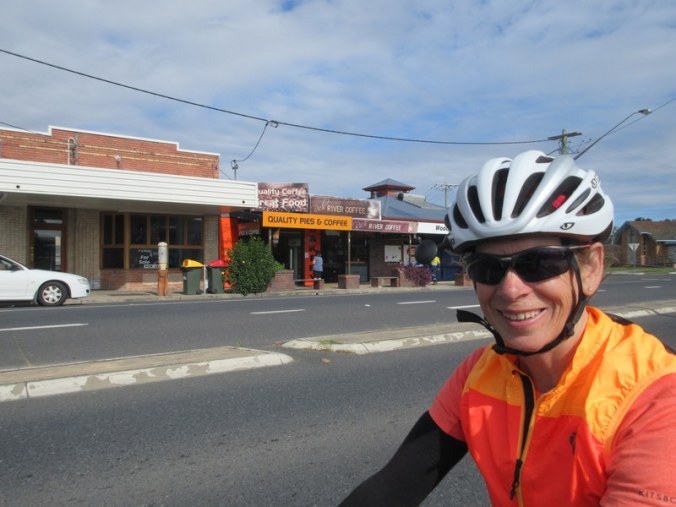 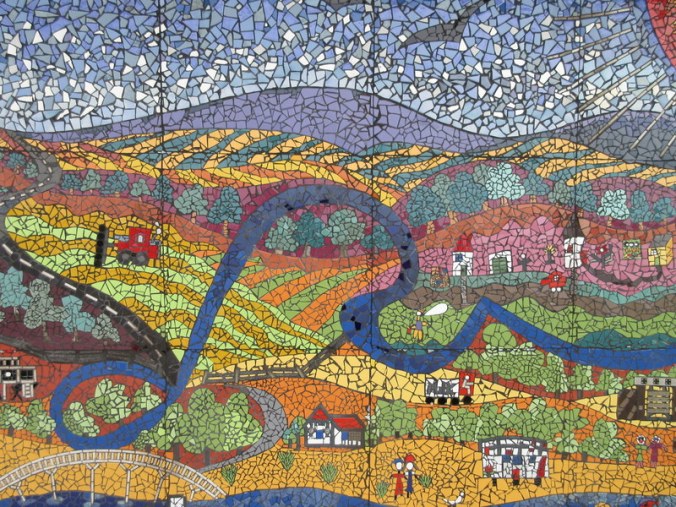 Skies were clear but some rain is in the forecast for early tomorrow morning. Long-time readers will know about our wet feet rule – that is, if your feet are wet at the end of a day, you get a hotel room. Well, today our feet were not wet and it was sunny. But tomorrow morning our feet could be wet. So, judges, what’s the ruling on that one? We had differing opinions amongst the team members but the judges ruled, dry feet today, you camp today. So that’s what we’re doing . We settled into a spot right by the camp kitchen in the well presented Evans Head Reflection Holiday Park. 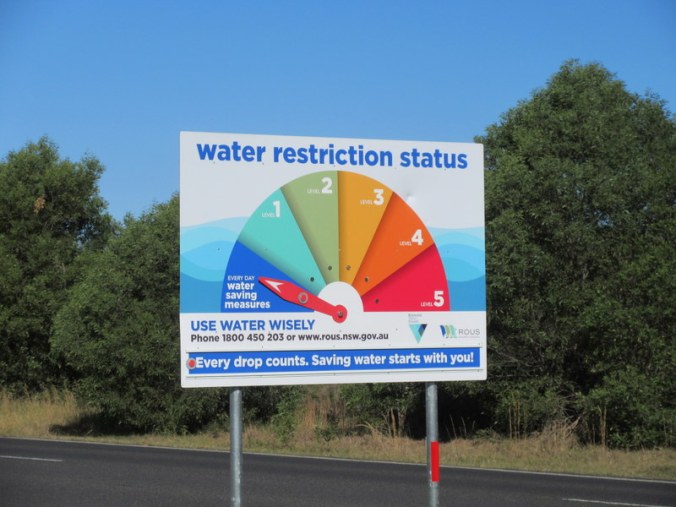 It was called a midget plane – no, it’s not another “big” highway attraction

Just by luck it’s Friday and on Friday Evans Head has a local farmers market from 3PM to 6PM at the surf life saving club located right next to the caravan park. We got cleaned up and headed over to find a small but very nice market. We debated a bit about buying a bunch of nice veggies and making something but gave into temptation and grabbed Junk Yard Dog. I know, it sounds like a hot-dog but it was so much better. We also grabbed some apples, bread and a slice of pecan pie for a second dinner/snack back at camp. 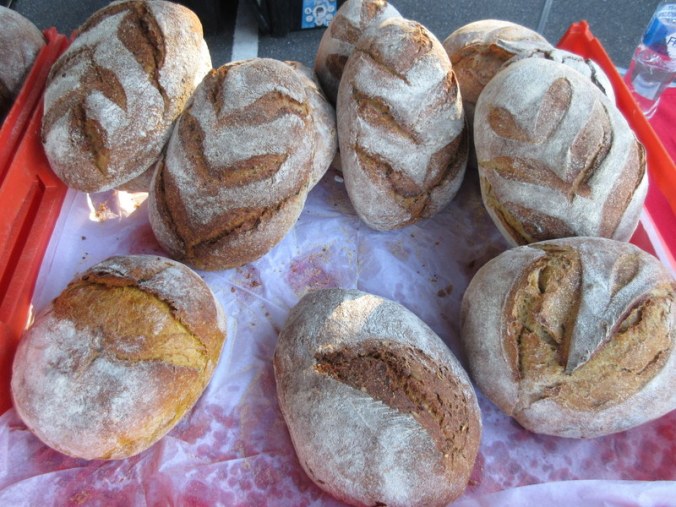 It was still early when we finished at the market so what else to do but have a cleansing ale in the bar at the surf life saving club. After all, these surf life saving clubs do good work and often only survive on the profits from their bar or restaurant. It was quite relaxing watching three surfers compete with a dolphin for the best waves as the sun set behind us. Yes, the surfers were graceful, but no, I’m still not taking lessons! 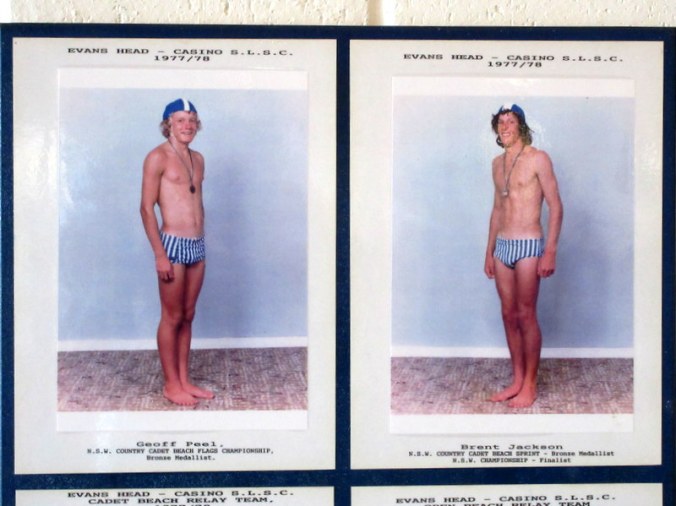 78-79 NSW swim carnival bronze medal winners from this very club. I would normally make a funny comment about their swim trunks or hair, but not this time, for fear that one of my sisters finds a nearly identical photo of me!

Tomorrow we have our last day riding north, and plan on reaching Byron Bay in the early afternoon. We have to ride a few kilometres on the highway/motorway – one can only guess if it will be a goat track or a dual carriage way. But it’s only few kilometres – we’ll survive. We also have another ferry tomorrow, plus what we think is our last “big thing” for the trip. Tune in tomorrow for a full report on what’s “big” in these parts.