Dave says I have to say I am a guest contributor now, which seems unfair as I often have to substantially rewrite his blogs but I never get credit for it. I am sure he doesn’t see the merit in my rewrites but you all don’t see the form in which they are delivered to me! And, my big sister is an editor, writer, holder of multiple English/writing degrees so we can’t put out blogs with multiple misspellings and grammatical errors – though we probably do, as it is sometimes hard to focus on proof reading at the end of the day on a bicycle. Anyway, I am sure you are not interested in how we write but only that we do so enough about that. (Junior editor note: I have corrected Nancy’s double spaces following sentences – so much for technological writing skills) (and no, I won’t make a big deal out of other things I correct, no need to be overly boastful)

It was very cold overnight – we both shivered a bit in the tent as we didn’t quite dress for the temperature. We were in the tent by 7:30 after getting smoked out of the camp kitchen by some other visitors that insisted on cooking hamburgers on the stovetop, rather than out on the BBQs. Even with all the doors open (freezing) the place was still full of smoke and our clothes were soaking up the smell. After another podcast it was 8:30, a respectable hour to go to sleep, at least when you are on a bike tour. 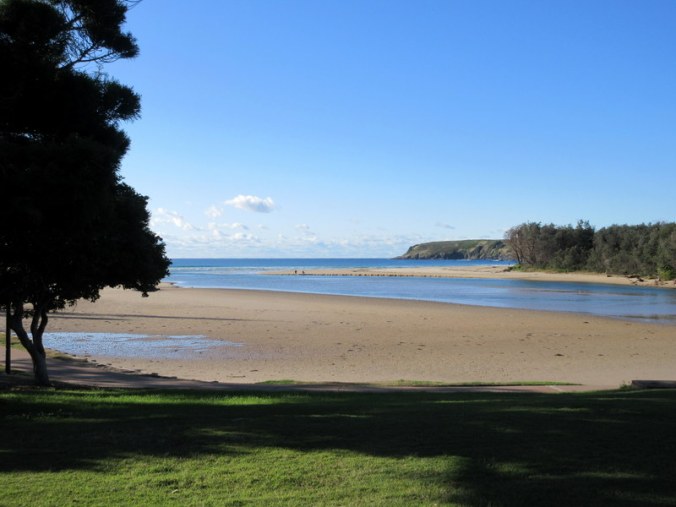 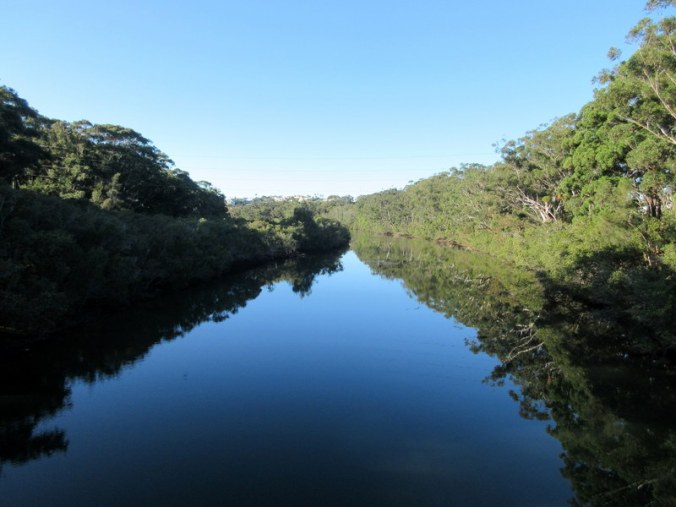 River up in town, another blue ribbon day

After such an early night we were up early, had breakfast and were on the road just after 8am. We took an inland route to Grafton today and did not have to get on the freeway at all. It was a very pretty ride through forests and small burgs. We had a bit of a tough climb out of Coffs Harbour and then it was rolly polly all day, with no sections of extended flat riding. 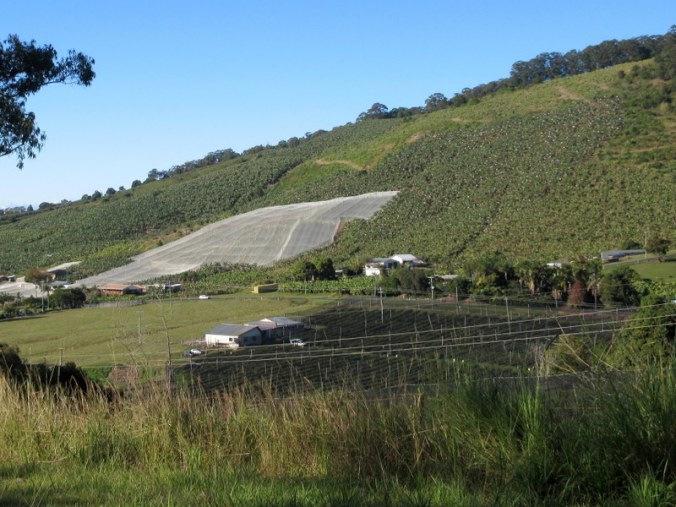 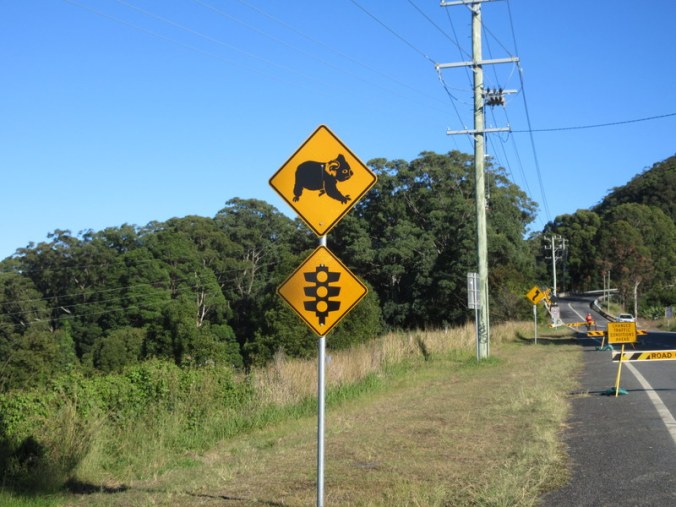 I have never seen a stop light for koala. For the record, we didn’t stop because no koala where crossing 🙂

Our first stop after about 25k or so was at the small village of Coramba, where we stopped at the local general store that is also a cafe. Our timing was perfect as the owner was just finishing up taking publicity photos of a nicely made cappuccino and some macaroons and she offered us the cappuccino for free as she was just going to throw it away – thanks Chloe and Mychelle! It was a nice little cafe and the coffees went down a treat with a tasty homemade scone. If you are in those parts stop by and see them. 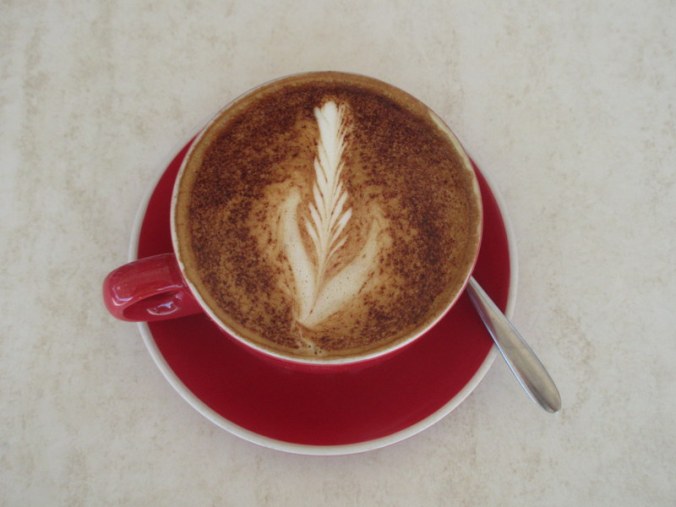 Seen on “how to make coffee” videos – well done Chloe

Just down the street from the cafe was a lovely needlework/quilting store that was open and while I knew Dave would not be happy if I went in I had to go down to see the two French bulldogs sitting on the front porch. Frank the Frenchie came running down to greet me and wanted a few hugs and scratches and I had to take a picture for my other sister who also has a Frenchie. 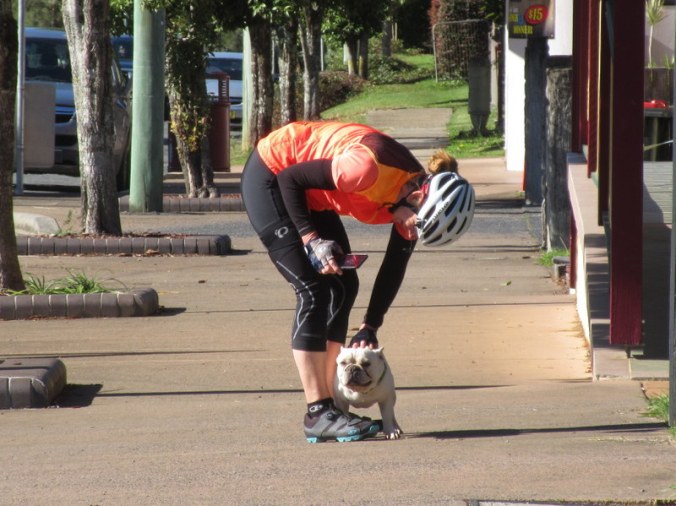 After Coramba we went up and down and up and down as we made our way across many creek crossings and then back up to the ridgeline. There were lots of warnings about flooding after heavy rains – thankfully we didn’t have to worry about that today. Traffic was a bit heavier than expected, including several fully loaded log trucks. Actually it felt a lot like riding the back roads of Oregon with the forests and the log trucks, just on even narrower roads! It wasn’t bad really, and while we had a pesky side wind for most of the day the sun was shining with no clouds so it was hard to complain. 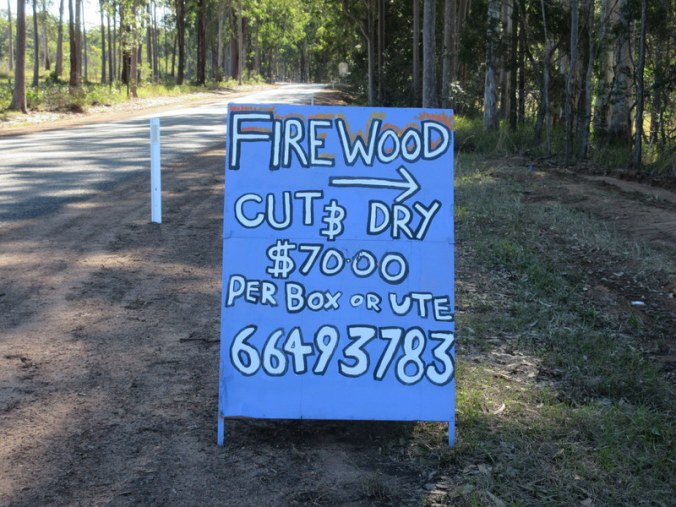 Seen out on the highway – guess selling wood by the cord is no longer the thing to do. Here, you buy it by the box or ute – Wonder how big a ute that you can fill???

Not long after tea in Coramba, we pulled into Glenreagh. It was too early to stop for lunch, but it’s never too early to stop for another “Australian big road side attraction.” Glenreagh is the home of the big Golden Dog. For some reason, the big Golden Dog didn’t make the official list of big things that Dave found so it was a complete surprise when we passed the Glenreagh Golden Dog Hotel and spotted the Big Golden Dog. How exciting, another big thing when we least expected it. Dave was very pleased. 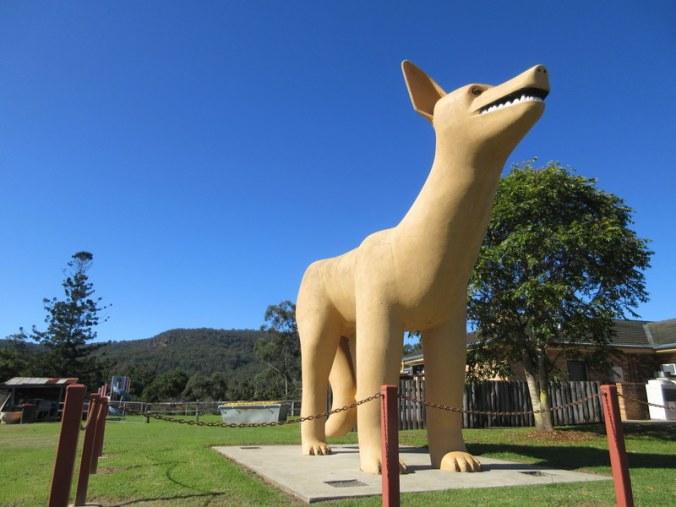 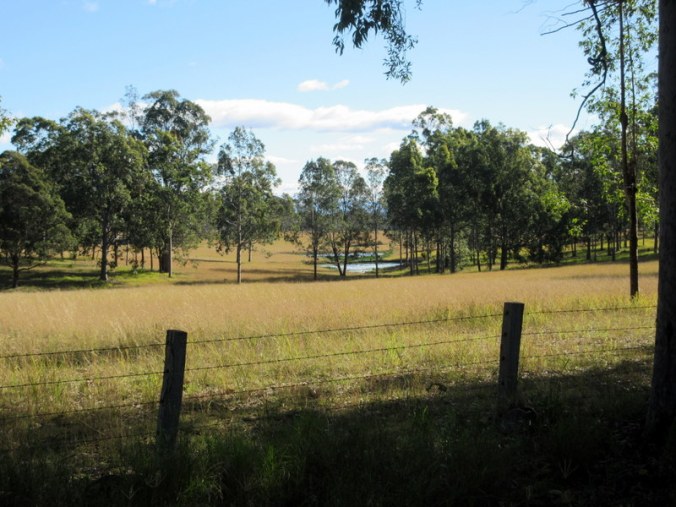 We rolled through this all day, note that all the damns here are full.

After failing to find an appropriately spaced village in which to try our luck at finding free food again we eventually stopped to eat PB&J sandwiches in a bus shelter in the middle of nowhere. From there it was another 30k or so into Grafton. To get to the downtown area we had to cross the Clarence River on a narrow bridge – we only saw once we were on it that there was a bike path below the road surface. A bit of a hairy ride with the cross wind but thankfully we had a nice car behind us that stayed safely back until we got to the other side.  When we leave town going that way tomorrow, we’ll take the new bridge, which somehow we also missed coming into town today – it will have a bike path I’m sure. 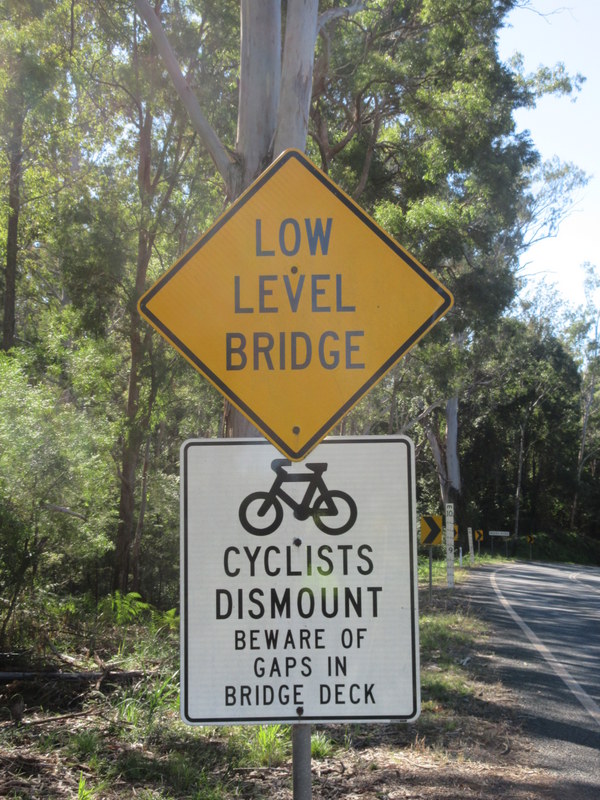 There were gaps, we were super careful, we did not dismount – phew, just made it 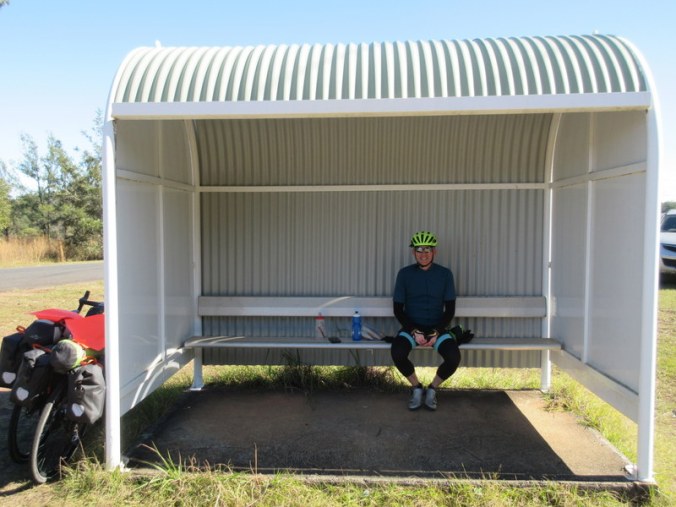 Hey, it’s out of the wind and warm enough for just my Kitsbow wool jersey #kistbow

We weren’t sure where we were going to stay in Grafton – there seems to be very few caravan parks. After stopping at the store for some supplies and getting some tips from a local we decided to check out the showgrounds which apparently allowed camping. If that looked bad we were going to plump for a hotel. Well, the showgrounds had multiple caravans already parked and looked safe enough, and at $20 it was a pretty good deal so that’s where we have ended up. We walked around a bit to see where to camp and one of the caretakers pointed us over to the old bar with a covered area where we could camp. It is a decent spot, the bathrooms (with hot shower) are pretty good and I think it will be quiet after the sports practices in the nearby sports field (currently field hockey) are finished up. 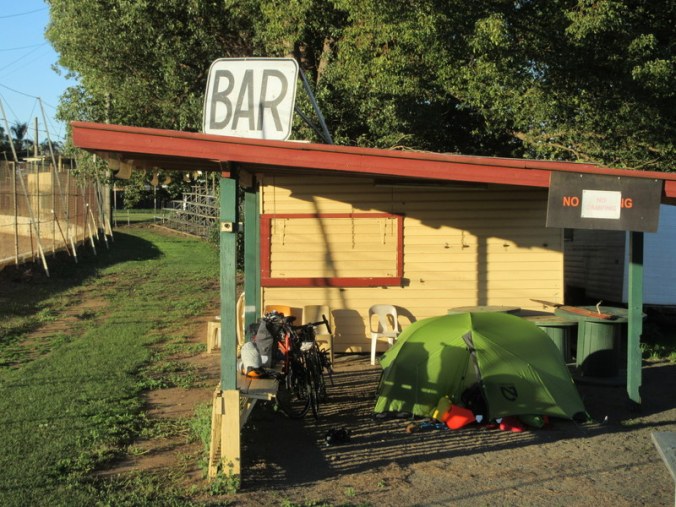 And to think, Nancy wanted to get a hotel. Talk about getting upgraded. Too bad the bar wasn’t open.

It’s dark already, we have eaten and now I have finished by ‘guest contributor’ blog (or at least I think, depending on what Dave does to it). It’s time to get my Kindle out and read a book now, I think…