We were up early this morning. While cool, we had an exciting day ahead of us. Thoughts of the Big Banana danced in our heads and there was no holding us back. Of course we had some 50k to ride before reaching Coffs Harbour so we had to a keep a lid on things for fear of over cooking it!

We had stunning blue skies this morning and enjoyed a short ride out to along the Nambucca River to get us warmed up. It wasn’t long however before we reached Giinagay Way, the road we would take almost all the way into Coffs. Apparently Giinagay means “welcome”, or “it’s good to see you” in the local aboriginal language – Gumbaynggirr. Giinagay Way is basically the old Pacific Highway through these parts, used before they built the new motorway. As such, it’s a pretty good road and most cars take the motorway so traffic is minimal. 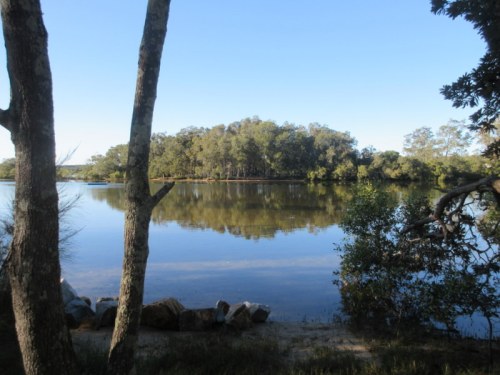 Nambucca River in the morning

We only had a few stops on the highway, the first being at a banana plantation – how exciting to see our first banana plantation. Clearly we are getting close to the tropics now and the plantation was a nice prelude for the excitement we had planned for later in the day. Only trouble was that the banana bunches were covered – perhaps a good thing given the building excitement.

Banana plantation with bananas in bags

Bananas are fairly susceptible to disease

The second stop was at a cafe under a bridge in Urunga. Russ, the cyclist we met the other day, told us that they serve the best coffee in Urunga so we skipped all of the other cafes and headed there. Unfortunately, the bridge cafe was on the far side of town and neither of us remembered that Russ told us it was closed on Monday until we arrived. And yes, it was closed. Oh well, we pressed on knowing that we’d get a coffee in Coffs.

Right here, but no on Monday

We reached the end of Giinagay Way and had the choice of 20k winding roads with lots of turns to look up or 10k straight into town on the motorway. Google maps cycle route took us on the motorway. Komoot told us to take the winding route. We debated for a while then the Banana anticipation won out. We took the motorway.

What we will look like soon, on the dreadful motorway

I can’t say anything good about the motorway other than to say that we survived. The first 5k the speed limit was 100kph and there wasn’t much shoulder. Plus there was often a guardrail, meaning we had nowhere to get off the road. Way too many cars buzzed us in a white knuckle sprint. The second 5k the speed limit drop to 60kph and traffic was better but now we also had driveways and stop lights to deal with. I can’t imagine how the people living here put up with a motorway full of trucks, buses and everything else going up and down the east coast being dumped on to their main street, but that’s what happens in Coffs Harbour. We were thrilled pull off at the shopping district and find a cafe for lunch and general nerve calming. 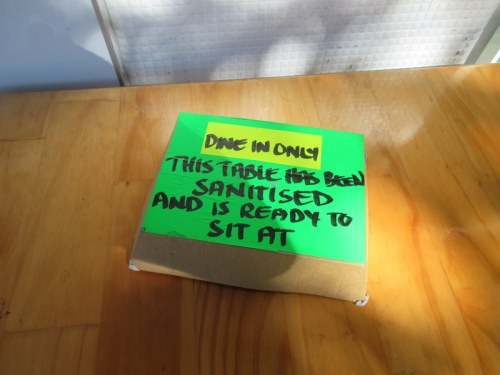 When you sit down, they turn the box over so that they remember to clean after you leave and no one else sits there

Nancy’s lunch – yup, beans on toast. I know, what was she thinking?

After lunch, there was nothing left to do but ride out to the Big Banana. We had to go back out on the highway/motorway but we knew the drill now and it was only 3.5k.

So, we made it to The Big Banana! WOOHOO! 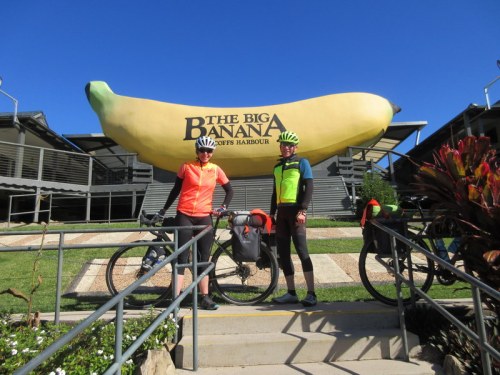 Us at The Big Banana

Nancy at The Big Banana 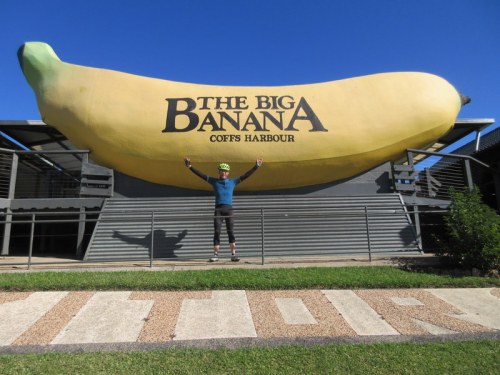 Woohoo – Dave at the Big Banana

The banana sits right on the highway and you can’t miss it, coming just after the crest of a small rise. We (ok, maybe just me) were super excited to crest the hill and spot the Banana. Sometimes these big built up moments don’t live up to the hype but today, I’d have to say that The Big Banana exceeded expectations. Right Nancy? Now wait a minute, she was just here a minute ago, where did she go? Nancy? Nancy? Anyway, take my word for it, like me, she was pumped and stoked! We took heaps of photos, settled in for a slice of banana cake (they didn’t have banana cream pie) and just enjoyed the moment – we’ve gone Banana!

All smiles – made it! 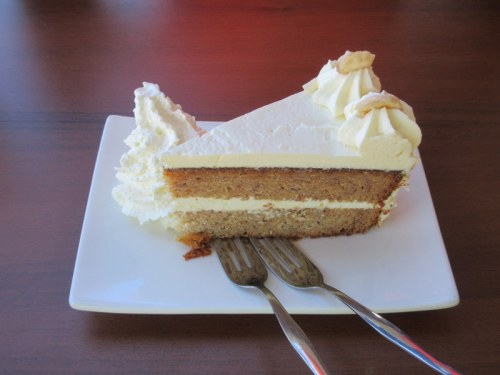 So… What’s the twist?

The twist is the weather forecast. The rest of the week calls for brilliant blue skies here and some rain in Sydney. Add to this, Nancy thought it would “be fun” to ride all the way to Byron Bay right up near the Queensland state border. Who am I to argue? When your wife is having so much fun that she wants to stay out riding another week, well, you just go with it. 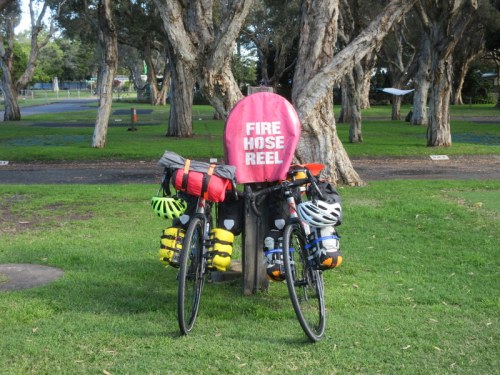 For those still following, that means another week or so of blogs. We’ll escape Coffs tomorrow and head for Grafton. We’ve found what looks like a magical back road through the ranges and as noted, blue skies are forecast. What the heck, happy wife, happy life!

This entry was posted in Uncategorized. Bookmark the permalink.