Saturday night was party night at the GVBR. We still had one day to ride but it was our last night of camping and many of the riders were up busting moves to a 80s band in the main pavilion. We weren’t – too tired. The music kept us awake for about 2.5 seconds. The only sound we heard really was the end of the party when the dance champs returned to the tents. They bothered us for another 2.5 seconds and we were back to sleep – it’s been a long week on the GVBR! 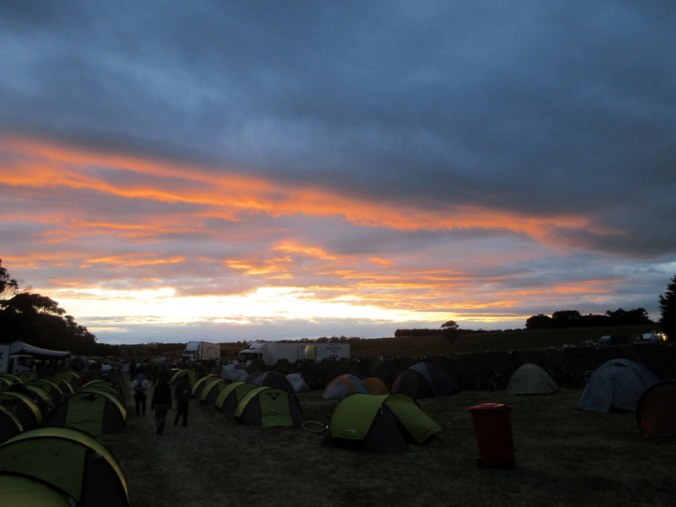 Sunset on the last GVBR campsite

Sunday morning we were up early, keen to reach our marshal point down on the coast just shy of the lovely seaside village of Lorne. We had a nice, if not a little lumpy, 23k spin through the Otway Ranges to start our day. The road was closed to traffic just for us and it was fairly scenic. It may have been as nice as yesterday’s Turton’s Track but threatening clouds and a few random drops of rain had us focused more on moving forward than stopping and smelling the roses..

Working windmill in the Otway Ranges

Santa visiting a remote house in the Otway Ranges

We reached our checkpoint with enough time for me to ride ahead to Lorne to get us a warm up coffee. I wasn’t sure how I was going to get two coffees back to our corner when up popped Richard, a fellow marshal who, due to illness, was driving this year. He hopped in his ute, drove back to our point and even walked Nancy’s coffee up to her on the hill where she was positioned to try slowing the riders coming off the ranges towards our corner.

Lorne beach benches with a view 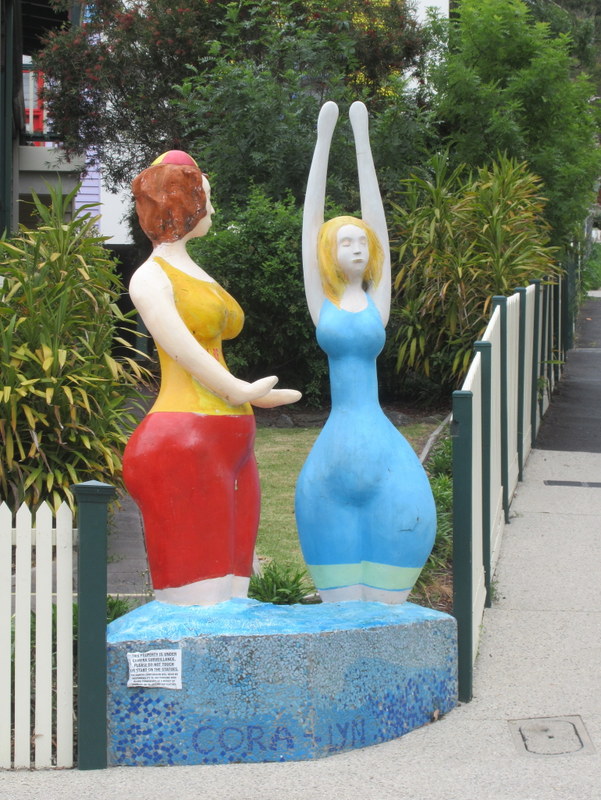 And what a corner we had. It was sort of confusing as the riders had to go through the corner to reach Lorne, then later, come back through the same point to get back out onto the Great Ocean Road. That meant there were two sets of signs that confused some riders. Roman and I had roundabout duties. And as noted, Nancy was up the hill. She really had the hardest job as it was raining now – the road was wet and as the road had been closed all the “Ricky Racer” young guns were screaming down the hill (why are all the speed demons Ricky and not Rhonda – hmmm – makes you think). As I understand it, a number of stern words were spoken by Nancy and a few disobedient riders may have been in danger of being reported had it not been the last day. It’s one thing for “Ricky” to put himself at risk but to endanger rule abiding fellow riders, that’s when you have to pull them up. Well done Nance! What a great marshal you’ve become – no more jokes about your training sessions – promise J

Roman, Nancy and I agreed that we’d skip the 1.5k riding into Lorne once our corner was completed. There was no point riding into and then back out through the other riders. We headed straight out east on the Great Ocean Road. The road was supposed to be closed in our direction but for some reason it wasn’t. I’m not sure what happened there but there were way too many cars for a closed road. On top of that, it was quite rainy so unfortunately we didn’t get to see much of the amazing scenery of the Great Ocean Road.

It was all gray today – one non raining moment 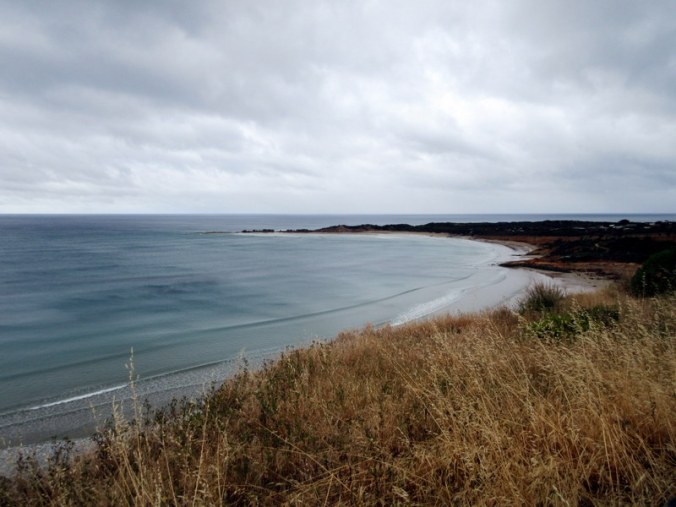 Looking the other way

The last 30k we rode through the seemingly endless suburbs of the towns that have spilled out down the Great Ocean Road from Melbourne – lots of roundabouts, traffic and spray from the wet roads. There is one particularly bad roundabout in Torquay where things got a bit dicey. The police had given the three marshals on the corner some really bad directions and then left them to manage two car lanes, heaps of traffic and 4,000 bikes. We got there and were completely confused which way to go. Roman went the wrong way.  One woman ran into Nancy and fell (Nancy didn’t fall). We tried to help the marshals and told them to just ignore the police instructions. We would have preferred staying longer and helping but we had to get to the finish so that we could make our flight home. We called event control and they were quickly on the scene with police – this time with police who stayed to help and agreed to adjust the earlier order. It all worked out in the end but it would be safe to say that the hardest day for corners, for marshals and for tired riders, was our last one. We know of a number of riders who came down, in addition to the one who hit Nancy.

Headwinds and rain made the last 5k hard and not overly fun to ride but there was a massive crowd of people cheering us into the finish line. Getting through the ride safely and having a rock star reception made all the hard bits quickly fade.

In previous years there were shower facilities at the finish but this year they didn’t have them. In addition, even though we finished at a school, there was no covered or indoor area for packing bikes or changing clothes. This meant that all of the riders and all of the bike boxes, including the cardboard ones, were sitting out in the rain – oops. We snagged a spot under one of the few trees on site avoiding some of the rain but it was a challenge getting organized for our bus/plane trip home. We even changed clothes in the back of one of the transport semi-trucks, taking turns to watch the door, as there were no changing facilities either (other than in a portable toilet, which wasn’t too appealing).

We eventually got ourselves sorted and hopped an event bus back to Melbourne and a taxi out to the airport. All afternoon until we finally arrived at the airport, we felt like we were just barely keeping on schedule. We needn’t have worried too much as when we checked our bags, we learned that our flight to Sydney had been delayed. There were several Sydney bound flights before ours and several after but we didn’t think it was worth changing flights.

Maybe we should have…

Our flight ended up being only 45 minutes late but those 45 minutes was enough for the crew to reach their flight time curfew. Meaning, they were too tired to fly our plane. A new crew could not be located on such short notice and by now, all of the other Sydney bound planes were full or had departed.

So, we ended up spending a night at the Hyatt hotel airport in Melbourne, courtesy of Qantas. We heard several different stories from the Qantas staff at the airport as to the cause of cancellation. If crew flight time curfew really was the cause, then they are significantly overly optimistic in their scheduling – if a 45 minute delay causes flights to be canceled, something should be looked at. At least it would be if it were my business.

No wait, that’s not our bedroom

And that’s not our bathroom – oh well, it’s a night out…

Anyway, we didn’t need to be home last night so we just rolled with it. We managed to negotiate a late morning flight so that we could have a relaxed brekkie at the hotel and also for Qantas to keep our bike boxes at the airport – so that we didn’t have to schlep them hither and yon.  Today was our Groundhog Day – back to the airport, print new boarding passes, check the bags, be asked if we knew where oversized luggage was, clear security and head for our gate. Today’s flight was also delayed, but this time 45 minutes didn’t put the crew over the limit – we made it home mid-afternoon – phew, what a trip…

Two days in a row in Melbourne Airport is enough

Mechanical issues for riders:   One, wow what a difference from past trips where I helped with heaps of these issues. Better bikes? Better prepared kids? Not sure…

Will we be back?:                          Probably yes. It’s always a hard question to answer while still dealing with fatigue but overall, it was a really positive experience, a great way to see parts of the country we’d not seen before and a fantastic way to contribute to the cycling community.