Back on the road today – we were really looking forward to riding out of town with a tailwind.  The day we came in we had that smashing 90kph headwind and for the last 3 days while we were in El Calafate, the wind was pretty strong coming off the Andes creating more tailwind anticipation.  So this morning, when we got up and looked out the window and saw still trees, we didn’t worry.  We knew that the winds would come up by the time we were ready to ride.  We would soon be flying with a friendly tailwind, right, right?  Hey, wait a minute, that’s not fair, how could it be, at 7:30 when we rolled out, it was still completely calm?  Bummer.

Fair winds or not, it was a nice morning for a bike ride.

Views of the Andes as we leave town

El Calafate is not large and at the edge of town there is a clear demarcation, buildings end, Patagonia steppe starts, immediately.  From town to our campsite 116k later, we saw three buildings, including the abandoned police station that we are calling home tonight.  There was fairly light traffic and we could have been forgiven for thinking that the world had ended again.  There are no trees, no buildings, no people, no anything, just distant views of the Andes, a whole bunch of wild guanaco and the odd rhea. 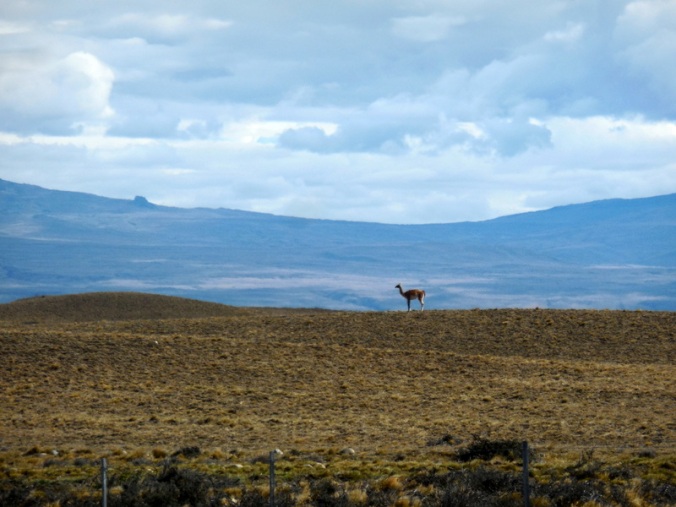 Had it not been for two lovely Colombian cyclists that we met at about 30k from town, we would have not spoken to any other people all day except each other.  Not that we mind each other’s company, it’s just odd – we didn’t expect Patagonia to be as remote as we’ve found it.

We had a pretty good climb that went from 40k to 60k.  Until here we had almost no winds, perhaps a little head/side wind, but not much.  On the climb we picked up a little tailwind but it was minimal as well – it wasn’t blowing hard enough to keep the pesky little flies from annoying us.  There was a nice viewpoint at the top of the climb where we stopped and talked to, well, each other.

From the view point

View point sign – nearly all of them are motorcycle tours

After the climb we had 35k of slight tailwind and downhill.  Looking at the maps yesterday, I had thought that this section would be a headwind and slow.  To have it end up being fast didn’t quite make up for the morning no-tailwind section but it at least balanced things out a little bit.

At kilometre 95 we turned southwest and again the wind did not smack us like I thought it would.  We had unsealed roads for the next 20k but they were not too bad.  We heard that this road, a short-cut of 90k over the sealed option, was almost not worth taking because the ripio (gravel) was so bad.  We have another 42k of it to ride tomorrow but so far, so good.  If tomorrow’s surface is like today’s, we’ll be laughing.

Nancy floating over the dirt road

This guy was at the start of the dirt road – the grim reaper perhaps? 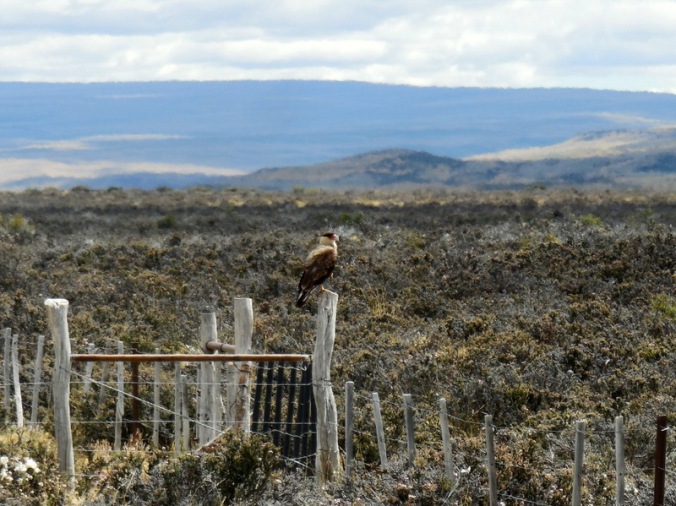 Caracara of the Patagoina stepp

Home sweet home – though the tracks make it look less abandoned than we thought it was – only on car came all night, it continued on down the road to the right

We came off a small hill down to the Rio Pelque and could see our home from a long ways off.  We are staying in an abandoned police station.  This is another one of those famous Patagonia cyclists’ stop.  It’s only been in use by cyclists for a couple years so there are fewer signatures on the wall but we still spotted some folks that we know.  Overall the building is pretty clean and the near-by creek made an excellent spot for cowboy showers. 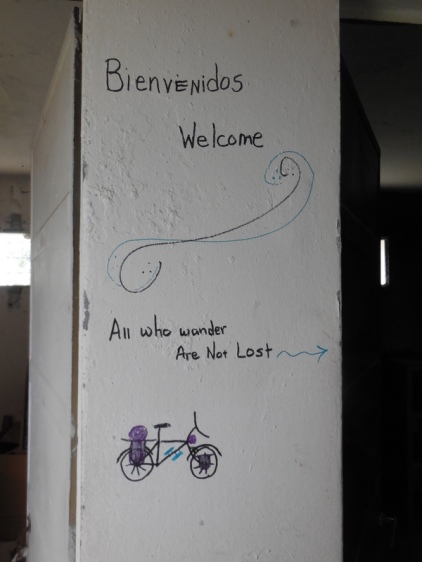 It usually takes some time to get set up at these places because we usually have more chores.  Today we had to do some sweeping, move some furniture around and filter drinking water for tonight and tomorrow.  Of course we also have to cook our own food and clean-up after ourselves.  Dinner was taken in the police dining room, on some not so fancy mismatched furniture.  But we still enjoyed it.  And of course we had some stimulating conversations with, well, with each other, again.

And just to be clear, we aren’t sleeping in a jail cell or anything.  It looks like this place was more of a house for local policemen as there are multiple small rooms that were likely bedrooms.  We have taken one of those and set our tent up in it (Nancy sleeps better when she knows the bugs can’t get to her).  We are packing our food up tight as there is evidence of mice about – though there is a very cute kitten outside that may become a good mouser.  Unfortunately, it looks like the kitten’s mother has met an untimely end out on the steppe – hopefully the kitten will survive.

It’s an early start Nancy, put the camera down and come to bed!

We are debating tomorrow’s destination now.  We have a couple options.  None of them end in a nice hotel with fluffy pillows and hot shower, but some seem like better options than others.  We’ll be up early to beat the wind and are hoping that our good luck on this road continues.