Today’s blog title might make you think that this post is for two days – it isn’t.  Long-time readers will know that the smell of the open barn door is a strong pull for us.  Today was no exception.  We had strong tailwinds and thus decided to push on rather than stop at the planned 50k mark.  It was a brilliant day overall, one of the best of the trip.

We were up early at our lovely glacier view wild camp site.  We had blue skies and a full view of the glacier.  What a treat.  Andy and Sarah were up about the same time and camp was a hub of activity as the four of us went about our normal morning chores to get ready to ride.  We have all four been on the road now for more than a year and a half – you might guess that we’ve become well oiled machines in the morning.  Few words were spoken at either tent site as there is work to do and jobs to accomplish.  We were all ready to ride at 8AM, even with some time wasted staring up at the hanging glacier overlooking camp. 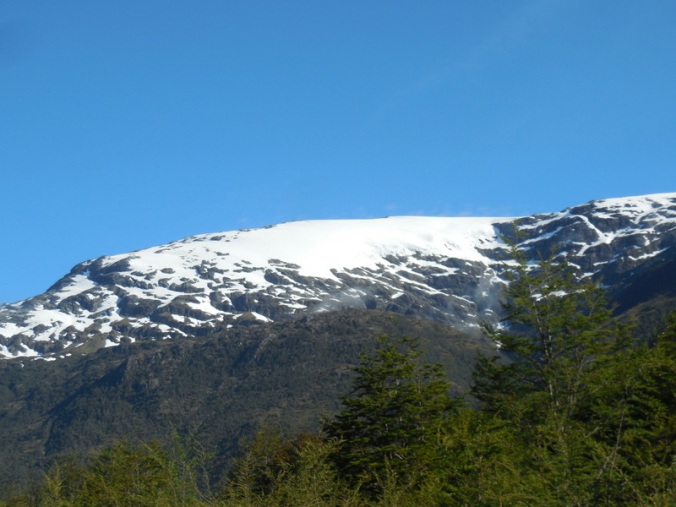 We camped directly below the ragged edge of the glacier, in the middle of the photo.  It looked a lot bigger staring up at it!

Nancy cresting the first hill – with “our” glacier in the background

Patagonia mountains in the morning 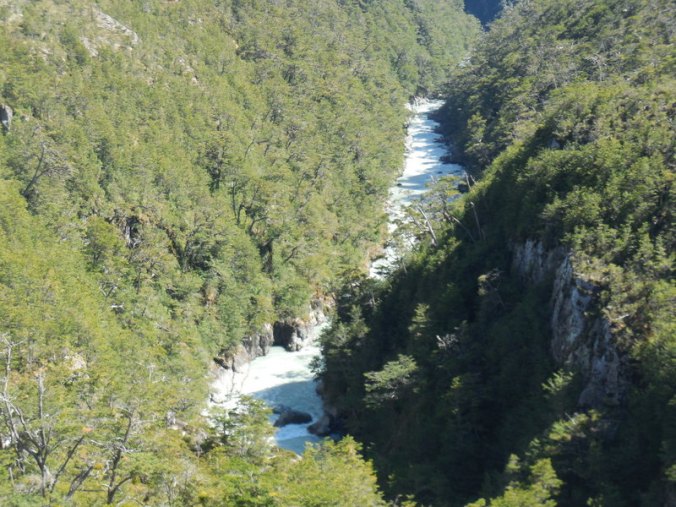 The river we camped on last night, we had to ride up and over a few hills as the river canyon was too narrow for a road

We started out more or less together and hop-scotched each other for the first couple uphills and downhills.  We had nice views out to the surrounding mountains and some steep uphills to remind us that this is the Carretera Austral.  At the top of the second climb we stopped to chat with Urs, a Swiss rider heading north.  Prior to this point we’d seen a few condors way up high flying near the peaks but what came next was really a magical moment that none of us will soon forget. 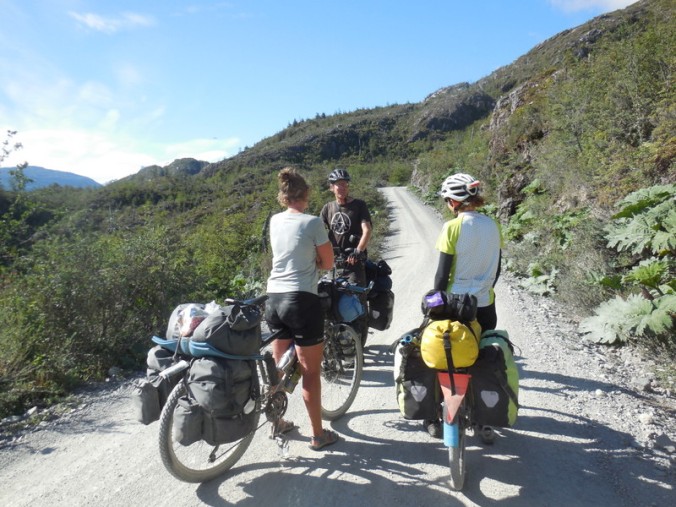 As we stood in the middle of the road talking to Urs, what looked like a juvenile condor began circling us (I’ll call it a “he” for the purposes of this post).  He still had a few feathers that looked a little down, so we assumed that it was young.  He seemed to have just learned to fly and was still trying to work out the whole wings thing, making lots of micro twitches as he flew.  While young, he was still massive and he was very interested in us.  There was a strong wind from the west coming over the hilltop and he seemed to relish hanging motionless in the wind just above our heads.  When he drifted too far to the west, he’d circle back around and hang out above us again.  This went on for a good fifteen minutes and only stopped because we couldn’t afford to spend all day standing on a mountain top watching a bird circle, even an amazing condor.  We managed to get some pretty good pictures but eventually we just put the cameras down and watched.  A magnificent bird gave us a once in a lifetime show of his new flying skills.  What a treat.

A nice view of a condor – but…

And still closer – this photo is not zoomed! 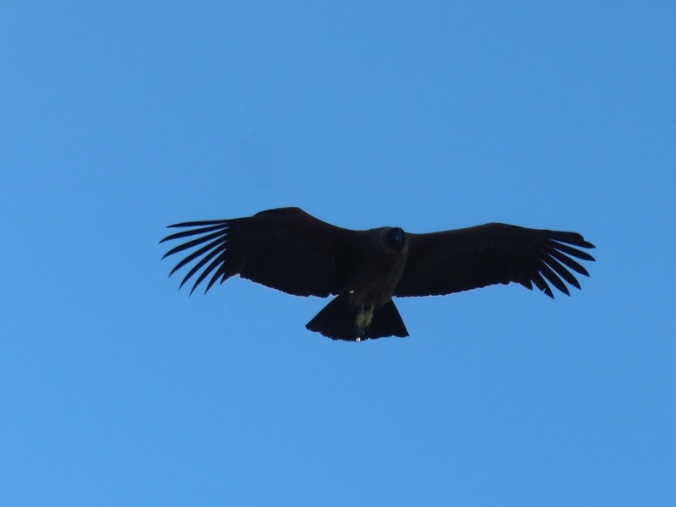 Everyone looking at everyone – photo is not zoomed

We still had two more “red zone” climbs before topping out on the Villa O’Higgins Plateau, and they were short but tough climbs.  The Carretera Austral was not planning on letting us finish without a serious effort.  The road surface today was more or less ok, more smooth than bumpy.  At the top of the last pass we had some nice mountain views and a pretty steep downhill.  We don’t really like the downhills on these dirt roads but it is easier than going up. 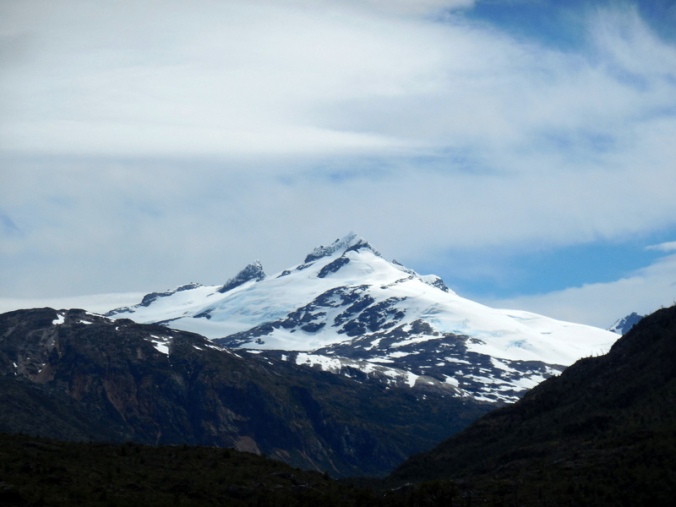 And more – can’t get enough of these

The ride through the plateau was a ripper, mostly due to the strong westerly winds whipping up along behind us.  There were some little ups and downs but the wind made easy work of all of them.  If the surface had been sealed, it would have been a dream ride.  As it was, we had to slow to deal with the rough bits.  We still managed to reach our planned campsite before 2PM and we knew at that point that we’d be pushing on.  With only 32k to go and the tailwind, what else could we do? 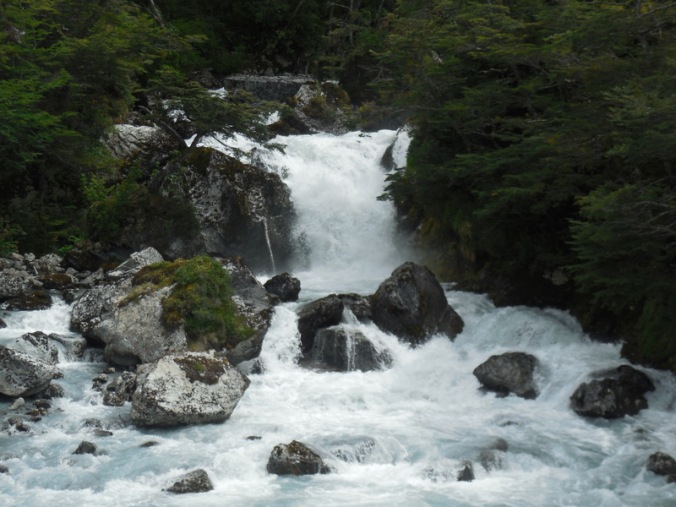 Swans (I think) on a lake in the plateau

Nancy powering ahead in the wind

We made a couple stops, one for a late lunch and one for a Snickers bar, but mostly we just rolled along.  At lunch I lowered the tires to their absolute minimum and that did wonders for smoothing out the road.  I’m not sure why I didn’t do that earlier (Senior editor’s note – hmm, why didn’t he do that earlier than the last day of the Carretera Austral…) but they were already lower than normal and the roadie in me hates to ride under inflated tires.  There was a short section where the road turned back into the wind but it was not too bad and we rolled into Villa O’Higgins at 4PM. 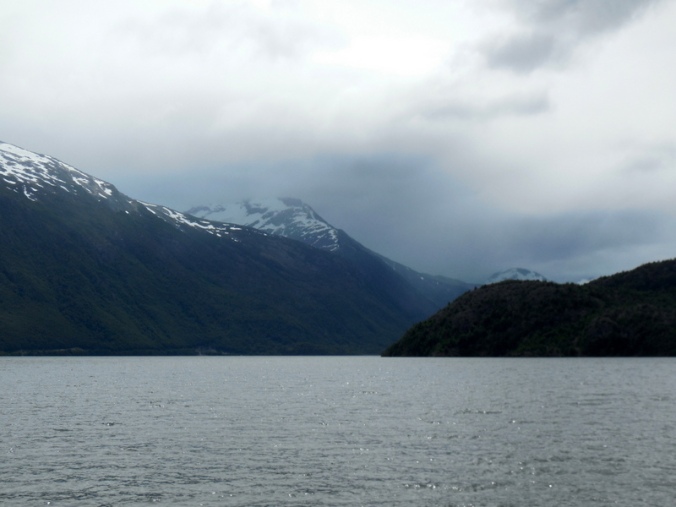 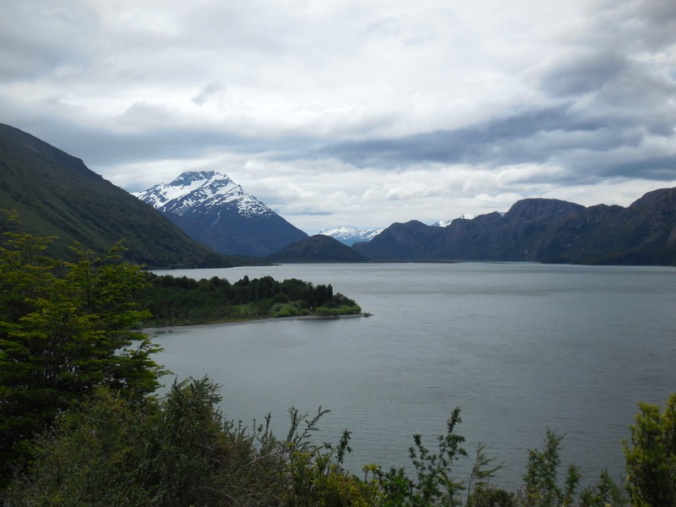 It was actually quite amazing to reach town.  We’ve both read so many blogs of people coming here, to actually reach Villa O’Higgins ourselves, all the way from Alaska, well, it was a great feeling.  The Carretera Austral was a lot harder ride than we thought it would be but the scenery more than made up for any riding difficulties.  We had some weather, but had more blue than rain, so we’re happy in that department.  The bikes and equipment all performed well, with only a few minor running repairs.  Our bodies, well, they are stiff and sore – but we’ll recover, after all we made it this far. 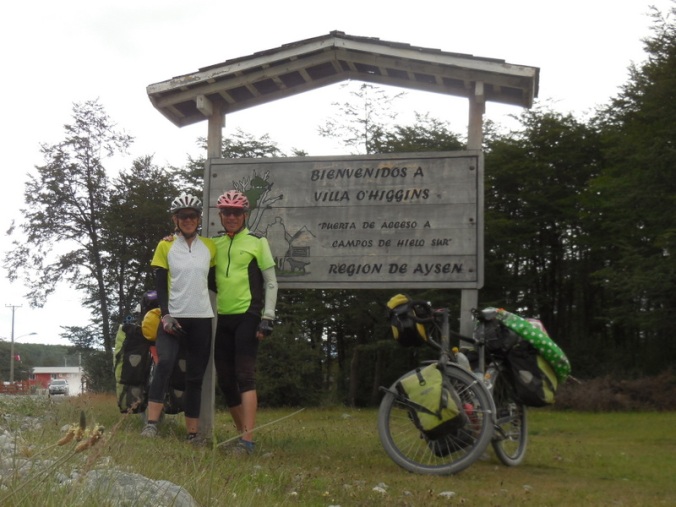 We stopped at a bicycle-heaven hostel called Mosco and snagged their cabana, as all of their private rooms were taken up by a tour group.  There are a stack of bike riders here, heading both north and south.  Sarah and Andy are staying here as well after also doing a double day.  The cabana is a little over budget but we needed a treat and good place to recover for the next section, which may be even more difficult than the last one.  Tomorrow we are relaxing, cleaning the bikes and reflecting on being here.  Villa O’Higgins is a long ways from where we started, and really, a long ways from everywhere else.  And the end of the world is not far off now.