We’ve complete day two of the CA kicker – so far, so good…

We ended up being alone in our sad little wild camp last night, that is if you don’t count the cows.  We’re not sure what time they came in but there was a herd of them this morning.  Luckily, we set our tent up where there wasn’t much grass so they didn’t bother us.  As for cars, there were none that we heard anyway – it really is a quiet road.

We were up early and moving fast all morning.  Nancy was worried about reaching the Yungay ferry by 3PM, our planned sailing.  I tried getting some photos but there were lots of “hurry along looks” from my senior editor – my photos are not great as I was pretty quick on the draw for most shots.  You have to keep the team happy sometimes.  For the record, we reached the ferry 2 hours ahead of schedule – ah, why worry, eh? (Senior editor’s note – but you never know, we could have had a flat tire, the hills could have been really bad, etc.  Better safe than sorry.) 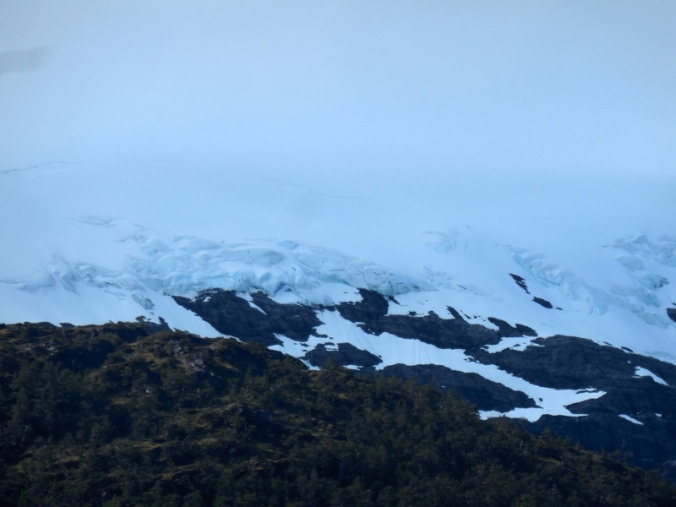 Morning view of nearby glacier 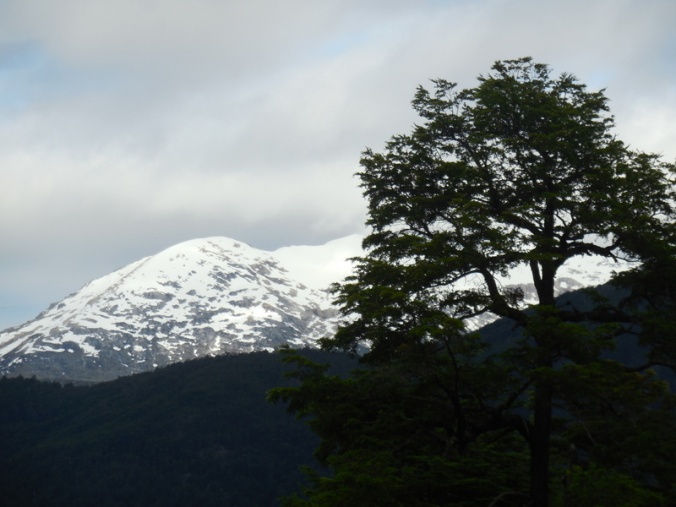 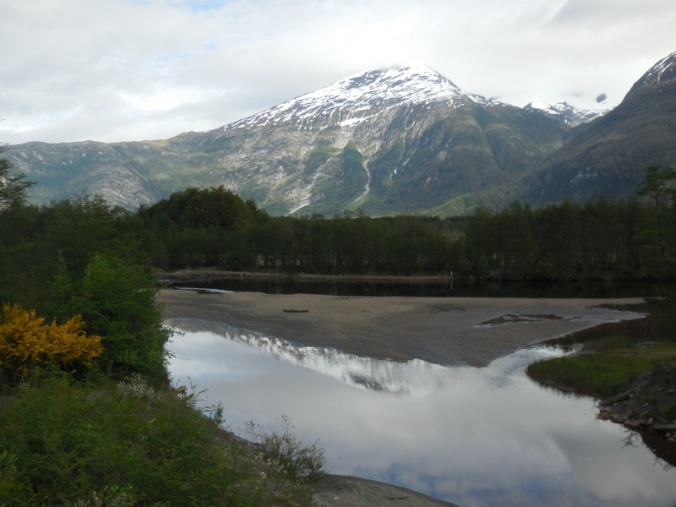 The road surface was pretty good this morning, better than it has been – much smoother and less rocks.  Early on we passed a section that was graded only 2 weeks ago and it was still bumpy but this didn’t last very long.  Generally flat and smooth roads made for faster than normal CA cruising speed (and more time for photos – not that it was allowed).

We had one major climb today – up and over one of the fjord mountains from the Tortel canyon to the Yungay canyon.  We actually thought that the climb would be a real time sink but it turned out to be fine.  It was quite steep in places but we managed to ride it all, no walking or pushing.  Sometimes having Nancy in front of me is a real inspiration – I mean if she can ride it, then I can (or have to) ride it.  I hope that doesn’t sound overly chauvinistic – it’s more about the ongoing “game-on” competition that runs through our marriage.  Nancy would say that she is not competitive but if I walked where she rode – I’d probably hear about it for a few years/decades (Senior editor’s note – hmm, now who was it that won the 10,000 mile challenge this year…).

The climb went up a real narrow box canyon with lots of water falls and steep drop offs.  At the top there were a series of summit lakes formed by the retreating glacial moraines.  It was quite spectacular to see when you could catch your breath.  The downhill was equally stunning but very steep and most of the time you had to keep your eyes on the road.  There was one pitch that had cobblestones – for the cars coming up but honestly, it did not seem as steep as our road going up was. 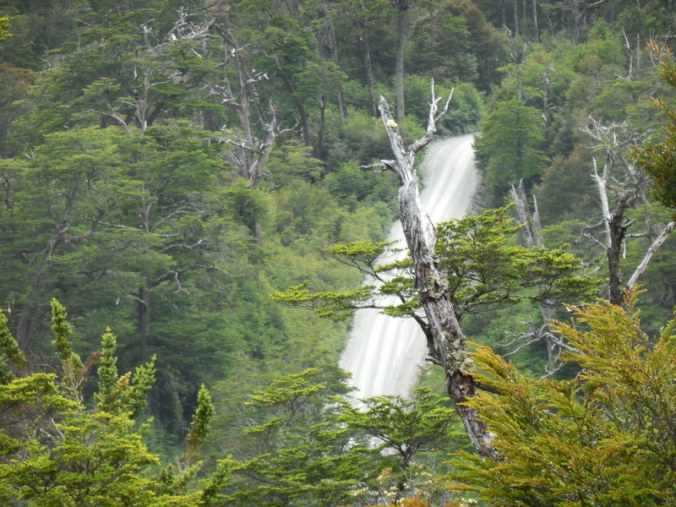 That’s our road, after we go down a steep pitch, we have to go up that beast 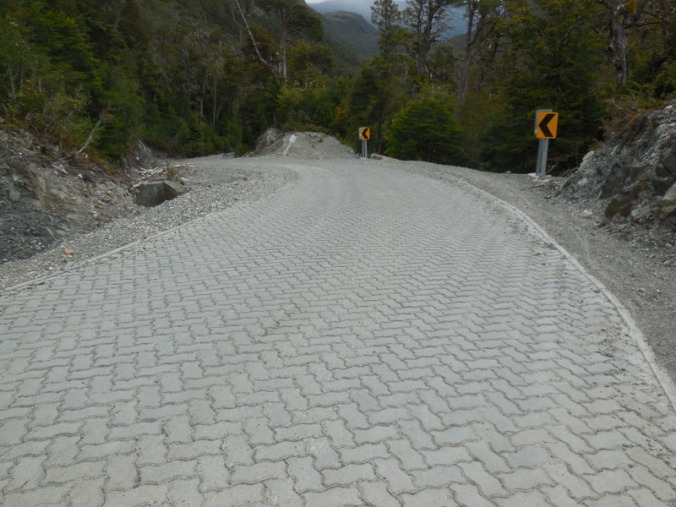 So steep that they paved

We reached the ferry with heaps of time.  It was great having lunch sitting in the sun of the ferry terminal and watching all the other ferry passengers arrive.  The ferry could only take 12 cars and our boat had to take a large tour bus.  The bus filled so much of the ferry that two big trucks were not allowed on. 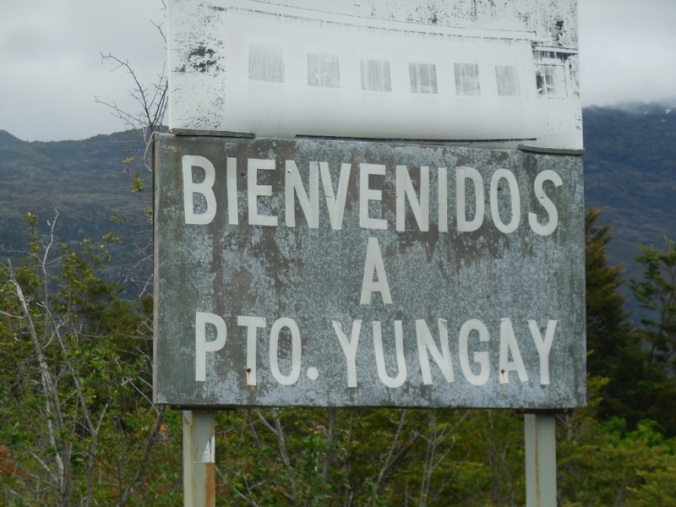 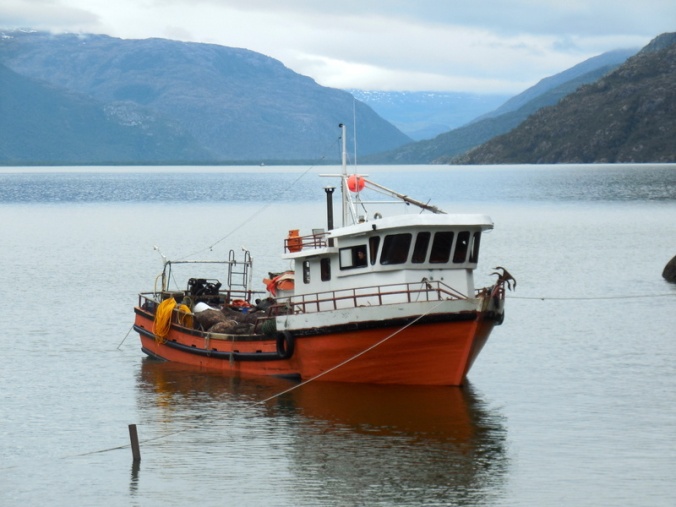 Puerto Yungay is at sea-level, these guys were in port to resuply 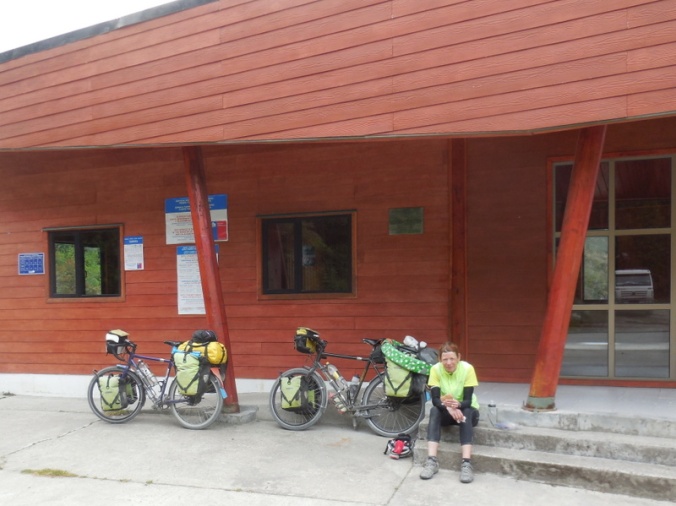 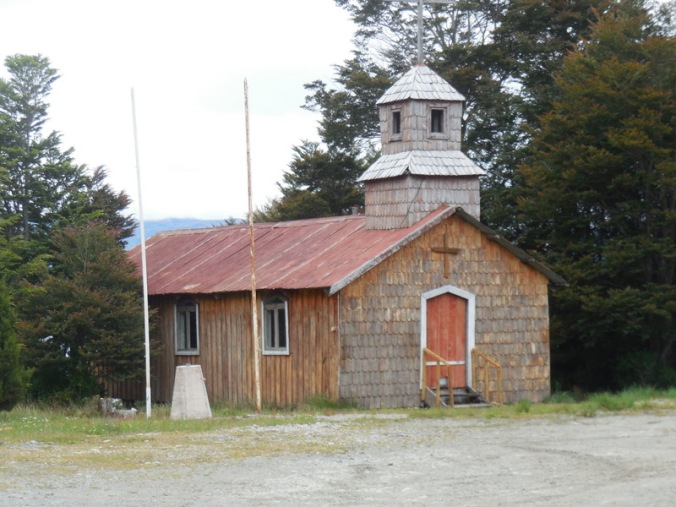 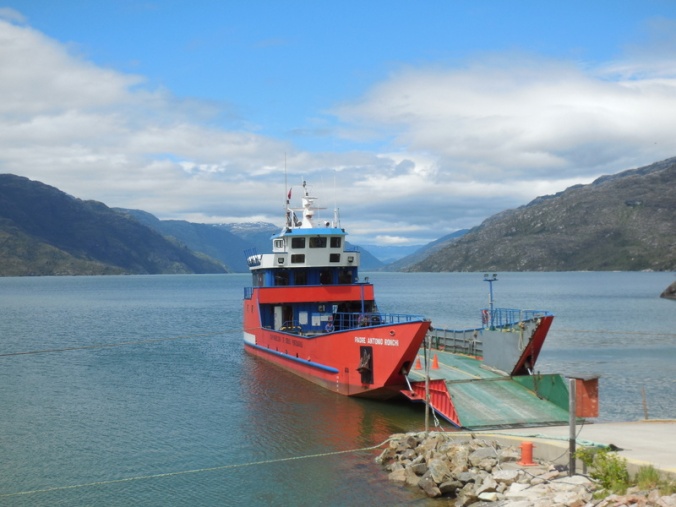 While we were sitting there, Sarah and Andy rolled up – they camped 2k before we did last night.  The ferry ride up Mitchell Fjord was nice with very calm seas.  We have been so lucky with the weather the last 10 days.  Sarah and Andy were going to camp at the far ferry terminal building as they thought there was only a ferry at 6pm but we got to talking and they decided to ride with us 17k up river to a fantastic wild camp site on iOverlander called Glacial View Campsite. 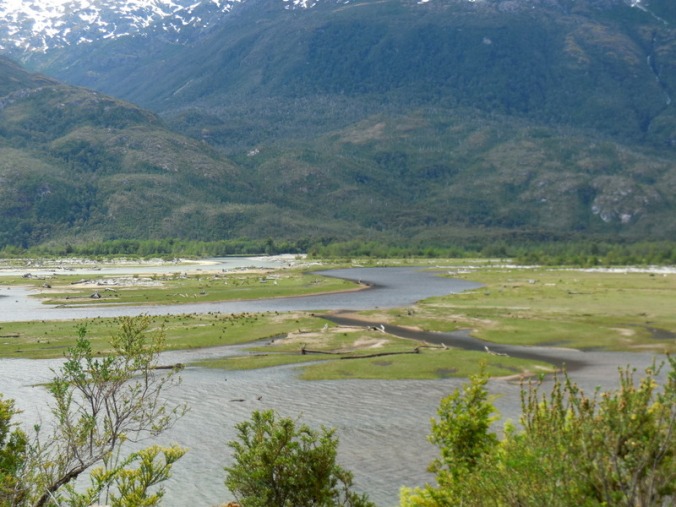 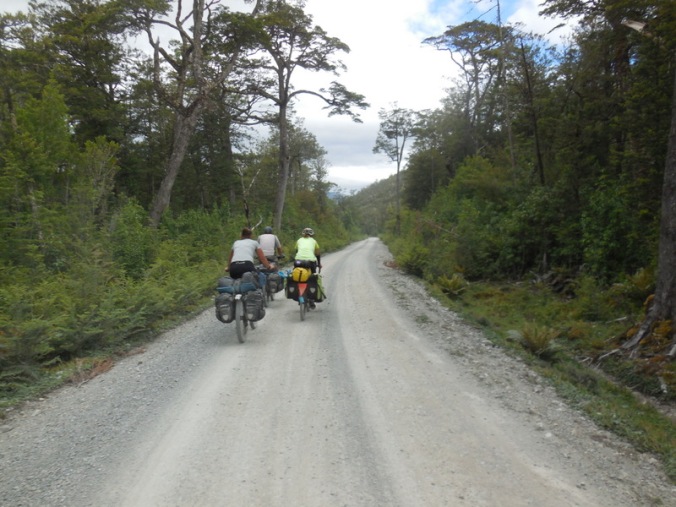 Sarah, Andy and Nancy – no prizes for guessing which side of the road is smoother 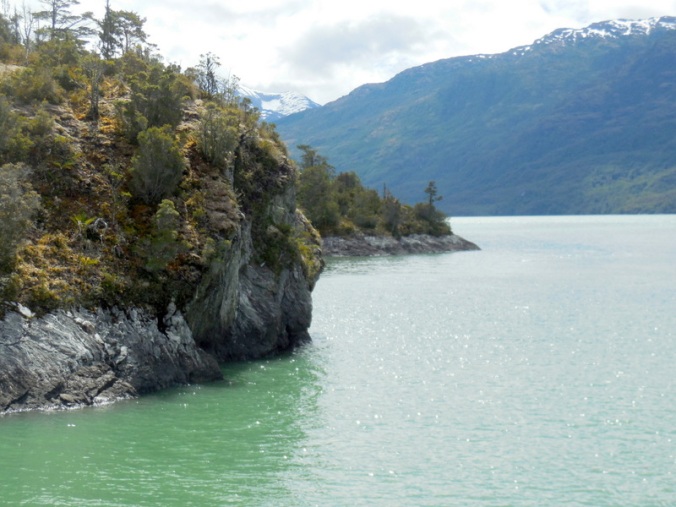 We have a massive milky jade green river running alongside our tent as we look up at a hanging glacier on one of the nearby mountains.  There is even a small stream to get water from so we don’t have to use the silty river water (we filter).  It was downright civilized eating dinner as the sun started to go down – did I mention that we are lucky with the weather?  You don’t get views like this every day in Patagonia.  It was nice having some other folks to share it with. 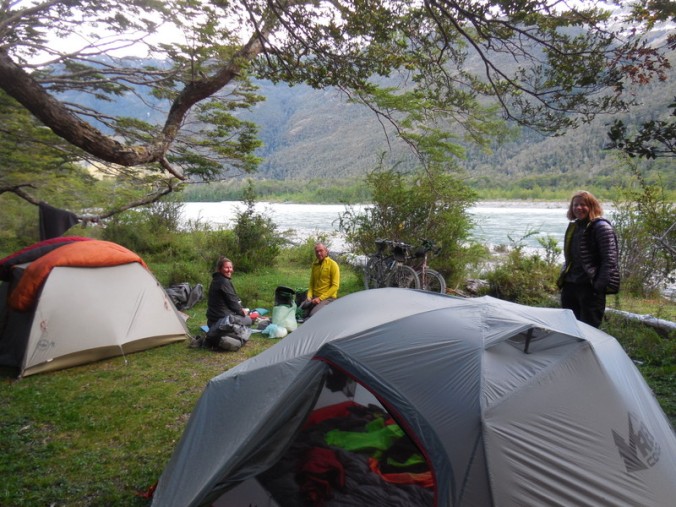 We could probably make it all the way to Villa O’Higgins tomorrow but we are only planning on riding 50 of the remaining 82k.  There is rumoured to be a nice refugio there and we have plenty of time in our schedule.  There is some climbing to deal with as well, so why push it?  There is potentially some rainy weather coming in over the following days but we’ll deal with that when and if it comes.  We’ve had no internet for a couple days so who knows what the current forecast is.  Life is good wild camping off the grid in remote Patagonia.