We had another super quiet night sleeping on the river.  I don’t think that any cars passed along the roadway, or if they did, we didn’t notice.  We slept without an alarm and were still up by 6AM.  You don’t really need an alarm when you go to bed the night before at 8PM!  We had yet another relaxing brekkie on the riverside while the sun came up and warmed us up.  Our small roving band of 5 cyclists hit the road about 8AM.

Riders in the morning 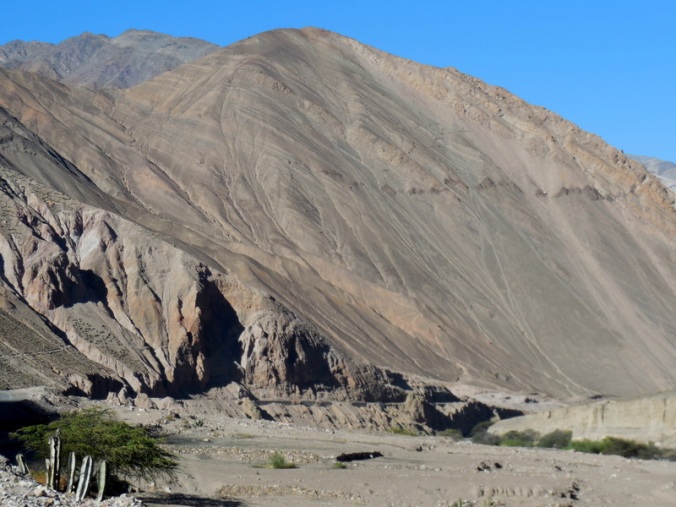 We had about 35k of downriver riding along the Tablachaca River again this morning.  The morning light on the canyon was gorgeous, different than last night just enough to force everyone to make many photo stops.  We had a few more tunnels to go through and a very narrow road until we joined back up with the 3N highway.  There was zero traffic for at least an hour.  Back out on the 3N, we had a centre line and a few cars but the entire ride to our first stop in Chuquicara was virtually a private bike lane. 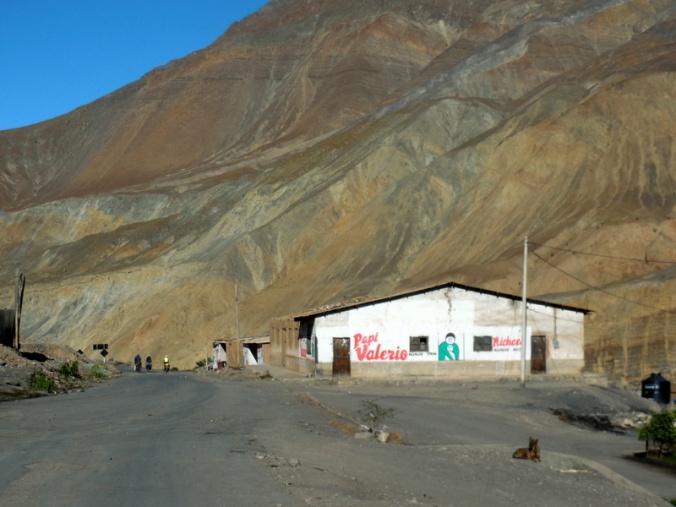 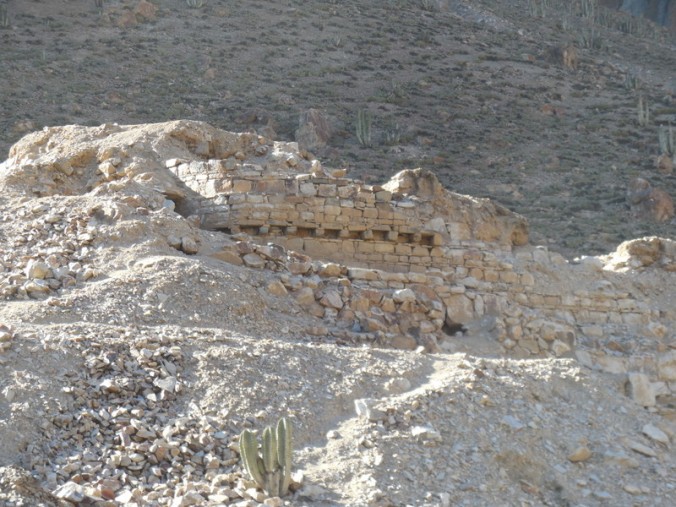 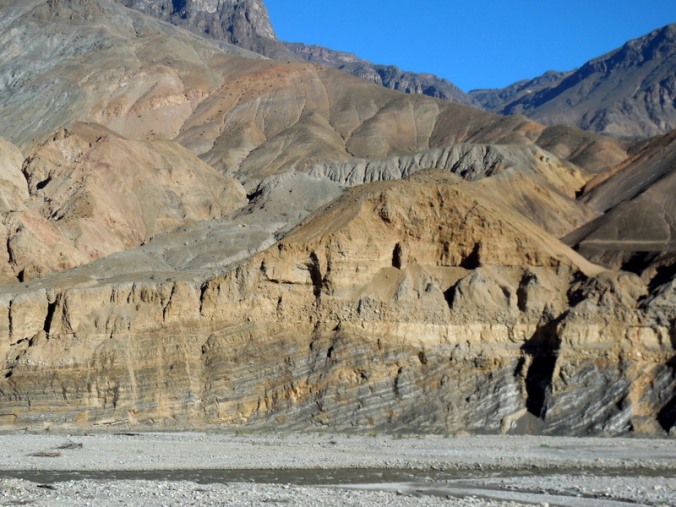 We had read many negative comments about Chuquicara and even gave it a not so nice nick-name of sh*ttown – not so much because we believed every comment, more because we couldn’t remember the real name.  The town was a bit gritty but as these things often work out, the people we met at our stop were super friendly and helpful.  I even found a new girl friend (when she turns 18 of course) – a nice young lass who helped me fill our water bladders.  We had a good 59k uphill left to ride but there was reportedly no water en-route or at our planned campsite.  All of us bought water and had to schlep it up river for the next 4 hours. 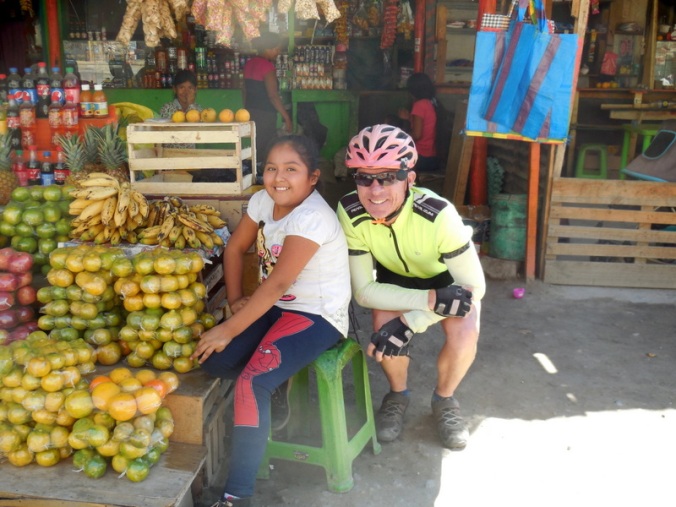 Dave and his Chuquicara girlfriend

For the next stretch we turned left and headed up the Santa River.  We would follow this river for the next one and a half days.  At the bottom the Santa was quite wide and muddy.  The canyon was just as beautiful as the one along the Tablachaca River.  Best of all, the slight headwind we had coming down the Tablachaca had now turned into a ragging tailwind heading up the Santa.  We were climbing gentle 3-5% grades but not working too hard as the wind was very helpful.

It was hot and this roadside waterfall was wonderful 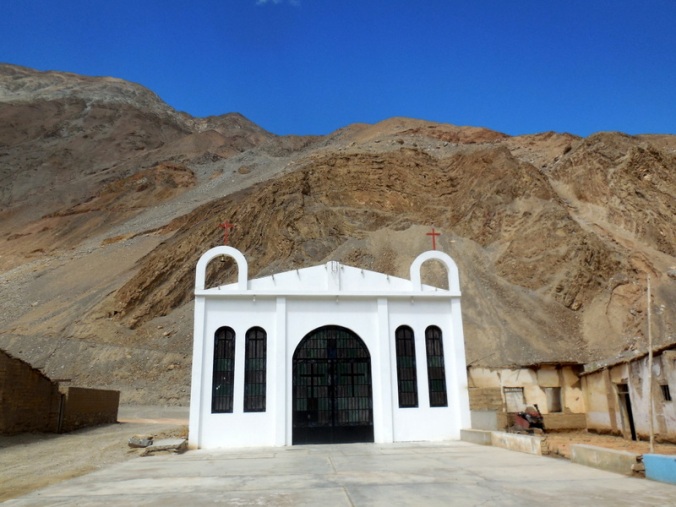 We found two small tiendas on the road where we could buy cold drinks, enough to cool us off but not enough to be a proper water stop – so we were glad that we filled up in Chuquicara.  It was a hot afternoon of riding.  We ran into more touring cyclists in the canyon as well.  The first was a group of three Venezuelan cyclists going our direction (we caught them) – two who’d been on the road for a year, the third for 6 months – all starting in Venezuela.  The second tourist was a French woman who was cycling solo north from the Ushuaia.  She did not like the canyon headwind but still had a great attitude and was pushing hard to get to the top of Peru before her visa expired on 31 July. 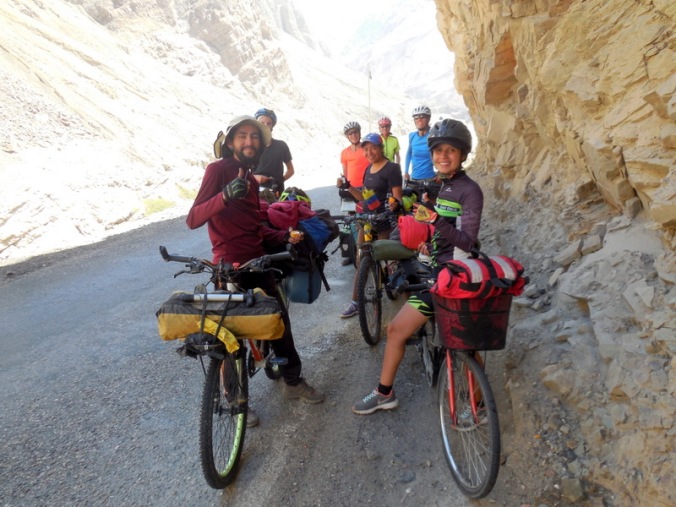 Us and the Venezuelan cyclists 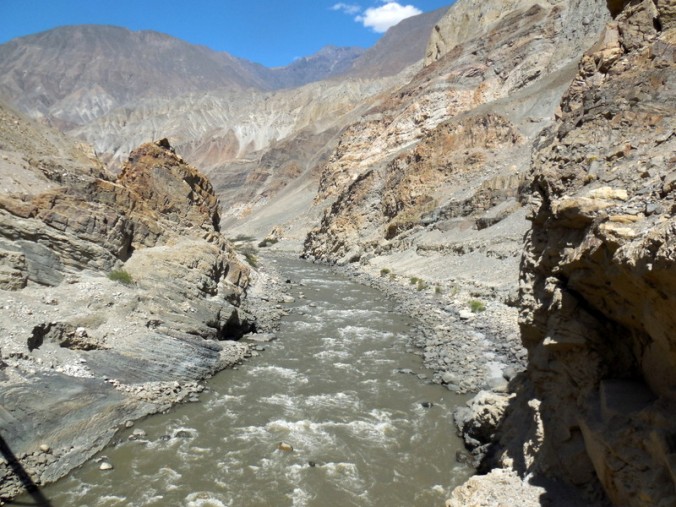 It was getting quite hot towards the end of the day and none of us really enjoyed the last 5k of uphill switchbacks leading to our gravel pit campsite.  The site was ok but not completely obvious as the Germans all cycled past it.  Nancy and I bringing up the rear didn’t have to ride much extra as the others circled back to us when they discovered their mistake.

It was probably too early to set-up the camp as it was still very hot and windy – too windy to set the tents.  We snagged a sheltered spot and were ok but the others had a real battle.  They ended up giving up until hopefully the wind died down and headed for the nearby irrigation ditch to have a “cowboy” shower.  We got our tent up and then had cowboy showers ourselves.  Being our third night in a row of wild camping, we were happy to have water, even irrigation water to wash up with.  The only issue being that the ditch was right on the road and we had to duck low when a couple cars passed.  The Venezuelan cyclists passed just as we were getting ready to strip – lucky we still had clothing on – haha.  (Senior editor’s note – I tried not to think of all the animals we heard around the area that might have provided some not-so-nice additives to the water… It looked pretty clean but I certainly wouldn’t drink it!  You take what you can get when you are hot, sweaty and dirty.)

As the sun set the wind died and the others got their tents up.  It was our turn to cook – that is our turn to use our stove to cook everyone’s dinner, so it was good that we were a little ahead of schedule.  It is nice travelling as a group as you can share camp duties, and of course feel safer staying at these wild camps.  Sunset over camp was wonderful and once again we had clear starry skies overnight.  Everyone was super tired but satisfied with last three days of hard riding – lights out in the tents was once again early for everyone. 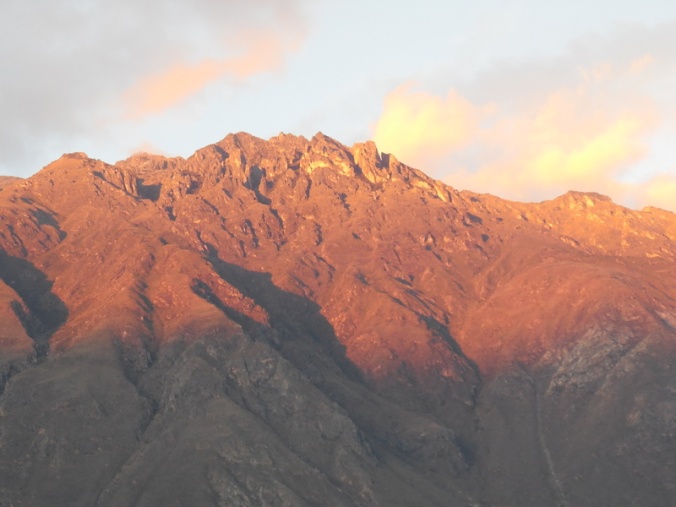 Sun setting on mountains above camp

Door of the day – on a suspension bridge over Santa River