We had a very quiet night sleeping by the river with only one car coming down either side of the canyon, sometime around 12:45.  I would hate to drive that road in the daylight.  In the night, with no guardrails, no reflective dots and no reflective posts, well, it would be absolutely crazy.  So, one car is just about one more than one would have expected.

We knew that we had the switchback climb this morning so no one was in a big hurry to get going.  We had a nice leisurely brekkie watching the sun rise and lingering over our coffee.  Tents were dry without any dew – this part of the Andes is pretty dry and it will get drier in the coming days. 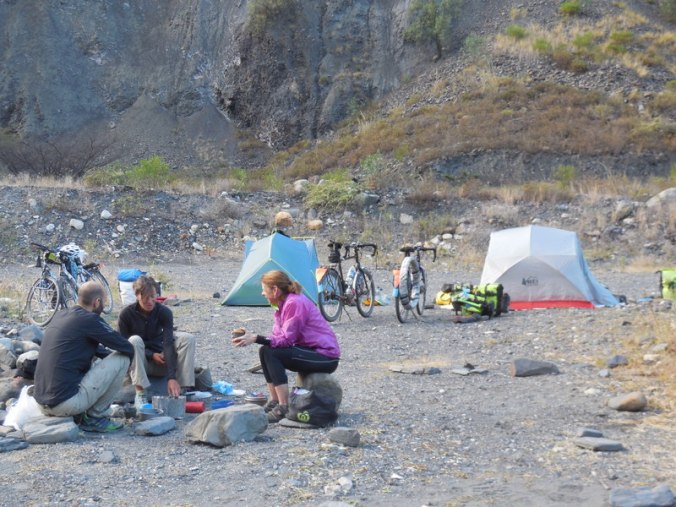 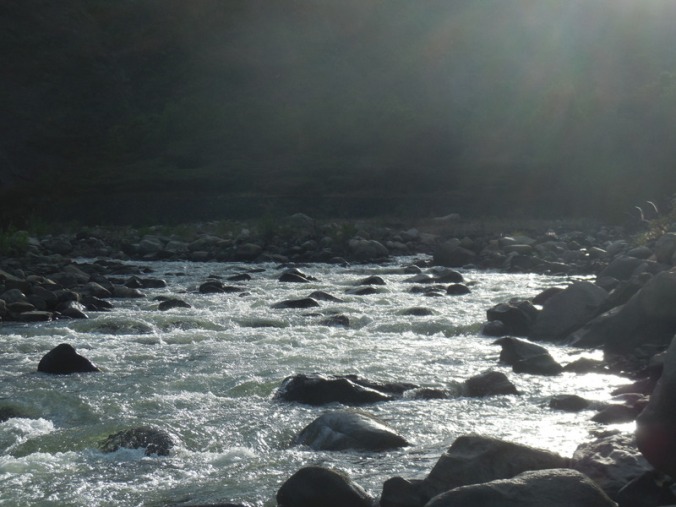 We were just about to leave camp when we heard someone yelling from the first switchback above our camp.  It was Andy, the other German that we’d last seen a couple days ago.  He stayed last night in Mollepata having taken an even more torturous route to get there than the rest of us did (he is a bikepacker, after all).  He waited for us on the corner where we caught up on what we each had been doing.

The uphill switchbacks were paved just like the downhill ones last night, making most of the climb rideable.  And in fact, it was almost a pleasant climb with blue skies and mild temperatures.  We made the top of the last switchback in a little over 1:15 hours and started a massive traverse across the side hill that even had some downhill bits. 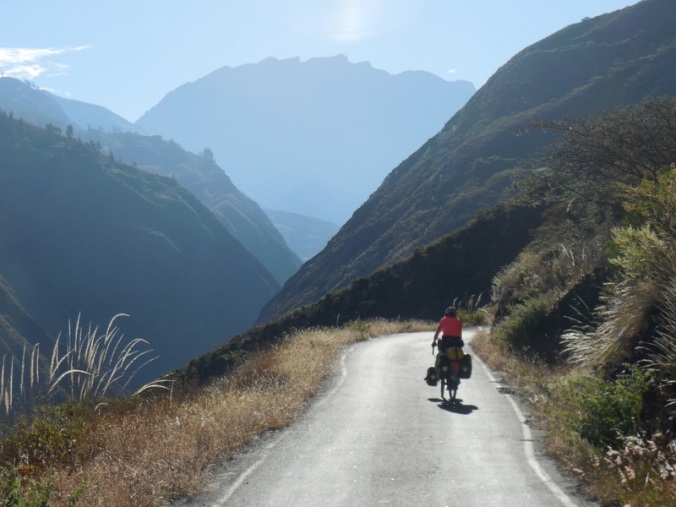 Nancy going up – can you imagine driving that road at night?

Part of our climb 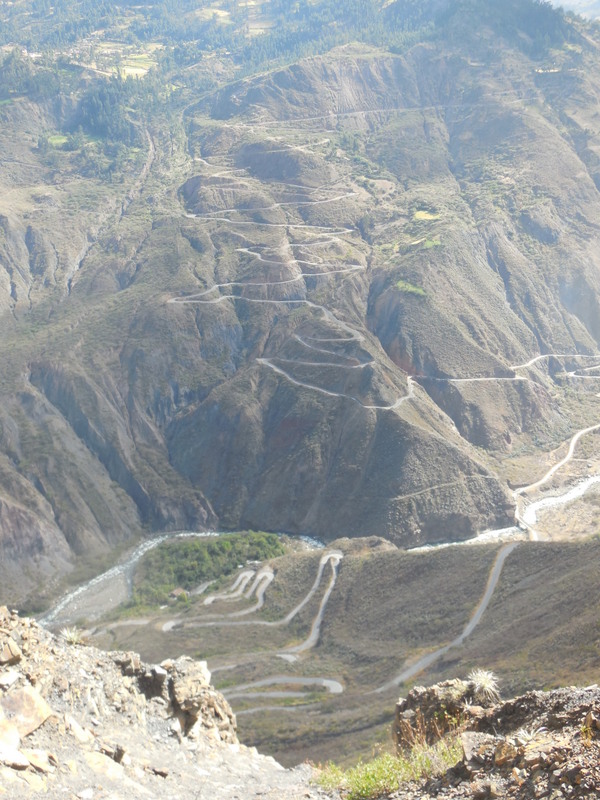 There were some more steep bits and more switchbacks leading into the town of Pallasca but we managed to complete the full climb in a little over 3 hours.  Nancy and I were thinking of calling it a day here but a nice lunch, good weather and riding with the young Germans inspired us to move on.  It was supposed to be downhill to the next river camp – making the remaining 50k all dependent on the state of the road.

Pollasca views with reminder to be safe 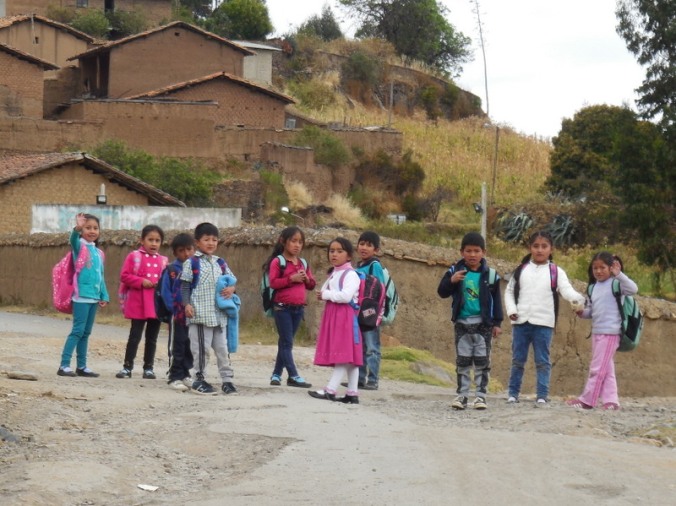 The top of the decent was very steep and rocky.  We’d been warned that it was not rideable on tires less than 2 inches.  We have 1.75 inch tires, Philipp and Kathrin have smaller and Andy has wider.  The first 5-6k were pretty rough – the road had been paved but there were so many landslides that it wasn’t really paved any longer.  And the surface was full of many rocks that really kept us focused on staying upright.  We all made it safely.

After the initial bad parts, the pavement returned and the decent was more or less smooth, though with lots of potholes to dodge.  It was still very steep in spots and there were many sharp turns where we had to be extra cautious.  It’s funny, the massive climb out of the river to Pallasca and now this descent back down to the river all involved the same river – the Tablachaca River.  For my money, a nice meandering riverside road would have been just fine – but I guess that’s just not possible.  As we descended, the temperature rose – by the bottom it was getting pretty hot and there were very few clouds to cools us. 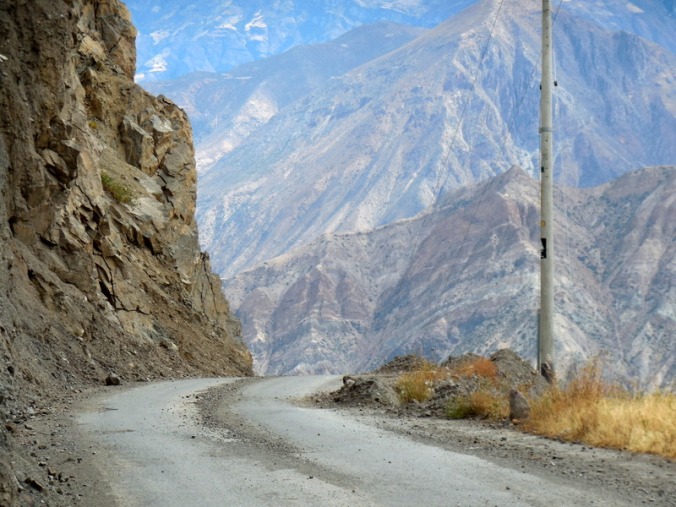 On the way down

Gang on the decent

This “island” was formed by a landslide many years ago, it’s 15 feet high and all that remains of the landslide after the river did it’s thing

We would have had to set-up camp in the heat had Kathrin not been as considerate as she was.  Just as we reached the bottom, after all the really dangerous parts of the decent were finished, she slipped on some sand and came off her bike.  Nancy was just in front of her and called out to the rest of us who were a little further ahead.  We stopped, Philipp ran back to help Kathrin while I got the bikes out of the road as we’d seen two buses coming from down the hill behind us.  Kathrin and her bike were fine, a few scratches and a little bit of a shock but Philipp is a former EMT and had all the right first aid bits.  Philipp got Kathrin patched up, we spent some time in the shade at the side of the road so Kathrin could recover a bit from the shock of the fall.

It was a good reminder to all of us to keep a keen focus on being safe.  We were are really out in the middle of nowhere where 1 to 2 cars per hour pass and help is a long way off.  Calling 000 or 911 or anything else is an option (actually, maybe not as there is no mobile signal there) but you really do have to be able to help yourself first and foremost.

Tablachaca River – our road is the straight line on the hill

Best we could tell, this bridge goes nowhere – the road on the other side was washed out – not sure who paid for it…

The canyon we descended back into was gorgeous and it got better in the late afternoon light.  We rode slowly to camp, taking lots of photos and keeping an eye on Kathrin – she bravely got back on her bike and continued to camp.  We had two sites picked out, and chose the first one because it was getting late and we wanted to get the tents up today before the sun went down.  That project done, everyone jumped in the river to clean some grime off before another nice riverside dinner.  We were all in our tents by 7:45 – it was another tiring and eventful day.