The town of Celendín is home to roughly 25,000 people.  It would appear that about 25% of them regularly wear traditional straw hats that the town is famous for.  The hats are made locally, woven from toquilla straw, the same that is used in Ecuador to make “Panama hats”.  Some of the hats are very tall, some not so much.  From the looks of the hats we saw today, once you get a hat (assuming that your head has stopped growing), that is your hat for life.  Look closely and you’ll see that these hats have put on the years, much like many of the folks wearing them. 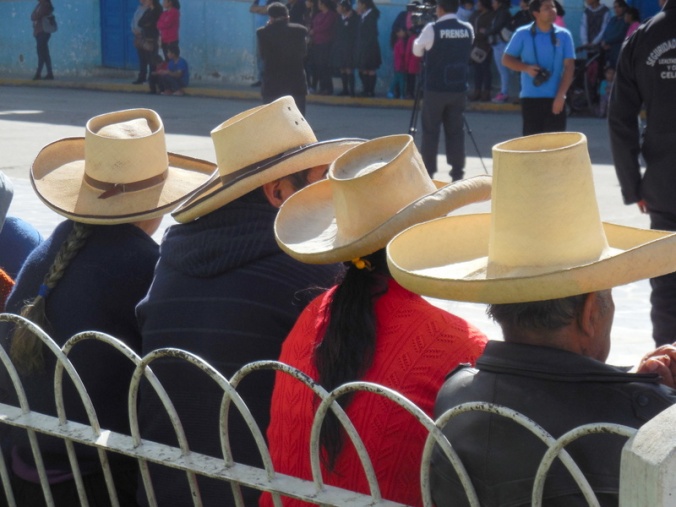 Fellow on the right, with the biggest hat 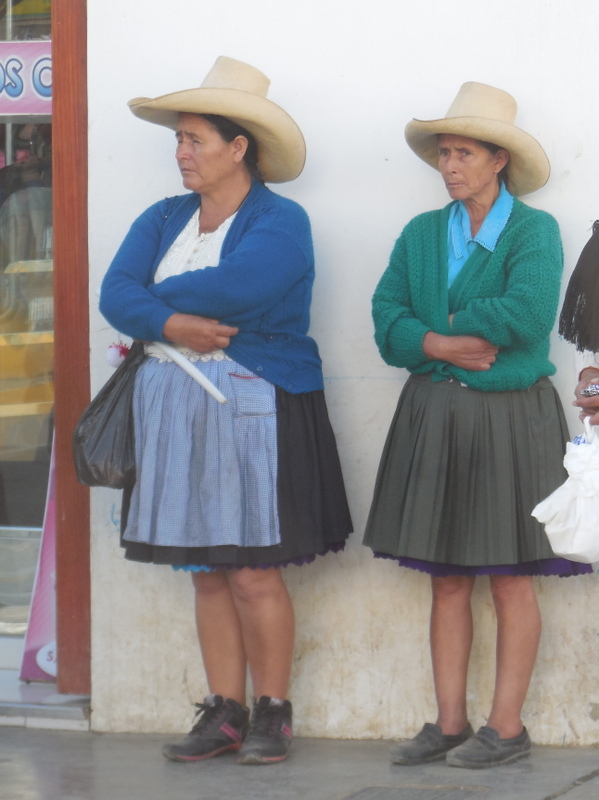 The ladies out for shopping

The hats are so famous here that they have actually constructed a giant sombrero on the edge of town.  I wanted to visit it today but Nancy said that we’d see it on the way out of town tomorrow.  Ok, but that means I get to stop for photos!

You don’t get the feeling that the hats are ceremonial; they look like everyday wear as much as anything.  I say this because we happened to stumble onto a festival here in Celendín today.  The month of July is festival month, the festival of Virgen del Carmen.  They say that the end of the month is the best time for events but today we were treated to a parade of some sorts.

When we arrived at the main square looking for somewhere to have brekkie, it was ringed by various local schools and social organisations in their best uniforms.  A priest and some local leaders made super long speeches while the kids fidgeted and we ate brekkie in a square side cafe.  Eventually everyone was allowed to march to one end of the square, re-gather and then march all of one block past the administrative building to the music of the local brass band.  I’m not sure that we got the whole gist of it but it was fun to watch all the same. 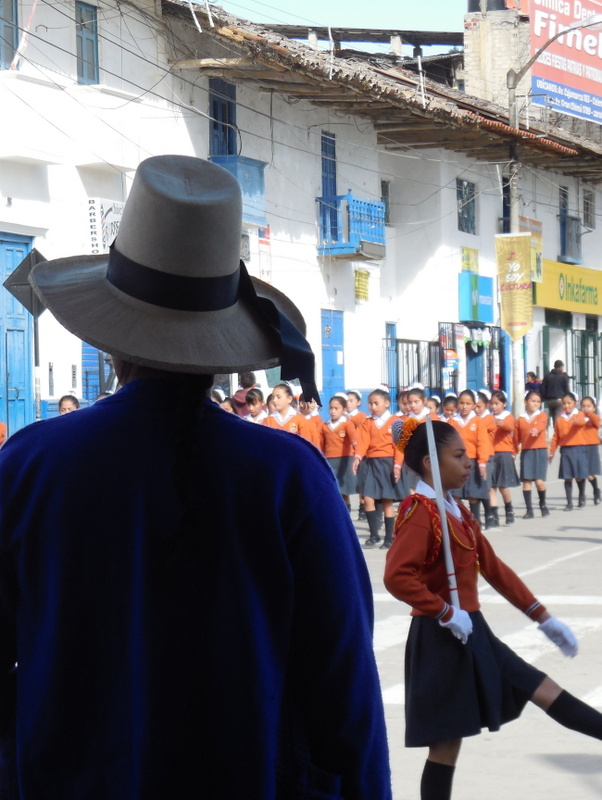 Can we cut this speech short please?

Dog is not related to this school, but it is still showing respect

Aside from the parade, we made a couple trips to the local market.  We found almost everything we need for the days ahead (new rubber gloves – check, bread – check, milk – check, purple corn – check, bananas – check)  No wait, who put purple corn on our list?

Fruit about to be juice – delicious!

Anyway, the market was fun.  I went back this afternoon to get granola and had no luck whatsoever.  I managed to find brekkie cereals but nothing but the sugar coated variety.  I’m not sure if granola is unknown or if my accent throws people off.  It would take several attempts to get then to understand what I was looking for, even when I explained that it was for brekkie and eaten with milk.  When I eventually got shop workers to comprehend my request, they always responded “no hay” – there isn’t any – and they pointed to some other corner of the market.  Eventually I tired of the game, “go to the other end of the market” and returned to the room.

We had a potato street food thing today, with dried beef and corn on top – it was so good

Nancy has been planning our next phase of the route most of the day.  She is really a lot better at planning than I am.  I say “it will work out” and she says “and you want us to just ride off into the wilderness without a plan, geez Dave, we’ll die” (Senior editor’s note- I never said “we’ll die” but I do think a little planning is in order when you are heading out into the mountains of Peru – it’s the Andes, for God’s sake!).  There’s probably some middle ground in there, we’re not going to die, but having a daily target is nice.

I wasn’t totally useless today however as I used my new rubber gloves to get the bikes cleaned and checking our brakes.  Me, I think that having working brakes as you scream down the side of an Andes mountain is pretty important as well.  I might not know where I am going but at least I know that my brakes will stop be when I get there (Senior Editor’s note – and then you’ll die, as you won’t have any water, food, etc).

Our hotel – our room is on the bottom, left most door

Door of the day – mostly because these three chaps wanted in desperately.  The little one on the right was so nervous he kept hiding behind the middle one.

Tomorrow we head for Cajamarca, a pretty big city for these parts.  We’ll search for granola there and do some more planning (naturally).  We didn’t come down much in altitude to reach Celendín and tomorrow we go up again for the first 45k.  There are some flats in there as well but ultimately we will go higher than we’ve been on bicycles.  And not just 1 meter higher, I think we go as high as 3750 meters.  That’s over 12,300 feet – we are doing well with the altitude – in fact, it doesn’t seem to bother us at all.

Check back tomorrow for exciting photos of the giant sombrero.

5 thoughts on “Celendín – Hats, corn and a festival”