We survived our night in Balsas – thank goodness we had a fan in our room!  It wasn’t the best room we have stayed in, but I don’t think it was the worst.  Dave’s Macgyver efforts with the towel over the open window did the trick to keep the bugs out and some of the light from the hallway.  And with the fan running all night we didn’t really hear much other noise.

Unfortunately I failed to put bug spray on after my cold shower (which felt pretty good in the heat) and ended up with my legs looking like I have chicken pox – the sand flies and mosquitoes are pretty bad down at that elevation (800 meters).  Now it is an exercise in will power not to scratch them – just writing about them is making me itch!

We ate dinner early last night at a funny little place just down from the hospedaje – it wasn’t too bad (at least didn’t make either of us sick) but we were the only customers in there.  One of the other people staying at our hospedaje recommended the place.  Perhaps we were just a bit too early for the neighbourhood – I think people don’t move much around there after mid-morning until it cools down later in the evening.  An early dinner meant we were ready for bed by 8:30, with a plan to be up and ready to roll as soon as it got light.

We were both ready to get up when the alarm went off.  It was actually cooler outside than in our room but it didn’t take much movement to get you sweating.  We rode away from the hospedaje at 6:30, and there were people up and about in the street already also taking advantage of the cooler early morning air.  It was 2k back to the junction where we crossed the bridge and started our climb up the other side of river.  Good thing we got enough water last night, as none of the little tiendas were open yet.

Our last flat road for 45k, the bridge deck out of Balsas

It’s a bit hard to describe the first 45k or so of today’s ride other than to say it was uphill – the whole way.  The first section down near the river was a bit chewed up, but most of the roadway was relatively paved.  It was still the narrow one lane road that we came down yesterday but it seemed to be in better shape – or maybe that was just because we were going slowly up it rather than fast down it.

First light on the mountains as we climbed 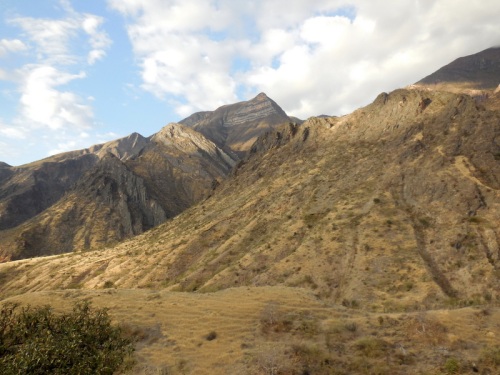 The whole day was basically riding switchbacks up the side of a mountain.  From the bottom you can actually see some of the road cuts way, way, way up at the top – though it’s probably best not to think about having to get all the way up there when you are down at the bottom.  The sun hadn’t quite reached us when we started to climb so the temperature was nice – I can’t imagine how hot it would have been yesterday afternoon.  The whole mountainside is very dry with very few trees – mostly just scrubland and little farm plots. 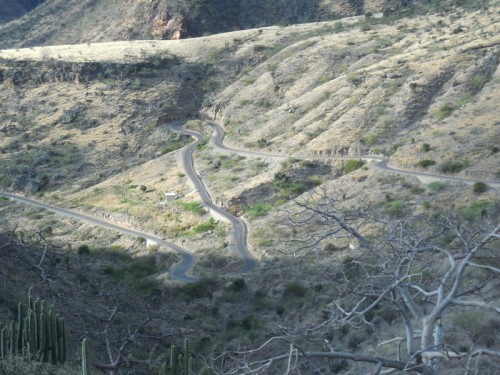 The river and Balsas below.  These pink trees only seemed to be flowering in a narrow altitude range near the bottom.

We stopped a couple times – once to get some more water at a little store/restaurant about 20k up where we had thought about trying to get to yesterday.  With that water refill we figured we had enough water to get us to the top, though there were several places where water was running out of the hillside further up.  We stopped again to eat some of the 6 (!) PB&J sandwiches we were carrying.  Okay, I know probably overkill but you never know when you might need a sandwich to get you to the next switchback!

Those scratch marks on the hillside are our road – yup, not kidding

The scenery was pretty amazing and kept us from monitoring the distance on our bike computers too much.  Just like yesterday, there were huge drop-offs from the roadway (more like laneway) so I certainly didn’t like getting too close to the edge.  We did have a bit more traffic today – we generally stopped to let them squeeze past as I really didn’t want to ride past them very close to the edge.  I don’t think I’d want to be in a vehicle when it met another one coming the other way.  There are almost no guardrails the entire way up – even when the drop off was over 1,000 feet… 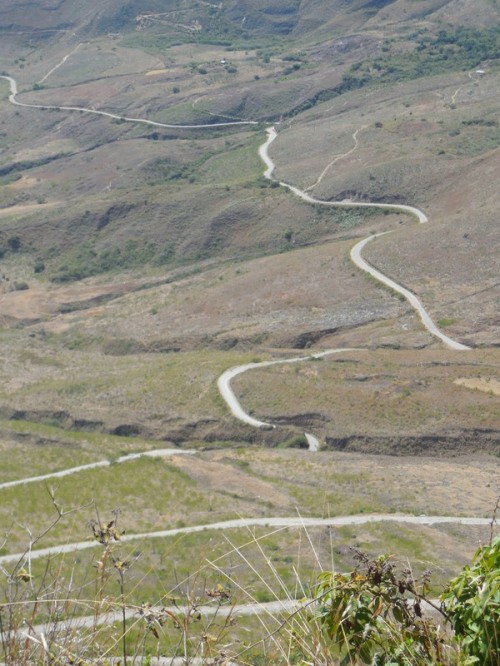 Looking down from the top “scratch mark”

1000 foot vertical drop-off to the right, Nancy getting a little too close to the edge for my liking! 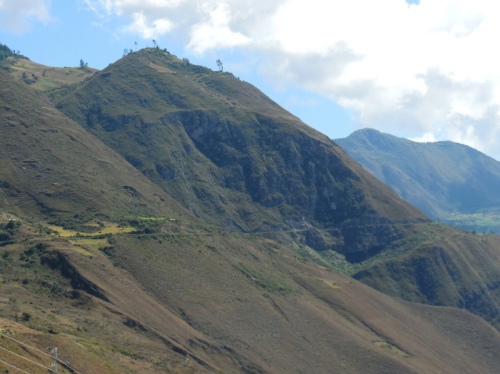 The last 10k of the climb await

At various points we could look back down the hill and actually see the river and Balsas way, way down there.  We could even see it from the very top, once we finally got there.  Nothing like riding for almost 7 hours and still being able to see where you started!  Yes, that’s right – it took us close to 7 hours of climbing to reach the top.  I am not sure I have ever climbed that long before, even on an unencumbered road bike.  Thankfully it wasn’t steep – mostly about 5% grade – but it just went on and on.  The temperatures fluctuated during the climb – I think it was about 23C when we started down in Balsas and it worked its way up to almost 39C for the middle part of the climb and then started dropping down to about 25C as we got toward the top.  It didn’t really matter, I sweated buckets the whole way up.

If you look close, the river where we started it in the middle, upper left – 7 hours to get here!

Dave stopped and took lots of photos – with the views it was pretty hard to resist stopping frequently to try to capture the feeling of riding up the side of a mountain like that.  By the time we hit the last 10k we were both getting pretty tired (and thinking again, what the heck can I get rid of out of my bags…).  We could see the roadway above us, with long sections that seemed to go way across the side of the mountain and then go back the other way.

And then finally, after what seemed like forever, we came around one last corner and could see blue sky straight in front of us.  We stopped as we came over the peak to take in the view of Celendín, about 12k downhill from us.  We ate another PB&J and drank some more water sitting in the sun and admiring the view, thankful that we had no more to climb, at least today.

Our home for the night – Celendin

A quick trip down to town and we soon were at the Hotel Loyers, a kind of funky old hotel with rooms set around an interior courtyard.  We immediately sat down to eat some ice cream, even before taking a shower.  I wasn’t sure I could get Dave out of the chair in the courtyard after he settled in.  The place seems decent – we have hot water, a toilet seat, what appears to be a comfy bed, and wi-fi, all for 40 soles (or $12), so we are feeling good at this point (well, good in the spiritual sense, the body doesn’t feel so good).  We even managed to get our clothes washed and dried at a lavanderia down the road already and have a couple of juices and an egg sandwich for dinner so I doubt will be up too late tonight.

We are taking a day off here tomorrow to recuperate and get ready for the next day of riding – which includes another 48k climb on the way to Cajamarca.  The views so far in Peru have been stunning but they certainly do require some effort… 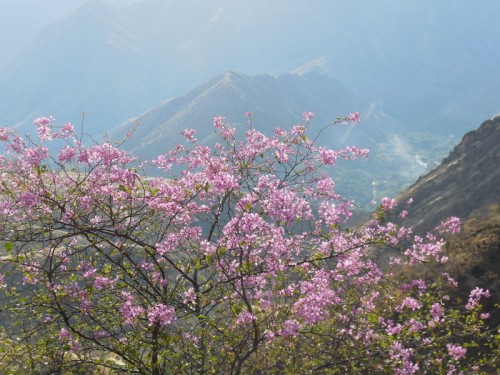 This entry was posted in Americas trip, Peru. Bookmark the permalink.