Yesterday we spent most of the day in Ecuador but being so close to the border, it still felt like Colombia.  Today we got our first real taste of Ecuador, and so far we like it.  We’ve noticed a few things that are different – here’s some quick observations:

Cultivation – the valley where we stayed last night was a lot drier than we’ve been seeing but they sure take advantage of being near the Andes.  There were lots of irrigation ditches moving water around and for the first time that we can remember, we saw ornamental plants with some very colourful fields of bougainvillea starters being a highlight.  Up until now in the Andes, most of what we’ve seen was about growing food or coffee.

Volcanos – There are still a lot of the massive rolling mountains that we saw in Colombia but certainly in this part of Ecuador, there are also a lot more volcanos.  We had a couple poking in and out of the clouds for most of the morning.  And then in both the first big town we passed through (Ibarra) and in Otavalo where we are currently, the towns are ringed by volcano-looking mountains.  Of course the volcanos all disappeared around 11AM with the typical afternoon clouds.  If you want photos of mountains, you have to get up early. 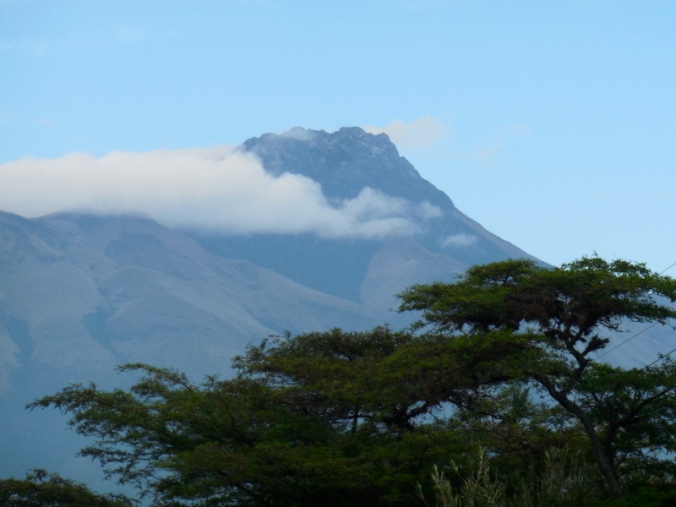 We looked at this one all morning

Same as the first one with more farmland

Tolls – In Columbia motorcycles and bicycles were free on the tollways.  In Ecuador, only bicycles are free.  Having so many folks on motorcycles in Colombia meant that there was a very obvious route constructed to get past the toll booths.  Here in Ecuador, with only bicycles being free, the path around the booths so far has been an interesting combination of handicapped ramps, bike paths with 90 degree turns and the odd driveway.  So far we’ve been able to work out where to go but it is a lot slower and less efficient that Colombia.

Hard right, hard left, behind the tool shed and around the workshop, can’t miss it

Traditional dress – We didn’t see much traditional dress in Colombia unless it was someone busking for photos or the odd llama in costume.  It was all very much clothing chasing the tourist dollar.  In Ecuador, we’ve seen many people wearing traditional clothing, both young and old, and male and female.  For the people here, it is clearly not something you wear to help pry dollars from tourist or even a “costume”, it is simply “clothes”.  We’ll try getting some better and more detailed photos tomorrow – there is definitely a style here that is worth further study. 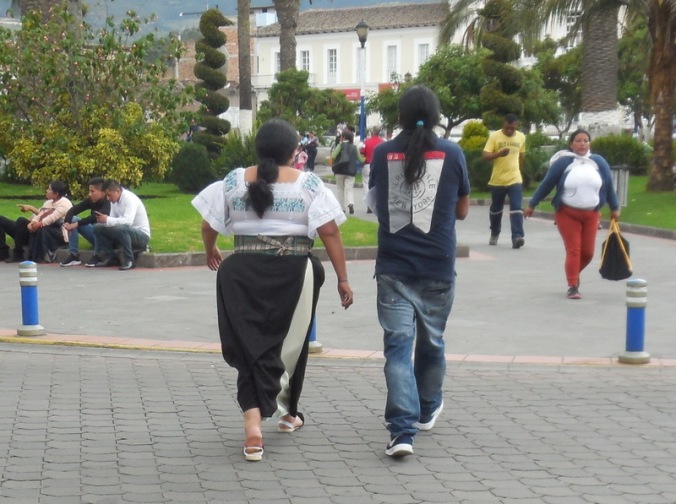 More women than men – as shown in this couple 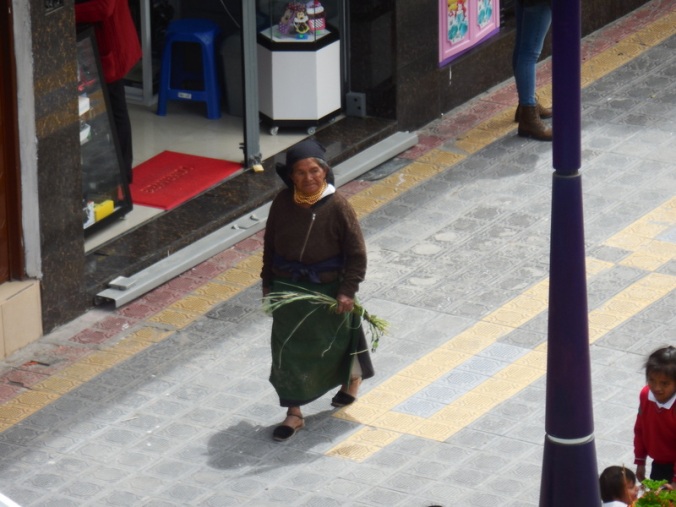 Forgot the onions and had to walk back to the market

As for today’s ride, as per normal we were up again too early for the hospedaje’s brekkie so we ate in our cabana.  When we exited to get the bikes packed, there was some fog around but we could also see blue skies above us, crystal clear bright blue.  We knew that we were in for a good day.  By the time we got a few K down the road most of the fog had burned off and we got a lot of blue – nice.

Our road on the hardest part of the climb

The hard part had three big switchbacks – this is looking down at our road, twice

We had a fair amount of climbing today, slightly more than yesterday.  But it’s funny that we don’t mind climbing when we know its coming.  Yesterday we had mentally geared ourselves for “mostly downhill” (Senior Editor’s note – because that’s what you said it was going to be yesterday…) but today we were geared for “mostly uphill”.  Even though we had a few sections of grunting, the gradients and our positive mindset made it all much more manageable today.

We had a couple stops today at PetroEcuador petrol stations.  PetroEcuador seems to be the “national brand” for servos here.  There have been quite a few of them.  Not all, but many, have an attached restaurant and/or mini-mart.  I’m sure that we will make many stops at them in fhe coming weeks.  Of course, they all have banos so they are obvious target for me!

We reached our destination, Otavalo, right about noon and quickly found our hostel/hostal, The Flying Donkey.  Some other cycle-touring friends ahead of us stayed here and we had to have a look if for no other reason than it has a great name.  The folks running the place are super nice and they had a nice room up on the second floor so we decided to stay.  We’ll be here for two nights.  Otavalo has a few things to have a look at, plus we are managing our time before we meet Nancy’s sisters in Quito.  We have to be in Quito by Friday and it’s only about 95k from here.  We’ll spend a week there with the gals, resting and being “normal” tourists.  We may also stay a second week for some more immersion Spanish. 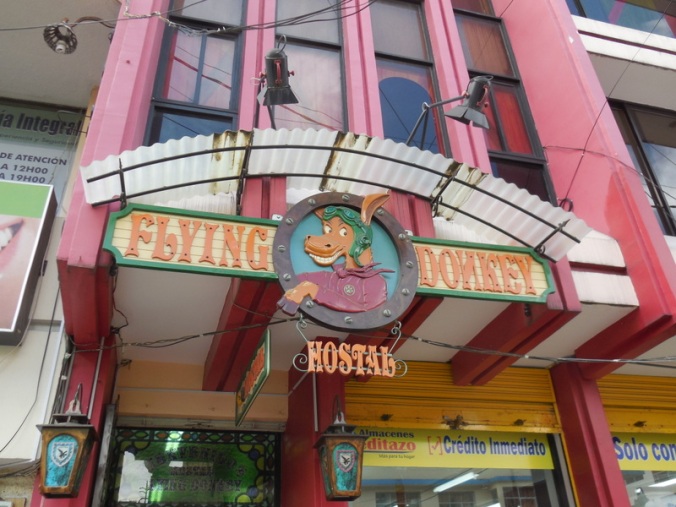 Back to today… After getting cleaned up we headed out to have a look at town.  We are staying right near one of the main squares.  We found a nice coffee shop and had our first proper Ecuadorian cortado.  We’ll be back there tomorrow for sure.

Seen at the square – this couple was driving this 1961 Fiat 1100 all over South America, they are from Arentina

Door of the day, including a mother going over homework with her daughter

We saw a lot of these today – near Chinese Restaurants – we think Chifa mean Chinese food, but it doesn’t translate as anything

We had a fun time people watching as well.  Probably about 1 in 10 of the folks are wearing traditional dress, just enough to make it entertaining for us to hang out and watch – not that we needed an excuse to linger over our coffees.  We have a couple options now for dinner but we may have to take a raincheck (literally).  Those clouds hanging around the volcanos just moved in and it is bucketing down rain outside.  It’s fun to look at from our hostal window – we are glad to not be riding in it (dare I mention that we’ve had dry feet now 6 days in a row of riding – whoops – hope that doesn’t mess things up for Thursday when we leave here).

More tomorrow on what Otavalo has to offer – but so far, Ecuador gets a thumbs up from us…