Our first images this morning in Asunción Nochixtlán were of burned-out cars and a burned-out bus.  Nochixtlan was the scene of violent protest in June 2016.  Local teachers were not happy with changes to national teaching programs and blockaded the road into town.  They held their ground for weeks and a standoff ensued.  At some point shots were fired and 7 teacher protesters were killed.  Police said that teachers fired first.  Teachers said that police fired first.  Outside trouble makers were blamed.  The truth is elusive.  One thing is certain, seven teachers didn’t go home the night things came to a head.

While the violence occurred 19 months ago, the burned out vehicles remain in place.  We’ve heard that the federal police are afraid to move them for fear of upsetting people.  What looks like a “locally built” memorial has been erected to the seven victims.  It is hard to know what actually happened just from reading the press – like so many things on this trip, we’ll never get far enough below the surface to understand what happened and why.  I did find an interesting article about the story at if you wish to read more.  http://www.latimes.com/world/mexico-americas/la-fg-mexico-protest-deaths-20160728-snap-htmlstory.html

Monument to the victims and one of the cars

The bus as it sits today – the bus can be seen in the article noted, before it burned.

Back to the ride…

Our hotel, thanks for staying…

We had some rolling hills and some longer climbs in the morning.  This area around Oaxaca is quite scenic and worth spending more time in.  We had a ripper tailwind most of the day.  Sometimes we were not even to the top of hills before the pushing wind had us working up through the gears.  The downhills were high speed coasting joy rides – 40-50 kph without any effort.

We had some traffic however.  At some point trucks were bumper to bumper.  They just went on and on, courtesy of a clever wood worker who set up his shop and number of roadside stands in which to sell his creations.  See below… 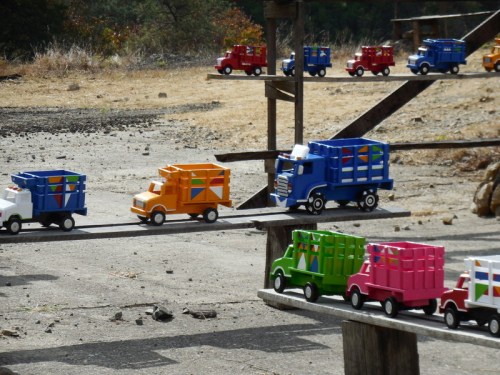 We only stopped once, at a toll booth.  Today, rather than dodging the toll collectors we had to dodge protesters who’d taken over the booths and who appeared to be collecting money from the vehicles going through.  The guards stood to the side and groups of volunteers mobbed cars trying to extract donations.  We think it was all sort of sanctioned but we were not 100% certain.  There was a toll-way up north where protesters did this for over a year, costing the government millions.  The guards were a bit too stone-faced for this to be completely innocent.  But then again, we had the burned out cars on our minds and perhaps conspiracy theories were just an extension of the overall mood.  We didn’t make any donations, and where just waved through.  The only photo we captured was of the toll booth guard dog in training.

More downhills than ups followed the break and the wind strengthened.  We just rode with it, arriving in Oaxaca at least an hour early for our check-in.  We killed some time at an Oxxo before making our way to our AirB&B.  We were still early but checking in was no issue. 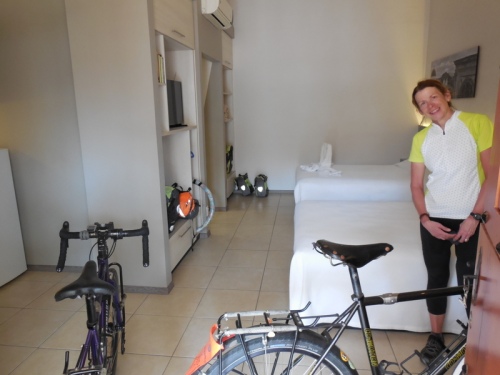 Home for the next four nights

After showers we headed out to find a bike shop.  We’d lined one up to get some repairs done to our bikes – specifically, both of our bottom-brackets needed tightening (or replaced), plus I wanted them to flip our rear sprockets, adjust the brakes and clean the chains.  I could have done all of this myself except the bottom bracket.  Since we had to have the bikes in, might as well let them get everything fixed up.

The trip to the bike shop was funny.  Well, maybe not so funny to Nancy, but funny all the same.  I’d booked into the city centre branch of a local Trek dealer.  Then I promptly guided us 30 minutes on foot to the distant branch.  Talking to a few confused shop guys and a phone call to other shop sort us out but now we had the same trip in reverse.  The branch we wanted was only 5 minutes from our AirB&B.  Going back we rode the bikes, it was downhill but had lots of traffic.  Our 5 minute walk to the bike shop took well over an hour…  Nancy was not impressed.  At least the shop seems good.  They knew exactly what they were doing and spoke great English.  We can pick the bikes up tomorrow night or Saturday.  Mission accomplished, right on schedule!

After all this running around, we needed food.  We didn’t really know where to go but we know that Oaxaca is famous for its food.  We picked a spot that was rated highly – a place called Origen.  The prices were a little high but the food was stunning.  Somewhat small proportions prepared with great care to appearance.  We haven’t had food like this since Sydney.  We might have blown the budget but what the heck, we are calling it our Fairbanks to Oaxaca fancy celebration meal – it was worth it! 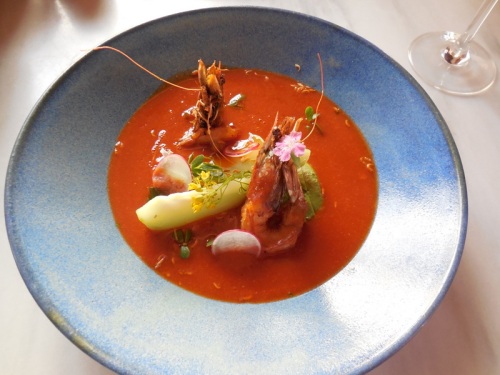 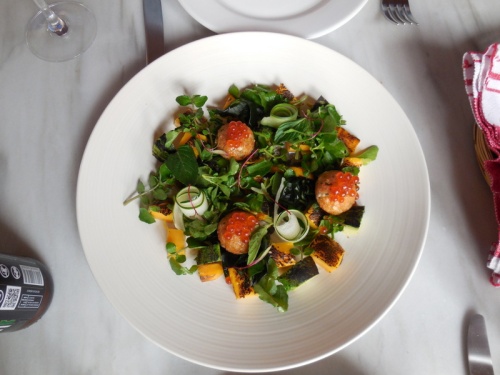 We are here now for 3 days (4 nights).  We have some planning, cleaning, shopping and organizing to do, plus we need to do some of the tourist things – of which there are many.  Best of all, tomorrow, we have no alarm clock.  And maybe, we’ll find another restaurant or two that does that fancy food – we may not see much heading south from here…