Ok, Ok, before anyone gets overly excited with me about being sexist with today’s blog title consider the following.

So, when the fine people of the Mexican highway department decided that road signs leading to our destination tonight should read Nochixtlán rather than Asunción Nochixtlán, well, that was all I needed.  Nochixtlan became “No-Chick-Land”.  I said it a couple of times fast to Mexicans and no one  raised an eyebrow.  And best yet, I can remember the name without having to squint and read my map again.  At least until tomorrow when there is another new name to remember…

Last night we were joined at the hotel by one other car/guest.  So, 2 of the 20 rooms were in use.  Best news of the night was that no one came looking for the toilet seat I borrowed yesterday.  And for the record, no, I did not return the borrowed toilet seat to the room where I found it.  I’m pretty sure that they will never know and besides if they keep renting our room as the room of choice, future guests will be happier and leave better reviews – so really, I added value. 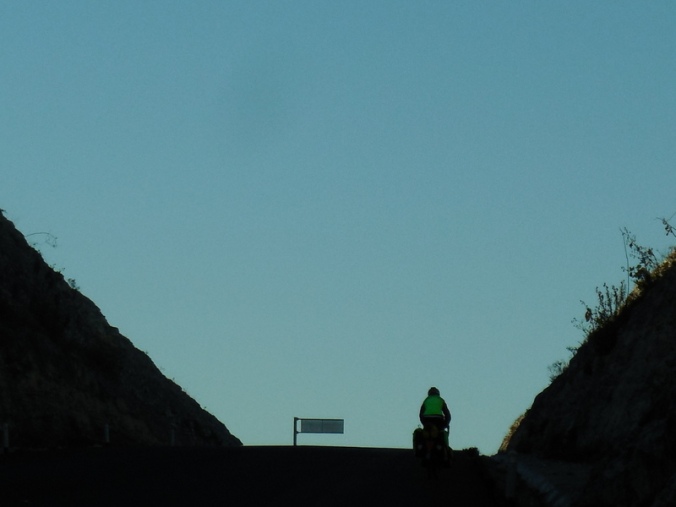 Nancy chasing the sun in the morning…

We kind of scraped together a brekkie this morning – powered milk on our cereal and no coffee again as we knew we had a rest stop at 20k.  Scenery was just as nice as today as it was yesterday.  We had a really big sky with lots of distant mountains, the bit of cultivated land and the occasional hillside town thrown in.  We rode toll-way 135D all day, just as we did yesterday.  This continued to be a great road for us.  It is only one lane going each way but the shoulder is almost as wide as another lane.  Mostly traffic drives in their lane and leaves the shoulder to us.  Sometimes on the hills the trucks drive on the shoulder – but they always pull over long before they get to us.  And generally, there was very little traffic. 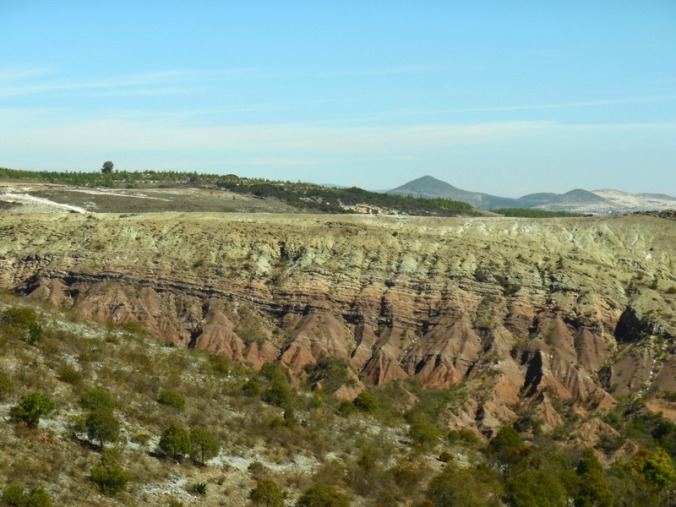 We had our coffee break as planned at 20k.  Nancy had a caffeine (or is that a lack of caffeine) headache so we had to stop.  The coffee was below average and they had no creamer/cream but when in need of caffeine, well, you do what you need to.  Truth be told, I’m a lot happier camper with a bit of coffee as well, even bad Pemex coffee. 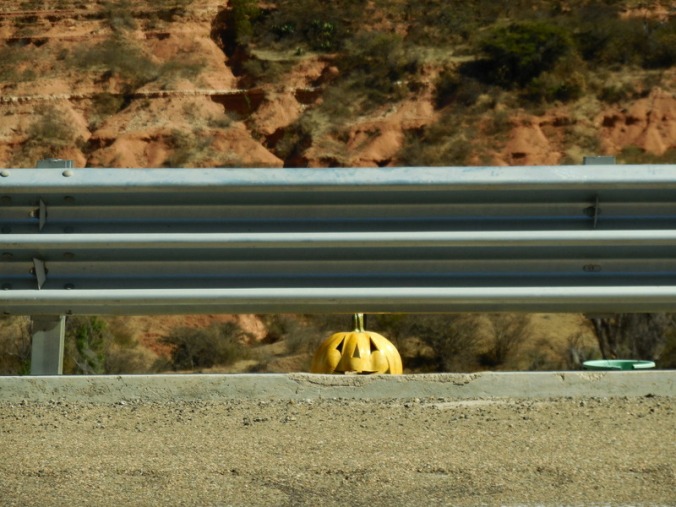 Seen on the road today – yeah, I don’t get it either

Clearly, we have reached a fork in the road

We climbed more or less until about 32k, then had some really nice and long downhills.  We managed to ride into No-Chick-Land at about noon and were in line for an early arrival at the hotel.  That all changed when we spotted a couple of other touring cyclists on the other side of the road.  Meet Denis and Rosie – a nice young couple from Scotland.  They have an amazing story of hopping sailboats from Scotland to the US, buying bikes from an old guy in Oregon and hitting the road only 3 weeks ago in Mexico.

Denis, Rosie and Nancy – rock on you guys – great to meet you!

Sometimes when we meet other cyclists we feel overly organized and planned out.  Our bags are too clean, we wear cycling clothes, we ride in clipless pedals, we know where we are staying the next night and we try really hard to get a shower every night.  Well, meeting Denis and Rosie was one of those meetings.  They were real free spirits.  They rode in street clothes, they wore sandals, their bags didn’t match, their bikes cost $500 total and were from the 1980s.  And even at noon, they didn’t really know what they were doing that night.  If they had a “master plan”, it was as simple as “ride until we run out of money”.

Of course, neither their way or our way is right or wrong.  Deep down we know that our personalities will never let us “ride where the wind takes us” but we’re always a little jealous of people that can live this way.  If your reading this Denis and Rosie, nice meeting you and stay the course.  You inspire us to be more free – so long as I get a shower every night still somehow – haha.

We eventually found our hotel, the Rincon 3 Angeles in No-Chick-Land.  It’s a nice hotel, ground floor room, with no stairs and yes, a shower.  I should say, a warm shower.  No CNN on the TV but there is a TV.

We took a stroll around town and found a cafe that would serve us brekkie for lunch.  I had pancakes and eggs while Nancy didn’t have pancakes.  I think she might have been a little jealous of my pancakes but I still didn’t share – we are both finding it a little hard in Mexico to get enough food.  You can only eat some many beans and rice dishes.  So, when one gets a plate of pancakes they are highly prized (and guarded). (Senior Editor’s note – those long time readers will remember certain occasions when the Senior Editor was expected to share her pancakes with no questions asked.  Seems different expectations apply when the shoe is on the other foot…) 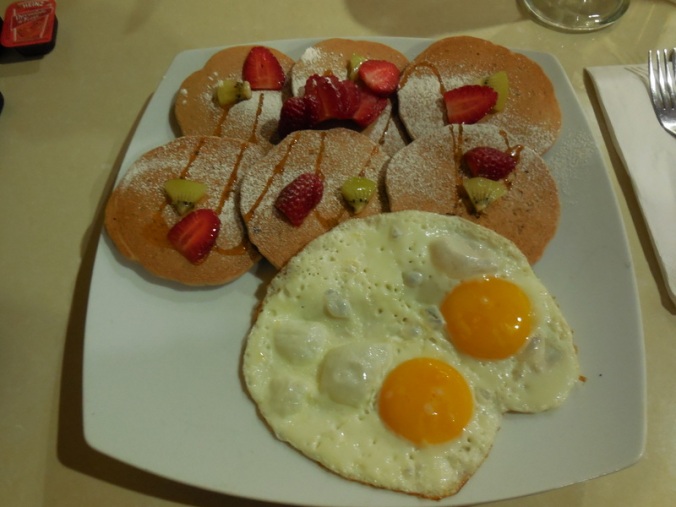 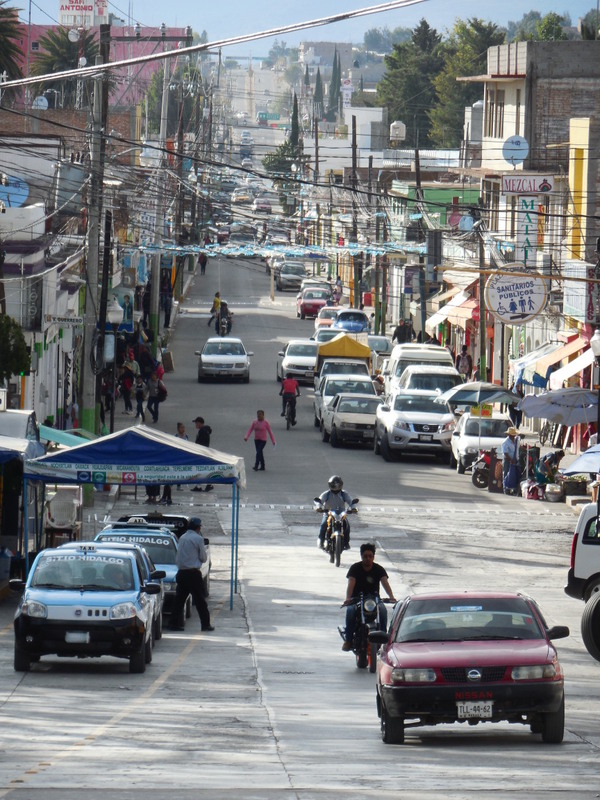 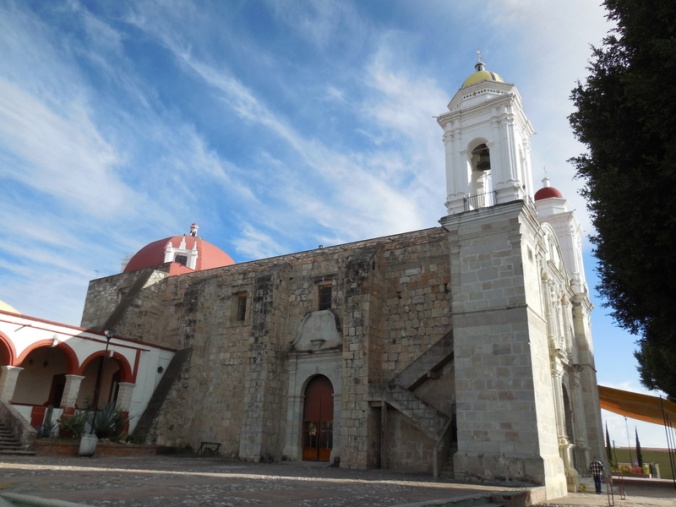 Yup, same here, I have no idea…

Tomorrow we head to Oaxaca – a city that has been our minds since Baja.  We met travellers in Baja that talked of the magical city and it sounded too exotic.  If you are like us, you probably don’t know how to pronounce Oaxaca.  Well, here goes, “Wa-ha-ca”.  I know, I don’t get it either.  The letter X is funny in Spanish – it doesn’t have a consistent way of pronunciation.  In fact, when we heard about Wa-ha-ca, it took one of the other travellers looking at our master plan map for us to connect the place they were talking about and where we were going…  More later on what’s so magical about Oaxaca…