We had a pretty quiet night in the hotel last night – we both slept well – probably tired.  At around 6AM a large group of folks checked out.  We think it was the cycling group that we saw yesterday but we didn’t get up to have a look – the disadvantage of having a ground floor room I suppose.  We never did figure out anymore of the story of the cyclists.  Anyway, it was nice to see Mexicans riding, whatever the reason.

Riding out through the old town area this morning

We had sore legs and a short day planned so we didn’t rush this morning.  Riding through the old town area was quiet with not very many people out and about.  I mapped a route that took us past one of the bigger cathedrals, the Expiatorio Temple of the Sacred Heart of Jesus.  It was very quiet here as well – morning mass was taking place inside but it was not very full.

All this quiet sort of lulled us into thinking our ride might be peaceful – how wrong this turned out to be!  We left the church, turning right onto what would become highway 45.  Highway 45 turned out to be 3 or 4 lanes going both directions and heaps of traffic.  Being on bikes, we were low man on the totem pole – we hung to the right, gave way to everything and gritted our teeth.  Mostly cars gave us some room, but not a full lane.  Taxi drivers were insane, practicing tight manoeuvre driving.  And the local bus drivers were only slightly better.  This semi-controlled chaos lasted almost 40k.

The road between Leon and Silao was basically one big industrial park.  This area is clearly one of the hotbeds of car manufacturing in Mexico.  We passed Toyota, VW, GM and Nissan plants.  Without getting overly political, it is pretty clear that Mexico saves money on plants in more ways than simply paying people less.  The plants seemed to have been built without much consideration for safe roads, clean air standards or the liveability of an area.  There has to be more to life than “jobs creation”.  Give me clean air and safe ways for people to move around, without being stuck in a car any day. 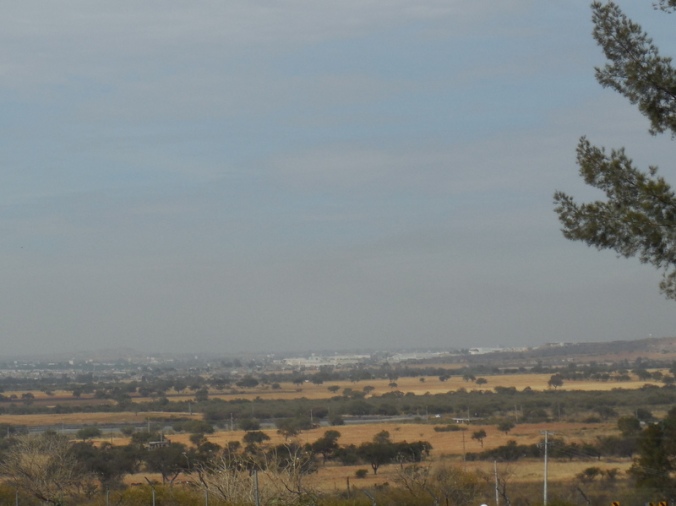 Looking back toward Leon – air quality not great

Anyway, we stopped at around 35k when a Starbucks appeared out of nowhere.  Actually it was the second one we saw but the other one was across 8 lanes of traffic and not accessible.  Nerves a bit rattled, we stopped off for an espresso and a chance to get off the road for a few minutes.  In addition to Starbucks, all the big hotel chains have hotels along Highway 45 – you need somewhere for all the executives from the car plants to stay when they visit.  There is also an airport nearby, which helps explain all of the chain hotels. 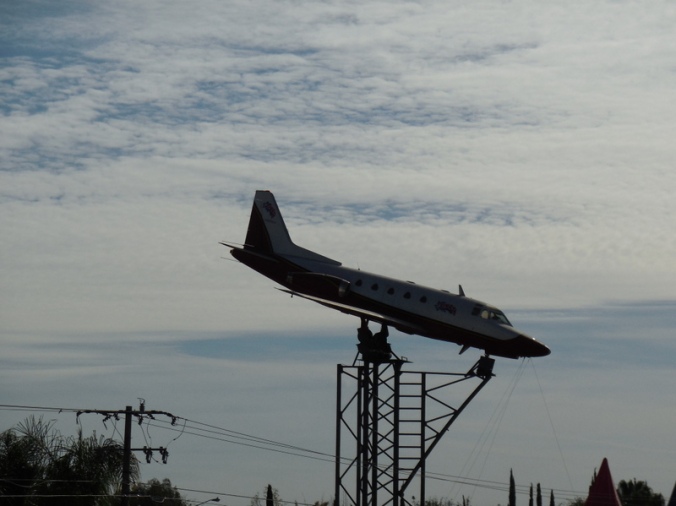 One of those places old executive jets go to rest…

We had about 5k more chaos to ride once we left Starbucks.  Traffic became quite a bit calmer when we turned left onto the toll-way heading towards Guanajuato (Hwy 1100).  We passed at least a half dozen “no bicycle” signs but we just ignored them.  We also saw lots of ‘No Pedestrians’) signs.  We passed one chap on a bicycle and saw a guy out running along the highway.  And we were overtaken by a good number of highway patrol cars.  It’s pretty clear that the “no cycling” thing is just a concept, not a rule or law.

The toll-way was great – wide shoulder and two lanes of not much traffic.  It was uphill but not too bad of a climb.  Off to the side several times, we could see the road that Google maps wanted us to ride from Silao to Guanajuato – it was narrow, without any shoulder.  And it had heaps of traffic, locals not wanting to pay the toll.  Boy was I glad we ignored the signs.  At the end of the toll-way, we simply rode around the toll booth on the sidewalk again – no one gave us a second look – hmmm. 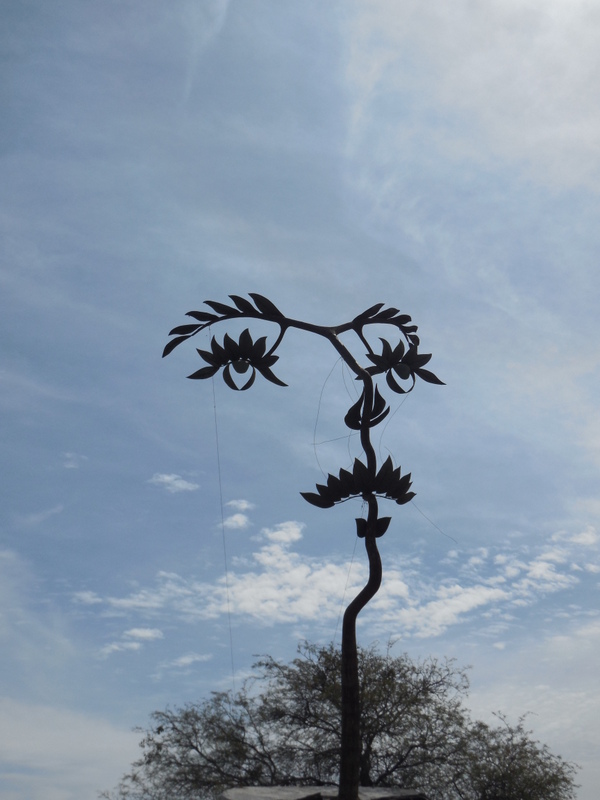 Art on the freeway coming into Guanajuato

Surprising highway sign in a strong Catholic country – “Contraceptive methods are free. Inform yourself, protect yourself, it’s your future”

We had a really steep hill over Diego Rivera Road to take us into the top of Guanajuato.  The climb was hard but it didn’t last long.  The downhill into the old area of Guanajuato where our AirBnB is located was fun with a tunnel but we knew it was coming and had our lights on.  Traffic stayed behind us and it was very safe.

Guanajuato is a nice looking town.  It’s built in a narrow canyon with houses, buildings and roads going every direction.  It has lots of tunnels and really looks like a nice place to park the bikes for a few days.  Nancy is building our list of things to do here so we’ll save that for the next post.  Our AirBnB is nice.  It’s a great location on the upper part of town.  We are on the ground floor but have access to the rooftop terrace where the views are quite nice.  It’s cooler here with the forecast for rain tomorrow.  We haven’t seen rain for months – we think since Tehachapi, CA in fact.  We are taking three whole days off here – ready for a bit of a break.  Our next post might not be for a few days – unless something exciting happens…

A kitchen for the next couple of days 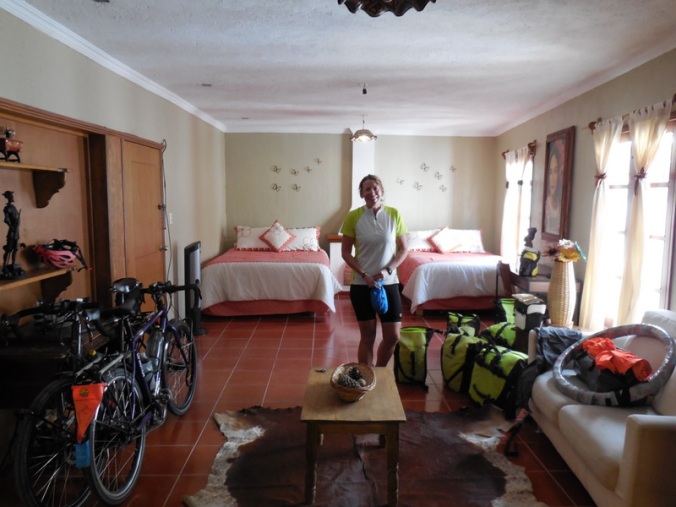 Our home for the next few days

View from the terrace 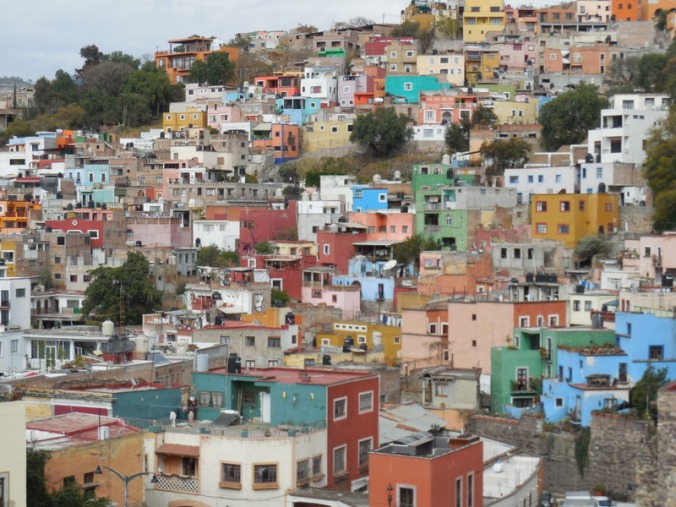 View from the terrace

Cafe Tal – nice coffee shop just down the alleyway from our apartment.