So, we are a week away from leaving La Paz (ack!) after a nice two month break to learn Spanish.  It has been a nice break for us, and as hard as it is to learn a language, especially as an ‘older’ person, it has been a lot of fun to exercise our brains in a different way for a little while.

We are in no way fluent, but we have learned enough that we can at least attempt to have conversations with native Spanish speakers.  Well, we could if they would only slow down a little bit to give us a chance!  We generally have to ask people to speak more slowly, which often results in them repeating what they said with no apparent reduction in speed.  Slowly means different things to different people, I think!  It is fun though, when we are able to make a connection in Spanish and get our point across.  Hopefully as we continue on through the Spanish-speaking world we will only get better at it. 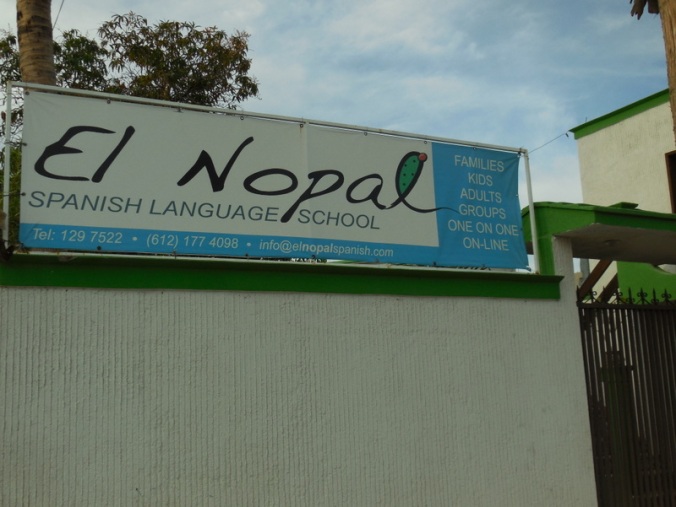 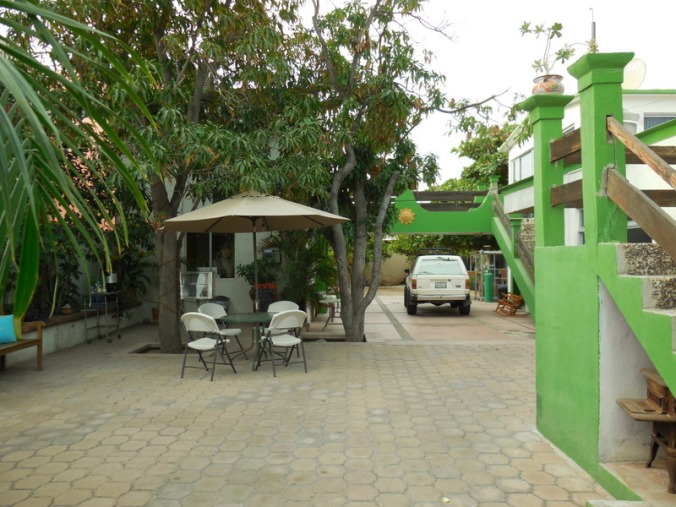 The school we attended in La Paz, El Nopal, was great.  It is a small school run by Marta (who has experience teaching overseas) and Juan.  They offer group classes and private sessions, plus I think they also do classes via Skype.  The school has quite a few teachers and they make an effort to give you different experiences as you learn, including lots of conversation practice.  We enjoyed all of the classes we had but felt lucky to have a young woman named Ahena as our primary teacher.  She is clearly someone who loves to learn and loves to teach and is quite adept at figuring out how others learn.  She tolerated Dave’s bad jokes in Spanish, patiently and politely corrected our pronunciation (over and over) and would be a great person to have on your team in any charades game!  (Junior Editor’s note: “tolerated”, hmmm, I’d have to say it was more akin to “appreciated”, as in appreciated the fact that Dave’s wonderful sense of humour translated so well to a new language) 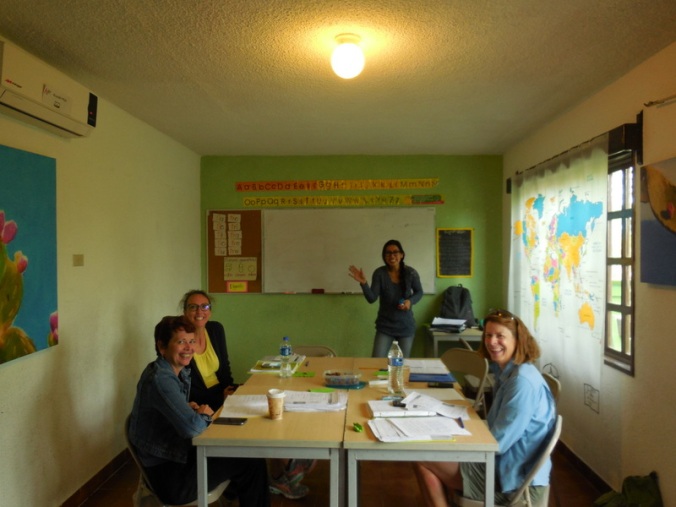 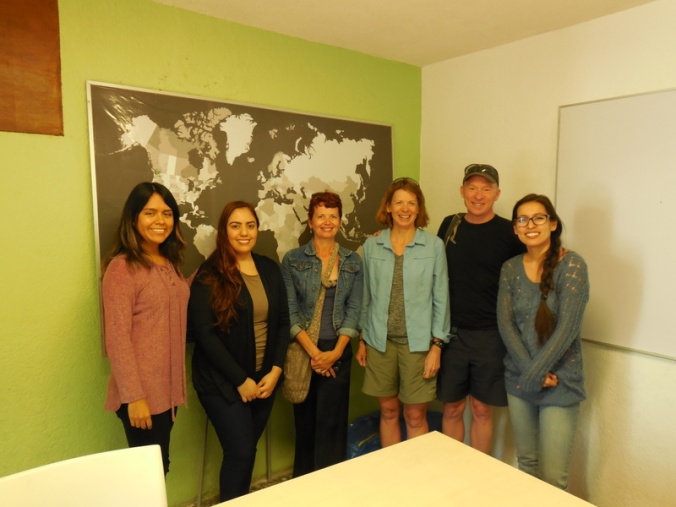 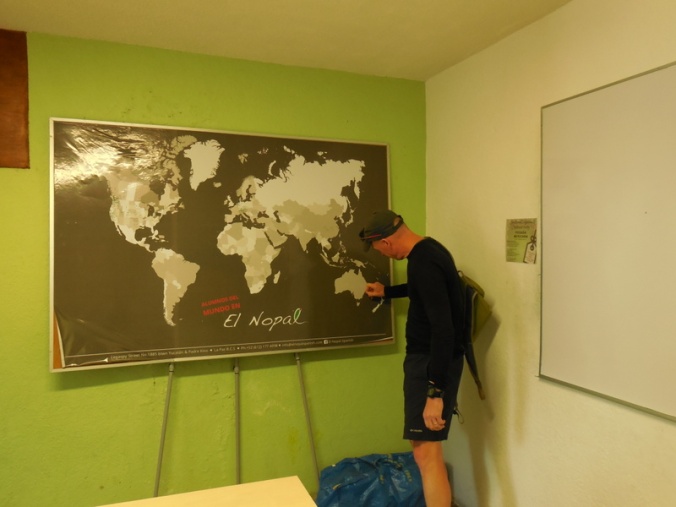 The school has classes for kids as well as adults, and it was quite fun to try to interact with the kids in Spanish during break between classes.  There was a very little fellow about 2 years old, Jose, who was there in the morning with his mom while she cleaned the courtyard and classrooms.  He was very wary of us for the first several weeks, but we finally got him to wave hello to us when we arrived in the mornings.  Ahena’s young daughter was also quite friendly and often spoke to us though she was much more advanced in Spanish than we were!  She said something to us one morning and we tried the usual ‘can you repeat please’ (in Spanish) and she politely repeated ‘please’ (in Spanish).  Obviously she has been taught manners very well, but it was a very funny moment!  At least it was some consolation that she understood what we said to her. 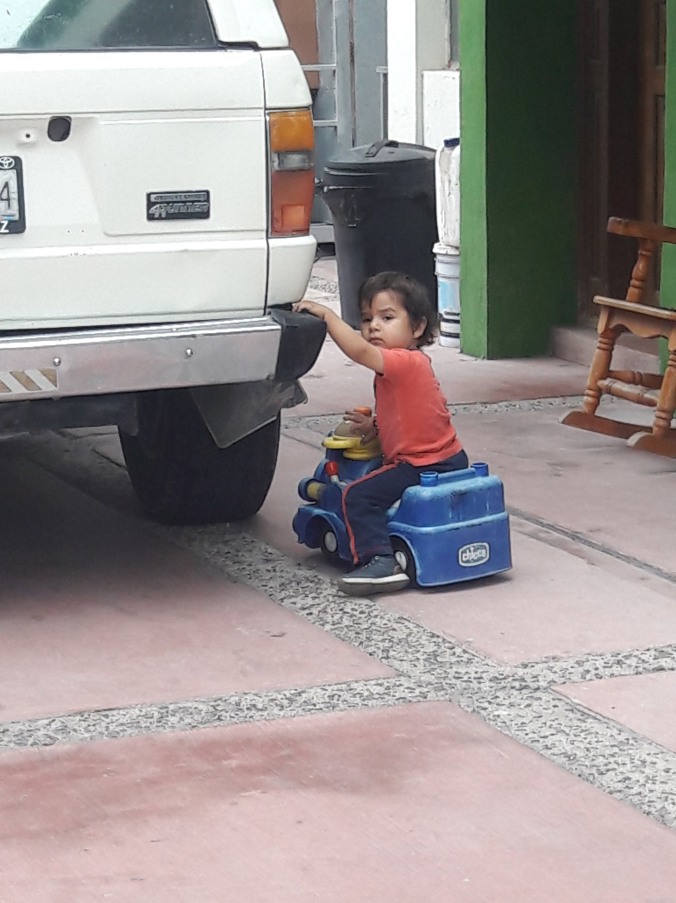 Both Dave and I have taken copious notes during the 7 weeks we were there, and unfortunately there is no room in our panniers for all of that paper.  So, we have spent the last couple of days trying to get it distilled into something manageable that we can take with us.  When we started class I started making flash cards to help us study, but the pile of cards is way more than we can carry.  A few weeks ago I stumbled on a great app called Quizlet, which lets you create online flashcards in whatever form you’d like.  You can also access flashcards created by others if they are made public.  Even better, it’s available to use offline so there shouldn’t be anything to stop you from doing flashcards at any time!  So, if you are learning a language I would really recommend it.  Actually, it looks like people use it for all kinds of subjects, but I think we’ll stick to Spanish for the moment.  We are using some online resources like DuoLingo and Busuu as well, so hopefully we’ll have enough to make sure we are still learning.  Given that there seems to be about 20 different verb tenses and 5 conjugations for each verb we have only touched the surface of the language.

Our last day of class coincided with the Christmas break and most importantly, the Christmas posada.  Posadas are the traditional Christmas party here in Mexico, and the school throws a nice party for all of the students and the staff.  There was lots of tasty food, singing by the kids and the all important piñata whacking!  It was great fun to watch, and there were clearly some kids who had practiced the most effective whacking methods over a few years! 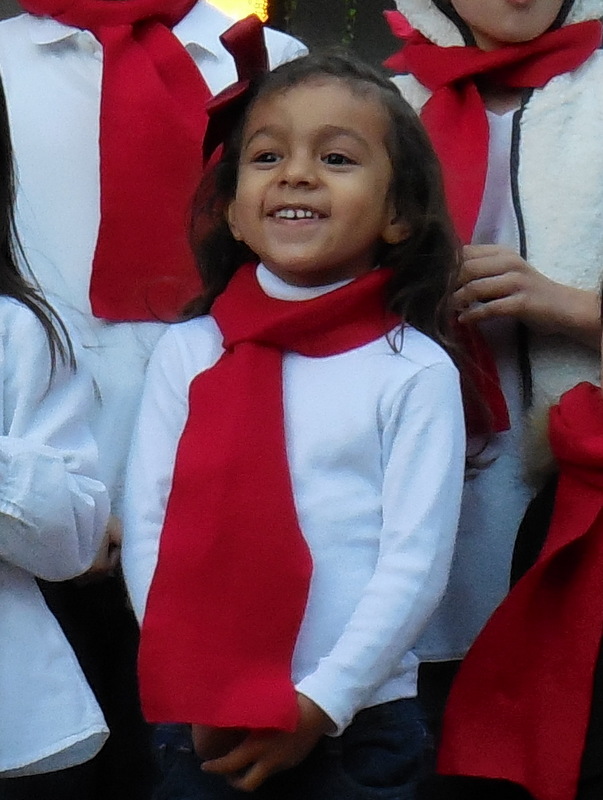 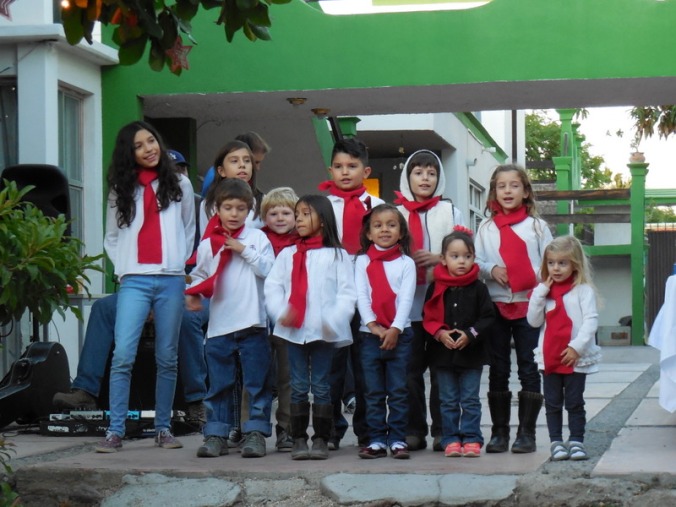 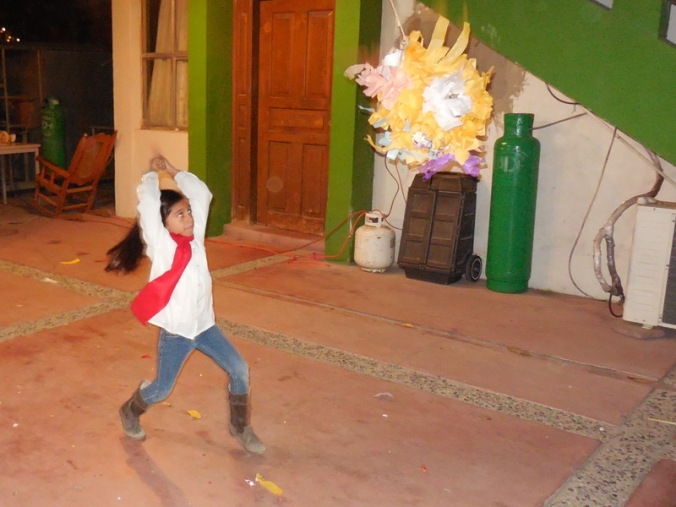 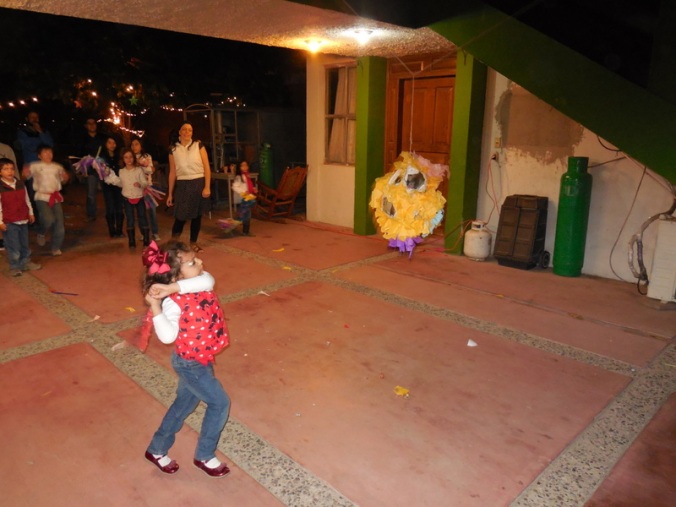 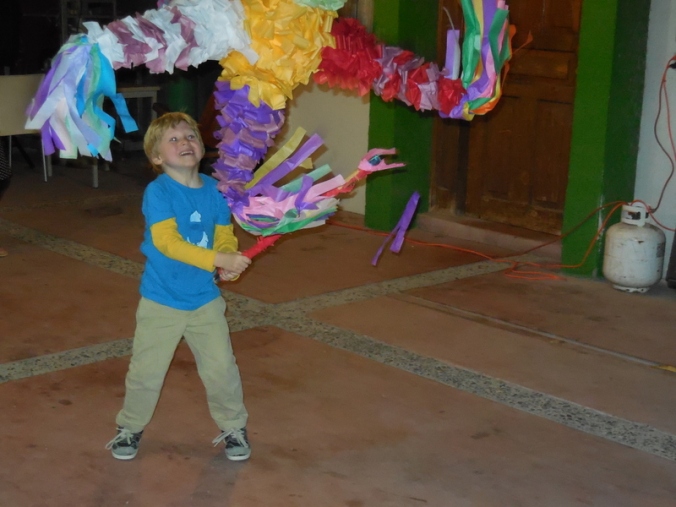 Early shot, before the arms were all whacked off 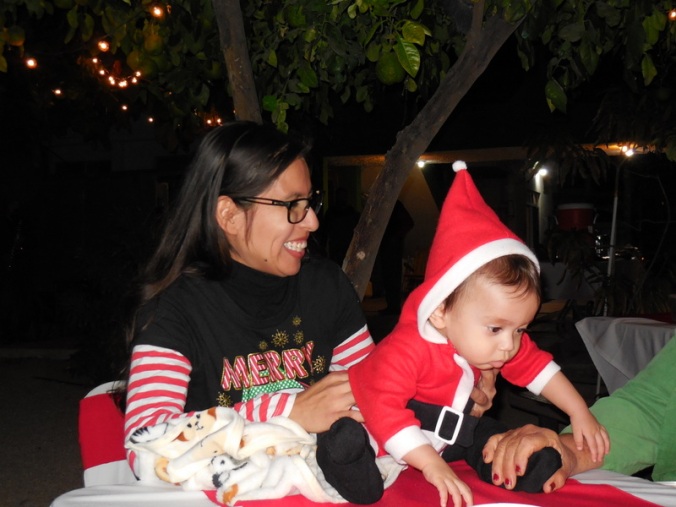 Ahena and her young son 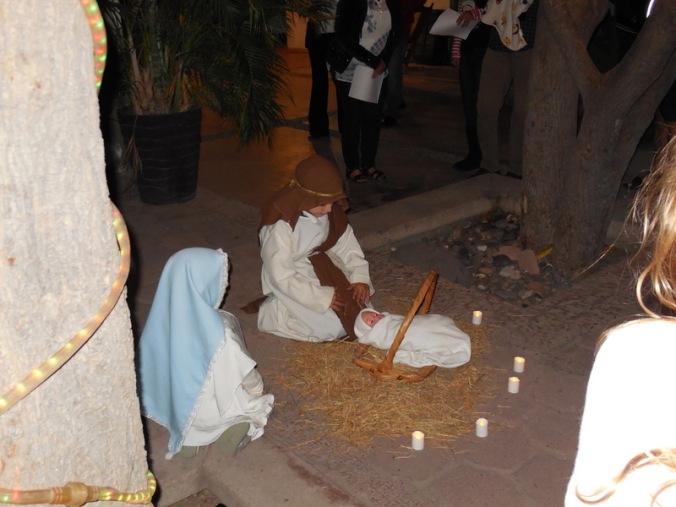 If you are interested in studying Spanish here’s a link to the school’s website http://www.elnopalspanish.com/ – we give it top marks.

So, we are now starting to look at repacking our bags and getting ready to get back on the bike.  I am sure it will be a shock to the system (again) after being off the bikes for a bit, though we were riding back and forth to school every day.  Oh well, it will give us something to focus on as we head across to the mainland (or the ‘interior de la Republica’, as they call it here).