Today was a better day.  We only had one dusty, ride through town section – in San Vincente.  The roads were quieter – being Sunday and further from Ensenada.  In this part of Highway 1, the shoulders are fairly predictable.  When the route goes through or over a mountain, and it’s too narrow for a wide road, the shoulder disappears.

This is a little tricky for us as if often means a climb and a greater speed differentiation between us and the cars.  We can see the cars and trucks, long before they reach us and we have to decide if we get off the road or not.  Today we dove 3 or 4 times – but dive is really an exaggeration.  By being alert and aware, we can make the decision to get off the road well before the overtaking vehicle reaches us.  We got a couple toots of thanks today – share the road.

Last night we decided to cook our own dinner in the room.  Or I should say, outside our room.  We set the camp stove up on our porch and cooked up some food we’ve been carrying since San Diego.  We were the only guests in the hotel so no one complained about the stove noise.  While cooking, I looked on the ground right next to the stove and spotted the smallest scorpion that I’d ever seen.  In one of those “I wish I could stop the words as they are coming out” moments, I called out to Nancy to have a look.  While she thought the mini scorpion was interesting, it also meant that the bug spray came out in our room.  We don’t want any of those pesky mini scorpions making unannounced visits during the night.  We had boil-in-the-bag Indian, with a hint of Deet – very tasty.

This morning we were up early.  We didn’t want to linger with the scorpions and we wanted to get a jump on the long climb right out of the hotel.  We were pedalling by 7:30 which is pretty good for us.  The climb was hard but pretty cool first thing and there was near zero traffic – and as noted above, no shoulder.  We were happy with our start time.  The scenery was nice, lots of distant Baja mountains, with the odd vineyard or crop in the valleys.

Baja mountains in the morning

We reached San Vincente around 9:40 to find a busy Sunday market in full swing.  We normally like markets but this one seemed to be selling more clothes than anything.  There was no sign of fresh Oregon blueberries.  We stopped at the Oxxo for drinks and morning tea – their baked case is pretty good, even if we don’t know what we are eating.  A bit too much sugar but we’re thinking less than Twinkies (we’re thinking). 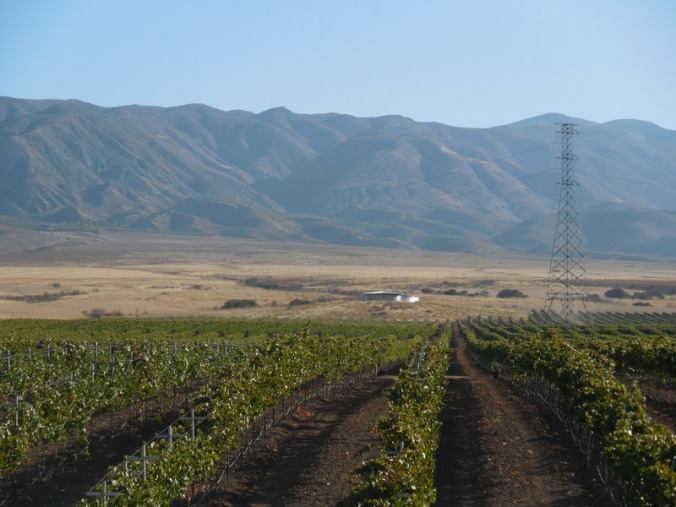 About half way to Punta Colonet we stopped at a Pemex (servo) out in the middle of nowhere.  We had an early lunch trying out their fresh sandwiches – it was pretty good.  While sitting there, we saw Nina and Martin ride past – they did not see us.  Hopping back on the bikes we were greeted by the second, no shoulder, climb of the day.  Traffic was a little busier but we got off the road for a couple big trucks and the rest were no problem. 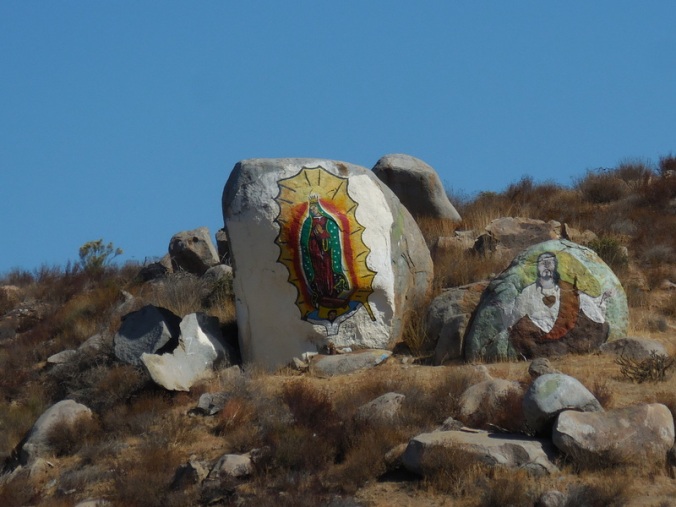 Random saints of the rocks, keeping watch over us

We managed to catch Nina and Martin at the top of the climb.  They stayed in San Vincente last night and were heading for a stop just beyond us today.  We compared notes of last night, as travellers do, and rode onwards to Punta Colonet.

Punta Colonet is a long town and signage is not great so we were not really sure where we were most of the time.  We stopped at yet another Oxxo, got water and checked Google maps.  It looked like the hotel we were aiming for was just past town so we loaded up on water and rode on, reaching the end of town and finding nothing.  Check the maps again.  Hmm, seems to still be ahead of us, up that big hill.  Nothing to do but push on.  Eventually, long beyond town and after we’d almost given up, we spot our stop for the night, the Paraiso Inn out in middle of nowhere.  Our room was a little expensive but the nicest that we’ve had in Mexico so far.  They have a restaurant as well – which is a good thing given that there is nothing else here.  We appear to be the only guests tonight as well.

Interested – its a whole lot of nothing out there…

Spare bike riding off into the sunset

Photo taken sitting on step to our room

Close up of cactus

For anyone interested, there is a potentially tempting RV for sale in the car park.  I’m not sure of the year, but the plates expired in 2011.  We will be moving on without putting in an offer – but someone might be tempted….  The hotel is on a bluff with great distant views out towards the sea.  We don’t think we can see the sea, but it’s out there.  For dinner, we sat by ourselves and had a lovely meal, and lots of attention from the staff.  Interestingly, clouds have started to come in from the direction of the ocean so I don’t think we’ll get the perfect sunset picture.

There may be back taxes due

Love it – can’t even tell which is the front!

Tomorrow we are heading to Vincente Guerrero – we think.  It’s a short ride but pretty soon we need to link up with the “Baja Schedule”.  The Schedule is pretty much what you have to ride in Baja.  Towns and services are located in a way that makes anything different too hard, unless you want to do lots of bush camping.  If we can find a place as nice as tonight, we’ll be more than happy.