We survived Canada Day night in the Campbell River Fishing Village.  The Mounties only had to come the park once and really, it was just a minor domestic disturbance that barely merited wasting the time of Canada’s finest.  The fireworks were somewhat loud and didn’t start until 10:30.  Not that I would have known as I was completely out.  Nancy woke but couldn’t be bothered getting out of the tent for a look.

Several folks have asked about Canada Day.  This was the 150 year but it’s not like many other colonies and their independence.  July 1 is merely the 150 anniversary of the consolidation Nova Scotia, New Brunswick, and Canada into a wider British federation of four provinces (the colony of Canada being divided into the provinces of Ontario and Quebec upon Confederation). Canada became a “kingdom in its own right” within the British Empire named the Dominion of Canada.

So it’s not as if Canada said “we’re independent now” to the French and British – that happened over a series of years and various different agreements.  However they got there, today, July 1 is recognized by most Canadians as their national day – like July 1 in the USA and January 26th in Australia, which is as good excuse as any to get a temporary maple leaf flag tattoo.

A clever person made this from driftwood – Happy Canada Day 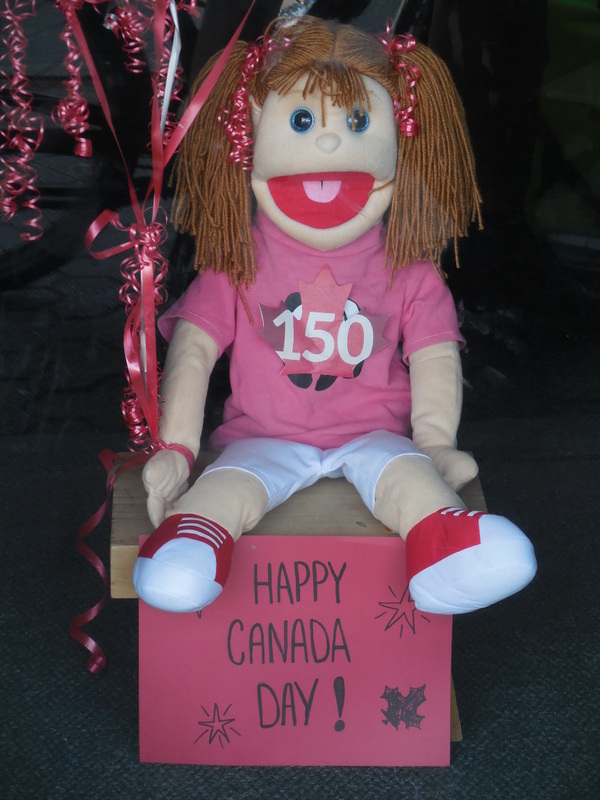 Spotted later in the day – they are into it, whatever the day stands for

Exiting camp we had a nice ride on a sound side bike path that rang next to Highway 19A.  Our first stop was only 100 meters down the road where we passed the 50th parallel sign/marker – not bad having started near the 65th parallel.  Views out across the sound were great as well – lots of boats out fishing early this morning, along with a “local” few sunbathers. 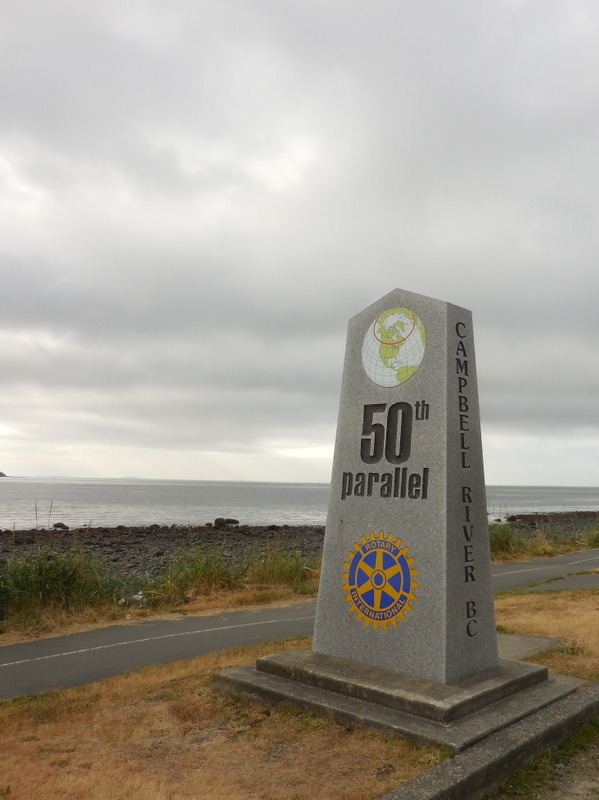 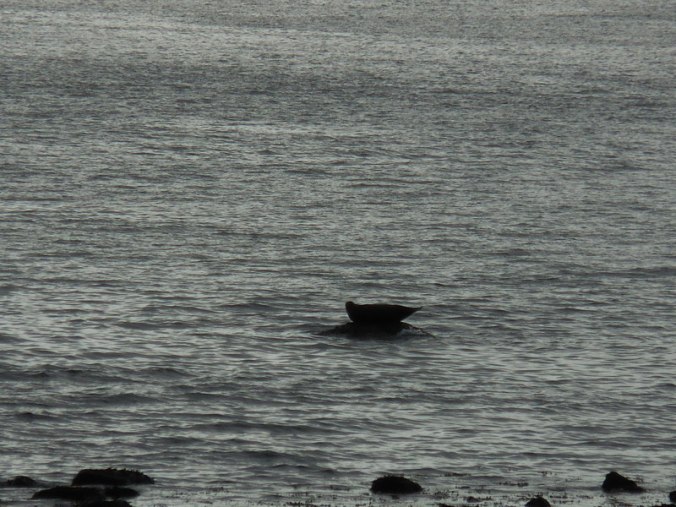 Local sun bathing on a rock 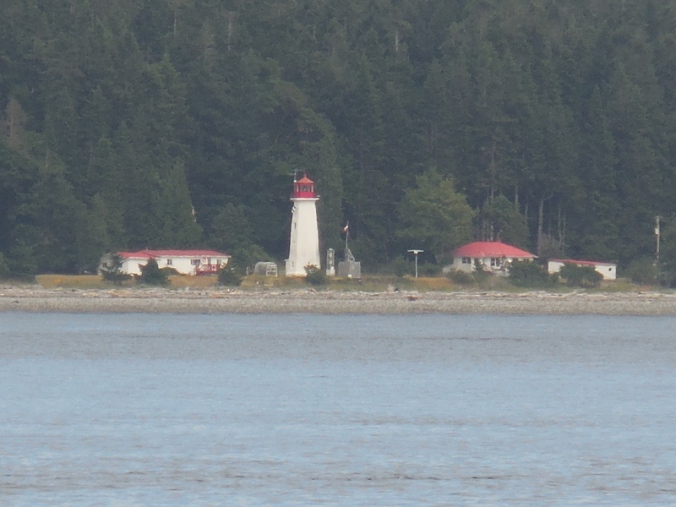 We had to ride about 4k to reach our first targeted stop – Serious Coffee (that’s the name of the cafe we found online).  They didn’t open until 8AM but we left much earlier than needed to reach Willow Bay where Serious Coffee is located.  In truth, both of us were pretty happy to leave the Campbell River Fishing Village as soon as we could – not the best place we’ve every stayed but certainly one that will come up in later conversations (and/or negotiations on nicer lodgings down the road).

We were too early for coffee but that was ok as it gave us the chance to look at the new chainsaw carvings at Willow Bay.  They take their chainsaw carving quite serious up in these parts.  There were 10+ new carvings for this year as well as a good number of them gracing the water and shop fronts from past years.  Below is a sampling. 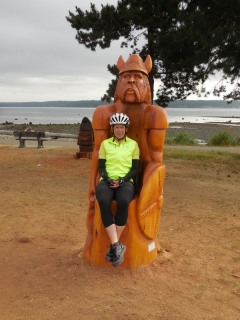 Oh yeah, Serious Coffee was good as well.  We had fresh from the oven muffins (each our own with no sharing) and picked up a couple pre-wrapped day old scones for the road.  As we were trying to enter the store at 8:07, stage 2 of the Tour de France was finishing on their TV.  They had forgotten to unlock the door but I could make out the race on the screen behind the door.  It was an exciting sprint finish but a bit surreal knocking but not really wanting the clerk to come until the finish – she came just at the finish – Nancy handled the conversation as I grunted oh and ahs at the TV.

We had a short ride today and only 27k to reach a Google maps recommended cut off.  Up north Google cut-offs would have meant dirt so we were a bit dubious.  Well this time Google got it right and we ended up out in the hinterlands of the island interior, surrounded by farms – real and gentleman farms.  The road was very quiet, except for the many cyclists we saw.  Most folks wave but no one really stops for a chat – out here, unlike up north, there are lots of people on bikes and you don’t automatically gravitate to the shoulder to compare notes. 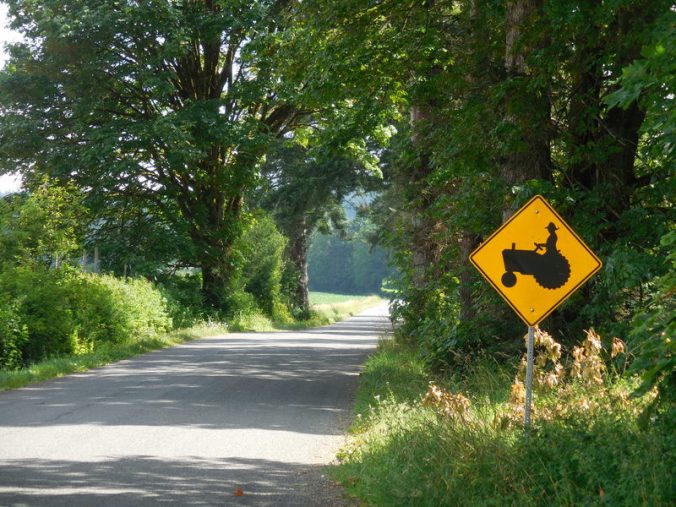 We made it to Courtenay just in time for a second coffee and to eat our scones.  We found what looked like a nice cafe and their coffee was nice, but they didn’t seem to be baking much on a Sunday.  So, having our own scones worked out well.  While there we looked up the check-in time for our hostel and distance remaining.  We had to get going, with 9k to ride and only 3.5 hours to do it!  Needless to say, we lingered over the coffees.

Eventually we had to head back out and ride the last bit of the ride.  For the record, it is mostly uphill from Courtenay to Cumberland, but even at our pace we made it without issue.  We found a cafe serving all-day brekkie and settled for a late lunch.  Still having a few hours to kill before the hostel opened at 3PM, we did the only sensible thing and retired to the Cumberland Brewery for a nice IPA.

Weather has gotten warm all of a sudden and sitting on the brewery back deck just out of the sun was just the ticket.  It helps that Cumberland is a bicycle town.  They are well known for some serious mountain biking and the entire patio was covered by folks refreshing after their various trips into the woods.  We almost had trouble finding a place to park our bikes, there so many bikes already lining the fence surrounding the patio.

Several folks asked us about our trip, which is always fun – except we can’t say that we started in Fairbanks any longer.  Sure, folks have heard of Fairbanks but it’s just too far away for it to register.  We now tell folks that we started in Alaska.  If we get to details, we mention Fairbanks.  Generally, if we’ve gotten to that point in the conversation, throwing in a “we’re riding to Argentina” is the kicker.  Today we were told that our bikes and bags are too clean for having ridden that far so that may get me out of cleaning the bikes tomorrow on our rest day.

We are staying at the Riding Fool Hostel here in Cumberland.  It’s a pretty cool place with a great vibe throughout.  I’m not sure how much better it can get: a microbrewery across the street, pizza and Mexican food on the main drag, a town full of bicycle riders and a rest day lie-in tomorrow.  This is really living!

After we leave here it is only a couple of days ride down to Victoria, where we have lined up a Warmshowers host for a couple of nights so that we have a chance to see the city.  Then we cross back into the US and head around the Olympic Peninsula.