First just a quick note on our last post…  Thanks to everyone who commented and gave us so much support.  It really does mean a lot to know that you guys are out there.  Until we “clear the area” we’ll be leaving further details out of the blog.  Just know that we are both safe, not hurt and we’ve got the Royal Canadian Mounted Police on the case.  The ride continues…

Last night we caught up the Warmshowers host (Amy) that we were supposed to stay with in Terrace.  Amy had offered to host us but somehow the Warmshowers website lost a couple our messages and we were not able to connect with her once we got a little bit ahead of our planned arrival date.  Amy and her husband, and two young boys, have bicycle toured quite a lot, including some of the route we plan to ride in South America.  It was really nice talking to not only a bicycle tourist but really, just to someone from Terrace who liked bikes.  Amy helped us get our “vibe” back just by being so positive – thanks Amy.

Being back in the civilized world, today we got to try out a couple Canadian icons.  First, included in our room was a free brekkie at the attached White Spot Restaurant.  White Spot is sort of like a Denny’s if you live in the USA.  The other day while at the RCMP station, we heard a joke – something to the affect:

Q:  What do you see when you are sick to your stomach

Regardless of this less rosy endorsement, we decided to give it a try – heck it was free.  It turned out OK – nothing that you’d rave about but OK.  They forgot to fix Nancy’s eggs how she ordered them but the toast and fried potatoes were nice. 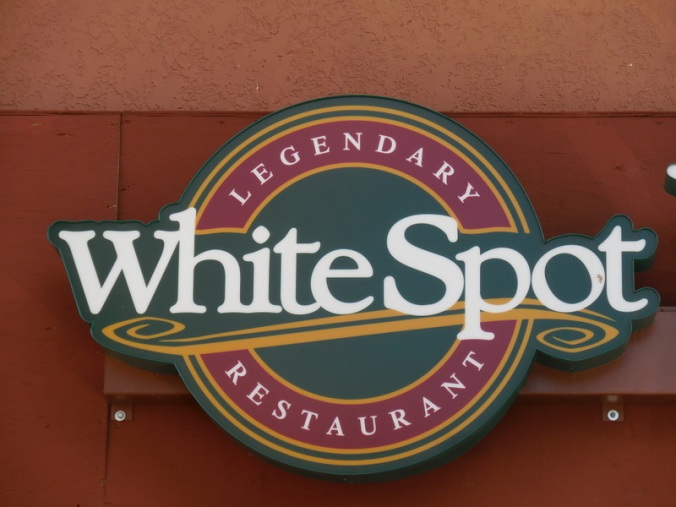 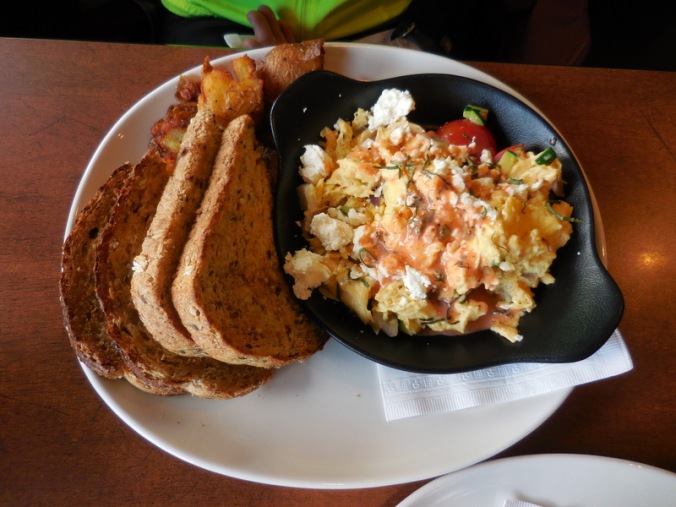 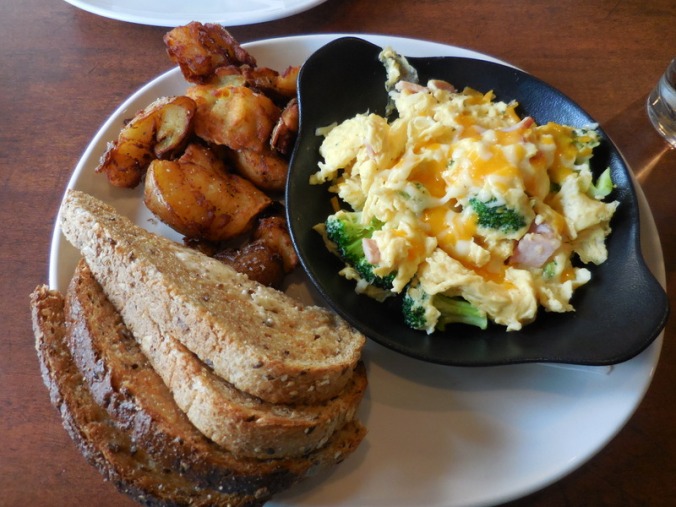 The second icon stop was at Canadian Tire.  Canadian Tire is a massive outdoor/camping/tool/automotive/you-name-it store.  You sort of need a map to make your way around the store and they really do carry everything – maybe not the most expensive brands but they’ll probably have one of just about everything.  We stopped there for fuel for our stove and found what we were looking for so they get a tick mark from us this time.  Funny enough, they also sold the mobile phone recharge cards we needed – right next to the Starbucks coupons. 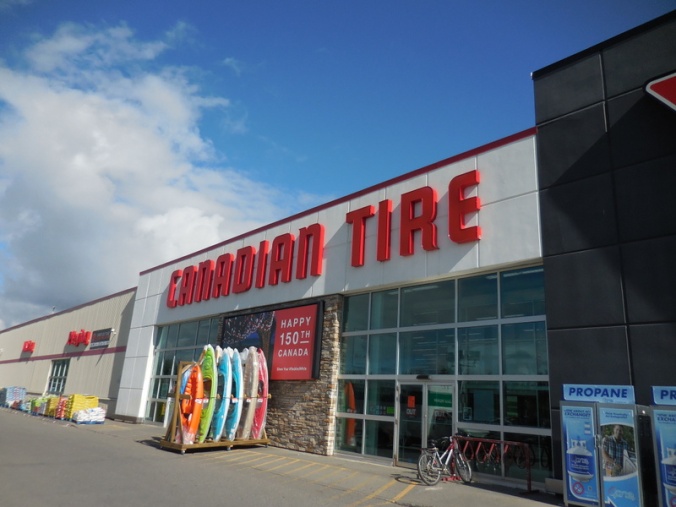 Before long we were back out on Highway 16, heading west and towards the coast.  Having looked at the profile, we knew that we had to small bumps (climbs) and mostly flat riding through the Skeena River Gorge.  For some reason, we had a lot less traffic than we did the other day riding into Terrace.  We expected to have more, with the port being located down at Prince Rupert.

We only made a couple stops the whole day, first at Little John Falls – a still frozen waterfall named after a 20-year old WWII casualty.  And later at the Exchamsik River Provincial Park for late morning tea.  The gorge itself was scenic, lots of snow capped mountains and a massive river running down the middle.  It reminded us a little bit of the Columbia River Gorge back in Oregon. 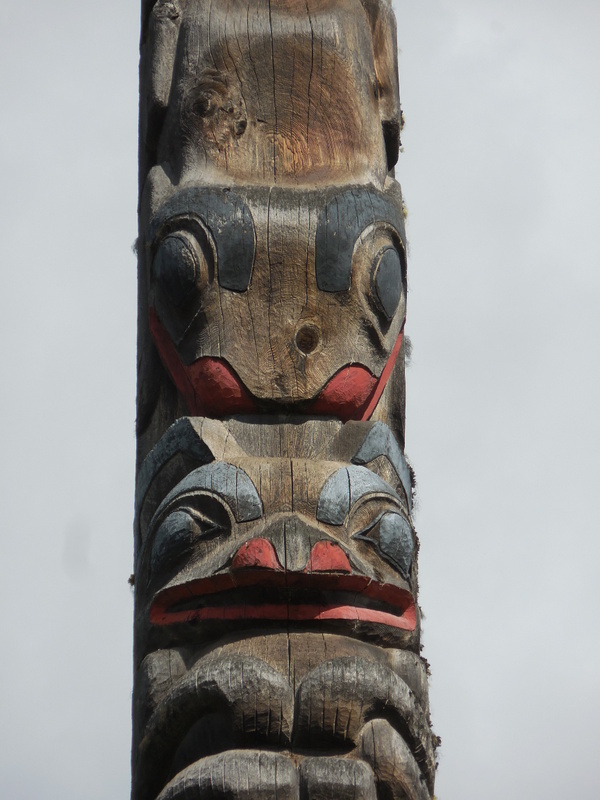 Totem pole spotted on the route 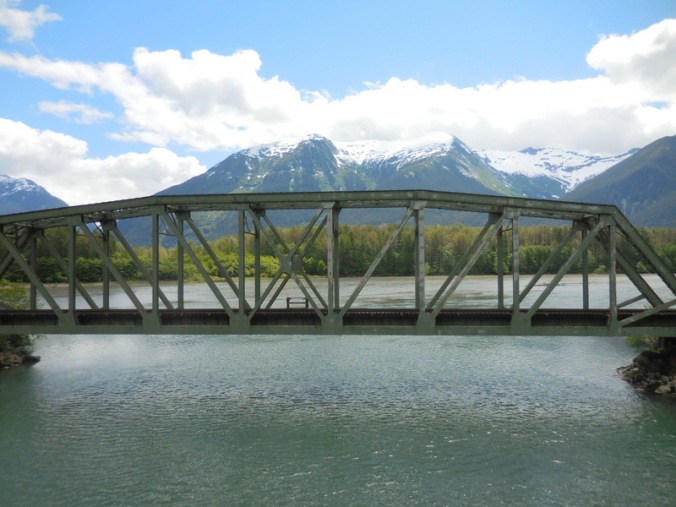 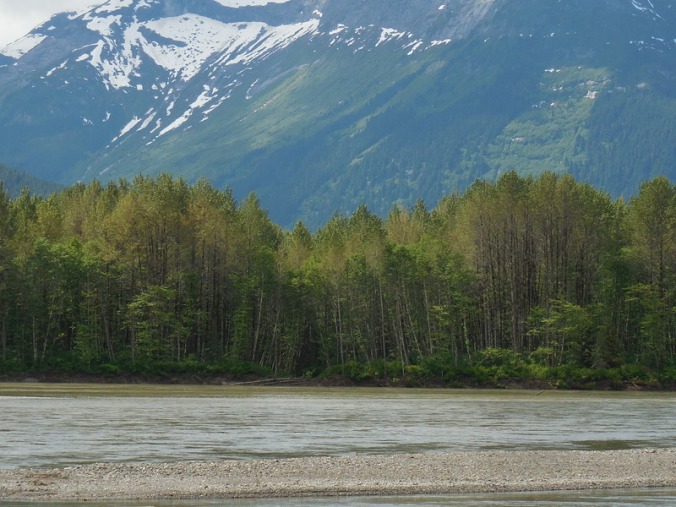 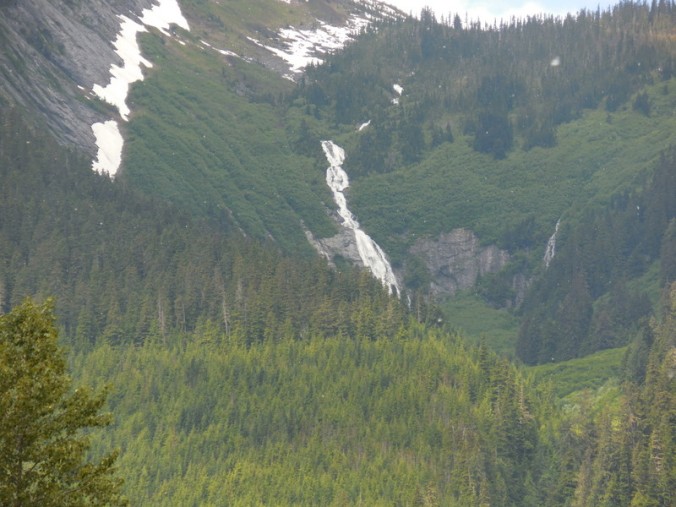 The ride itself was almost over before it started.  We had about 150k to reach Prince Rupert but decided to break the ride into two days.  Today was the short day with around 60k needed to reach Kasiks Wilderness Retreat.  The short distance and flat road had meant that we still made it camp early, even with all the iconic stops from earlier in the day.  At the resort we were greeted by June, the resort host.  The resort is only open when June is here – she works Thursday-Sunday.  She does everything, and I mean everything, from greeting, to cashier, to cook, to cleaner, to dishwasher, and everything in between.  Kasiks itself is an old logging camp site, right off the highway.  It’s not very “wilderness” but good enough for us for the night.  They do have rooms, but given the sunshine and the expansive grassy area we have elected to put the tent up. 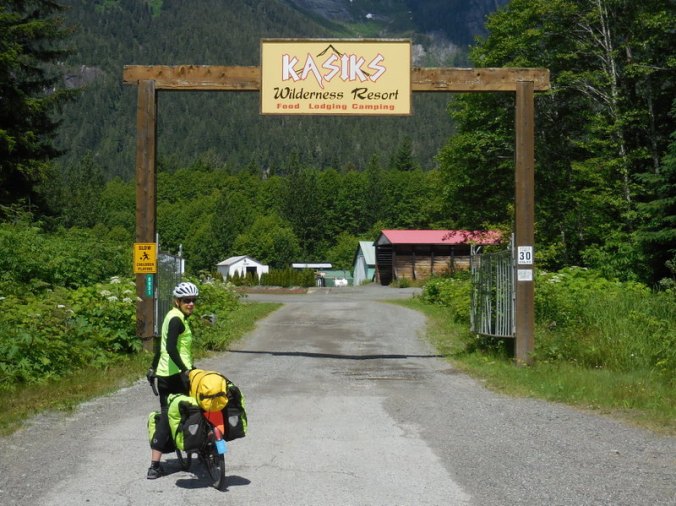 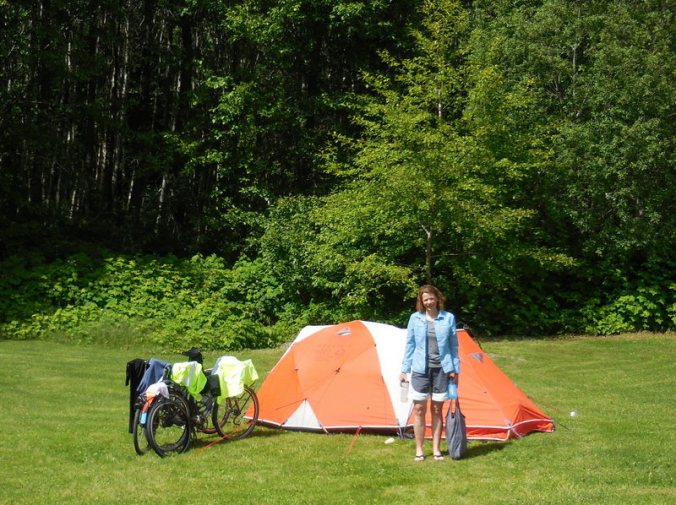 Ice cream Boy – yes I brought these back when checking in – hero!

After showers we joined June in the main dining room where she was making a fresh batch of homemade biscuits (cookies).  While we were there, eight utility line workers came in and sat down for their coffee break – very little was spoken as both June and the boys knew just what the order was.  There was a big flurry of activity, then they left and it was back to just Nancy, June and I.  There are no other campers here now as the Skeena River salmon fishing is closed for a month – until July 15.  No one is exactly sure why but the returning salmon count has been down significantly so they reduced the season. 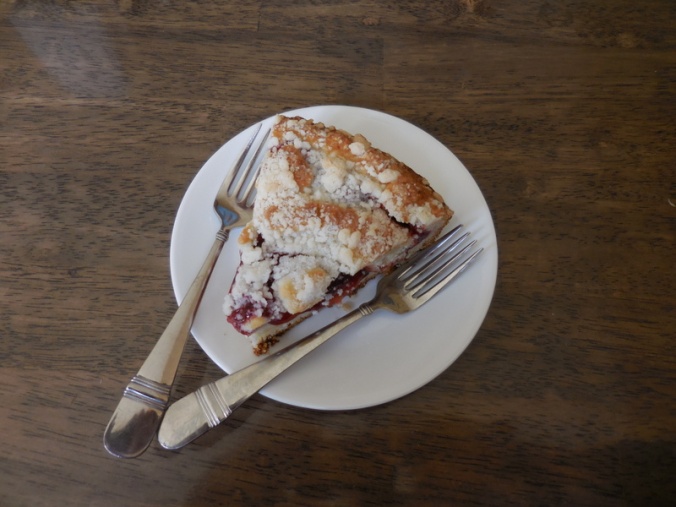 Soon, June will be making our dinner – BLT and a bacon cheeseburger, with curly fries.  I’m not sure that we rode far enough to earn this but June doesn’t really have a menu – she makes BLTs, cheeseburgers or toasted cheese sandwiches – that’s it!  But, given the look of her pies and coffeecakes (we tried a piece of the strawberry coffee cake as our afternoon snack!), I expect dinner will be just fine. 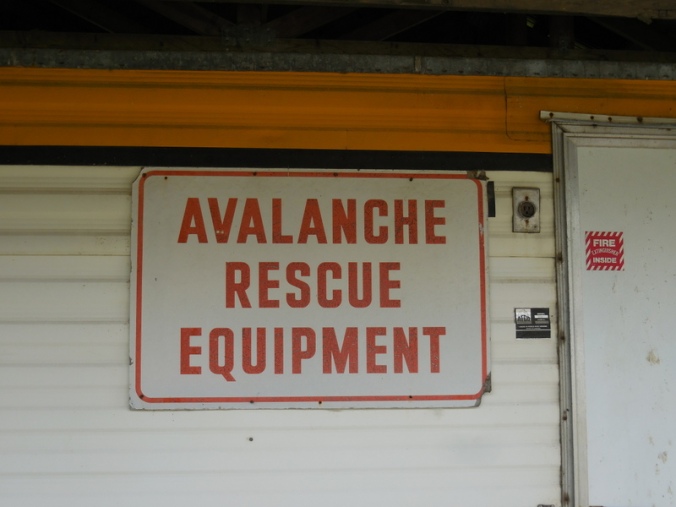 Just in case we have a problem – behind the lodge, in the white building on the left…

Tomorrow we ride 90k, stopping when we “run out of road”.  It’s been an interesting trip down through the remote areas of Alaska, The Yukon and BC.  We are looking forward to seeing Prince Rupert, the inside passage ferry ride and then really excited about Vancouver Island.  We have visions of stopping for flat whites (nice coffees) every couple k’s at fancy roadside cafes.  Perhaps Vancouver Island won’t be that developed but it’s sure to have more services than we’ve seen the last month.  (Editor’s note – unfortunately, we will still be in bear territory for at least the northern part of the island…) Reports to follow…