It was very hard getting up this morning – we loved having a bed for two nights. Though once up, our little band of marshals all agree that having brekkie in a toasty warm house beat the campsite mess tent. And Roman’s real coffee was well appreciated as well. Last but not least, we enjoyed putting our shoes on sitting in a chair, rather than on the floor of the tent. Yes, it’s the little things in life that make a marshal’s job easier.

We left Port Fairy in a light drizzle but the forecast called for it to clear out within the hour. It didn’t. I had an early corner and rain off and on until about 10AM. The rest of the gang were further up the road and managed to more or less ride out of the storm. 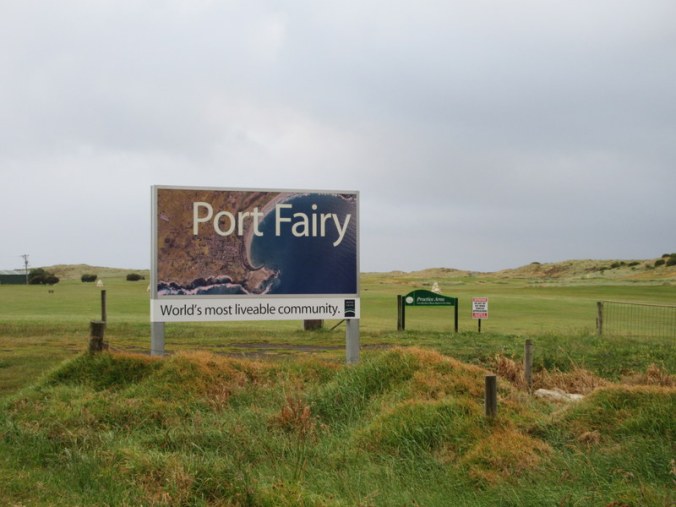 Who am I to argue – it is a nice town

For the record, I had one of the best corners ever. Our road crossed a major road at a downhill where we had traffic control folks holding up the highway traffic. I got to stand on the corner and tell riders that they didn’t have to stop. For a short 2-3 seconds I got a smile out of nearly 100% of the riders on the entire GVBR. Some had to be encouraged to keep rolling but every smiled as though they’d once the office sweeps. 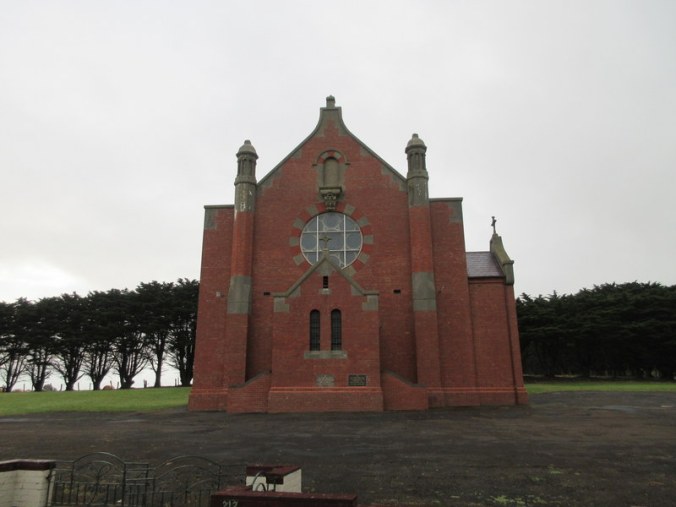 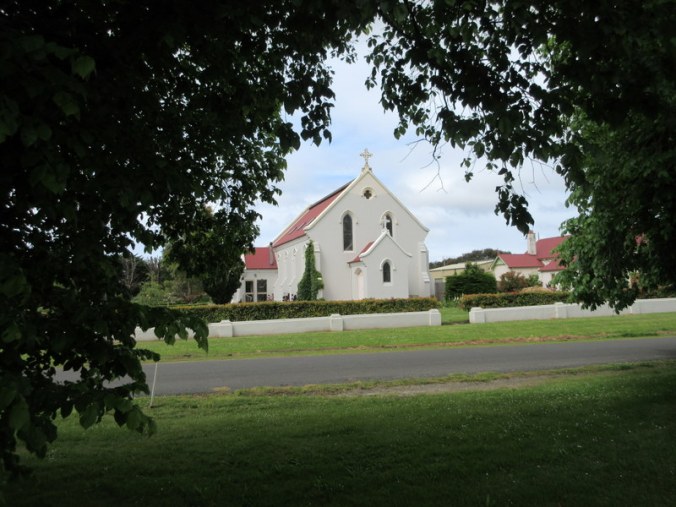 Another nice church before lunch

And finally, bring the blog back to earth – Bad Santa number 1 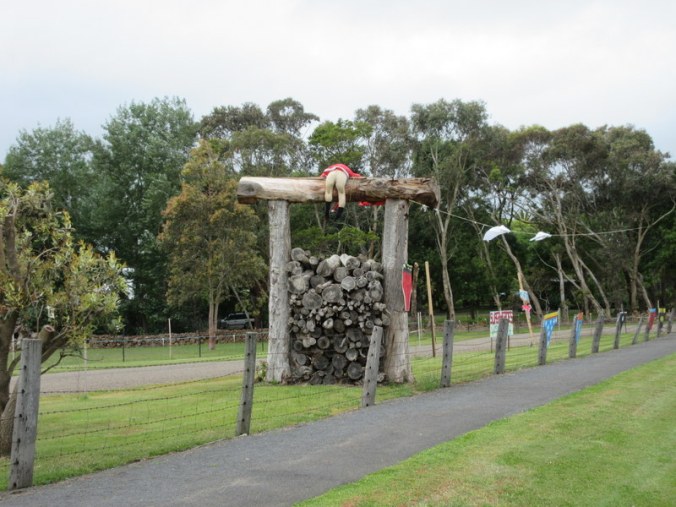 Nancy was at the lunch stop, which I rode to after we finished up at our corner. When I arrived I learned that they were holding riders at the stop as there had been a “medical incident” just past lunch. We heard later that a gentleman had a heart attack and they had to airlift him to hospital. We have not heard how he is doing but to a person, the riders were polite and patient. Moving on from lunch, everyone was a little quiet, no doubt thinking of the poor fellow in route to hospital. We hope that he is ok and makes a speedy recovery.

20 meters behind the crowd, this wonderful little waterfall

We joined back up to ride after lunch and had some more classic, one-lane country GVBR roads to ride on. They were more or less motor traffic free, which was fortuitous as the bunched up riders from lunch were quite thick. We passed a ton of rides, twice. The first time was normal riding, the second time was re-passing them after we stopped to help a group of school girls. One of their riders had pain in her ribs and they didn’t have any ibuprofen. We didn’t have any individually wrapped pills but the teacher felt that Nancy looked safe enough to take her drugs. 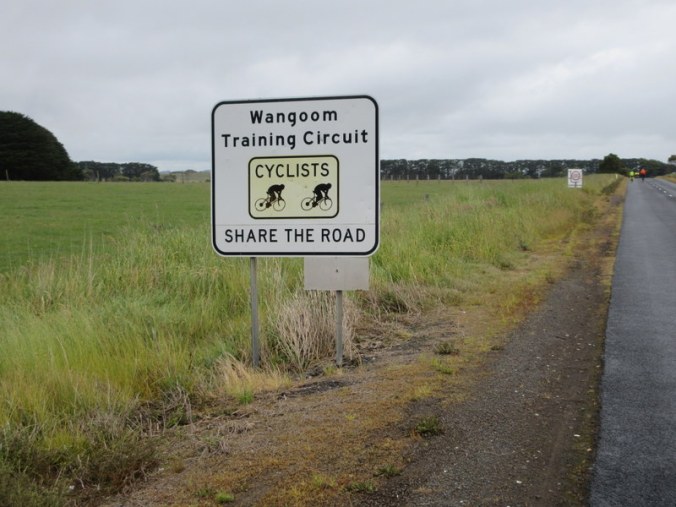 Seen on our nice little road…

The last 30k were very windy – mostly headwinds. We took turns leading with my primary role being a speed burst when kids tried hanging on our wheels (drafting). We weren’t specifically trying to drop a bunch of kids but didn’t think it proper for a couple marshals to pull them along – probably a little faster than they were comfortable riding.

We pulled into camp before Richard, our house-mate from Port Fairy, made it to site with our bags. And adding to that minor stress, they seemed to have lost our tent. Both of these problems worked out easily enough and more important, before the showers got too busy. We celebrated no shower queues with chocolate milkshakes from the camp main street ice cream shop – perfect.

We’ve made it to the famous Great Ocean Road. We passed by a few photo stops coming into camp and tomorrow we ride out to the Twelve Apostles, some rock formations that run along the coast. We are camped on an airstrip that hasn’t been used in forever – I think they only just mowed it for us. The ocean is only just over the sand dunes in front of our tent so I went over and grabbed some photos this arvo. 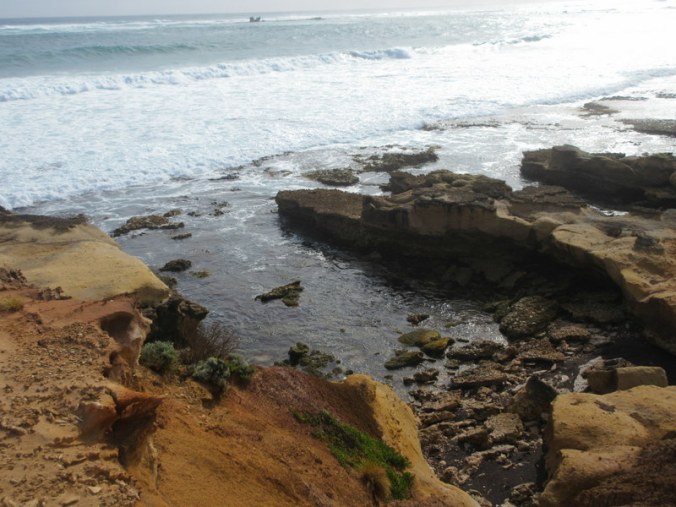 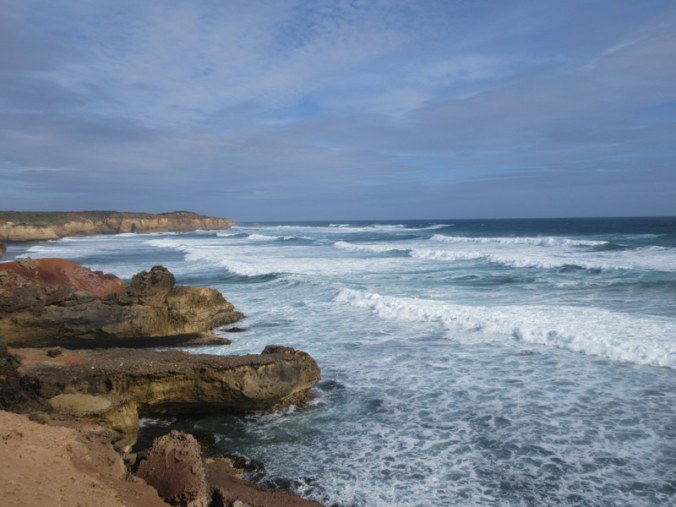 Looking east on the Southern Ocean 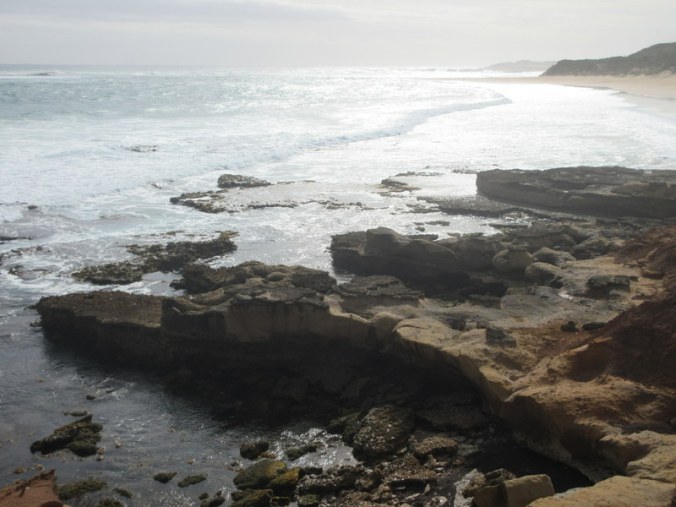 Tomorrow we head for Dean’s Marsh in the Otway Mountains. It is supposed to be very scenic but I can’t find many people who have ridden that way. I guess everyone just keeps heading down the Great Ocean Road. Getting there is not going to be easy however as before we get there, we have to climb infamous Lavers Hill, which is a 20k climb – a big climb for Australia. Some wind and rain is forecast…