We arrived in Robe pretty late yesterday. It turned out to be a 7 hour bus ride from Melbourne. Yep, driving half-way across the country is a long way – Australia is big.  So much for getting in at noon and having a look around town. By the time we got the bikes back together and the tent organized, it was time for our ride marshal team meeting and then dinner. It was a long day, even though we sat around most of the time. The ride marshal team has a few new faces but many repeat marshals. It was fun catching up on the news and seeing old friends.

Nancy met Janet at the bus in Melbourne – She rode her first GVBR with her 12 year old son. Her son is now 45 and she’s ridden 32 GVBRs. Janet looks good and strong – she is over 80. Good on ya Janet!

Some of Team Marshal

Some our fellow tents – cozy

Camp seems too small for 4,000 riders but we’re not sure how they count folks. The ride is a 10 day ride but it can also be ridden as individual 5 day rides. Perhaps we’ll lose and gain a bunch of folks at the half way point, meaning that 4,000 people take on the ride in total. Either way, queues for the toilets and dinner ended up being pretty short. The longest queue all day was at Rotary tent where we deposited our bike boxes so that they could take them safely to the finish. There are so many queues on a ride like this, you get used to it and sometimes you jump in any queue that you see, even if you don’t know what it is for. We jumped in the coffee queue at lhe lunch stop today, thinking it was the lunch queue. Everyone else did as well – we’re like a flock of sheep at times.

So, onto today’s ride. First I’ll report on “Nancy’s first corner”. We lucked out getting one of the first corners right out of camp. All the riders are keen and well bunched up. We worked the corner from 6:20 until 9AM and our shift was done for the day. The corner had some cross traffic but it was mostly quiet on an early Saturday morning. We were telling riders to turn right and watch for traffic. At times they couldn’t hear or understand us. You really have to keep commands short, clear and to the point. Nancy did well pointing to the right, she followed my instructions perfectly. I don’t think I’ll get away being “the corner boss” for much longer however – it’s really not that hard to figure out.

Nancy on her first corner 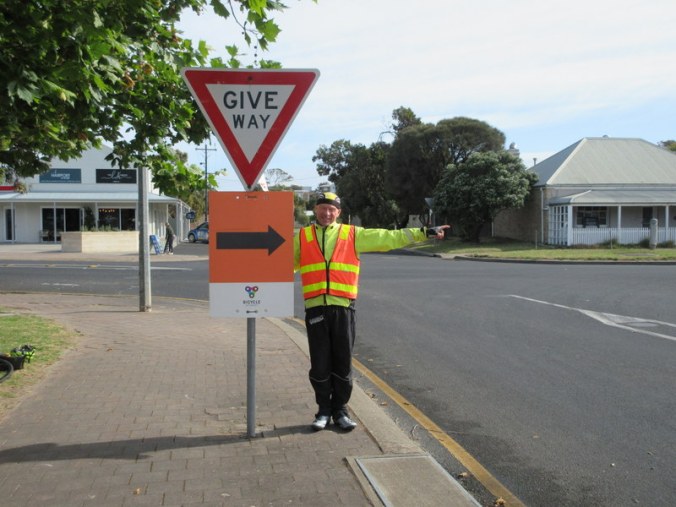 Dave providing training on the first day – this is almost too much fun!

The last riders pasted our point about 8:30 and we still had time to duck into the shops for a coffee before we hit the road. We had a great tailwind all day and really moved along. It didn’t feel like 4,000 riders went past our corner but for sure it felt like that many folks at lunch. Working the corner is funny, you get into each moment and both time and riders pass by quickly.

The scenery all day was pretty much the same, that is flat, sandy heath headlands with small gum trees scattered about. We didn’t really stop much as the wind made riding so much fun. Having left our corner after all the riders meant that we were passing tail enders all day. One young chap riding with his mom and dad seemed to making great time on his little BMX like bike. Turns out that his bike was an ebike – he had a motor.  What a fun way to get a 6-year old out on the trip!

We had lunch Beachport right on the ocean. We had a few spits of rain coming into town but were in full sun by the time we got through the lunch queue and found a place to sit. The wind picked up after lunch and we flew into Millicent arriving only 30 minutes after camp opened. 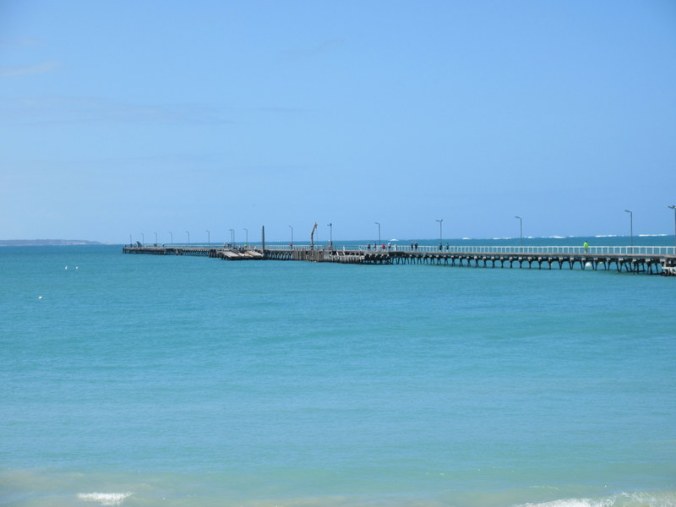 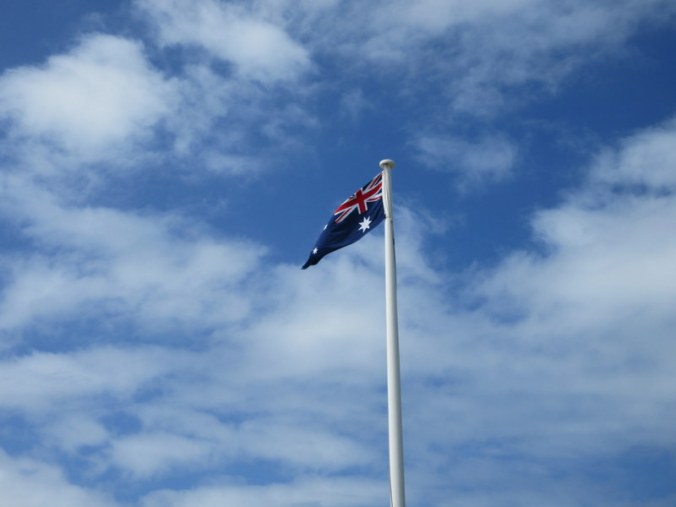 Us at lunch – all smiles in the dun

Somewhere near the end of the ride, my bottom bracket started to come lose. So that gave me something to do this arvo. I dropped it off at one of the shops just to be sure it’s done correctly. No dramas, they fixed it within the hour for a small fee.

So tonight we are in the hopping burg called Millicent. There are 5,000 people living here, which means that tonight there are somewhere close to 9,000 people in town. We walked the town and found a few shops open, but a few also closed. Someone forgot to tell the bakery that 4,000 cyclists were coming today – go figure – and they closed at 12:30.  Lots of lost business opportunity there. They’ve done a nice job decorating town with some very nicely knitted bike covers, including a smashing bridal number. At least the local knitting club got the memo about the bikes coming to town. 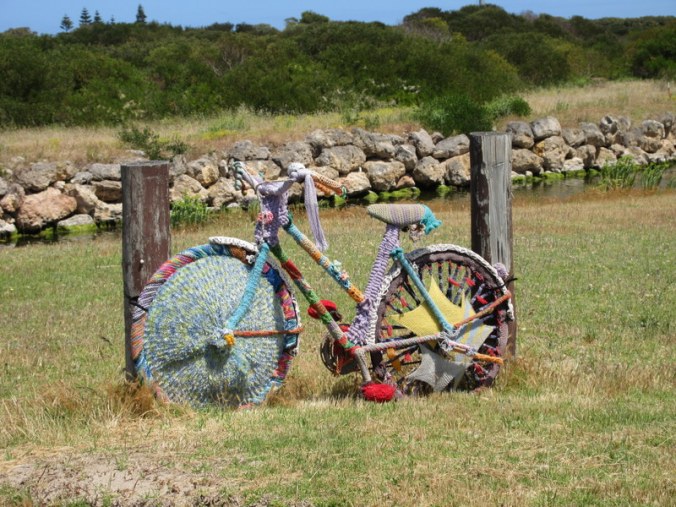 Knit bike, I guess that’s what you do in a small town 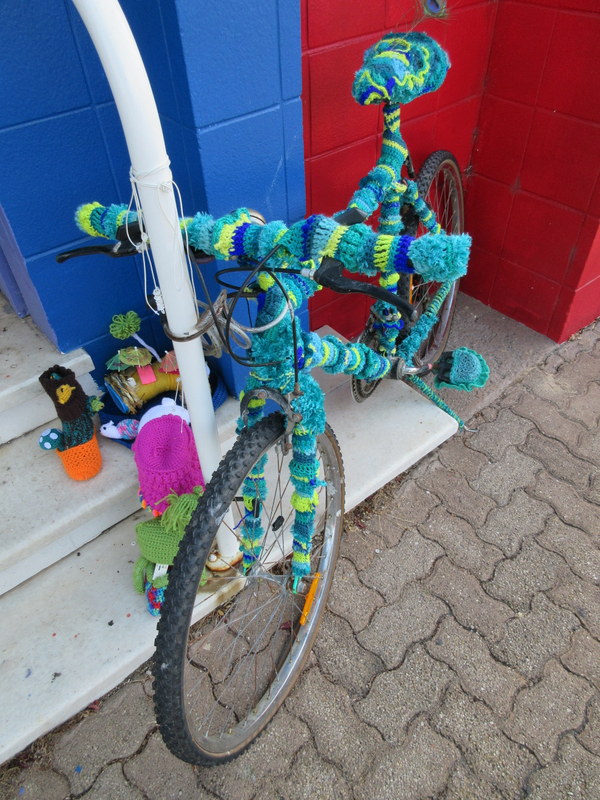 The bridal bike – good effort the folks in Millicent

Tomorrow we have another day about the same as today, mostly flat, probably a tailwind and perhaps for us, we’ll get a left-hand corner so that Nancy can learn how to cover that situation as well. Or maybe we’ll get another right corner and she can be the corner boss – I know, how exciting, now where did she go? She was here just a minute ago…