Cozy night in the bus stop – 6 of us laid out like sardines with not much room for error if you happened to turn over in your sleeping bag!  Temperatures dropped enough outside that despite the heat from 6 bodies in the small space it was pretty cold inside.  It was our first slumber party in some time.  The snorers were not too loud, I had to elbow Dave a few times however. 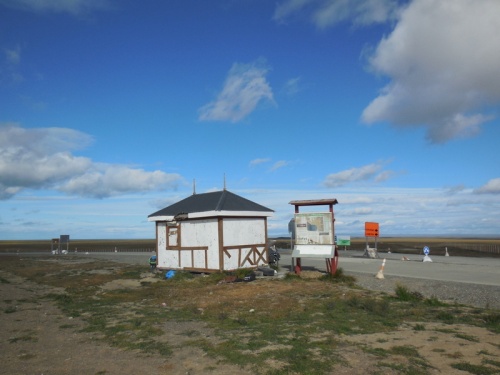 All six of us slept in there, cozy

The wind was still howling outside when we went to sleep and still going strong when we made a trip outside for a nature break about midnight.  But early this morning, maybe about 4am or so, I woke to near silence (other than the snoring in the room) – the wind seemed to have stopped completely.  But it was not to last, as by the time everyone was stirring about 7am the wind was blowing again though not as strong as last night.  We were not up too early, as the big plan for the day was to go visit a colony of king penguins that resided about 15k from the bus stop.  The penguin park did not open until 11am, so there was no reason to rush. 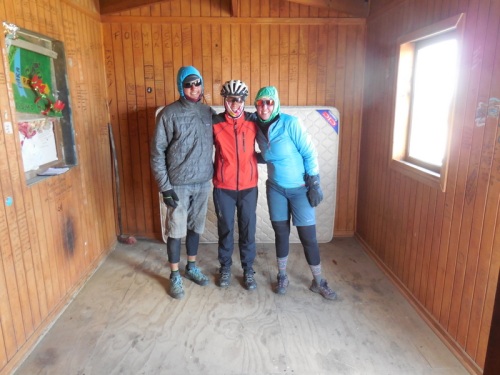 The inside, after Curtis and Jenny left – Andy, Nancy and Sarah

The road to the penguin park is not sealed and is pretty rough, with lots of washboard and thick gravel.  It meanders about a bit as well, so we had some good crosswinds and a bit of headwinds as well and the 15k took some time.  We arrived not long after 10 and the very nice caretaker let us in early so we could sit at some picnic tables inside that were a bit sheltered. He also brought out a big pot of hot water so there were coffees all around.  At 11am sharp he opened up the office to buy tickets (12,000CPS each) and then gave a little presentation on king penguins and the colony that is there.

Heading to the kings

Flat riding in the wind

Very remote station in the middle of Tierra del Fuego 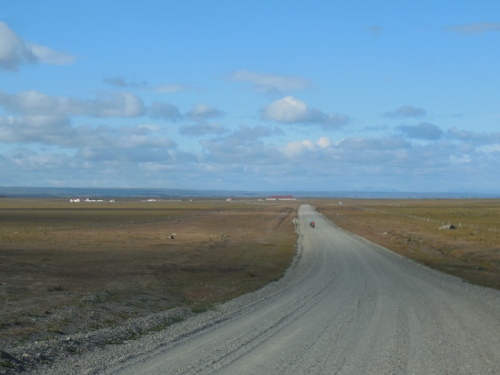 Looking out towards the steppe and station

King penguins apparently don’t live in the arctic but in the longitudinal bands between 45 and 55.  The colony that is here only showed up in 2011, though they have apparently found bones from many centuries ago so they have been here before.  There are two groups at the park – one larger one that looked like it had 40-50 penguins and another smaller one that had less than 15.  There are two separate viewing points to see the two different groups – it is relatively simple infrastructure but enough to allow you to see the penguins without disturbing them too much.  They are quite fun to watch, waddling around, stopping occasionally seemingly to chat with each other (they are probably saying, ‘Here come those weirdos again, staring at us from across the creek’).  The park has only been open for a couple of years – before that people could get much closer to the penguins so it’s good that they have put some protections in place.  All in all it was a good visit, worth the trip despite the bad road to get there!

On last photo before we get to the birds…

Three guys hanging on the edge, having a bit of a chin wag 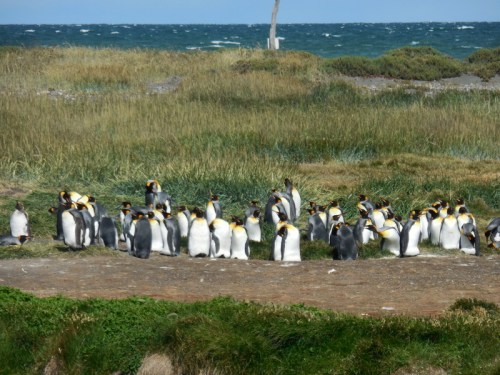 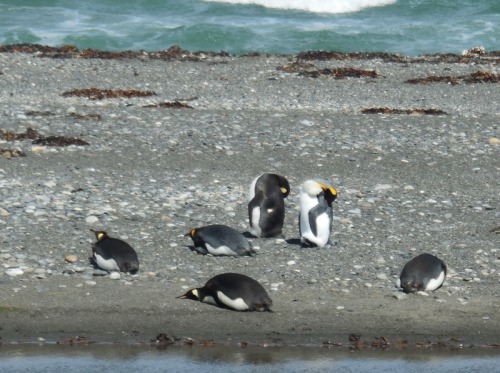 The small group, we think a few of the adults were out swimming

For us it was an out-and-back ride.  After a last look at the penguins we headed back out on the road to make our way back to the bus shelter for lunch and to figure out what we were going to do.  Curtis and Jenny would also head back to the main road, but they were going to check out another hut near the penguin park as a possible place to camp for the night, as they have a lot of extra time.  Sarah and Andy are taking another route that continues south of the penguin park so we said goodbye to them for the time being – we expect to see them further south in a few days in Tolhuin. 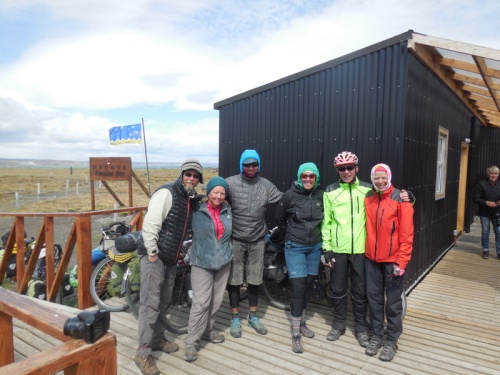 When we got to the bus stop Marcel, the Swiss rider we met on the ferry yesterday, was there.  He started in Porvenir this morning and was headed to the border crossing.  We ate our lunch and debated what to do.  After checking the weather forecast for the next couple of days and looking at the blasting tailwind we would have if we rode on, we decided to go ahead and head for the border as well.  Best of all, the road was paved for most of the way so we could really take advantage of the tailwind, finally!  It only took us a bit over 2 hours to go the additional 56 kilometers to the Argentina border and the paved road was so nice after the rough road from Porvenir.  Exiting Chile was simple, then we had another 12k or so of unsealed road to get to the Argentina immigration office, where the entry procedures were quick.

Another remote station, or at least one of the outbuildings

We had heard that there was a room at the immigration control area where travellers could stay so we asked about it and were shown where it was.  The room is decent size and has a very efficient heater and even a two-burner gas cooktop.  There is also a hotel right nearby, so we went to check it out to see how much the rooms were.  When we got over there Marcel was sitting in the entry way and told us that there were no rooms available as there was no water at the hotel.  Hmm, not so good.  He had also been told about the room at immigration control so was planning to go there once he finished using the Wi-Fi at the hotel.

We bought a few drinks and snacks and headed back to the travellers room, as it was our only option.  Turns out there is no water here either – the whole complex is without water, apparently due to a pump that has broken.  I think this has actually been broken for several weeks.  Thankfully we have enough water with us (though we could have bought more over at the hotel).  The room is warm, the gas stove works, there is electricity and the area is full of policemen so it’s not too bad.  The only bad thing is that because the water is off the toilets don’t work.  They are supposed to be closed but aren’t really, and I’ll just let you imagine what toilets look like after several weeks of use without any water….. 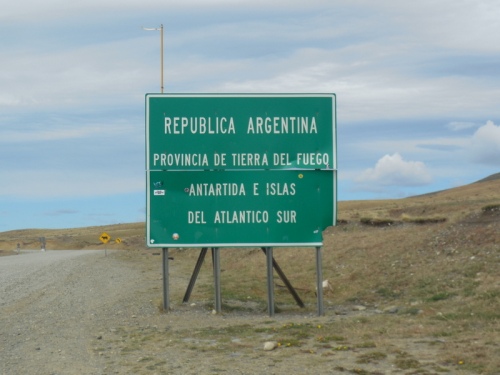 Welcome back to Argentina, our last border crossing 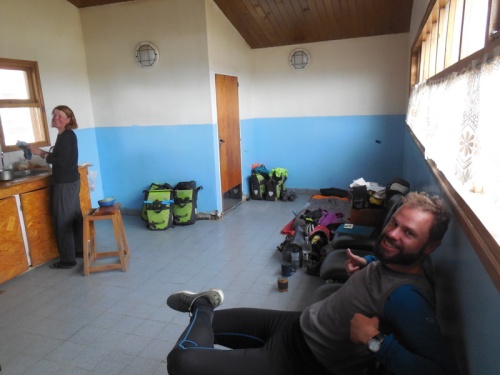 Nancy and Marcel in the border immigration room, also our home for the night

We have spread our sleeping bag out on the floor, made dinner and are now getting ready for bed.  I am not sure if this border is open all night long – if it is, it might be kind of a noisy night, as we are literally right next to the traffic lane where cars and trucks go through to be checked.  But at least we are not out in the cold wind, so we can’t complain (except maybe about the bathrooms).

Tomorrow we have an 80k day to get to Rio Grande, the next town.  We head south, so we will likely not have our screaming tail wind but hopefully it won’t be too strong of a cross wind.  We will try to leave early in the morning to take advantage of the calmer winds.  And, yeah, it’s all pavement from here!  We are ahead of schedule now to reach Ushuaia by 7 January so may take a day off in Rio Grande – hopefully in place that has water.  Tierra del Fuego is a tough place for bike touring, that’s for sure.

This entry was posted in Americas trip, Argentina. Bookmark the permalink.