Our night in the abandoned hotel was okay – Dave was snoring away all night, not at all bothered by all of the sounds around us while I woke up every couple of hours to some new sound which turned out to be nothing.  Though, we did go to bed at 8:30, so even with all of the wake-ups and getting up early (5AM) that was still quite a bit of sleep (though not entirely restful, as you can imagine). 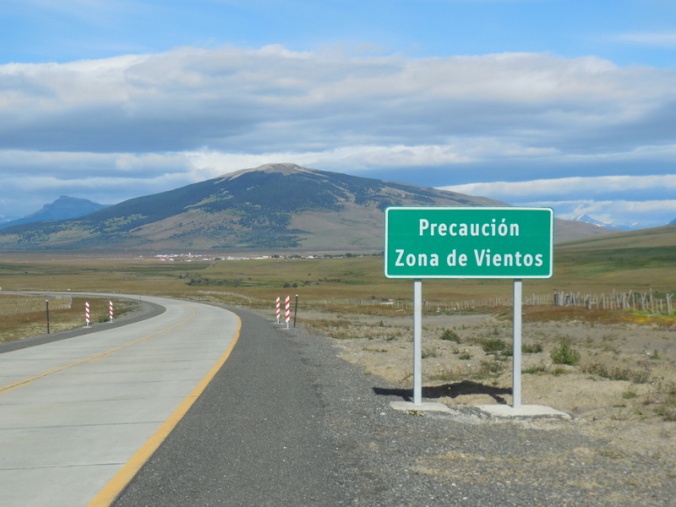 Part of the roof of the hotel has collapsed and the metal sheeting banged and creaked quite loudly in the strong wind.  I said to Dave earlier in the afternoon that it sounded a bit like a loud clothes dryer, much like the sound you hear when someone has left coins or something else in their pocket and it is banging around in the dryer.  Funny how that sound then just faded into the background – we both just put it to the background, occasionally wondering when the buzzer would go off signalling that the dryer cycle was complete.

It is already getting light out at 5 in the morning but we had to turn our camp light on to get dressed and pack everything up as it was a little dark as a result of Dave’s handiwork on the window last night.  We wound our way back out of the maze of still open hotel doors and were on the road before 6:30, with the wind already blowing.  I doubt that hotel will last too much longer – the floors are already squishy and the rain is obviously coming in where the ceiling is being ripped off by the wind.  It would be interesting to know the stories behind some of these places – who built it in the first place, how long has it been there, why did they just walk away from it?  This place seems like it could be a good stopping point between the nearby Argentina/Chile border crossing (or further south in Argentina) and El Calafate.  But, too big a remodel project for us so we had to leave it be.  (Junior editor’s note:  Have a family dinner with the Petersons, everyone is talking about their latest remodelling project – but this hotel was even too big for Nancy’s ambitions) 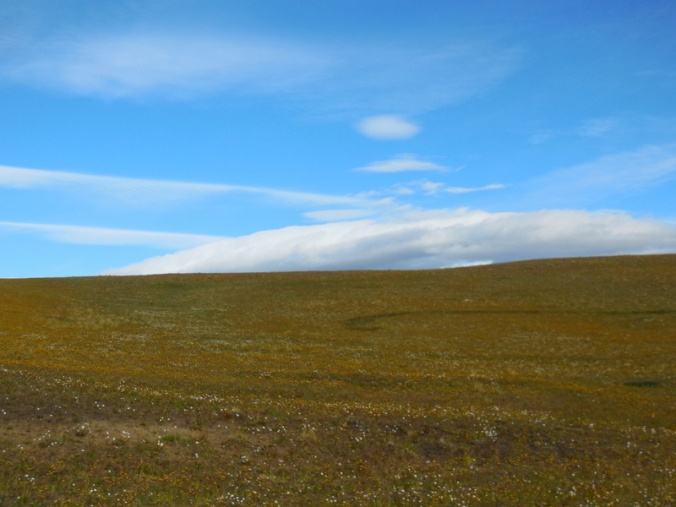 Looking west in the morning – nothing special, I just like the colours and an excuse to let Nancy take a little longer shift on the front – haha

The wind was definitely blowing as we set off but not nearly as hard as it was yesterday when we came in.  We were able to keep up a speed of almost 20kph for the first hour or so but as the cross wind increased our speed started slowing.  The road twists and turns a bit, so there were stretches into a head wind as well.  By the time we came to the turn-off to the Argentina/Chile border, where we had to turn due west on a dirt road, we were greeted by a howling gale (again) coming right at us.  I am beginning to not like Patagonia very much… 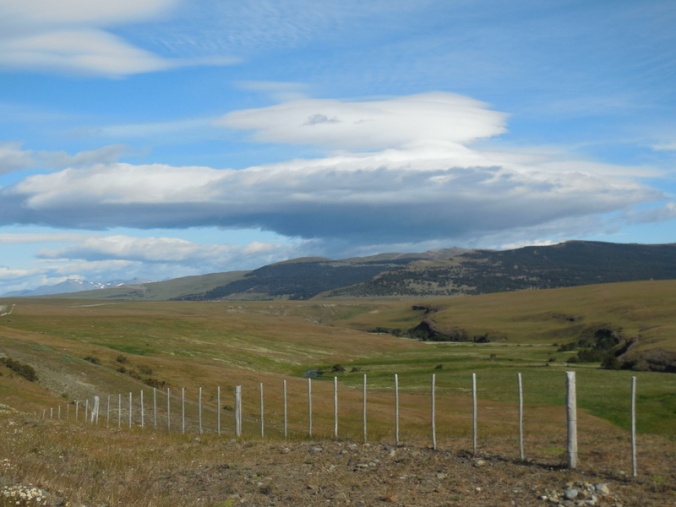 Notice Nancy leaning – the wind is coming from the left here, just as she rounds a corner where a small hill blocked the wind – bike skills get a workout in the winds, along with the legs

After about 6k of dirt road we came to the Argentina immigration building.  The process of stamping out took very little time – and for once we were actually wishing it would take more time so we could stay inside the building out of the wind!  No such luck, so on we rode into the wind.  There was only a bit more of the dirt road and the Welcome to Chile sign signalled the return of the pavement – yeah.  We had another 7k or so to ride until we reached the small village of Cerro Castillo, where the Chile immigration office is located.  There was no one waiting when we got to the building so our entry procedures were pretty quick.  We confirmed that we had no fresh fruits or vegetables and they x-rayed one of Dave’s bags with no issues.  Yeah, our nuts and honey and other food seemed to be okay.

Argentina border post in the middle of, well, nowhere 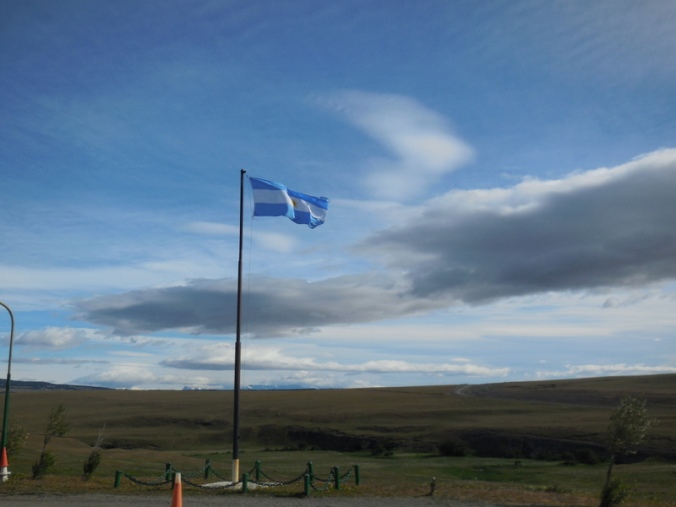 We are riding right to left – dang

So, at this point we decided that because of the wind it was probably not a good idea to continue our way up toward the Torres Del Paine National park.  We knew we had at least 35k or so before we could get to any structure that could give us protection and the route seemed to be directly into the strong wind.  After the last few days’ experiences with the wind we weren’t interested in gambling on whether we could make it so we pulled the plug and ended up at a hotel here in Cerro Castillo.  We looked at a hospedaje (full) and another hotel (nice, but quite a bit of the way out of the village and not much cheaper) but ended back up at the first hotel we looked at, the Hotel El Ovejero.  It is crazy expensive but we are back in Chile and were not too excited about camping out in the wind.

Horses were very important here in the stepp and are still used for ranching – we saw some horses up near the border that were standing in a row, bums to the wind.  I don’t think that they like the winds much either.

It always feels odd to be back in a hotel after a couple nights of wild camping, especially when those involve abandoned buildings!  Your own bathroom right there (rather than having to walk out to the back 40 to find a tree or something, which is especially not fun in the middle of the night), running water, a shower (though this one is so clean I attempted to walk right through the shower door), and the wind gusting against the windows instead of in your face – all things you really come to appreciate after being out in the elements for a few days!  This hotel is nice but the internet isn’t working (surprise surprise) and the water coming out of the sink is a little colored (we filtered it) so it really doesn’t warrant the high price tag but when it is all there is to get out of the wind you pay what you need to!  Dinner isn’t served until 8:30 so we will surreptitiously cook our own dinner and hope they don’t hear it or smell it too much!

Our expensive hotel room, Nancy was out in the hall looking for a broom, before she realized that she doesn’t have to sweep the floor in these fancy places.

Unfortunately our stop here means we don’t have time to take the route through Torres Del Paine that we wanted to and make our booking for 23rd December in Puerto Natales.  So we will have to save our visit to the park for a later date and be satisfied with the distant views of the mountains that we have been seeing.  We arranged an extra day for our place in Puerto Natales so tomorrow we will head directly there.  It is only 60k or so from here and mostly south so we are hoping that the winds won’t be too bad.  Not to worry, there is a bit of rain in the forecast, just to keep things interesting…