Today was a really hard day.  It wasn’t our longest riding day of the trip.  It wasn’t the most climbing we’ve done in a day.  The weather was generally fine to great.  We still had one of our lowest average speeds of the entire trip and we were pedalling the bikes for more than 6 hours – with very little coasting.  Today’s difficulties came in the form of some really rough roads (at times) and some really short steep uphills.  And in some cases, short steep uphills with rough roads at the same time.  There was lots of grunting, riding in first gear, and a little pushing.  But we made it to Cochrane in the daylight so all’s well that ends well.

We were up at the usual time but had our first delay within minutes of me exiting the tent.  While I was using the facilities, one of the camp dogs paid Nancy a visit.  The dog could be best described as a little crazy, hyperactive and perhaps anxious all at the same time.  He poked his head under the tent and tried to snuggle with Nancy even though the inner tent was not open and Nancy was on the inside.  She tried to shoo it away but not before he managed to accidently tear a small hole in the mesh wall of the inner tent.  He was still bouncing, rolling and squirming when I returned and it took some very stern words on my part to get him to move out.  We both felt a little sorry for him but we can’t really afford to have our tent shredded, even if the intentions are well-minded.  Just one more running repair job to work on tonight…

Nancy and the lovely camp hosts – without their not so lovely dog.  The hosts were just great and very willing to help us with our still poor Spanish.

Taken at 9:30 last night – we were in a deep valley but the sun was very much still up on the surrounding mountains.  We are getting “south” now.

And one more update from last night. Joe was having some wobble in his rear wheel and asked me what it might be.  I suspected a broken spoke but was surprised to find that not one, but two rear spokes were broken.  Neither Joe nor I had all the right tools and parts to repair his bike last night so he and Sarah had a slow, anxious ride to Cochrane today.  They made it and will be hitting the bike shop tomorrow – the last bike shop for a very long time.  If it had happened on our bikes, I have everything we need to affect a repair – and to think that just yesterday Nancy made some sort of comment about how many spare parts I am carrying, hmmm, maybe I shouldn’t say anything… (Senior editor’s note – go back and check, I did not say anything about spare parts generally, I only mentioned the four (4) spare tires he is carrying…)

We had a lovely, relaxing brekkie in the camp great room.  Using the camp’s stove, pots and dishes gave us time to pack up last night and linger over coffee today.  And we were still pushing out the gate at just past 8AM, after a nice goodbye from our camp hosts.  We would really recommend the Cerro Colors Campground to anyone passing by.

After the finishing up the small bit remaining of the downhill we were greeted straight away with a 10k climb over a stair-step set of hills.  The climb started and finished on Lago Bertrand.  It’s always fun to ride up and over a big hill, only to get back to exactly where you started.  Hey, welcome to Patagonia!  After a steep and fast downhill to the small burg of Puerto Bertrand, we made a southward turn down the Rio Baker.  We’d be riding down this river for most of the day.  The river itself was the most amazing turquoise blue and had some pretty nasty look rapids.  Within the first couple K riding down the river we passed 3 or 4 raft trucks with what looked like fishing drift rig set-ups.  A bit to wild for me but I’m sure that an adventure junky fisherman or two would love to wet a line on this river – perhaps wetting more than just a line.

Lupine on the Rio Baker

After about 30k we reached the confluence of the Rios Baker and Nef.  Baker is bright blue as noted.  Nef is milky blue/green.  It’s a good walk, maybe 30 minutes return, from the road to see where the rivers join and there was no safe place for the bikes so I took a solo walk/run.  My pictures didn’t turn out great but it would have been a great place to take a day and just watch – it was fascinating to see the distinct colours swirl and interlock – two rivers fighting for control of the other.  The confluence is the end of the Rio Nef but while being swallowed, it clearly won the battle of the colours as southward, the Rio Baker looks much more milky green that it did upstream.

Nef on top, Baker on the bottom 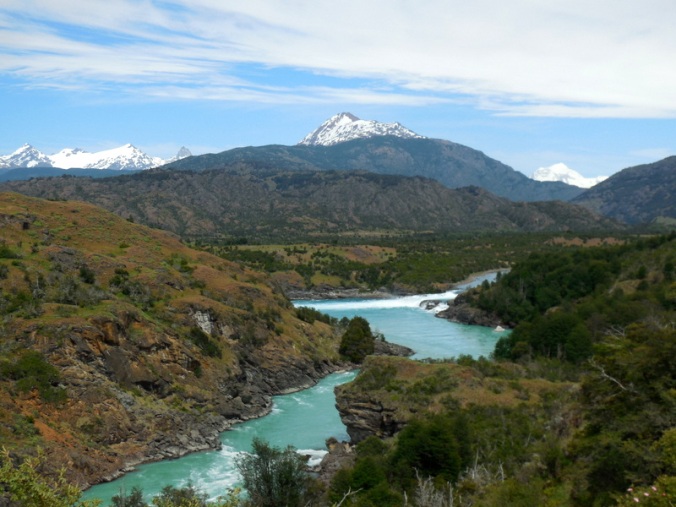 Looking back up the Rio Baker, just after the Nef confluence

From the confluence we still followed the Rio Baker downstream, but from this point on the riverbanks were too steep for a road.  For us, this meant going up and over surrounding hills.  We had four good climbs in the last 35k before Cochrane.  The first climb was the hardest but each of them had at least one short sharp gravelly pitch that gave us a good test of lungs and legs.

On the first hill we passed a mid-sized passenger van lying on its side.  It had a few, minimal, safety markers out but there were no people anywhere to be seen.  We rode by slowly not really knowing what to think (there were no people inside that we could see).  A little further up the hill we ran into a couple of Canadians on touring bikes who had started in Ushuaia and were headed to Colombia.  We warned them about the van.  We didn’t see a tow truck or rescue vehicle heading to the van but I guess that they’ll work something out – that’s what you do in Patagonia.

That’s it, hook your safety vest over the bumper and head home – job done

We stopped near the top of the second climb for lunch and some nice views of the Rio Baker.  Thankfully, the third and forth hills were progressively easier and even though we were getting tired, we knew that we could make it at that point so it was just a matter of grunting it out.  We arrived in Cochrane at just past 3PM.  It was a hard, but satisfying day on the Carretera Austral.

Rio Baker with road above

And a second guanaco

Another view of the Rio Baker – further downstream now

In Cochrane we found a small but well equipped cabana right in the centre of town.  It has a brew pub and grocery store just across the street so we should be able to replenish both carbohydrates and food stocks while we are here.  We are taking another day off as we really need to make sure we are well supplied and in top working order as the next week is probably the most remote and challenging  of the entire trip.  I’m nervous, Nancy says “bring it on.” (Senior editor’s note – hahaha very funny Dave, and quit complaining about the oatmeal you will be carrying). 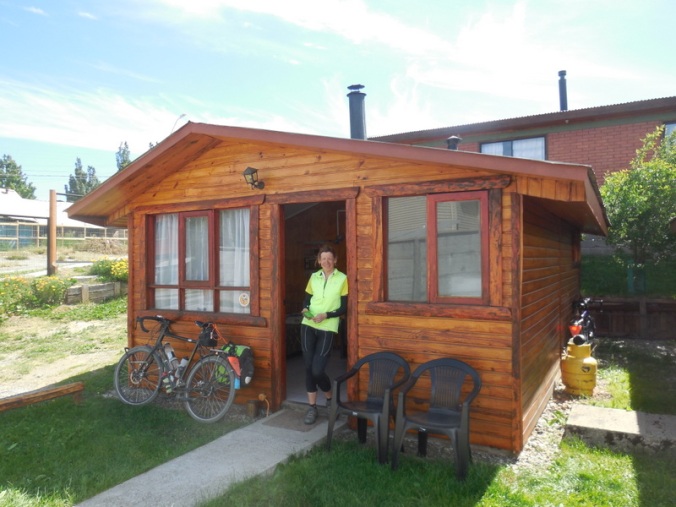