It was very quiet in our little forest hut overnight.  We could hear the wind from time to time, but there was never any rain.  I was pretty sure that the roof would not leak but I was also more than happy not to test things.  We were up before the alarm, having been in bed before 8:30 last night.  We left camp about 8AM, our normal time.

Without planning it, we stayed for free at the campground as the ranger apparently only comes once a day to collect fees and we understand that this is at about 8:30 in the morning.  There is no box or alternative way of paying.  I never feel great about this because even though the fees are small, when users don’t pay user fees, then things don’t get fixed and maintained.  We certainly can afford to pay and wouldn’t think of doing a runner.  But we didn’t feel like hanging around either, as you never really know what time (or if) the ranger might show.

To start the day, we had an 8k downhill, followed by a 14k uphill.  The downhill was pretty chilly and we were both more than happy to start going back up.  We had clouds this morning but the views of Cerro Castillo were not an issue because for the first 25k, you can’t see out of the narrow canyon that the road follows.  Even without direct Cerro Castillo views we had some nice mountain photos all the same. 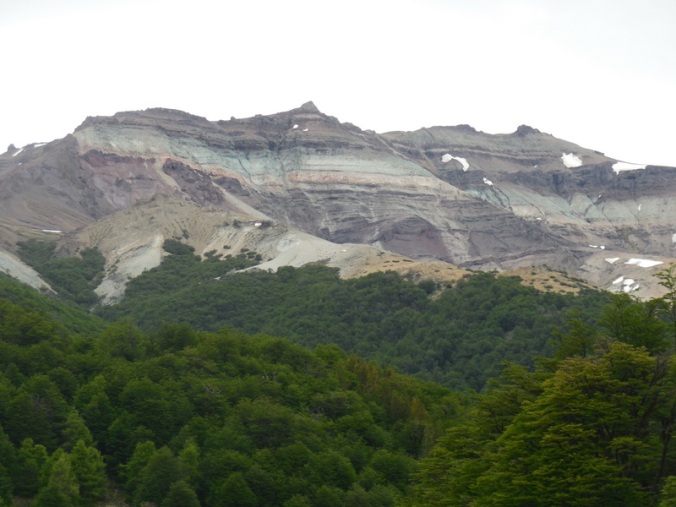 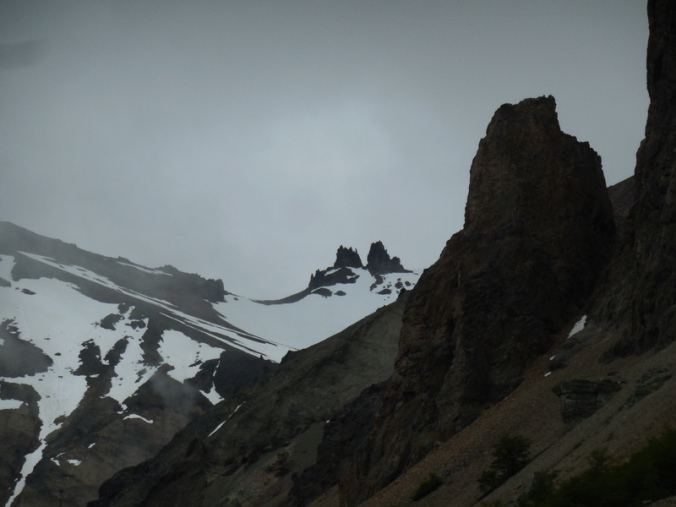 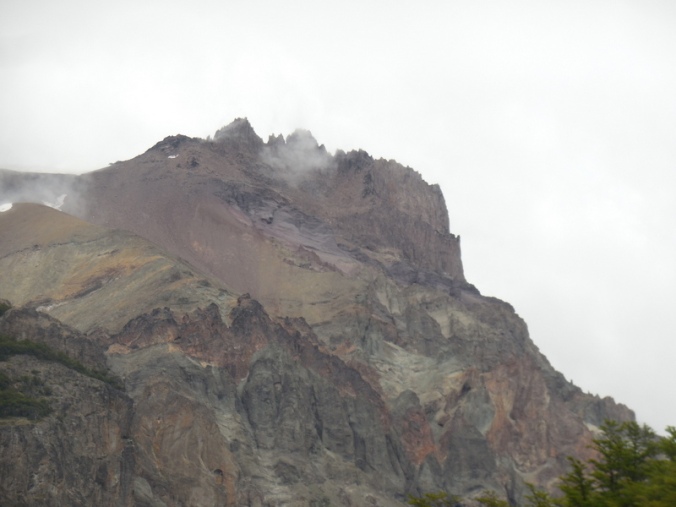 Just after the top of the pass on the downhill, you come across a nice set of photogenic switchbacks.  We’ve seen much grander in the high passes in the Andes but these particular switchbacks are sort of an iconic photo that you see in everyone’s blog who travels the CA.  We stopped and enjoyed the view – and took photos.  From the switchbacks it was a fast 13k to Villa Cerro Castillo where we stopped at a “two bus” cafe – sort of like the one we stopped at the other day, but this time there were two buses connected to each other, one for cooking and one for sitting.  It was warm inside so we decided to call it a second brekkie. 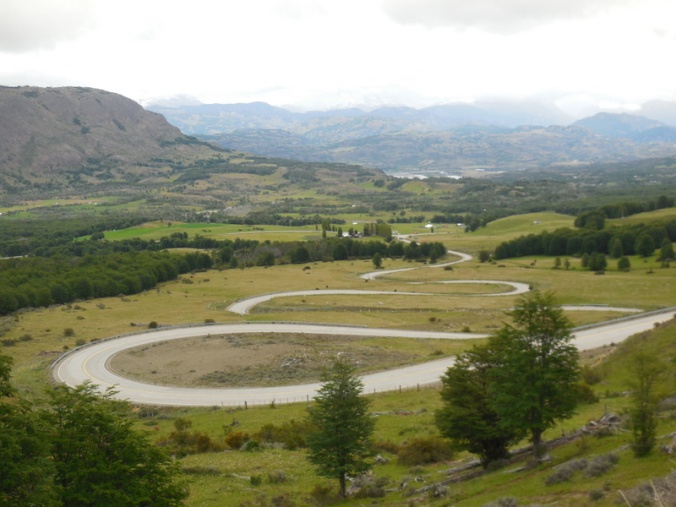 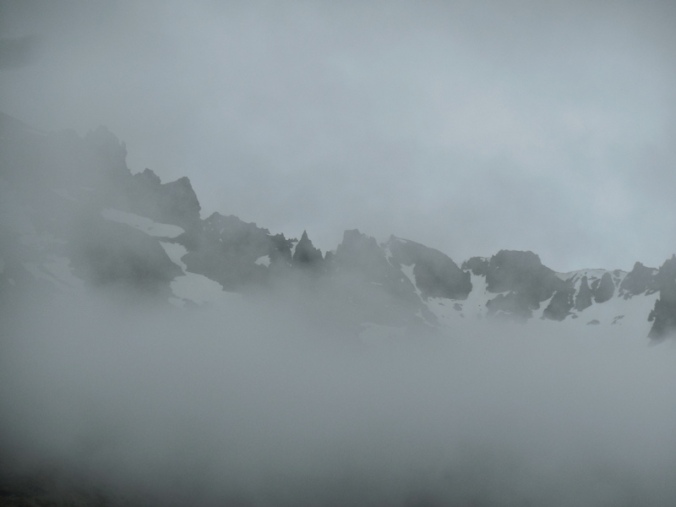 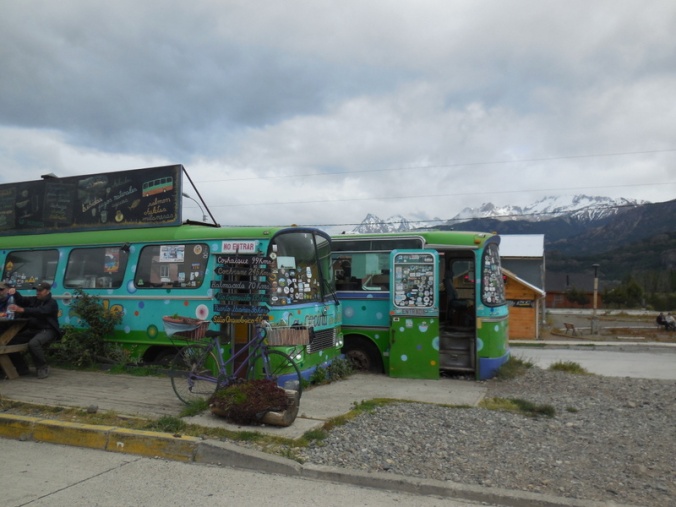 While in the bus, Adrian the skateboarder and Joe and Sarah from the UK popped in.  There were a couple Chilean guys and a nice woman from Canada in the bus as well.  We sort of got the rock star treatment from the Chileans and Canadian, until Adrian showed up.  I mean, our trip seems “crazy” until you meet a guy doing our trip on a skateboard!

We lingered in the bus for quite a while as it was cold and windy outside and we weren’t in a hurry to get back out in it.  Joe and Sarah left before us by at least 30 minutes but we caught them within 100 metres – at a stop light for road construction.  They had to wait 30 minutes for the signal to change, we didn’t wait at all – sometimes you’re lucky.  On this section of road, you should get nice views of Cerro Castillo – but we only got cloud filtered views because of the storms.  We heard that the views yesterday were great.  I guess we’ll just have to come back another time – from what we saw, it looks like an amazing mountain. 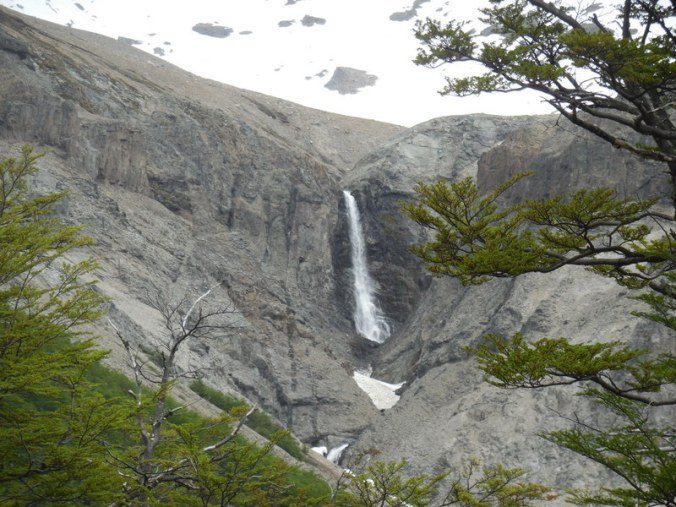 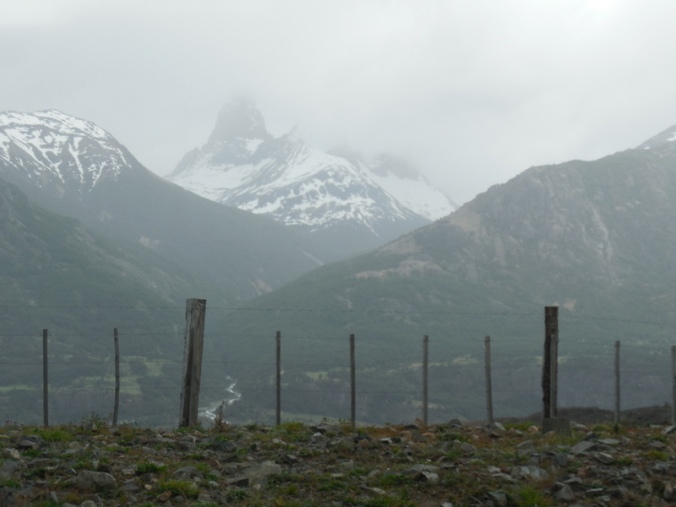 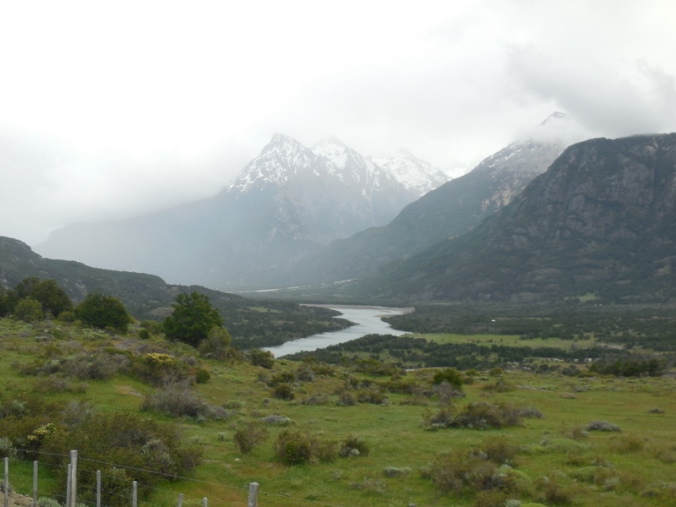 Looking up towards the peak

There was another German couple riding south as well as Joe and Sarah and us.  The six of us hop scotched each other for the next 10k until we pulled off at our planned stop.  The others were going continuing today as they only started in Villa Cerro Castillo this morning.  The CA used to be all unsealed from Villa Cerro Castillo but they are now slowly paving it.  Where it was paved, it was great.  Where they are getting ready to pave, it was a bit of a mess with loose gravel and bigger rocks.  It was hard to ride at times but we got through without issues.  We have new pavement in front of our campsite so I’m sure we’ll get some more good and bad stuff tomorrow – but that’s tomorrow. 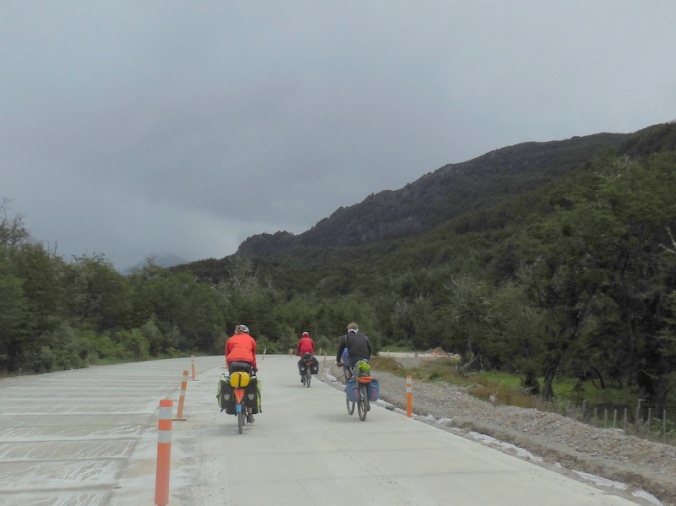 Riders in the storm – on the new paved road, smooth here at least

We stopped at Los Nires Camping for the night.  It is basically a home in remote Patagonia where the owners decided to put up a few huts and offer a resting point for travellers.  There was no one home and a locked gate when we arrived but we’ve read that they don’t mind people letting themselves in.  We worked our way around the gate, moving a couple of logs, hoping that they wouldn’t mind.  It is now 3 hours later and we’re all set-up in one their shelters and still no one has come home.  There is some risk that we’ll get turfed out but we certainly hope not.  The weather today was iffy but we never did get rained on.  We had some really strong headwinds at times and right now it is blowing pretty hard from the direction we were travelling.  Our shelter faces away from the wind so we are more or less out of the elements.

Two days ago, today was forecast as the worst day in a week.  We haven’t had a network connection for 48 hours so we can’t check to see if the forecast holds.  And we are in Patagonia, so you never know.  Tomorrow we have about 70k to ride and who knows what we’ll see with the weather.  We ride due west for the first 45k and that’s where the wind comes from in storms, and where it is coming from now.  Perhaps the storm will blow through and we’ll be cruising – we can always hope.