We got rained on!  Stop the presses.  Last night at camp, we had about 20 drops on the tent, creating a flurry of “get everything under cover”.  Then the rain stopped.  It rained several times overnight, at about the same level.  Then today riding we had about 1 minute of rain.  Ok, that’s not much rain but it seemed like a lot to us.  We can’t remember the last time we had rain, maybe in Peru, not sure.

This afternoon once we were at our hostel, bikes safely tucked away, it rained pretty hard.  In fact, it has rained quite hard several times this afternoon.  Forecast for the next 4-5 days is no rain.  Almost perfect really – rain when we are in a hostel, clear up and let us ride rain free.  We like it…

But back to the day, or rather, last night.  Our busy campground, complete with yabos doing burnouts on the lakeshore and loud music, turned out to be a complete ghost town overnight.  Every single car, trailer and truck left before dark and we were 100% on our own.  It was kind of freaky but we liked the quiet.  And for the record, the hot water never came on in the shower block.  Nor did they bother to change the promised 6:30 hot water on their sign to some other time.  I mean, after all, who are they going to piss off but two lonely bicycle tourists?  Campgrounds like the one we stayed in last night don’t have Tripadvisor pages or websites where you can offer reviews.  Actually, it really wasn’t too bad but a hot shower would have been nice.

As we were lying in the tent this morning, waiting for the alarm to go off, we had one of those 20 drop rain spells.  This got us moving but since it stopped right away, we had a normal speed brekkie.  That is until just about 10 minutes to 8AM when a real cold wind started to blow in from the north.  You could tell that more rain was coming and we didn’t linger much longer and wait for it.  We rode just fast enough all day as to keep ahead of the rain, except for the little spell I mentioned, only 5k from the finish.

We had to ride Ruta 66 again today.  We could see it from camp and it seemed to have a lot of trucks but overall, it was not too bad.  We were only on it for 15k then we turned off onto mostly quiet farm roads again today.  There are lots of crops – today we saw orange groves, strawberries, artichokes, grapes, cherry trees, nut trees and lots of winter wheat.  We only saw a couple farm stands and didn’t see any on Ruta 66 – the Ruta de Fruta. 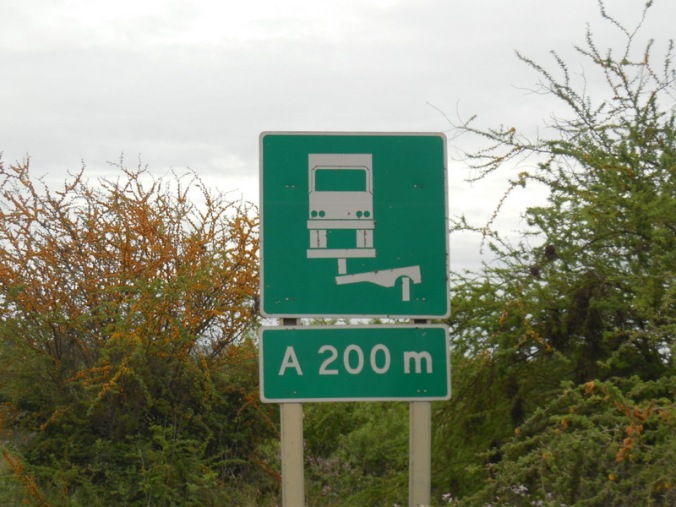 Can’t figure out the oranges – these have fresh rows cut, oranges on the ground and in the tree – not sure when harvest is…

We stopped for morning tea at another small berg with only one store.  We struggle to find things at these places that we want to eat so today we tried some new things.  I had a sports drink called “Woman Plus”.  It was ok and even though my voice cracked after the first sip when Nancy asked me how it was.  We also tried some “Tony the Tiger yogurt”.  I know, the shame.  It was ok, if not just a wee bit sweet.  Nancy had trouble getting all the flakes out of the flake side of the container until I pointed out to her that the container bends and they slide out.  I think that she maybe should have had the “Woman Plus” drink instead of me!

Woman Plus sport drink – I’m not sure that the world needed these, but there you go

My body is a temple, I don’t eat this stuff

I guess one won’t kill me…

We stopped for a coffee on the way into town and got to really nice flatwhites, just around the corner from our hostel.  We are staying tonight at a nice hostel, the Casa Suiza.  It is only 10 months old and being run by a young Swiss and Canadian couple.  The Swiss fellow was (is?) also a touring cyclists and best of all, get what we are doing.  We know a couple folks that have stayed here – it is so nice to have scouts ahead of us.

Flatwhite and an alfajor – hard to beat that combo

We know other cycle tourist who’ve stopped here as well

After getting cleaned up we headed out for an early dinner and trip to the hardware store.  The later was to buy parts to build Nancy a new kick stand for her bike.  She broke/wore out her second stand of the trip yesterday and we know that we won’t find a new one between here and the bottom.  Truth be told, we’ve both been lucky to get as many days out of our stands as we have.  They are both rated up to 25k and both are bikes weigh well over twice that – perhaps three times that when we are loaded with lots of food and water.  We found all the parts we need to make a new kick stand – I’ll post photos of the stand tomorrow, assuming that it works. 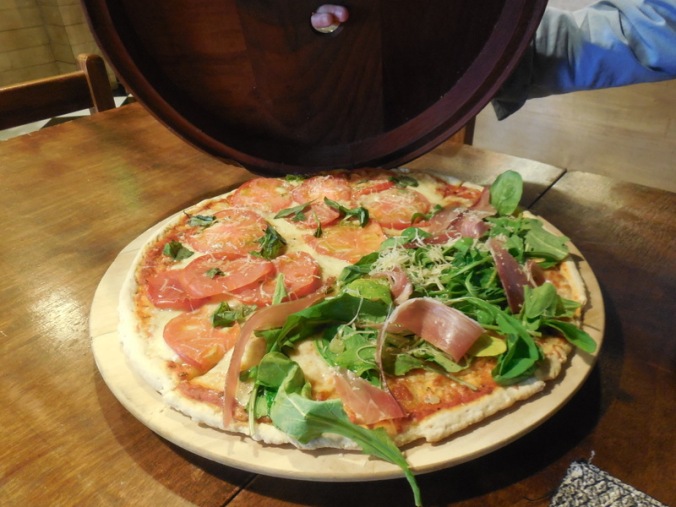 Lid off – a pizza with rocket – yum

And a nice local drop

Dinner was successful as well.  We found a popular pizza joint/bar that the owners of our hostel told us was a happening place.  We had a great pizza, one of the best in South America so far.  We also got to try out one of the local wine drops – not too bad as well.

We had no idea how many wine regions that Chile had before doing this trip – see map below.  We are currently in Valle de Cochugua – Santa Cruz.  There are so many wine regions that it’s almost impossible to know where to start.  But also there are enough that you don’t feel like you have to stop at every one.  Having said that, we missed a couple wineries today racing the rain into town.  Soooo, tomorrow we are taking a rest day and hitting a wine tour of some kind.  If we rush southward, we’ll reach southern Chile while it is too cold and of course, someone has to validate at least part of the wine map for all of our wine drinking friends.

Last Blue Moon we had was at the end of the Casear Highway – Thanks Andy!