Last night, as expected, our neighbours kicked on with the karaoke machine.  But honestly, they didn’t have the volume overly loaded and they seemed to tire pretty quickly.  This morning I had vivid memories of a really bad falsetto rendition of the Bee Gees “More than a Woman” rattling through my head but that may have even been self-induced dream.  Nancy didn’t hear anything.  Overall, you’d have to give the fellow campers at least a passing mark with regard to being considerate.

The campground dogs found us again this morning. They befriended us last night but seemed to lose interest when we didn’t feed them.  This morning, they returned for one more chance to be fed.  No food was forthcoming but Nancy did pet a couple of them – putting her in the “friends for life” category.  We were lucky to escape when they took interest in the small female dog that the neighbours had – if breeding had been possible, the combination of large camp dog and the mini dog-like creature would have been interesting.  We didn’t stick around to see how things worked out. 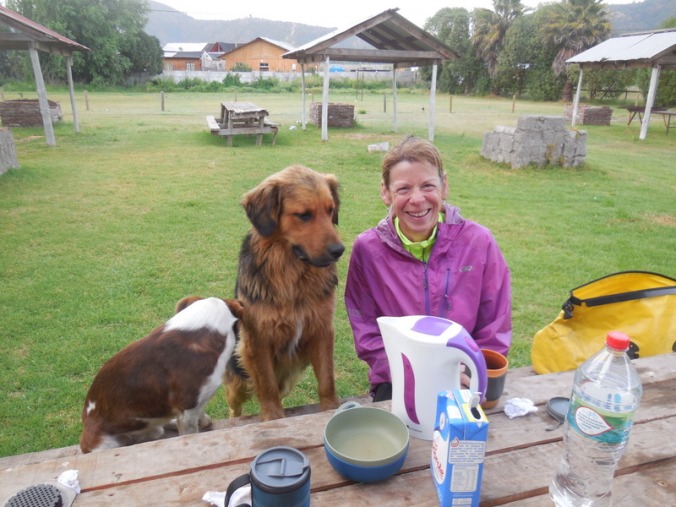 We had a lot of traffic on Ruta 66 yesterday afternoon and hoped that Sunday morning would be a lot quieter.  It was, but only a little and the traffic that was out all seemed to be in a real hurry.  So, after only 2k, we pulled over to re-think the entire route for the day.  There was an alternative road, Ruta 660-G that was only 1k longer and looked on the map at least, perhaps being quieter.  Ruta 66 is the Ruta de Fruta – and it had been a road we wanted to ride but skinny shoulders and fast traffic ruled it out.

We were really happy with our change.  Of course, we didn’t see the part of Ruta 66 that we missed but Ruta 660-G turned out to be a great choice.  It was a nice quiet farm road that took us through a bunch of orchards and vineyards.  It also had brand new pavement – which was a real bonus.  There was one really steep switch-backed climb on 660-G, and by steep, I’m talking 16% maximum grade and sustained 10% grades.  The climb, however, was only 2k long and probably the reason the road was so quiet – it would have been slow in a car – so it worked out for us. 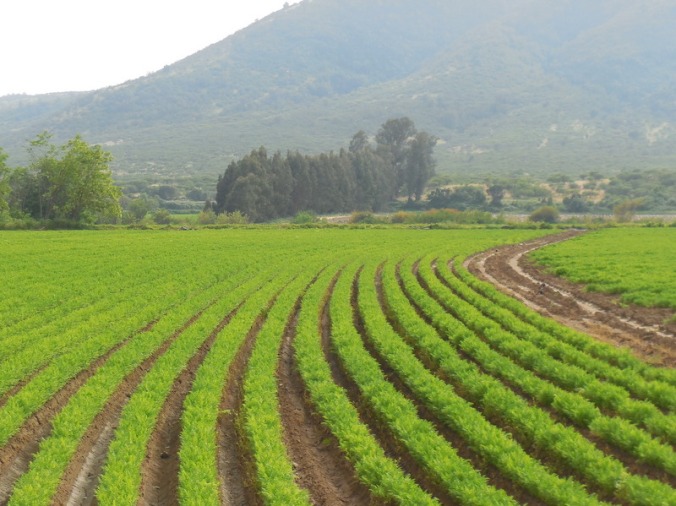 Pretty sure this was carrots 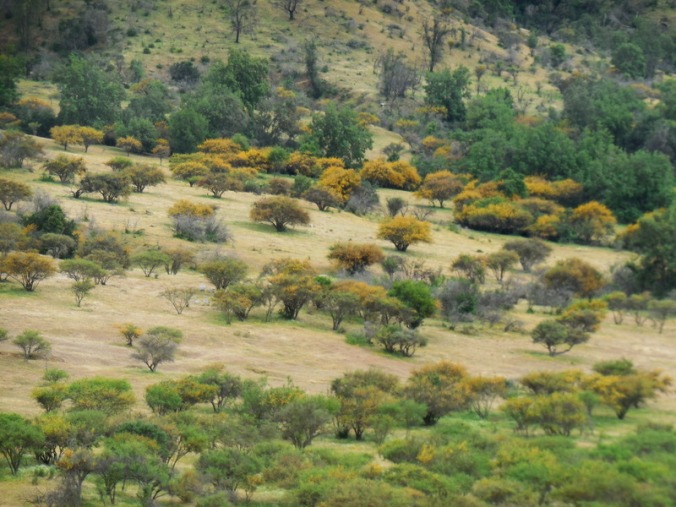 Side hill as we climbed

Looking back down the climb 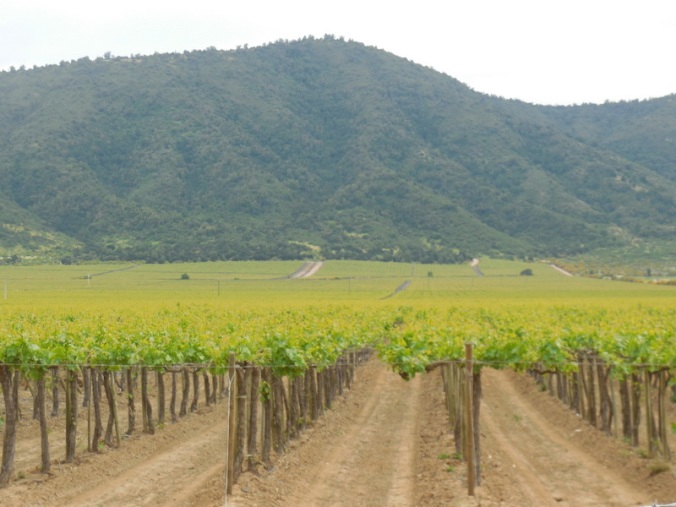 Lots of vines out here

The steep uphill was followed by a steep downhill.  On the downhill side we stopped for morning tea in the very small berg of Chacon.  There was only one small tienda there but we stopped and managed to find a packaged cake and fruit juice.  Both cake and juice were probably overly sugary for us but the owner of the tienda was a funny old guy who turned out to be very friendly.  He was keen to talk to us but didn’t know where to start.  Nancy and I took turns coming up with topics to discuss with him.  Of course, Nancy and I talked to each other in English, and conversations with the owner were in Spanish.  It worked out fun for all.  I’m pretty sure he never got that Nancy and I were talking about what to talk about next.

Enganchen indeed – whatever they call it, we like it!

The sign in back said exactly the same as the one in front – they were just too something to repaint, repair or even remove the back sign when they put the new one up – funny 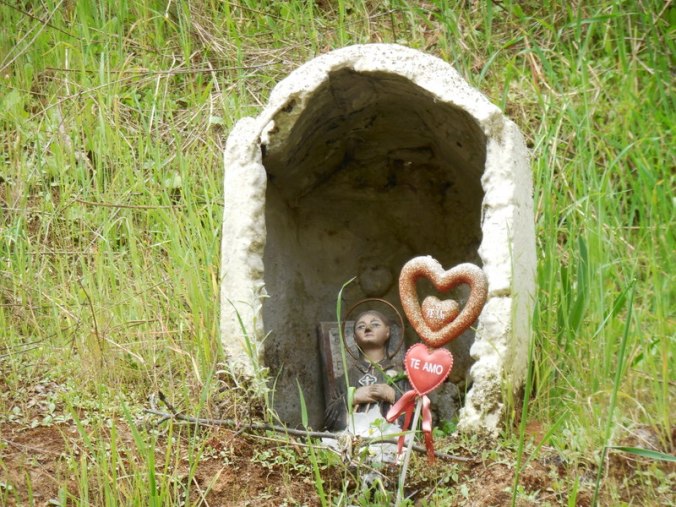 I love you – roadside shrine

After tea we had a few K to ride before re-joining with Ruta 66 and our original route of the day.  Ruta 66 was the same deal as above, lots more traffic and not much of a shoulder.  We were now doubly glad of our re-route.  After about 10k on 66 we reached Lago Rapel (Lake Rapel) where we had a few campgrounds identified.  It took us awhile to settle on a campground but that’s one of the nice things about a shorter day; we have time to look around.  We’ve eventually landed at Camping Melipilla where the water views and our site are nice.  We were overcharged based on what we’ve heard from travellers ahead of us but we were sort of tired of looking and it really is the best of a fairly rough-looking set of campgrounds. 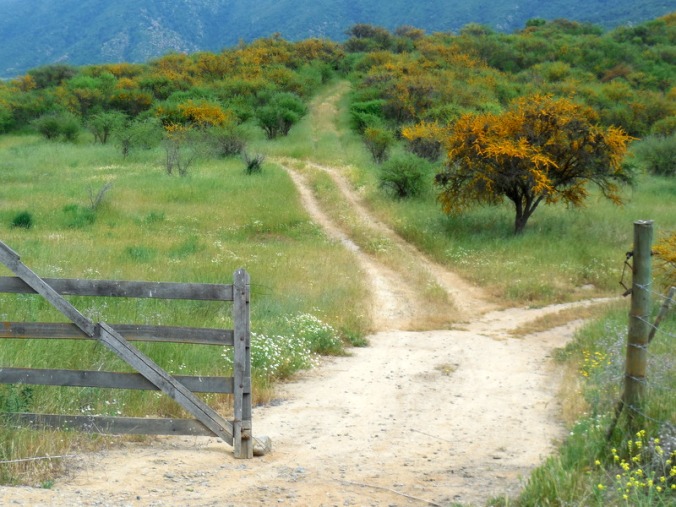 We pitched our tent at the last day use site, not in the camping area.  The rules here appear to be pretty lax so we are hoping to not be asked to move.  A group of young kids with booming car stereos came in this afternoon and have driven down onto the beach right in front of where we would have camped had we followed the rules.  We are holding out that our “complete lack” of any Spanish will be a good defence if we get asked to move – we’ll just smile a lot and say “yes, yes, we move in the morning, first thing, yes, yes.  No wait, that makes me sound like an Eastern European who doesn’t speak English.  I need to sound like and Aussie who doesn’t speak Spanish – better work on that.

No wait, what language do we not speak…

For the record, the showers were cold again today (two nights in a row) but we got showers so that’s a bonus.  There is a sign on the bathroom door here that says that there is hot water after 6:30 tonight.  We didn’t want to wait and were not sure if that was one of those “free beer tomorrow” like signs.  I may just head back up to the bathrooms at 6:30 to see if they’ve written in a new time for the hot water – gotcha!

We are off tomorrow for Santa Cruz – there is supposed to be a nice hostel there, and maybe a chance to try some of the wines from that region.  We’ll be on the Ruta de Fruta for about 15k, it will be interesting to see if traffic is better or worse on a weekday.  We are still looking for our first fruit stand but perhaps it’s a little early still for that.