We were up relatively early this morning to try to get out of Valparaiso before the morning rush hour traffic got too bad.  Well, maybe not as early as Dave wanted, since I was in charge of setting the alarm last night – actually I only gave us an extra 15 minutes, so it really didn’t change much.  Even with our extra 15 minutes we were on the road before 8am, zooming down the steep hill from our AirBnB to the flat area of Valparaiso.  Apparently we weren’t zooming enough for the cars behind us as we got a few hurry up honks on the way down.  We ignored them as safety was our primary concern.

We had to backtrack a bit through the city, heading back from where we came into the city to catch Ruta 68.  We had heard that bikes might not be allowed on this highway but it was really the only way to get out of city, heading east toward our destination today.  Actually this highway and Ruta 60, a similar highway that runs east on the south end of the city, are the only ways to get out of the city for bikes.  We have heard multiple stories of cyclists trying to take shortcuts up through the hills of Valparaiso only to be turned back by locals telling them they should not go any further as it was very dangerous.  In fact Simon, the fellow from Perth WA that we met the other day, had just that happen to him the day he left Valparaiso – after gestures of knife to the throat and gun to the head he had to turn around and take one of the highways out of the city.

With all that info, we happily headed straight to Ruta 68 and decided we’d simply tell any policeman who stopped us that we didn’t want the ‘knife to the throat’ thing to happen to us so we’d be staying on Ruta 68, thanks.  It actually turned out fine – we did not see any signs saying ‘No bicycles’ and the shoulder wasn’t bad once we got out of the city proper.  Once we got to the top of the hills above Valparaiso Ruta 68 seemed to get quite a bit busier, with quite a few villages along the way adding the stress of exits and entries onto the highway.  It wasn’t too pleasant, so we decided to take an alternative route that started in the village of Placilla. 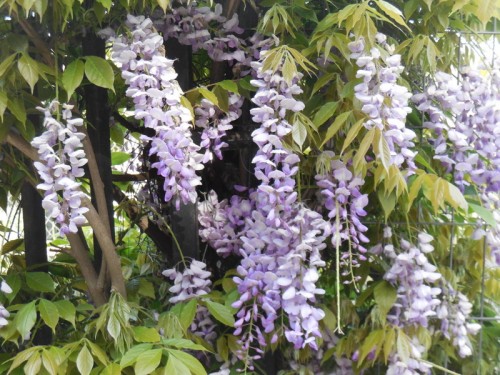 Seen on the climb – spring is here in Chile

All was going well on the alternative route until we made a slight wrong turn and ended up making a nice circle tour of the village of Placilla and ending back up on the highway that we had recently exited.  Now, to be clear here Dave looked at the map on my phone and his phone and agreed on the right turn (which should have been a left turn).  And when we stopped a bit further down the road to check the map (to make that clear, it was me who stopped to say ‘this doesn’t quite feel right, let’s stop and check the map’) he agreed we should keep going.  So keep going we did, shortly coming to an entry back to the highway.  Hmm, I thought we were trying to stay off the highway.  Not having any other option, we rode on to the highway.  Not quite sure where this was heading yet, we saw an exit to Ruta 68 – hmm, again.  Then, sure enough we saw the signs for the exit we had previously taken.  (Junior editor’s note:  I did check my phone, guilty – but honestly, having both of check maps at every stop is overkill – General Patton once said: “lead, follow, or get the heck out of the way”.  Today, Nancy was in charge of navigation.  Actually, it was not all that much of a loop and we were both laughing – these things happen, thankfully not that often – haha).

Obviously, this was a sign that we needed another coffee.  So we pulled off into the frontage road and stopped at a service station to have some coffee and sweet rolls to get our caffeine and sugar levels back up.  After looking at the maps again we figured out a way to get on to the alternative road from there, with very few turns, which would take us all of the way to our intended destination of Casablanca.  So off we went again, to try to get out of the village of Placilla for the second time.

The alternative road was great – nice and quiet, lined with orange poppies and gum trees and with very little traffic.  Dave was feeling artsy so we had to stop for pictures several times.  We didn’t really have any time pressure at that point, as we had given up on the idea of going beyond Casablanca.

Poppies and flax (I think) 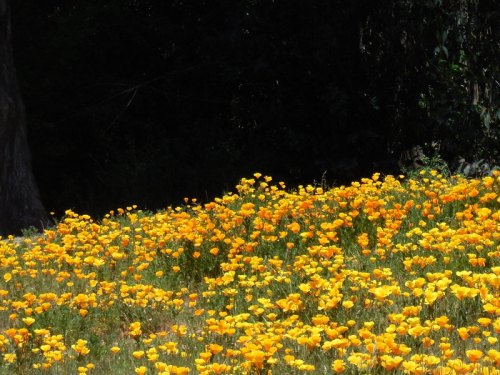 Poppies on the edge of a dark forrest

We stopped for an empanada break about 7 kilometres outside of Casablanca.  We only had a cheese one each – they are so big here compared to Argentina that it’s hard to eat more than one.  Then it was a short ride into Casablanca, where we checked out the Residencial del Valle, a small hotel that our touring friends Manja and Martin had stayed at a few weeks earlier.  The place is nice and small (and clean), and we got a ground floor room with multiple beds and a shared bathroom for ARS20,000 – not a bad deal here in Chile. 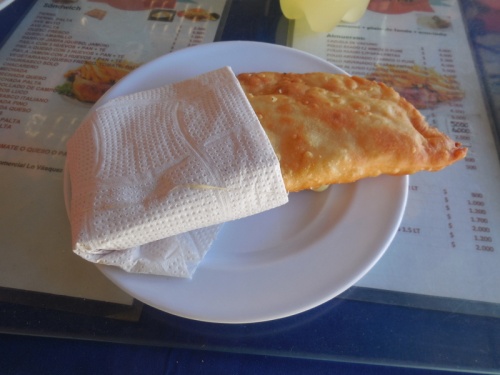 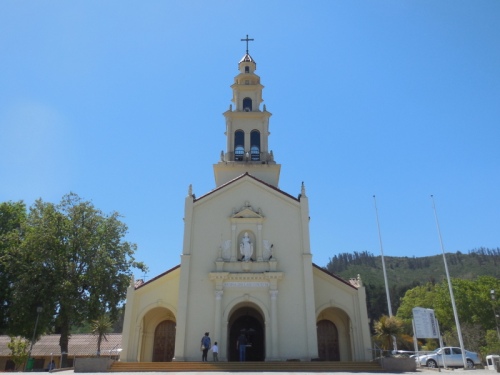 Church in the small town 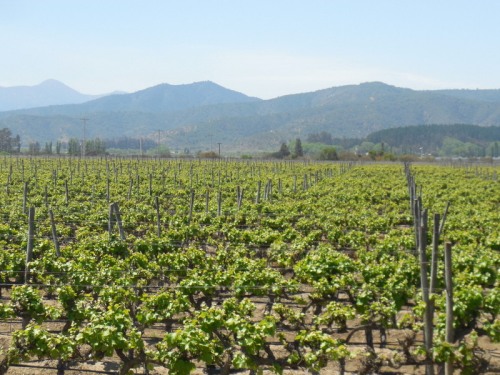 After getting cleaned up we headed out to a nice restaurant a bit out of town for a very good meal and a nice glass of wine – kind of a very late and large lunch, so no dinner needed.  Actually the son of the hotel owner and his wife were kind enough to give us a ride out there.  They both speak English so it was fun to have a chance to talk to some Chileanos about life here.  After our nice lunch/dinner we walked back to town to give the big meal a chance to digest, stopping at a nice little cafe for another juice to quench our thirst (okay, I had an iced coffee with ice-cream and lots of whipped cream, Dave had juice).

Nancy’s dinner – all the flowers were eaten 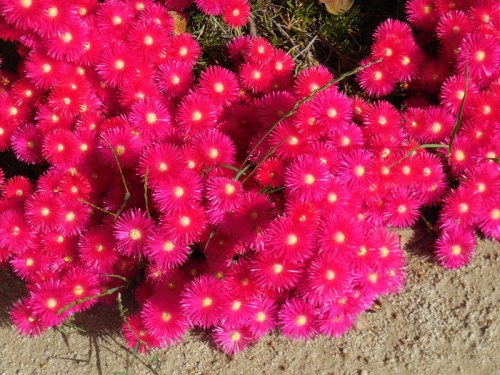 As we were sitting on the front deck of the hotel another couple of cyclists rolled up.  They have been riding for quite some time as well and we had fun chatting all things biking.  Now it is getting dark and almost time to head inside into our 4-bed room.  Tomorrow we have another relatively short day – around 65k or so, we think, unless we have to do some more backtracks….

This entry was posted in Americas trip, Chile. Bookmark the permalink.