We’ve spent the last couple days relaxing and being tourists in Valparaiso, Chile.  It’s a pretty interesting city with an eclectic edgy feel to it.  Until the Spanish arrived in 1536, the area was home several nomadic native populations that didn’t really have the need for a port or harbour, so they didn’t “settle” the area.  The Spanish used the natural harbour as a stopover point during the conquest but development was limited to a few houses, the odd workshop and a safe anchorage.

In 1810, a local merchant took a punt and built a proper pier.  This enabled Valparaiso to quickly grow into the largest port in South America.  Growth was spurred on by the Chile’s 1818 independence from Spain and by several gold rushes around the world that needed a port in this part of the world.  During this time, many immigrants arrived from Europe leaving lasting cultural impression on the city.  The opening of the Panama Canal in 1914, followed quickly by World War I and the great depression were all disastrous for the city.  Shipping traffic ground to a near halt and many of the residents moved away to find work elsewhere. 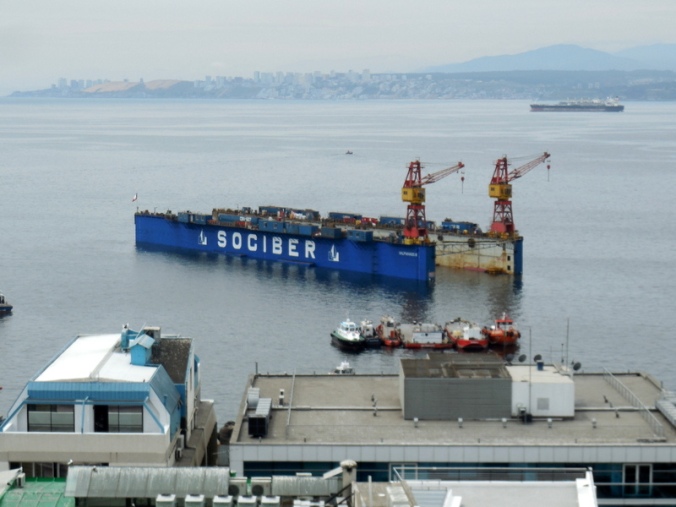 A floating dry dock awaits its next ship

Recovery of Valparaiso has been long and slow.  As Chile has grown, the port slowly recovered.  The old port and city areas gained world heritage listing in 2003, helping jump start a small tourism industry.  Growth and some of the eclectic feel have come from the 10 universities and vocational schools that made their home here as well.  Lastly there is a fairly strong “art” scene as well, starting with the lowly graffiti artists and moving to more sophisticated pursuit of poetry.  Valparaiso has been to the home to several world renowned poets.

Valparaiso has little flat land and is built up steep hillsides

Where the hills are really steep, they built vertical railways – we took a couple today 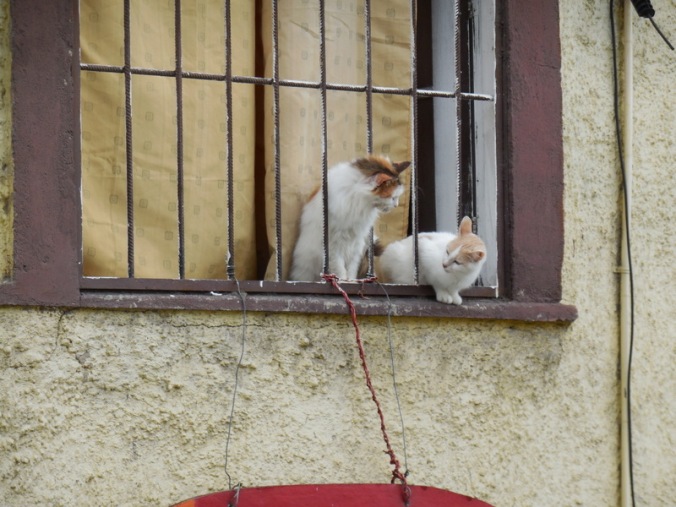 As for the graffiti, one could argue that it is a blight but here in Valparaiso they seem to embrace it.  We went on a city tour while here and learned that the really large murals are often commissioned (but the payment may only be to cover the cost of the supplies).  Most of what you see however is an artist or group of artists that are trying to build a name for themselves and has been done for free.  Surprisingly more often than not, the artists seek the permission of the building owner in advance.  Turns out that getting permission helps keep the art from being painted over.  There have been several sponsored graffiti festivals where neighbourhoods welcome artists to come in and create overnight tourist attractions.

On the full side of a building 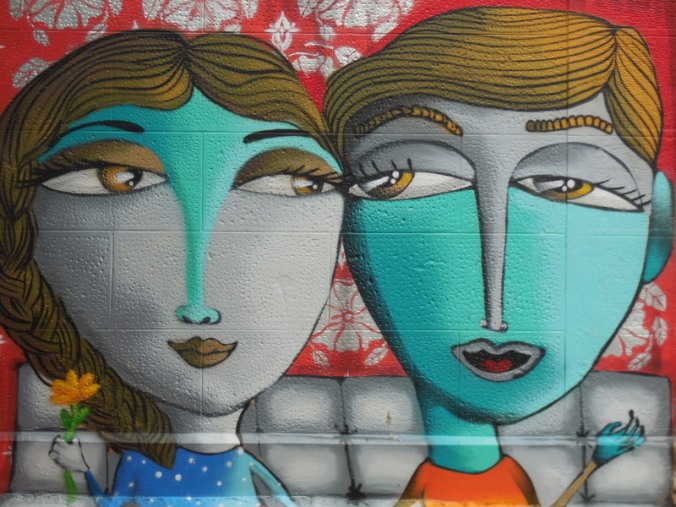 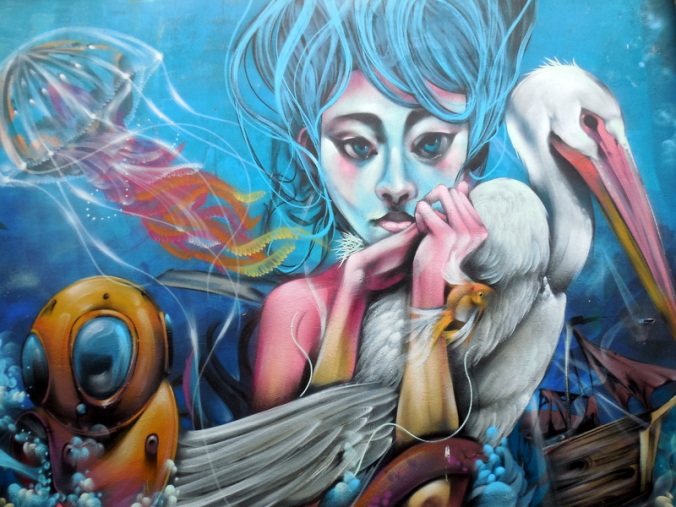 With a water theme 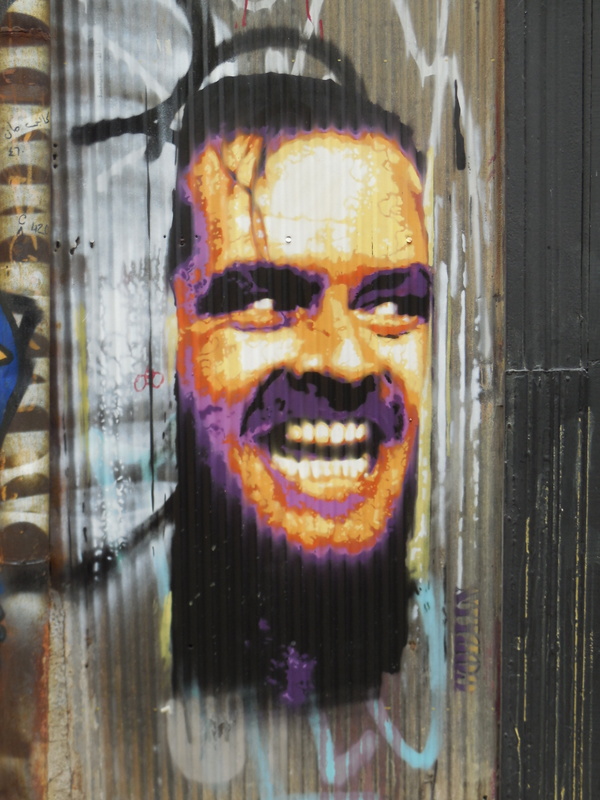 And a movie theme from the Shining

On the city tour we learned that the neighbourhood where we are staying (the port area) has sort of a no-go reputation.  Woops, we didn’t know that when we booked.  The guide was very careful to point out that this part of the city is perfectly safe.  Like anywhere in Latin America, get drunk and stumble down an dark alley at 3AM and bad things might happen to you.  He also made the point of telling us how the people living here tend to come from everywhere – or at least their parents and parent’s parents did – they are worldly and perhaps a little different than the rest of the city.  I think he said “don’t judge a book by its cover” and of course, don’t stay out drinking too late! 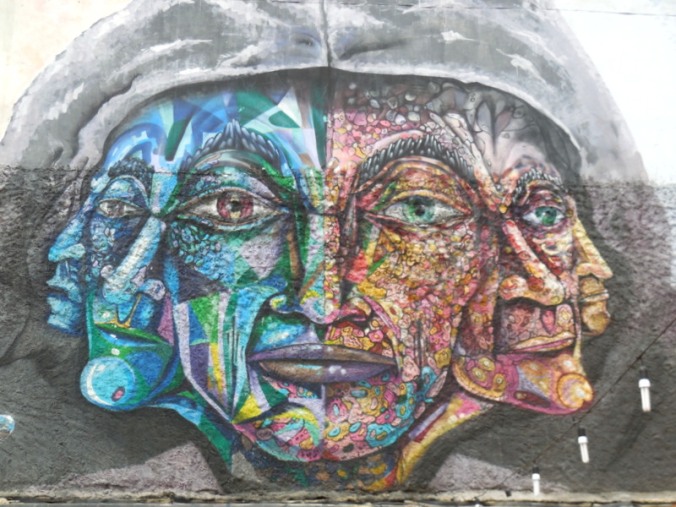 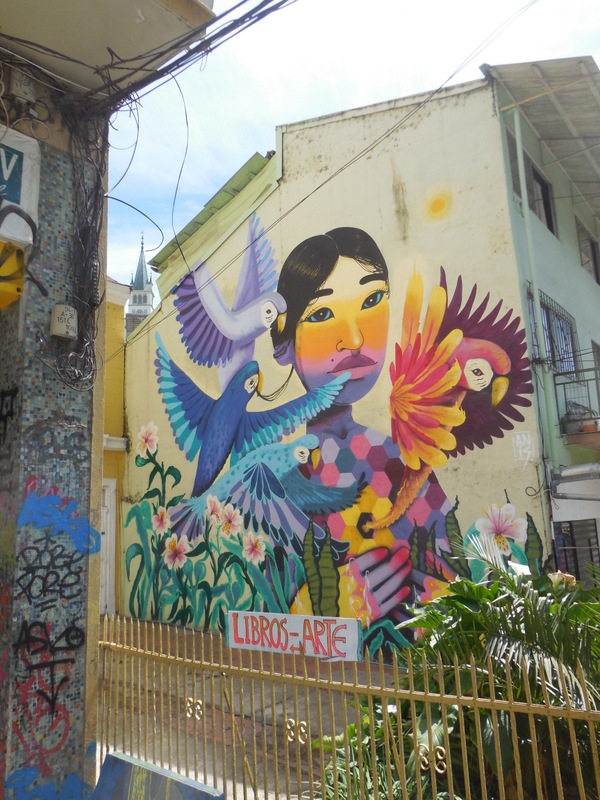 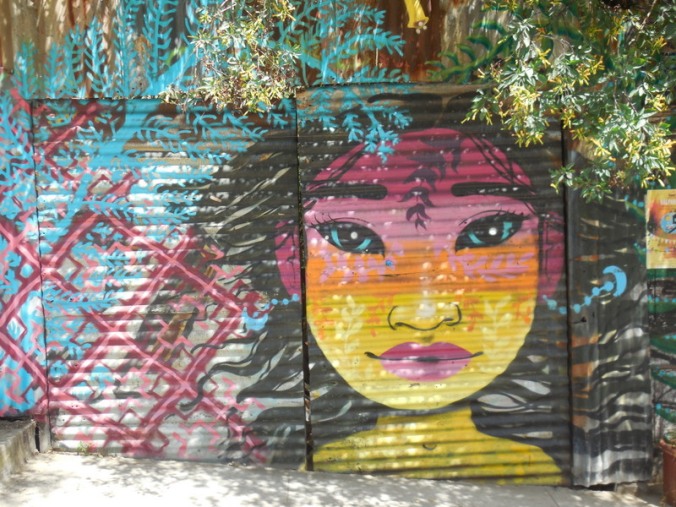 Blending in with the surrounding plants

Food is always a big focus for us and on rest days, we like to “see what’s famous” in whatever new town that we are in.  In the port area Valparaiso, the humble menu del dia (menu of the day) turns into a “seafood menu of the day”.  We had a great meal yesterday at one of the very local haunts – seafood paella and fried trout – both quite tasty.  And today I had an amazing Chupe del Mariscos (seafood stew).  We also enjoyed a visit to the most famous empanada restaurant in town, where they hand make to order over 80 different types of empanada.  The empanadas are a lot bigger here than in Argentina and more cheesy – we’ll need more research to determine which ones we prefer. 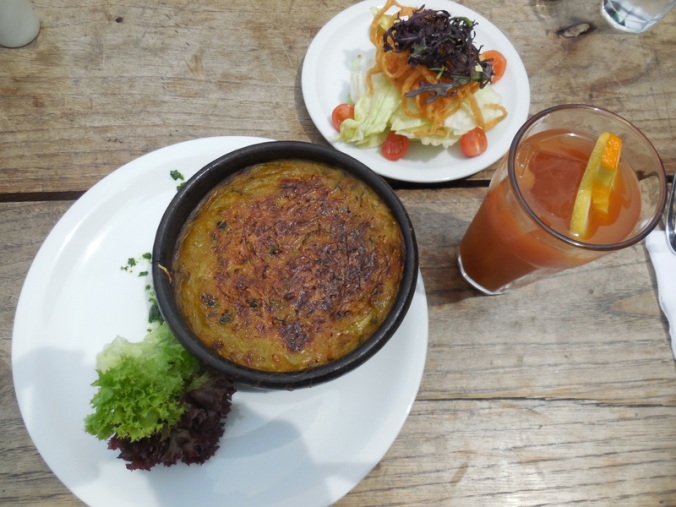 Chupe del Mariscos – wow it was good!  $6USD for everything you see here at a hilltop restaurant with a view of the entire city. 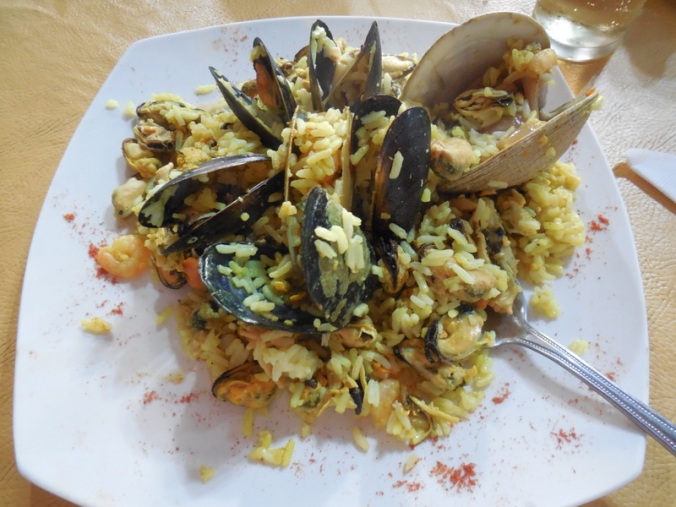 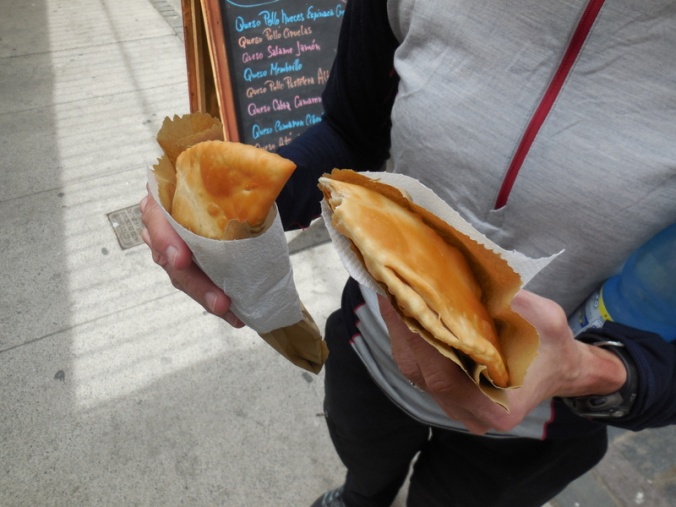 No Nancy, don’t bite it yet, I want a photo – oh heck, never mind

Tomorrow we “up stumps” and head south again.  We are skipping Santiago (too hard to get in and out of on bike and we’ve had enough of big cities for awhile).  We toyed with riding down the coast but are pretty sure it will be a little like Valparaiso – too much traffic and fairly hilly.  So instead, we’ll be working our way down the sort of central valley between the Andes and the sea – a route known as the fruit and wine route.  I’m sure we’ll give both a try at some point.

Eventually we’ll reach Puerto Montt and the start of the iconic Carretera Austral.  Nancy mapped out and counted all the remaining days we have left and it comes in at just under 50 days of riding.  Of course we won’t ride 50 days in a row, but we can certainly smell the barn now.  We hope to finish around the middle of January, going slow enough as to not get too far south before it warms up a bit.