After three days of climbing, we are getting close to the top of Paso Los Libertadores, the border pass between Argentina and Chile. We stopped today as planned at a ski hill that is about 22k from the pass.  By the time we stopped around 1:30, the wind was howling down off the mountain, right in our faces.

But I’m getting ahead of myself, back to this morning…  We left our little A-frame cabana about 8AM this morning.  It was a good place for a stop.  Though it was a little odd that we were the only guests and the gate to the compound was locked with a chain and padlock.  We had to unlock it to get out, and then re-chain it after we exited.  It was very quiet overnight, it was definitely not an overly social stop, but the cabana was nice and well equipped.

We rode the 1k back to town and were soon out on Ruta 7 heading west towards the pass.  The clouds that obscured the mountains near town yesterday arvo were all gone this morning – we rode in brilliant blue skies with wonderful, ever-changing views of the Andes.  The light was great so I stopped and took a lot of photos.  Almost too many but not so many as to elicit a “too many photos” comment from my senior editor.  After my seventh stop, I was informed that it was my seventh stop.  Past experience tells me that a comment that includes a numeric count of photo stops will soon be followed by a “too many photos” comment, so I eased off a little with the camera from that point. 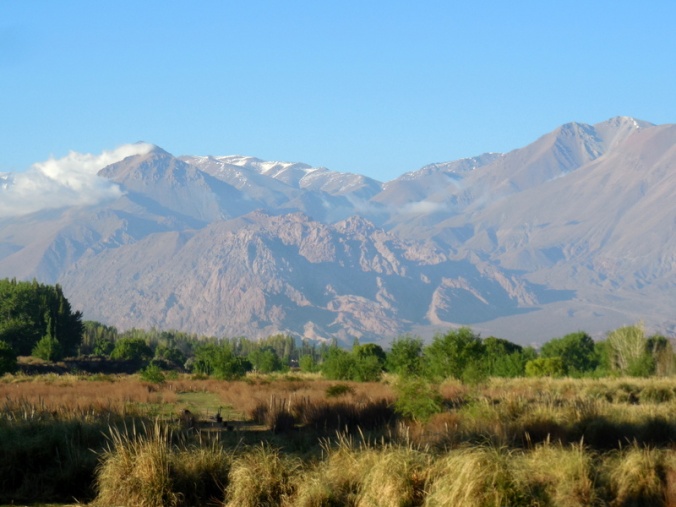 Andes foothills in the morning 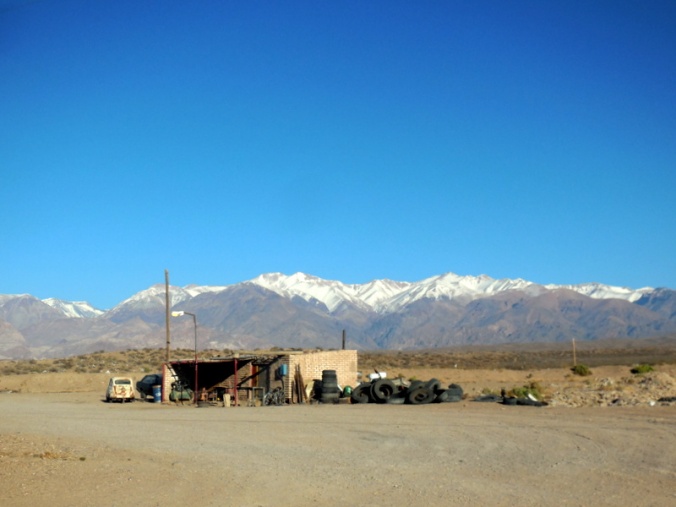 Tire shop with a view 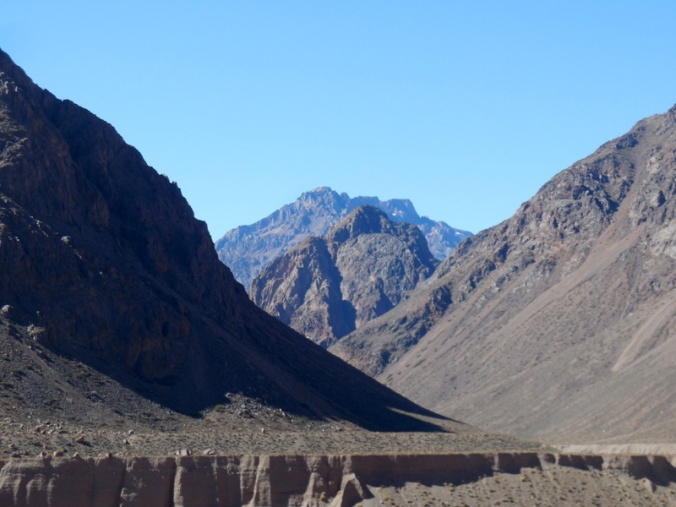 Morning in the Andes 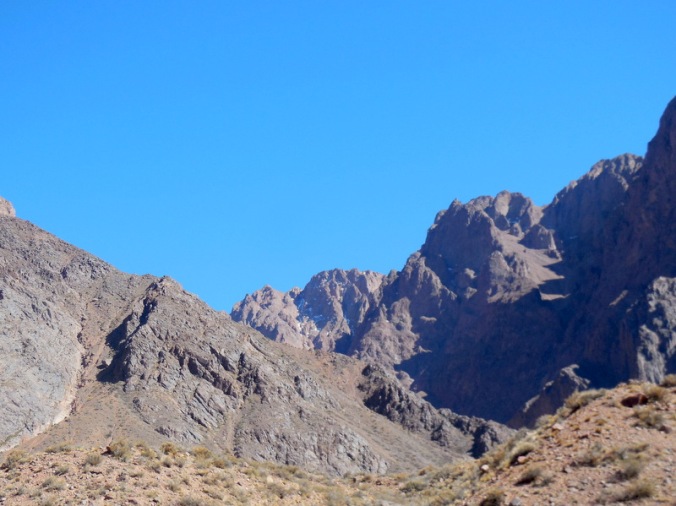 We rode alongside the Mendoza River again today but this far up the mountain, the flow was much less.  We can’t quite figure out why so early in the spring it is not going gangbusters.  Perhaps the real snow melt has not started yet.  This far up the canyon, it was very red with lots of sediment – also a bit odd as downriver yesterday, it was much clearer.  We thought we might see some mines up here with all the red water but having reached the snow line this afternoon, I think the red is just from the hills.  I don’t think we’ll see any mines riding up to the pass tomorrow. 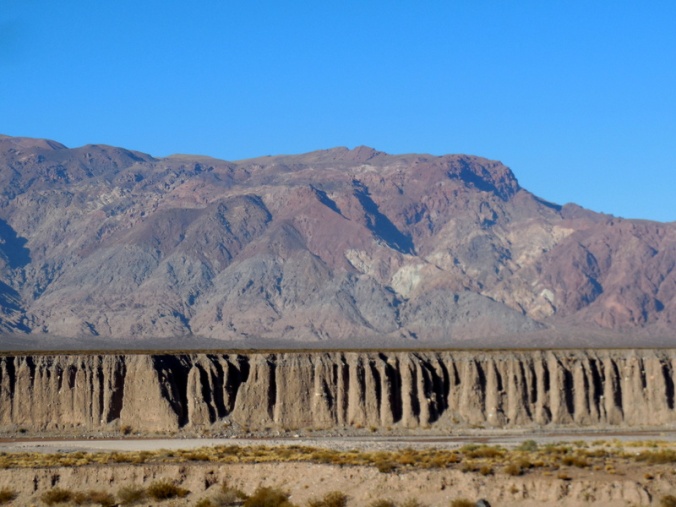 Mendoza River in the foreground 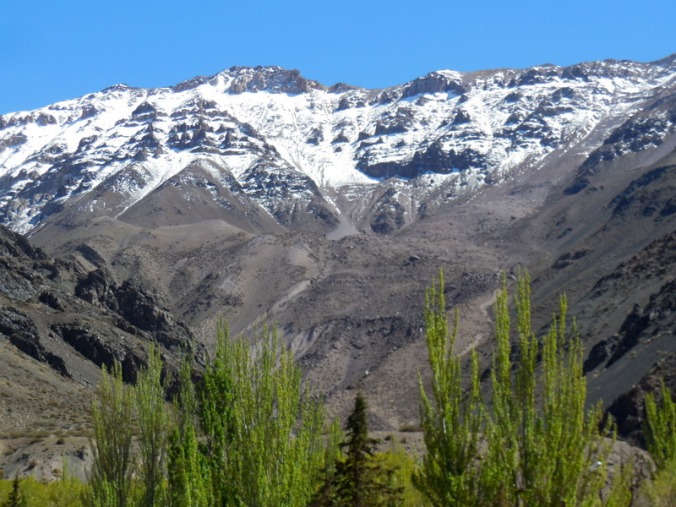 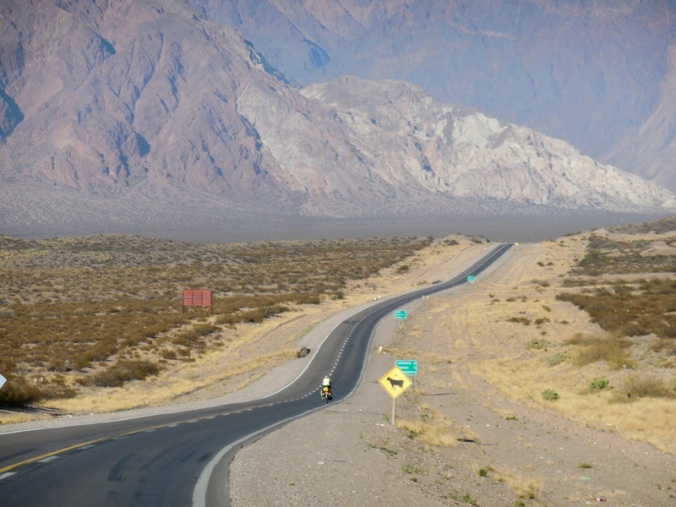 Heading for the hills 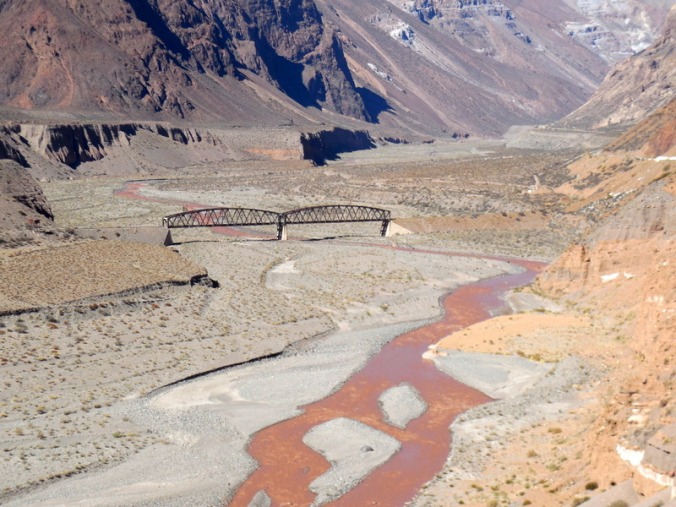 We had a tailwind until about 10:30 when we reached a narrower part of the canyon and suddenly we had wind on the nose.  The wind stayed this way the rest of the day, getting quite strong in the afternoon.  We stopped for lunch at an abandoned building in Punta de Vacas – even on the lee side of the building, we had to hang on to our lunch fixings to keep them from blowing back to Mendoza. 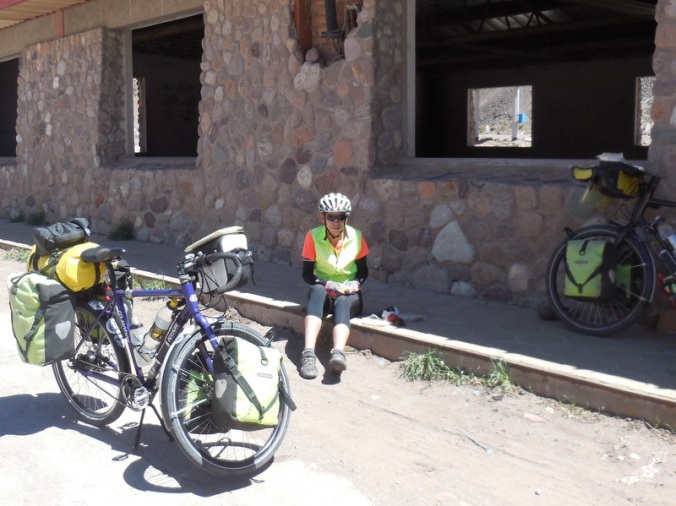 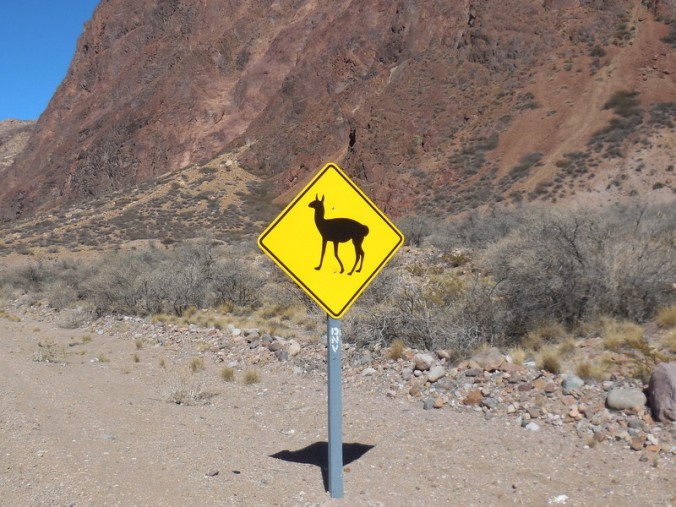 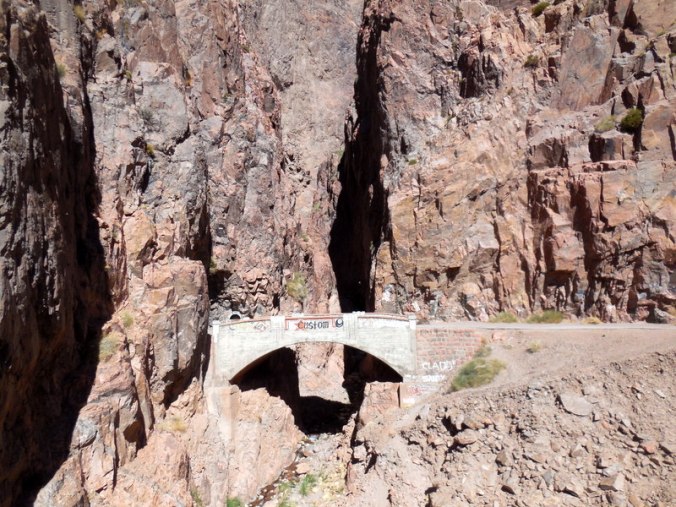 Old highway up the canyon 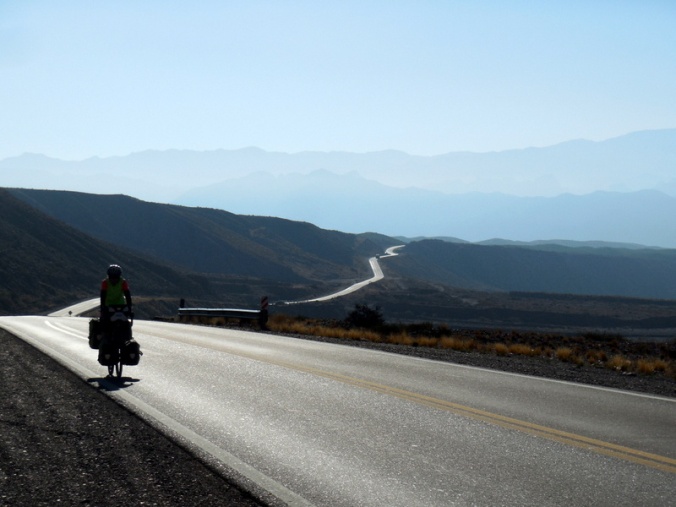 One of my all-time favourite pictures of Nancy riding

Soon after the lunch stop we came across an accident scene where the massive pile of wine bottles seemed to indicate that a winery truck had crashed.  This was not a new crash as we’d seen photos of it in a cyclist blog from more than 6 months ago.  As often is the case in Latin America, little of the accident scene was cleaned up.  I didn’t see any intact wine bottles but my eagle eye did spot an Argentina license plate.  Woohoo – my first plate from South America.  It was a bit mangled but certainly worth extracting from the piles of broken bottles.  I’ll work on it more in my garage after the trip but for now, it is at least recognisable (see below). 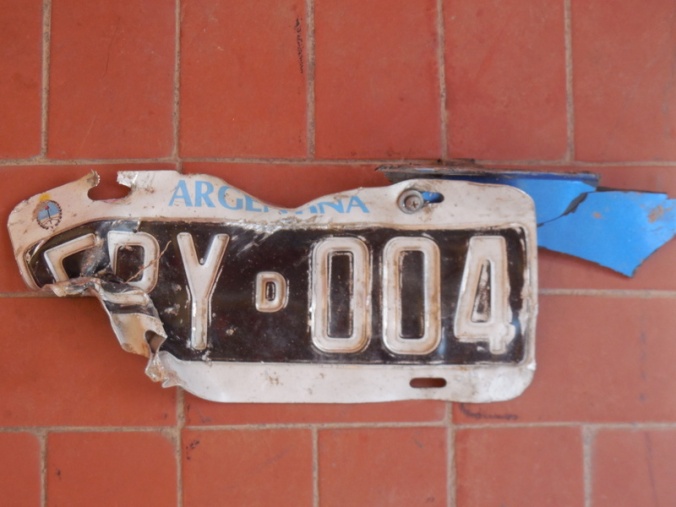 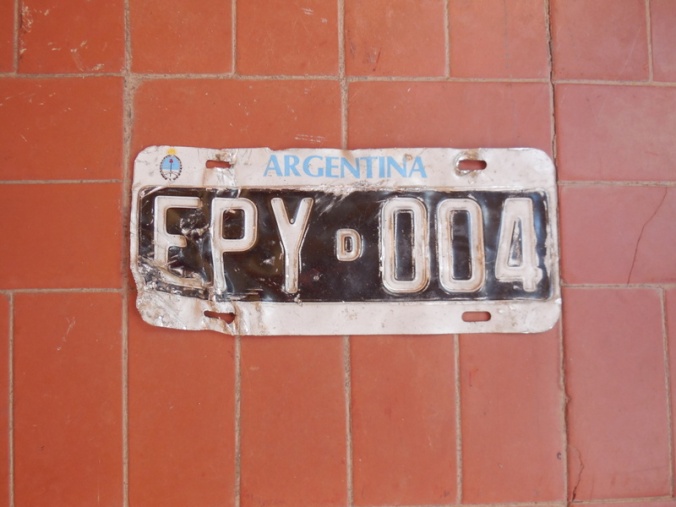 Nancy thinks I’m crazy with regard to these plates and says I have to carry it the rest of the trip (OK!).  Funny, later in the day I spotted two more plates on the side of the road.  One was too sun washed to be readable and the other was a commercial plate without any country markings.  I can’t believe that it has taken me from Colombia to here to finally get a SA plate.  A lucky day for sure!

The last 10k from lunch was a bit of a slog but the views somehow managed to get even better.  First we came across Punta de Vacas’s park-like area where they have built some photogenic monuments.  Then we came up over a ridge and saw the first peak of the Aconcagua range.  Mount Aconcagua is the highest mountain in the Americas and at least until we talked to someone at our stop tonight, we thought that the mountain we were seeing was Mount Aconcagua.  We will see Mount Aconcagua tomorrow once we go another 10k up the canyon – and clear skies are forecast.

We’ve stopped for the night at the ski hill town of Penitentes.  There are a dozen hostels/hotels here but only two appear to be open.  The ski lifts are right on the highway but there is almost no snow left – not sure it was a bad snow year or this is normal.  We had entertained the idea of camping but had no desire to pitch the tent in the howling wind so we took a room at the Refugio Aconcagua.  It is not fancy but it will do for the night. 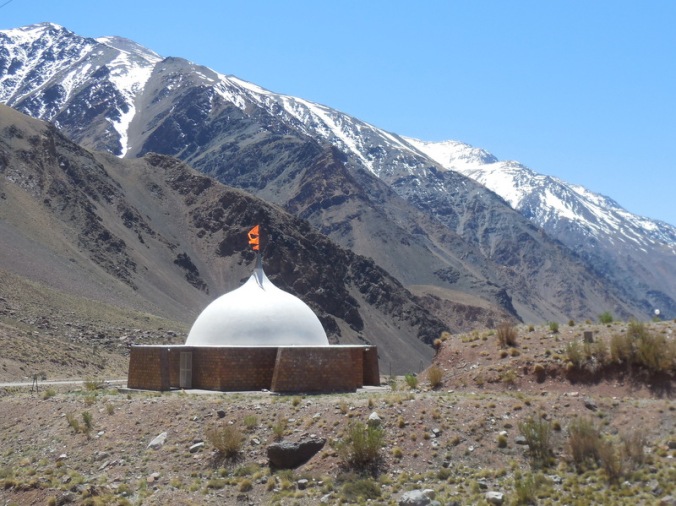 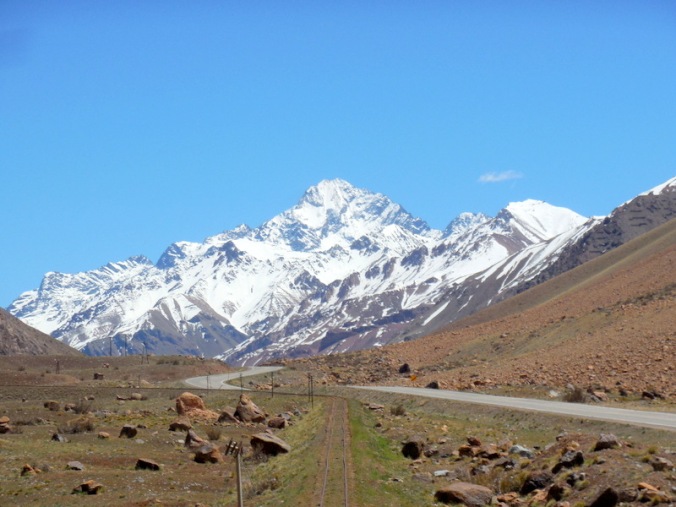 Not Aconcagua but still scenic 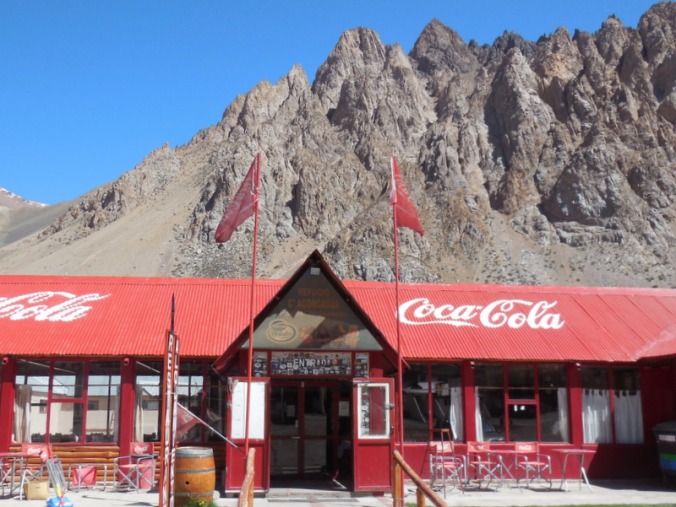 We may eat dinner here but also have a bunch of food in our panniers that we need to get rid of.  We have heard conflicting stories about what we’ll be able to take into Chile but we’re pretty sure that our fruit, salami and nuts will not be allowed.  Pasta with banana, salami, walnut sauce for dinner could also be in the cards (yum).

It’s nearing 6PM and the wind has not moderated any.  We may have more headwind slogging tomorrow but at least we know that we’ve only got 22k of uphill to deal with.  We’ve read that you have to take free shuttle through the border tunnel as they don’t allow bikes.  Wind and tunnels however, are issues for tomorrow.  I’m ending the blog here now so that I can Google banana salami pesto recipes.