Somehow we managed to pull ourselves away from our fancy AirB&B this morning.  It is always hard to leave after a nice extended break.  We spent 7 days total in Mendoza and the days flew by.  There’s something about having nice food, good coffee and great wines; all while also sleeping late in the mornings – it almost makes life seem “normal.” 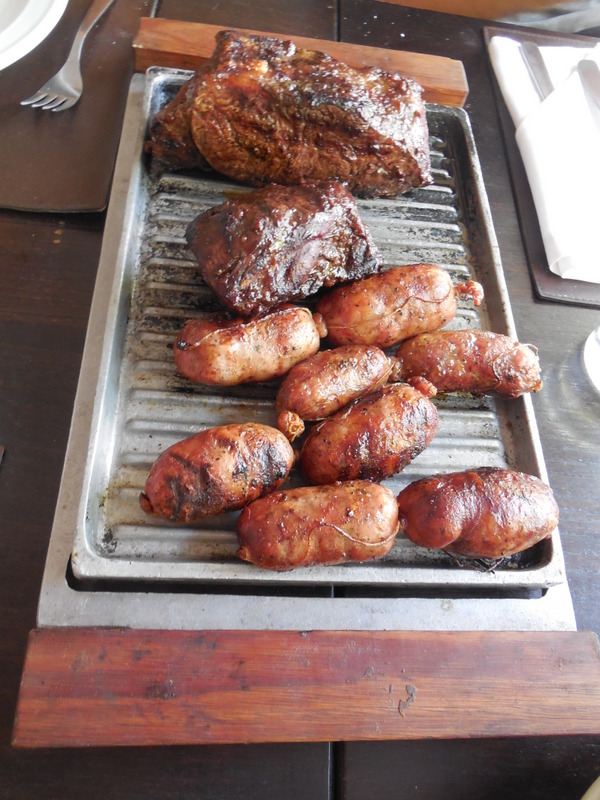 The ride out of town was not too bad.  We avoided Ruta 40, taking side roads, mostly riding south on San Martin Street, the road we travelled in on a week ago.  It was 34k before we reached Ruta 7, the main road heading over the pass towards Chile.  We had a few stops, first at an ATM, to make sure we have enough ARS (pesos) for when we ride back into Argentina in the deep south (where ATMs are reportedly rarer).  We also stopped at an YPF servo for morning tea.  The bigger YPF stations near cities almost always have a nice cafe – and actually serve pretty good coffee. 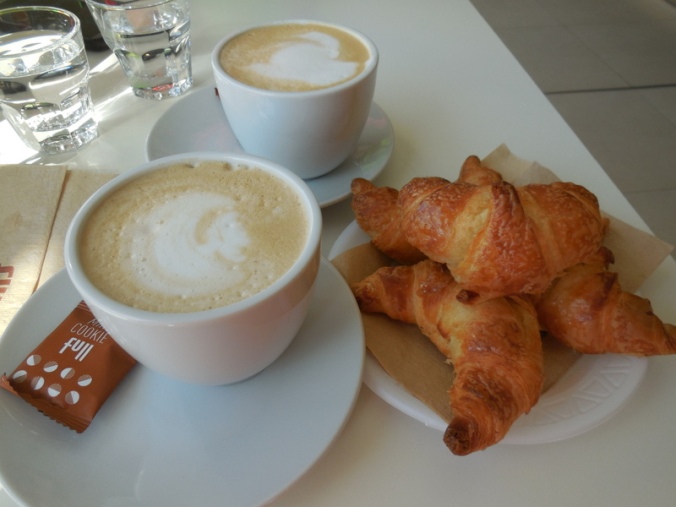 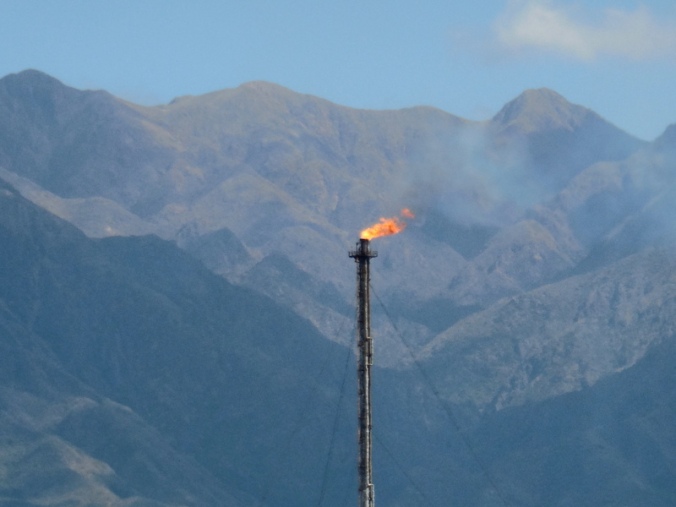 Ruta 7 was much like Ruta 40, the highway we rode from the north into Mendoza.  That is, a massive gravel verge but no shoulder.  As Ruta 7 goes over an international border, there was some truck traffic but it was not too bad.  We bailed out once when trucks going both ways overlapped with us but generally it was more than safe.  Good news as we’ll be on the road for the next 3 days climbing to the top of the pass.  Today was uphill almost all day but the grades were gentle enough that we weren’t overly stressed – all around, it was a pleasant ride. 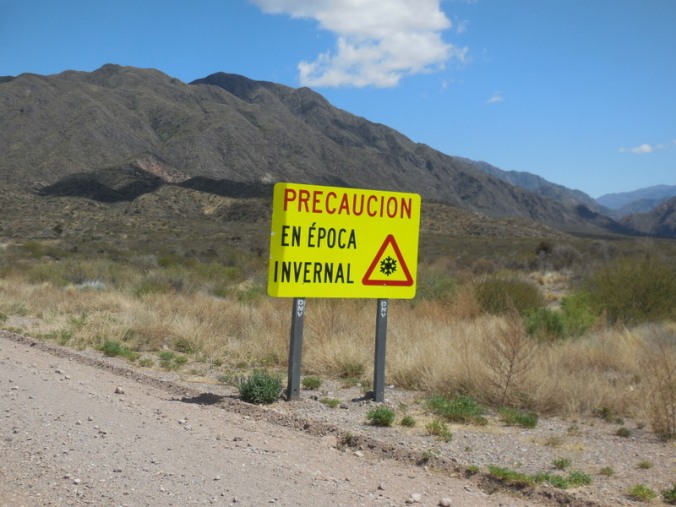 The lake near town

We had planned on riding as far as Uspallata, about 115k but working our way out of Mendoza and the climbing slowed our pace.  We decided to pull the pin on riding at a very small town called Potrerillos, about half way to Uspallata.  We were going to camp here but the ACA campsite was nothing but dirt and full of a large group of teenaged kids so we came back to the town centre and found a cabana.  Finding a cabana was harder than it should have been – there were quite a few cabanas but none of the owners could be located – we were calling in during siesta.

Nancy eventually found one of the owners and we settled on a cabana called Cabanas el Lago.  We have a very small room/building, with its own bathroom.  The bathroom is so small that you completely soak everything when you take a shower, but it will do for the night.  The owner was quite proud that he has DirectTV, letting us watch CNN – it is a little weird sitting in the foothills of the Andes watching CCN overdose on the “Khashoggi” Istanbul tragedy. 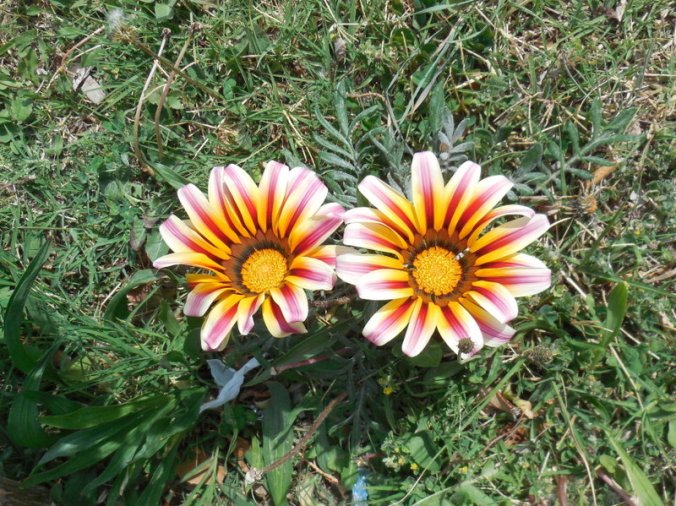 We had the Andes looming over us for most of the morning but by the time we reached Potrerillos, clouds had filled in and blocked our views.  The only photo I managed to get of them was after we arrived in town, at viewpoint where they had an information board showing what I missed taking a picture of.  Tomorrow I’ll have to work on my timing with the camera. 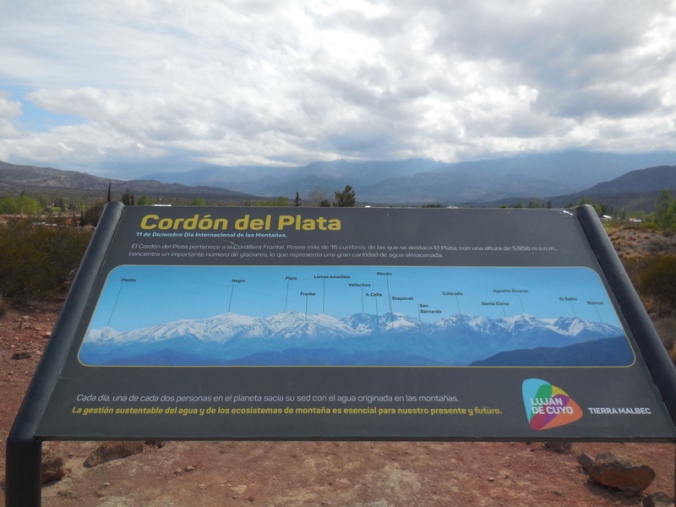 Pretend the mountains in photo are actually in the photo 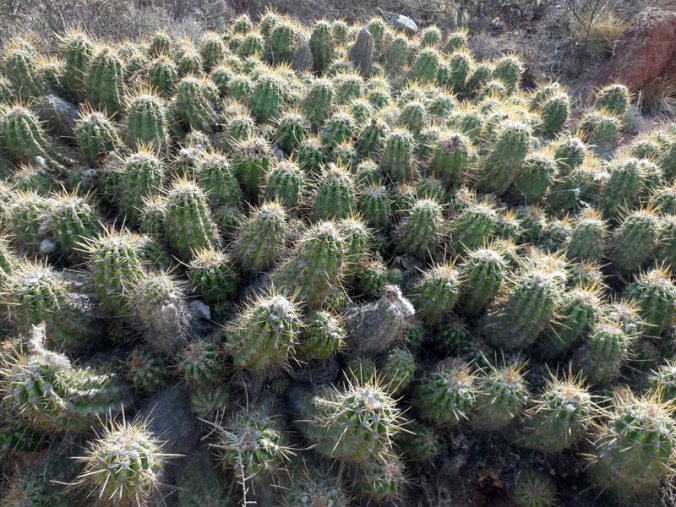 While out on our unsuccessful effort getting photos of the mountains, we managed to find a nice little cafe and have lovely afternoon tea.  The cafe was named “Un Tal Peter.”  “Un Tal …” is used here in Spanish when two people are talking about a third person (in this case Peter).  It sort translates into “and about Peter”.  I liked the name more because it reminded me of our good friend Peter who rode with us on this trip last August/September back when we were in Nevada and California.  Peter is shorter than me so I changed the name to “Un Tall Peter”.  If you reading Pete, know that we thought of you today! 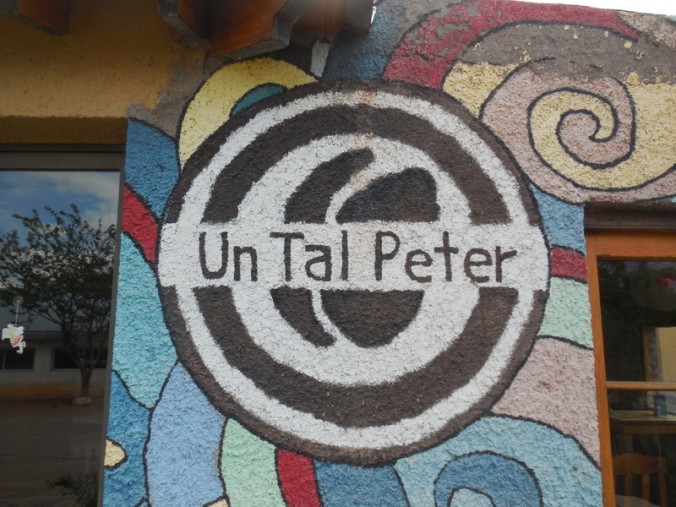 For dinner the owner of the cabana offered to cook and deliver it directly to our room.  We think he also runs the cafe next door.  We agreed on pizza – thinking that it was a little risky but that it probably wouldn’t kill us.  Well, right at 6PM, there was a knock on the door and our pizza was delivered.  It may not have been the best pizza we’ve ever eaten but it was reasonably photogenic.

Hmmm, hard to know what to say – it tasted ok….

Clouds have built up this afternoon to the extent we now can’t see any blue sky.  It is not suppose to rain today or tomorrow but we are in the mountains now and you never know.  The pass we cross in a couple days has a ‘carry chains’ requirement most days, and was closed late in the evening due to a snowstorm(!) only a couple of days ago.  We hope that this was the last storm of the year as needless to say, we don’t carry chains for our bikes.  It’s only about 55k to Uspallata but it’s all uphill so we are aiming on just making it there tomorrow.  And of course, snow would slow us a little as well, so it’s probably good not to push too far.