We got up early, fearing the worst with the wind and ongoing dust storms.  I looked out the window first thing and wow, you could see the hills surrounding town.  And best of all, the trees were not moving.  We were a go!

The fancy Hotel Belen has kind of a business focus, so they were ready with brekkie at 7AM.  We had our bikes packed and were ready to roll even before we ate.  We had our first brekkie buffet in Argentina and made sure that we did enough damage so that future cyclists don’t shock them – I’m sure that they wonder how we stay so skinny for all the food we eat – if they only knew.

We managed to leave the hotel just before 8AM and made our way out to a windless Ruta 40.  And as a special bonus, we had a slight downhill for the first 11k.  While we could see the hills around town, as we rode south, the distant mountains became “greyed” out.  Once we reached the small berg of Londres, we had virtually straight roads and only hazy greyness out toward the hills.  That’s not to say it was dangerous, it was just so flat in every direction and the hills were barely visible as an outline.  There was nothing to do really but put your head down and ride. 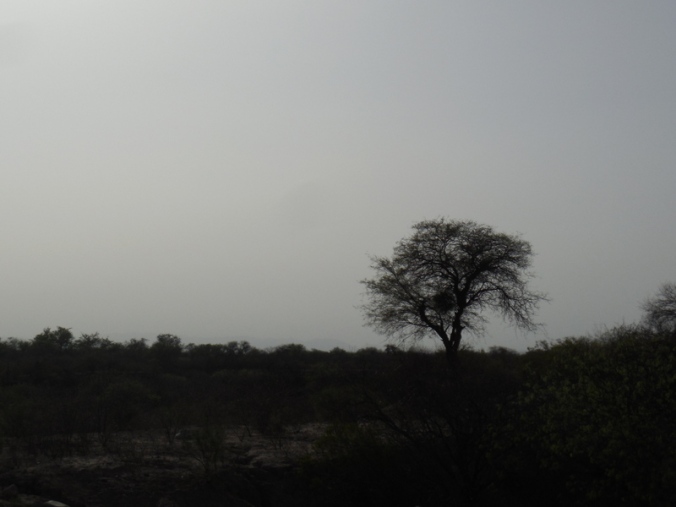 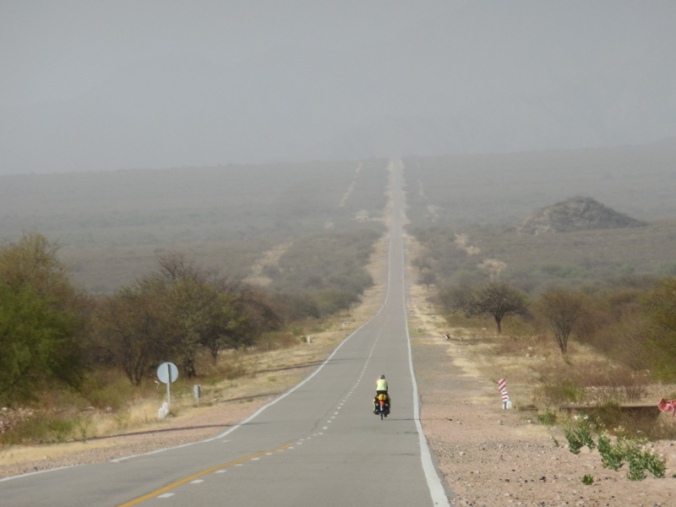 It was pretty much like this for the first 85k.  There was no reason to stop other than for bio breaks and a quick roadside morning snack.  The latter was almost a “made up” stop where I managed to find a sign that was at least worth a photo.  The sign was for travellers going the other way but we needed to eat something – thus stopping at a sign that was otherwise not worth stopping for.

I was very concerned about the wind forecast for today and not sure that we could ride.  Then we go and snap off 85k before noon – how good is that?  At this point, Ruta 40 overlapped with Ruta 60 for about 5k.  There was clearly more traffic on Ruta 60 but really, there was almost no traffic so it didn’t matter. 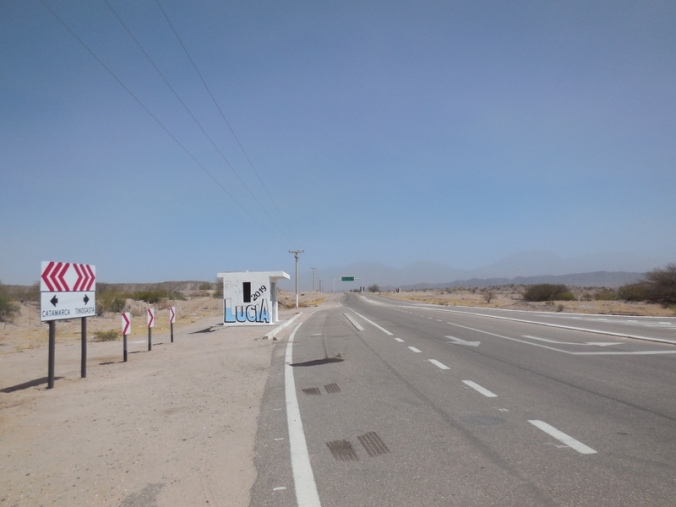 The junction – not much out here

A big flag and we are turning right!

Once we made the turn back onto Ruta 40 we had a slight tailwind (woohoo) and made even better time.  There were a series of small towns on this section of highway that went on until just about reaching our camp.  At one of the towns, Salicas, we stopped at a grocery store for dinner supplies and ran into Andy, a touring cyclist from the UK/South Africa.  He started his trip about 3 months ago in Rio de Janiero and is heading to Canada – sometime in summer 2019.  We traded pointers for the road and wished him well. 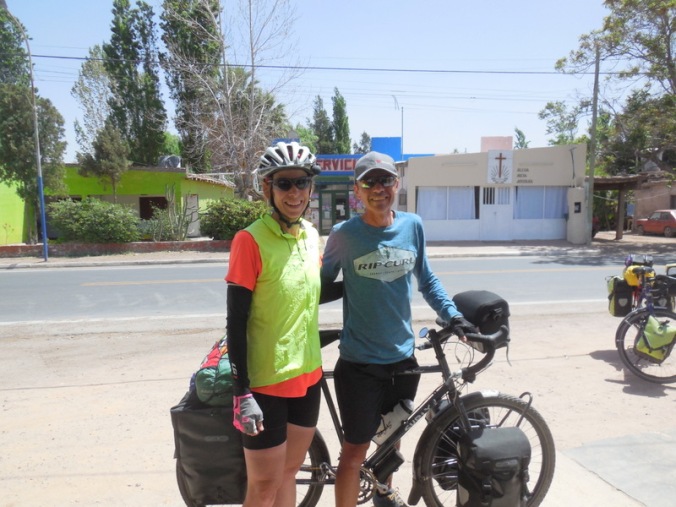 It was kind of odd meeting someone who will be out riding long after we finish – it made us think that we don’t actually have that long to go now.  We had considered stopping Salicas but we’d made such good time today that we decided to push on another 15k to Andolucas. It was so nice having more or less favourable winds and we wanted to make tomorrow shorter.

We are 1.5k off Ruta 40 and found our campground by using the iOverlander app.  The campground is an amazing place.  First up, is it free – I’m not sure why.  Next, it is massive – there are probably over 100 sites here and we are the only ones here.  They have several shower/toilet blocks and most of them are open – again, I’m not sure why.  It was a little hard picking a spot, just because there were so many to choose from.  We wandered a bit before we finally found some grass to pitch or tent on.  The man running the place actually said that we could set-up the tent on the football pitch if we wanted.  There appear to be at least a couple folks working here, they have a kiosk complete with two freezers of ice and one of ice cream.  Like I said, I have no idea why this place is here – but we’re not complaining, it is much better than sleeping in the bush. 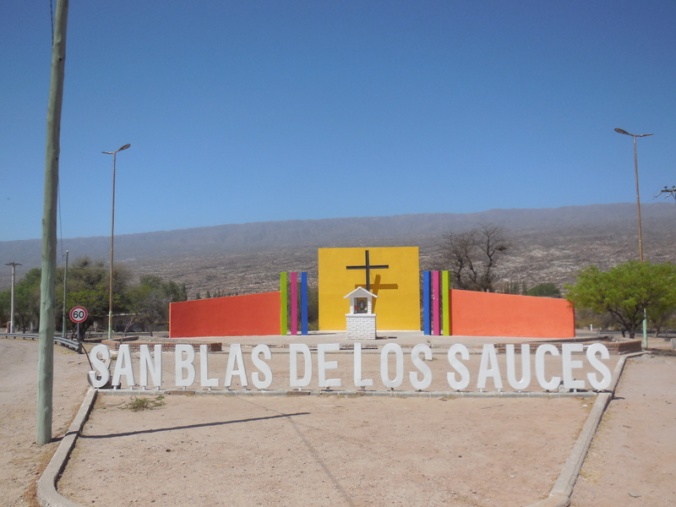 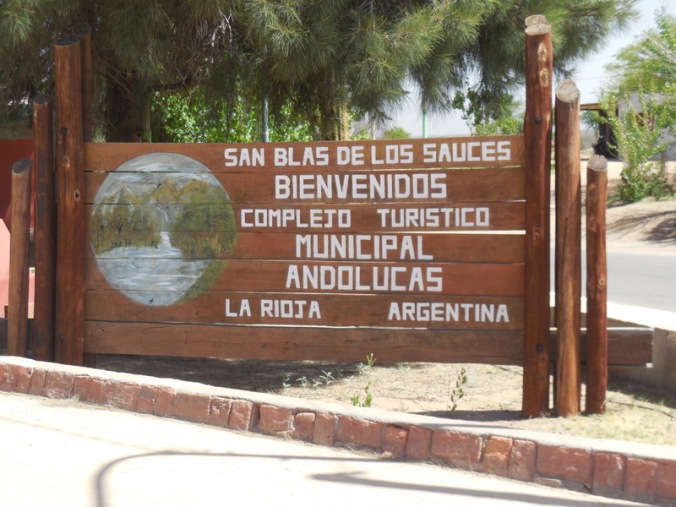 Our camp, with the only grass in the entire place – other than the football pitch

The only issue with the site is really not even an issue – there are two camp dogs that seem to have adopted us for the night.  They have followed us everywhere since we arrived.  They are nice, but two of the mangiest, ugliest dogs you’ve ever seen.  You can’t help but feel sorry for them.  We probably still won’t share our food, however.  Giving them food gives them energy to breed and clearly they don’t need more stray dogs in South America.  We’ll be nice to them and hope that don’t pee on the tent or pass us any fleas – haha.

After today’s bonus miles, we only have 105k to ride tomorrow to reach the next city.  And based on our chat with Andy today, we also know that there are a couple reasonable bailout points.  We can only get intermittent phone signal here so we’ll have to ride the old fashioned way.  That is, without knowing what the wind might get up to.  We’ll leave early to give ourselves the best chance at reaching Chilecito and maybe we’ll even get to take a day off there.  Andy says there is a good bike shop there – we need more bottom bracket work done.  We’ll see how we go…

Six doors of the day – an old ice chest – I’m not sure what you do with these, but we like them