Today was epic – we rode from 8AM until about 6PM.  There were some breaks in there of course but we had massive headwinds and rode through a sand storm, just for fun.  It wasn’t or longest day of the trip but it was certainly one of the hardest.  But I’m getting ahead of myself, let’s start at the beginning.

We knew the day would be long so we were up early at our camp site – so early that we had to turn on the overhead lights.  Had it not been for the lights, my tent mate would have complained even more about the early hour.  As it was, she got up with only a few whimpers – though admittedly, I probably don’t hear as well as I used to and some of the comments are intentionally spoken so that they can’t be heard (Senior editor’s note – I think there is a bit of ‘selective hearing’ going on…and I wasn’t whimpering, for the record).

We probably could have been on the road by 7:30 if we had hustled but it was so nice enjoying our coffee and watching the sun come up.  And it was nice to start riding with the sun actually on us.  We had to ride back through Santa Maria to get back on Ruta 40 – it was pretty sleepy except for the dogs that decided I was going to be their brekkie.  I was chased by two hairless “Peruvian” dogs and a pit bull of some kind.  I kind of panicked trying to get my foot out and stopped, riding sideways across the road.  The owner was chasing the dogs but not before they got too close for comfort to me.  I yelled at her – but really, if I’d been a little calmer, it would have all been fine.  It was our first dog chase in Argentina – so on balance, that’s not too bad. 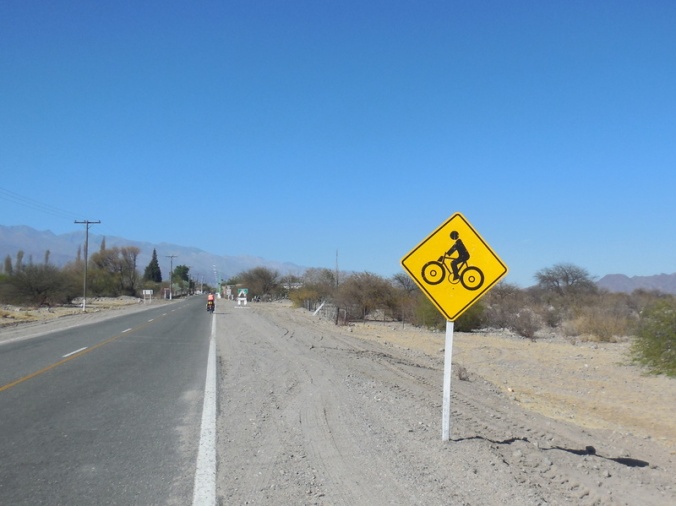 The scenery today was about like yesterday, a big valley with tall scrub covered hills on both sides.  There are not many trees to block whatever wind gets up – this would prove an issue later in the day.  We stopped in San Jose Norte for water, thinking it would be our last chance of the day.  Not long after this we found the cyclist’s dream – an artesanal bakery – and yes it had water.  The bakery was amazing – in a very small town – full of wonderful baked goods.  We each had a blueberry pie and a coffee.  We also purchased a bunch of treats for later in the day and more water. 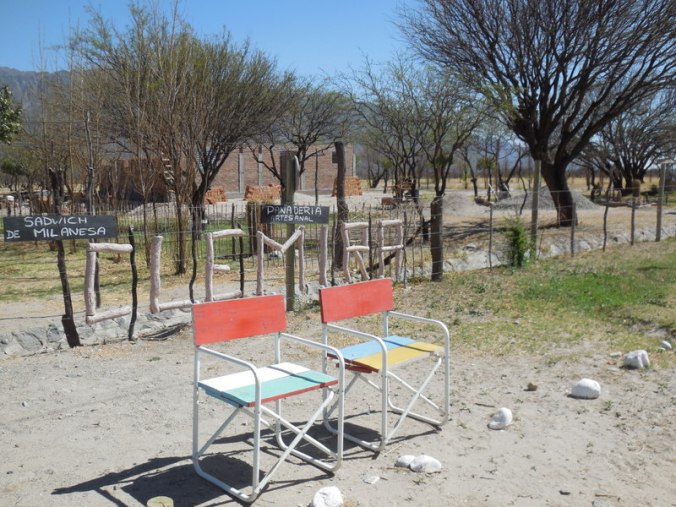 One side of the road – if you build it, they will come 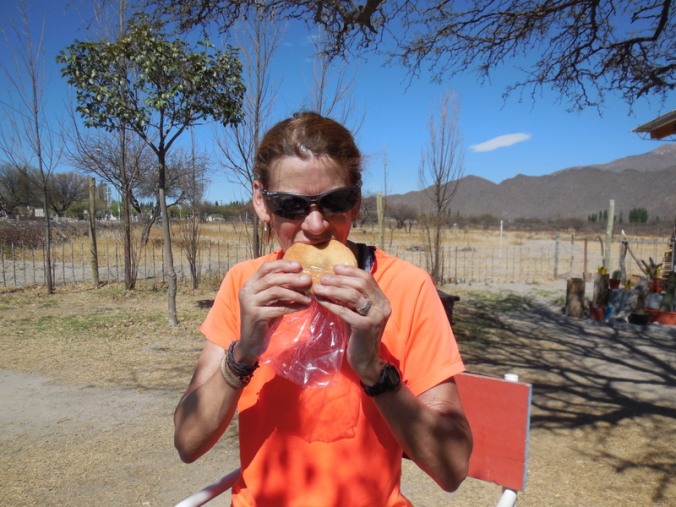 Caught in the act – blueberry yum

Could have sat here all day, maybe we should have

We had a sight headwind and an uphill ride again today but we made slow, steady progress until about noon.  By then we’d covered 45k and were facing have to cross a very large, open and exposed salt and mud flat.  As we enter the flat, we could see a stand storm brewing off to the right, downwind from the direction we were travelling.  The wind was coming out of the south, just shy of a headwind.  We ploughed on thinking we’d bypass the sandstorm to the south. 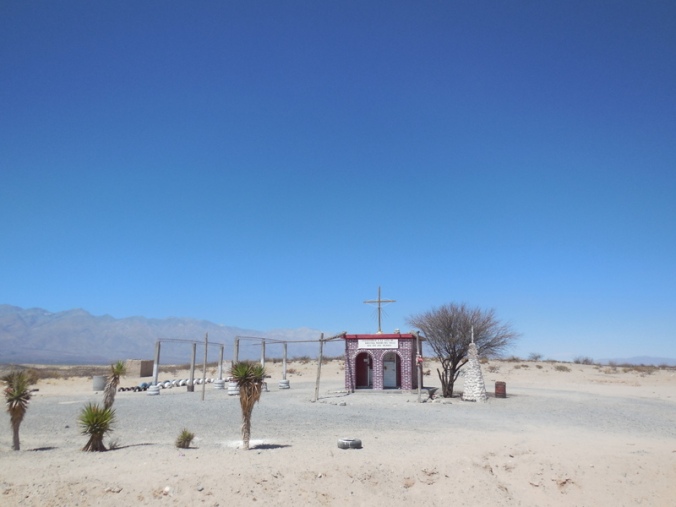 The last building before the flats – no way to enter… 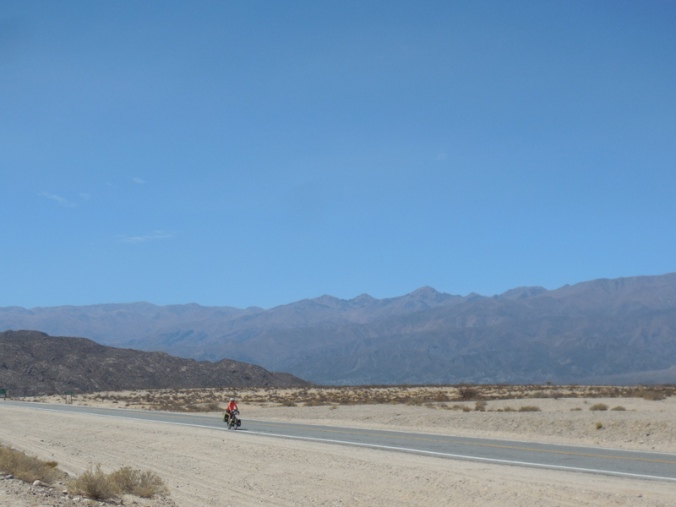 Nancy cruising before the flats 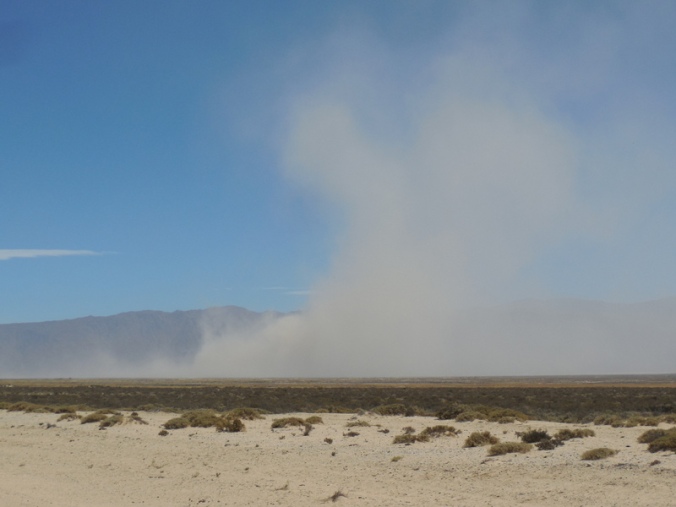 The storm, racing off to our right, or so it would seem

Well, it didn’t work out that way.  The sand storm grew and appeared to create its own wind, moving back to the south and in our direction.  We couldn’t have stopped anywhere and avoided the storm as there was nothing out there to stop at to get any protection from the wind.  We rode on.  The wind gusted from the right, from the storm and then from the left, just the normal wind when the storm ebbed.  We don’t carry a wind gauge but know that we were riding from 6 to 10 KPH for the next two hours (that’s 3.6 to 6.1 MPH) and it was flat.  You’d have to put the wind gusts at more than 40 KPH, maybe 50.  When we got hit with the big gusts we had to hold on for dear life to keep the bikes under us.  And we had to keep our mouths closed to avoid a big gulp of sand and dust.  Thankfully, there near zero cars as a few times we were pushed way out in the traffic lane. 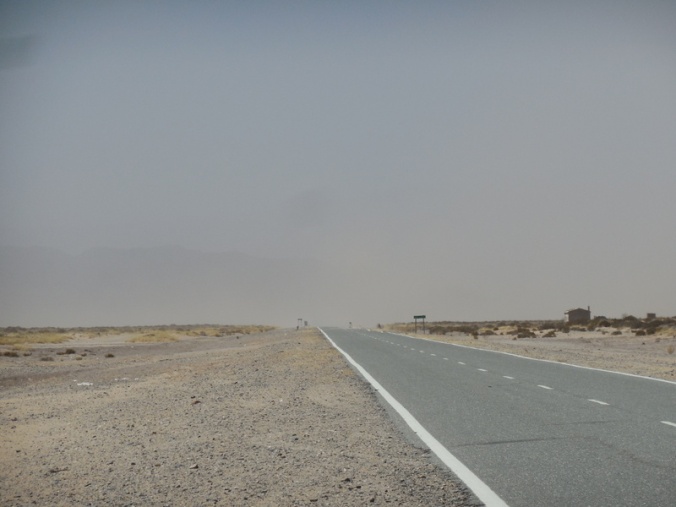 In a lull – the storm has moved in behind us 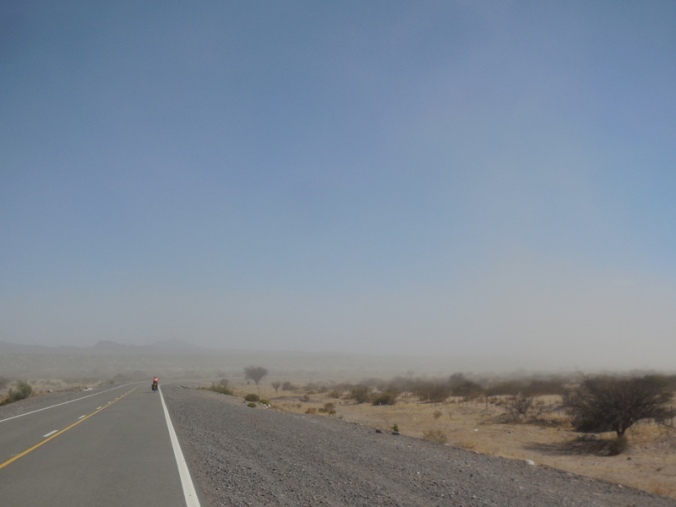 And in front as well

We eventually got out the back side of the storm but by now, the normal wind was raging and you guessed it, on the nose.  We turned a few times but the wind seemed to turn with us.  And even though there was no more sand storm to contend with, we were still getting pelted by sand when we rode anywhere near the dry river that ran through the valley.  When we showered tonight, both of us had sand in nooks and crannies that we didn’t even know we had.  I snapped a few photos but was a bit worried that I’d muck up the camera so you’ll just have to take our word for it, it was epic!

At the far end of the mud/salt flat, we came upon the first structure of any kind – a very dilapidated house to the right and a slightly nice one to the left.  I went to the one on the right as there were some men working, just to ask if we could hide from the wind behind a wall.  I asked about water and he told me that the house across the road was a shop, we just had to knock.  So we headed over there, bought some water and sat at what looked their dining room table to eat our lunch.  We would have stopped earlier to eat but neither of us fancied sand sandwiches.  It was nice of the woman of the shop/home to offer us her private space.

We eventually reached the top of the uphill that we’d been riding since Salta.  It was nice hoping that we would be riding down in to Hualfín but honestly, it was just as hard.  The wind was really raging now and going down faster than 15k required a good effort on the pedals.  The last 35k was mostly downhill but our day was not going to let us off that easy – the slugfest continued all the way to town. 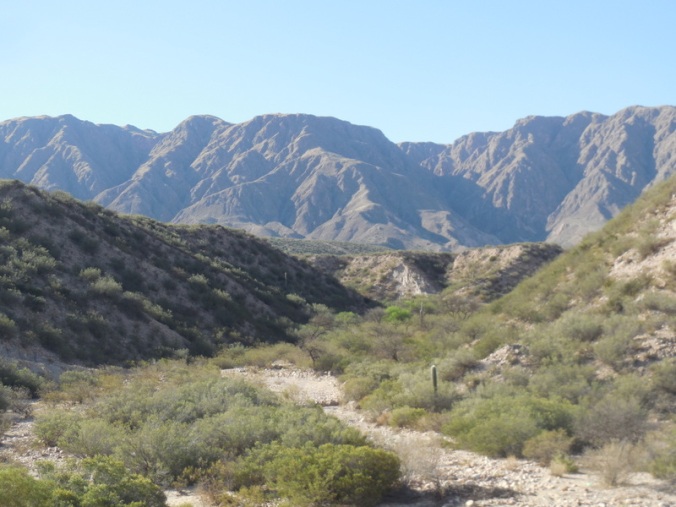 The hills near Hualfin are nice, if you can look up 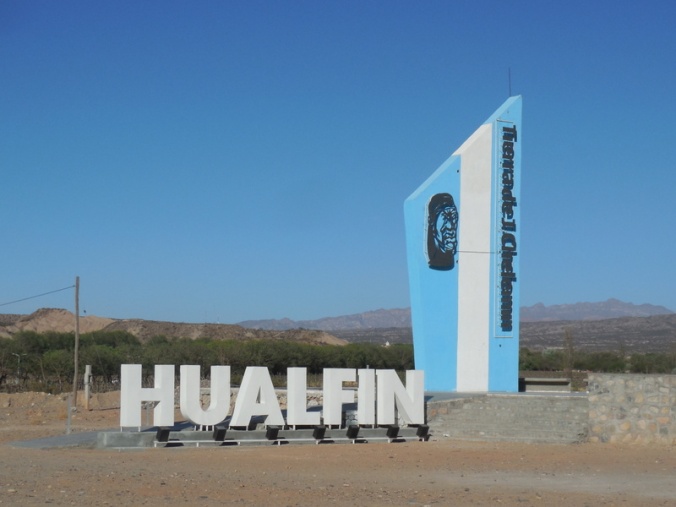 We eventually arrived at Hualfín and found a place to stay.  It’s a basic hospedaje but honestly, they could have told us any price.   The deal was sealed when they told us that yes, they have hot water showers.  As a bonus, they are cooking us dinner and there is WiFi – no bidet which is funny because we might have used one today to get at some of the aforementioned nooks and crannies.  Anyway, we made it, had a heck of a day and have more memories from this trip that won’t fade soon. 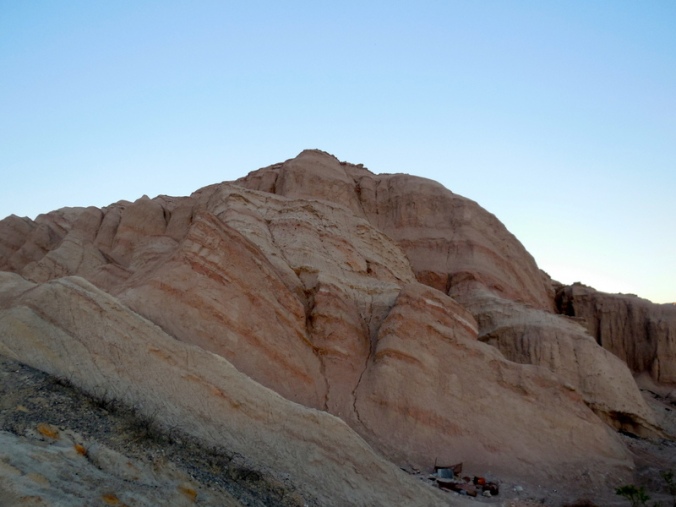 Right behind our hostel 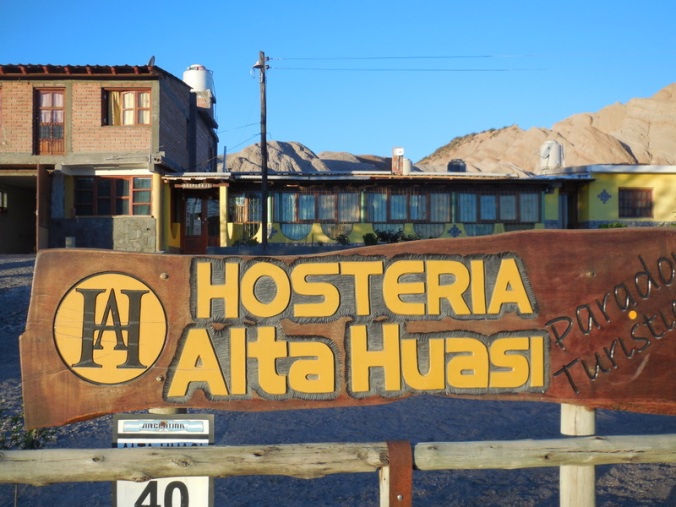 Tomorrow we have a short, downhill day.  Should be easy right?  I guess it depends on what the winds do overnight…  For now, we don’t care.  We made it here, we’re safe, we have food and water and that’s all that matters… 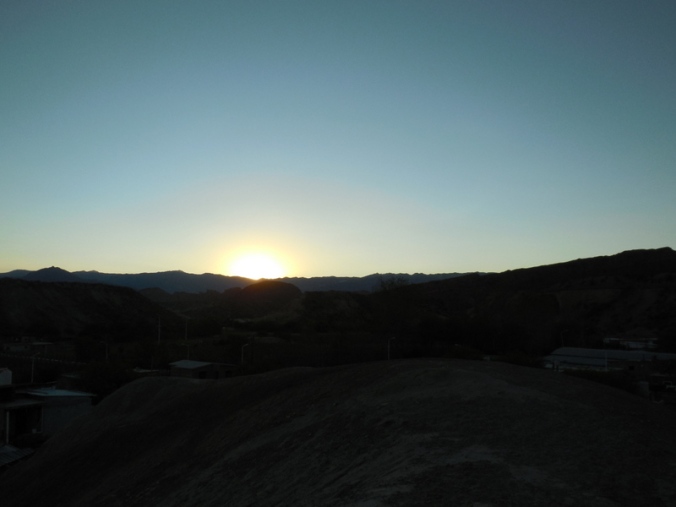