It rained hard overnight and given how cold it was in our room we wouldn’t have been surprised to see snow on the ground when we opened the door this morning.  Thankfully, we had blue skies and no snow – but boy was it cold.

We had a mostly flat ride today through the altiplano (the “high plains”) and the wind was mostly in our favour so it seemed like a pretty fast day (Dave says that we averaged over 23kph for the day).  We could see some snow on the mountains so the Peruvian altiplano is a wide open plain with small villages scattered about.  Often there were just a mud brick house or two sitting out in the middle of fields, with a few cattle or llamas (or alpacas) munching out in the fields.  Often there are a couple men or women out there as well, watching over the animals, as there are very few places that are fenced.  The herds do not seem very big so it’s hard to know how the people out there make a living.  And boy it must get cold out there when the wind blows, as there is nothing to stop it.

About an hour into today’s ride Dave mentioned that his bike seemed to have the wobbles.  Well, shortly afterwards he yelled to pull over and it turned out his front tire was going flat.  It was the first flat tire in some time – neither of us could remember when the last flat was.  It turned out to be a small nail so he put in a new tube and we were on the road again.  We caught up with Philipp and Tine who were ahead of us and continued our nice flat ride.

Home on the altiplano

The long road ahead

After about 65k of riding we finally pulled over at a gas station that was under construction to take a break and eat some food.  I am sure that the construction guys wondered what we were doing but it was the only place we had seen where there was a place to sit down off the road.  As we were finishing up we heard a funny hissing noise and sure enough, Dave’s front tire quickly lost all its air.  For some reason the tube he put in tore a little hole near the valve stem, so our departure was delayed for another 20 minutes while he swapped out that tube for another new tube.  Another patch job for tonight.

We passed through a small town of Pucara – yes, we are still well over 12,000 feet 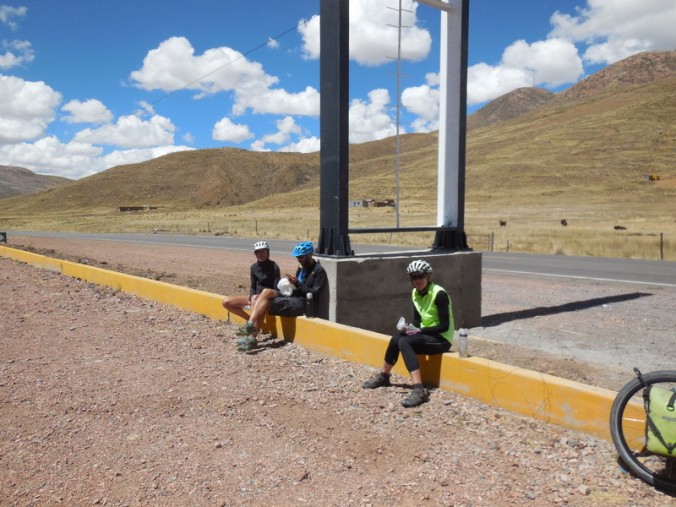 Teamwork makes the dream work – changing 2nd flat – it could be raining so really, not a bad spot for a flat

From our lunch break we only had about 30k to ride to reach Juliaca and it went very fast with the tailwind and the generally flat road.  In those 30k, in addition to the gas station we had lunch at, Dave counted 32 gas stations either under construction or operational.  There was nothing else out there and very few buildings of any kind – it’s hard to imagine the need for more than a couple stations – very odd.

Juliaca is a pretty big and gritty town and it took us some city riding to make our way to the Hotel Pullman, a relatively new hotel where we found a couple of decent rooms for 50 soles each.  After a bit of a rest we walked over to the local shopping mall to get some supplies at the grocery and see what the dining options were.  I know, eating at the shopping mall sounds pretty boring but actually the food was decent and it was kind of fun people-watching.  Shopping malls are so far and few between for us – it was a fun change of scenery.

Hotel Pullman – home for the night

At the mall, Philipp finds a Pisco bar – Tine says “no”

Police van on the street – serious

Some sort of military academy, not sure what the black flag represents

After an ice cream cone for dessert and picking up supplies at the grocery store we made our way back to the hotel and Dave got onto his job of patching up the tubes from today’s flat episodes.  Tomorrow we have a short ride down to Puno, one of the more touristy cities on Lake Titicaca.  We may take a day off there to go do a tour on the lake – a bit touristy but it is supposed to be fun so what the heck.  Philipp and Tine are going to head east to a small peninsula and then see about getting a boat to somewhere on the south shore, or potentially take the north route along the lake.  We have been riding with them for most of Peru so it will be a bit strange to be on our own but we should meet up again somewhere along the way to La Paz or in La Paz.

Only a couple more days in Peru – hard to believe we’ve been riding in this country since 23 June and have travelled over 2000 miles.  We’d certainly recommend it as a place to visit, and we’ve only seen part of it.  Perhaps we’ll have to make a return visit to see all the places we missed…