My stomach bug came back today and it was my turn to take it for the team.  We had about 37k to ride to reach the top of the second pass but I was not riding very strong and had to have several bathroom breaks.  We rode about 24k when I decided that I needed to look for a ride and let the others continue.  It was a longish day and I was just slowing them down.

We stopped and tried to flag down a taxi/bus but the first car to pass was a policia pickup/ute.  Even though Philipp was just about standing in the middle of the road and we were all waving wildly, they didn’t even slow or acknowledge him.  Wow, what if it had been a real emergency?  The second car was much nicer however.  It was a smaller car but the driver, Juaquin, was more than happy to pull over, fit me and the bike in and in his words, take me anywhere I wanted to go.  Juaquin was on his day off as the regional salesman for ABI – the biggest Peruvian beer distributor.  We agreed to have him take me to the planned stop for the night in Huancarama. 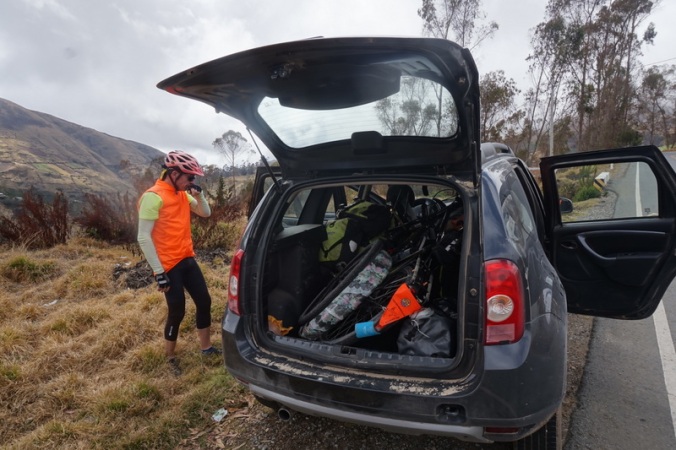 Everything fit – barely – Sorry, didn’t get a photo of Juaquin

The ride to town was exciting as Juaquin is a “car driver” and we were on a twisty Andean mountain road but I arrived in one piece and found the hotel everyone had agreed to meet at.  Tonight we are staying at the Huancarama Hotel Milton (no that is not a typo, I wrote Milton, not Hilton – haha).  It is very basic but good enough.  I rested, recovered from the car ride, had a nice hot shower and got some chicken soup from the shop across the street.  When everyone else arrived some 4 hours later, I started a course of antibiotics – enough of this.

I have a few photos from today, but either from after reaching town or a couple taken by Philipp when he was riding.  I was not in the mood this morning, funny that.  I’m kind of bummed that I missed today’s ride as it was quite scenic from what I could see in the car.  The others arrived at hotel tired, cold but happy – they had a good day on the road.

View from the hotel roof

We have a shorter day planned for tomorrow and the destination is a much bigger, nicer town.  Right now after my afternoon of rest, and the antibiotics, we are planning on giving it a go.  There is much less uphill tomorrow as well, making the overall stress much lower.  Perhaps we’ll take a day off there if this thing doesn’t quiet down.

So, another day of exotic life on the road.  My team helped me out once again and a road angel named Juaquin helped a potentially bad day turn out ok.  All’s well that ends well.

Nancy’s thoughts on the day:

We did have some beautiful terrain today and it’s a shame Dave was feeling poorly again and couldn’t ride the whole thing.  He wasn’t moving as slowly as he was the other day but he was pulling over at regular intervals, anywhere there was a gas station or a tree!  Lots of gastrointestinal pain – he clearly wasn’t having a good time.  When the second car stopped and the fellow jumped out to see if he could help it seemed like karma – he spoke English and was willing to do whatever was needed to help out.  I always get a bit nervous getting separated as Dave has the only phone with a sim card so I have no way to contact him unless I can find wi-fi somewhere – which isn’t easy sometimes in Peru.  But both of us would not fit in the car with the bikes so we had no choice.

Once we got Dave and his bike and bags into the car, they took off and Philipp, Tine and I packed up and continued up the rest of our climb.  It was about another 16k or so to the top and it actually seemed to go by relatively quickly as we chatted away.  It did get colder though and near the top fog and mist rolled in to make it a bit eerie.

Even at the very top, with the cold temperatures and the fog bank there were families out working in the fields – it looked like they were mostly pulling up potatoes.  Young kids were helping out and there were some little ones running around without hats or even jackets.  It certainly is a hard life for many of the people here, but they are always quick to smile and say hello when we wave at them.  The little ones generally come running yelling ‘gringo, gringo’ and just really seem to want a smile and a hello back for their efforts.

We rugged up again at the top and started a nice downhill – not too steep with some little rises every now and then to keep us warm.  The views were very nice – mountains all around us, as far as the eye could see.  We stopped in the little village of Kishuara to eat some food before we continued heading downhill to hopefully meet up with Dave in Huancarama.

More beautiful scenery (sorry, you’ll have to trust me as Dave had the camera again) and switchbacks took us all the way down into town.  We easily found the hotel where we agreed to meet – this is basically a one street town so it would be hard to miss.  As we pulled our bikes into the lobby area we saw Dave’s bike and knew that he had arrived safely.  He soon came out of the room and looked better, having had a bowl of chicken soup and a nap while waiting for us to arrive.

After cleaning up, digging out the antibiotics and getting some supplies we headed out to find something for dinner.  We ended up at the restaurant across the street where Dave had chicken soup yet again, though this time with some nice bread rolls that we picked up around the corner.  Now it’s time for bed, and hopefully Dave will feel better in the morning and can ride with us to Abancay. 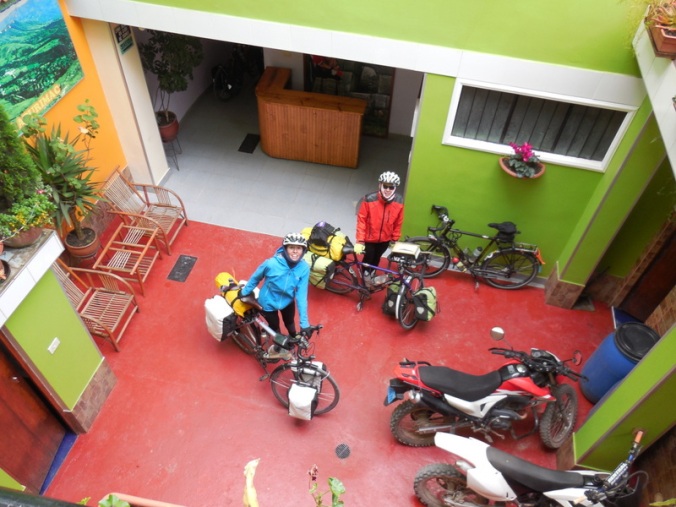 Yeah, everyone made it!