Okay, I am really tired but Dave is insisting I write the blog for today so I’ll give it a shot before I fall asleep.  Today was a long day – we didn’t get to our hotel in Huancayo until after 5pm.  We did have sunshine the whole day, and a climb first thing out of the box to warm us up so it wasn’t all bad.

We were riding away from our hotel this morning by 7:30, starting our 25k climb within a few kilometres.  The roadway up the hill was lined with houses, and as per usual in Peru many of them were guarded by dogs.  It’s often hard to tell if a dog will just sit there and let you ride by, or whether they will bark and chase you.  As we rode by one house with a dog, it looked like it was going to be one of those ones that can’t be bothered to get up.  This one did a little fake-out, resting calmly until we were right next to it, at which point it leaped up and out to the street straight at me.

Usually we can avoid serious altercations with dogs by yelling at them and stopping if necessary.  If they get close most dogs just bark and snap at the panniers.  This dog looked particularly nasty and our yelling and stopping didn’t do much to stop his charge at me.  He came straight at me and went for my leg, getting his jaws around my upper calf.  Fortunately I was wearing my leg warmers so he couldn’t really get a grip and let go after his initial charge.  Dave was right there and was yelling at him and then proceeded to spend the next 10 minutes throwing rocks at the dog as it continued prancing around barking and snapping.  The bite didn’t really break the skin (no blood), just a few scrapes and a nice bruise.  Thankfully Dave was able to finally get by him after many more rocks – that was the meanest one yet.

Meet these two guys on the climb – didn’t get their names but they were super friendly and wanted photos taken – thanks for the nice moment, after the dog incident

Looking back down at Tarma

After all that excitement the rest of the climb seemed pretty calm.  We crested the top at about 11am, stopping for a chocolate break (thanks to Philipp and Kathrin for the nice Sublime chocolate bar surprise) before we started our long descent into the town of Jauja.  We rugged up for the downhill, as it was pretty chilly up at the top at over 4100 meters.  We made our way to the town square in Jauja and spent some time hanging out in the sun having lunch. 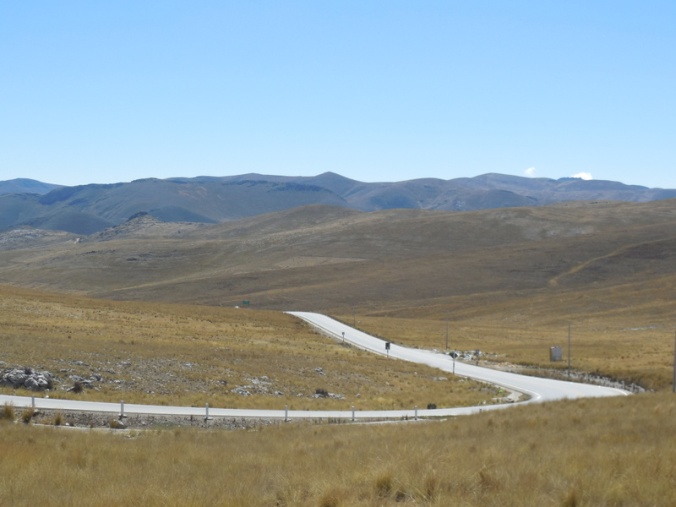 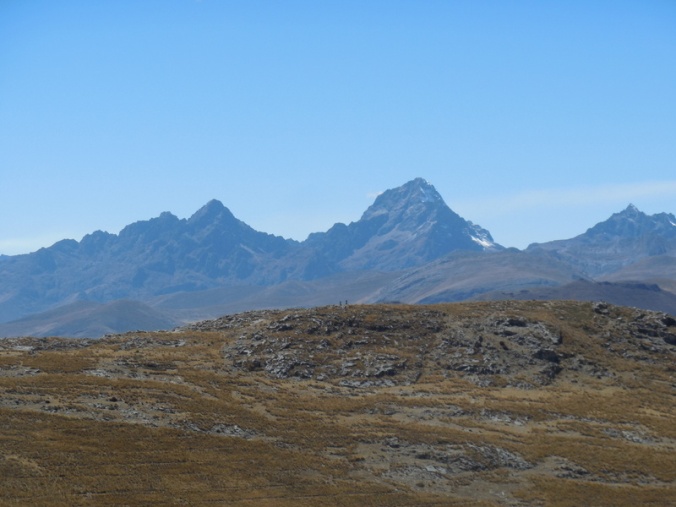 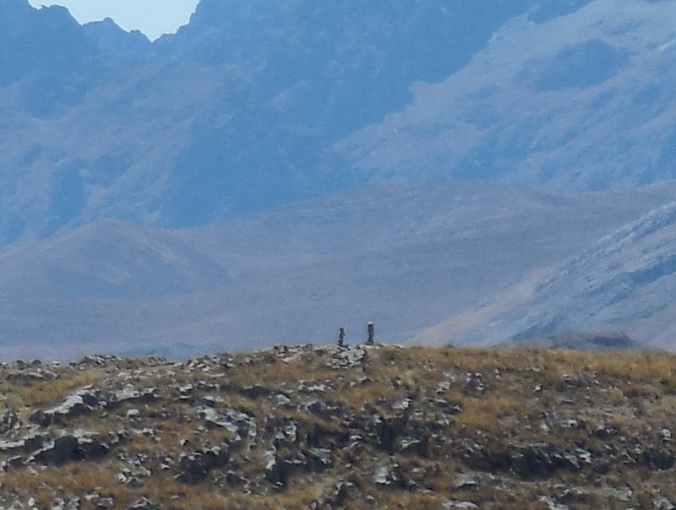 Close up of the “people”, turns out to be rock piles

Seen on the climb in small berg of Huaricolca – couldn’t find any physical or online reference to what it was about?

Our downhill was fast and smooth 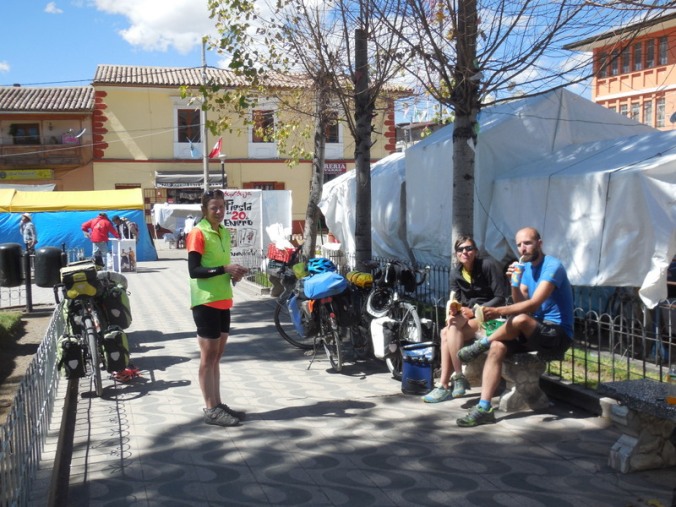 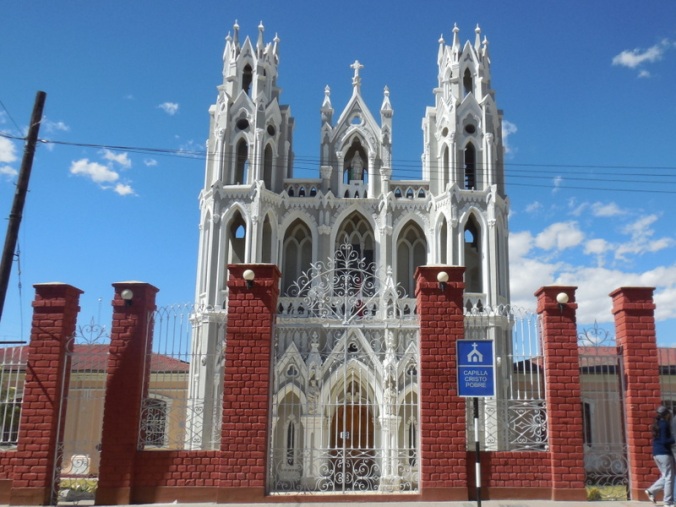 From Jauja we had another 50k or so to ride to reach Huancayo.  It was all relatively flat or slightly downhill but we were on a pretty busy road so we were all on high alert to watch for traffic.  Lots of buses and taxis seemed to be plying the roads and they are the worst drivers here.  The scenery wasn’t great – mostly small mud brick dwellings on what looked to be small farms, with many little ‘Zona Urbana’ areas that weren’t really much.  Dave talked to Philipp almost the entire 50k while Philipp broke the wind riding in front.  Nice trick Dave, get the strong young German to do all the work by distracting him with conversation.

The road surface seemed to deteriorate as we got closer to Huancayo, with speed bumps appearing almost every 3-5 kilometers and beat up pavement in between.  Huancayo is a city of almost 400,000 people so just like everywhere the city has spread out far beyond the main town area.  We rode almost 15k until we got into the city proper, with increasingly aggressive driving by the multitude of buses and taxis on the road.  Dave started to treat the drivers in the same way he did the dogs – waving his arms and shouting at them regularly.  Thankfully he didn’t reach the stage of picking up rocks and throwing them at the cars, though I am not sure that wasn’t too far off.

We parted ways with Philipp and Kathrin just before our turn off the main road to our hotel, as they were headed a bit further south in town to get somewhere close to the train station so they could catch an early train tomorrow to Huancavelica.  We have a rest day planned here, mainly to have a chance to resupply and get ready for the next leg to Ayacucho which looks like it has some challenging days.  Today my bike started making some noise so getting it to a bike shop tomorrow will be the first task.  Dave thinks it will not be hard to fix so hopefully that turns out to be right.

We had to search for our hotel, the Wayta Posada, a little bit as they had no real sign that you could see from the road.  After getting checked in to our room and enjoying the nice cup of hot cocoa leaf tea we cleaned up and headed out to a restaurant recommended by our hosts, Carumba, which is thankfully just down the street.  We both had great meals, and a nice glass of wine, and are now ready for sleep.  Well I was a long time ago, but as I mentioned Dave insisted that I write today’s blog.

And, good news (at least for us), Philipp and Kathrin have elected to stay in Huancayo to get some work done on Philipp’s bike (it’s creaking even louder than mine) so it looks like we will continue to ride with them when we leave town on Tuesday.