I’ll start at the end, just to get it out of the way.  We’ve been in at least 20, maybe 30 hardware stores since we’ve entered Peru.  The purpose of this effort was to find an immersion heater that would run on 220v, the power of Peru and points south of here.  Our conclusion to this exercise is that they don’t exist.  For starters, a handheld immersion heater is pretty dodgy.  I’m sure that they are not UL rated or tested.  If a 110v heater is such, then a 220v heater is much worse.  So it’s probably right that they don’t make.

We like our morning coffee (and oatmeal) however so today we bought a cheap kettle that we will strap to Nancy’s bike.  We could use our stove but it’s a bad idea firing up a stove inside a hotel room.  The kettle was cheap so we’ll keep looking for better solutions.  Meanwhile, all the ultra light hikers, weight weenies and bike packers out there can start mocking us privately now.  That way, when we meet in person, you’ll have worked out all the good lines.  And tomorrow morning, we’ll enjoy a nice coffee…

Hope to replace this with something smaller…

Back to today…  We were up early to try getting out of Jaen before all the tuk tuks got going and were mostly successful.  It is a loud, busy and traffic-intense town.  Thankfully, most of the traffic is tuk tuks so at least you aren’t dealing with cars trying to run you over.  Now if only someone could teach the tuk tuk drivers that they are supposed to stop when turning right onto the road in front of you.  Until now at least, they seem to think that speeding up and merging blindly is their god given right.

We had a 8k climb getting out of town.  We were the only two in our loose moving possie of touring cyclists to go the way we went.  The rest took a short-cut that had some dirt, a river raft crossing and perhaps some bumps.  We decided that we wanted smooth pavement all day and took the 10k longer highway route.  We’ve not heard from anyone on the state of their road but I’m happy to report that our road was wide, smooth and nearly traffic free once we broke free of Jaen.

Jaen in the rear-view mirror

We saw several of these on the uphill

After the 8k uphill, we had a 15k brakefree cruise down the other side.  It is so fun going down a hill without having to ride the brakes and/or dodge rocks.  We were in touring bike heaven.  At the Marñon River we turned north (I know, wrong way if we are going to make it to the bottom of the continent).  The ride down river was through a beautiful gorge with lots of sandstone cliffs and more rice paddies.  We were really happy with our route choice now. 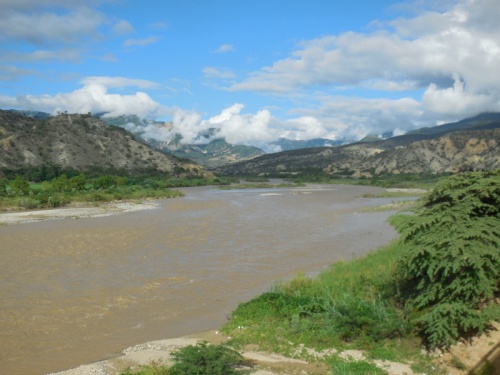 We stopped for morning tea at a roadside shop (more like a tent) just in time to catch the Peru v Australia halftime highlights.  At that point it was 1-0 Peru.  Ultimately Peru won 2-0.  We would have liked Australia to have done better but honestly, being from Oz with a loud group of happy Peruvian fans at halftime was probably more fun.  Everyone was in a good mood and there appeared to be a few beers flowing – we made a note to try finishing the ride before the game ended. 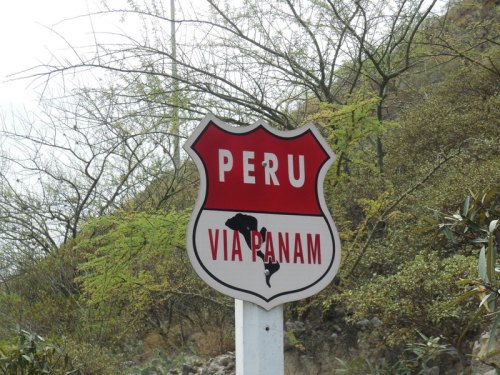 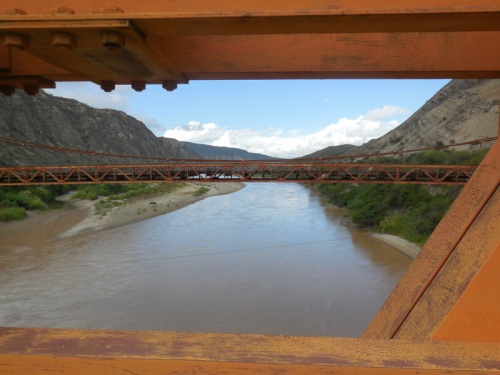 Old Marñon River bridge from the new one

The last 25k were pretty easy as well.  There were a few hills when we left the riverside but nothing too strenuous.  The landscape became more like Baja or Northern Nevada – that big desert vistas, cacti, and long stretches of road where we didn’t turn.  For a while we almost thought we’d time warped out of Peru.

The long road ahead

We were still a bit confused when we reached Bagua Grande.  It’s a dry, dusty town with a blue collar working feel.  The plague of tuk tuks is on here as well but being a smaller town, it’s not too bad.  We spent the afternoon walking the town hardware stores with limited luck.  Eventually we gave up and chose the sure-to-be-mocked path noted above.  Anyway, you do what you have to do.

We are staying at the Hotel Bagua Grande – it is nice, servicable.  It took 30 minutes for the hot water to get sorted and the internet is pretty spotty but our room is quiet and the AC works.  We haven’t thought to ask for AC for months but it’s nice to have here at the lower elevations.  We climb a little more back into the Andes tomorrow but the real going up starts the day after.  For dinner we had Chinese again – it’s actually pretty good here and a nice break from the standard chicken plate.  We are really liking the saltiness of the wonton soup that they start every meal with. 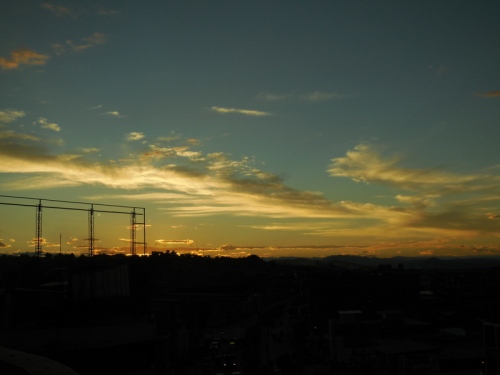 And I’m sure that we will sleep well tonight – knowing that we have a nice cup of coffee made with our new kettle, waiting in the morning.

This entry was posted in Americas trip, Peru. Bookmark the permalink.