The themes of today – rain, rice and riding with other cycle tourists.  The sound of rain coming down hard woke me up in the wee hours of this morning – not a great sound to hear when you have over 100k to ride soon.  All I could do was try to go back to sleep, hoping that all of the rain up in the clouds would fall out of the sky before we headed out this morning.  Unfortunately it was still raining when the alarm went off at 5:45 but it didn’t seem to be coming down quite so hard so fingers were crossed that it would slack off even more by the time we left the hotel.

The breakfast that was included with the room was only two small rolls, a piece of cheese and some butter and jam – oh, and a small glass of fresh juice and the teeny tiny little jug of coffee to share that we experienced for the first time yesterday.  Certainly not enough to feed two hungry cyclists with so far to ride, so we had breakfast in our room (cereal with milk and bananas) before going down to the hotel breakfast.  We met up with Philipp and Kathrin in the restaurant, and then set off with them toward Jaen by about 8am.

The rain started falling lightly not long after we got out of town and continued for the first 40k or so.  But in contrast to the rains of Columbia and Ecuador, it wasn’t really too bothersome as it was very warm.  The only downside was that we couldn’t get a full picture of our surroundings, as the hills around us were socked in with fog.  We came down out of the hills and onto a wide valley plain and as the fog cleared it felt like we were in SE Asia.  The fields were covered by rice paddies, with some occasional banana plantings thrown in.  Lots of terraced paddies, just like you would see in the farmlands of Thailand, with the temperature rising to match. 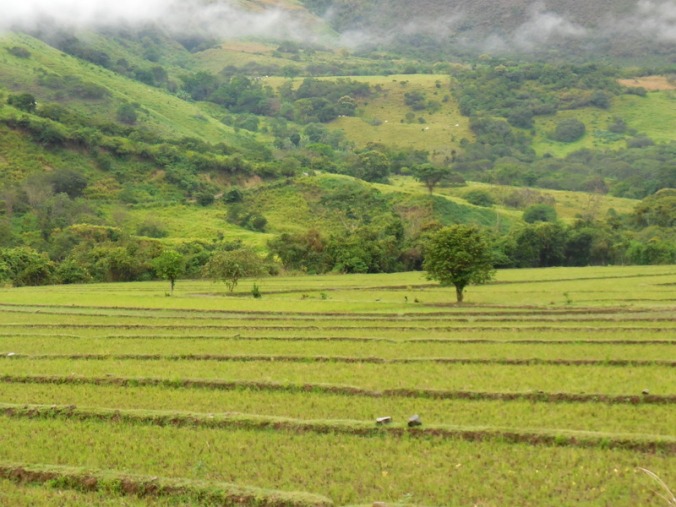 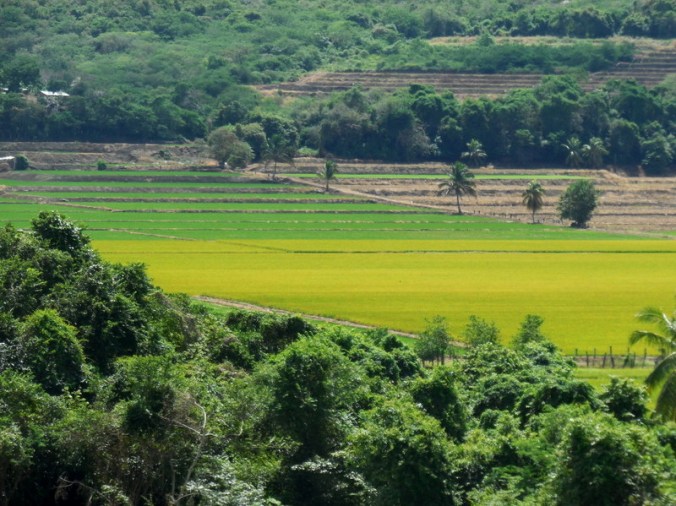 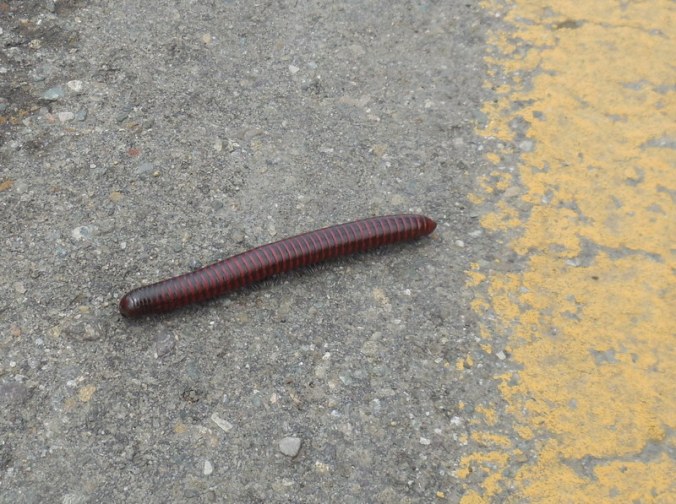 We saw heaps of these multi-peds on the wet road

The road was relatively flat today – I guess 3900 feet of climbing is nothing to scoff at but it felt so gradual and comfortable today after the last few days of Ecuadorian hills that it could have easily been completely flat.  Plus we had lots of good conversation to make the time pass quickly and so we were half-way to our destination by 10:30 or so.  We stopped a few times to get some cold drinks and eat some snacks, and to fight off a few of the Peruvian dogs which unfortunately seem to have characteristics similar to those in Ecuador.  There seem to be lots of them wandering about in the middle of nowhere, most of them looking quite thin and hungry, which was sad to see.  Sympathy doesn’t last long though when they start to chase you, barking and snarling.

Last of the rice for today

Philipp and Kathrin planned to take a shortcut bypassing Jaen, which goes through a little community called Bellavista from where you can take a “boat” across the Marañón River.  I say a “boat” because it from the pictures other cyclists have posted the boat looks like a couple of planks of wood on metal drums.  I am sure it isn’t that bad, but we decided against taking the shortcut as it looked like there were some dirt roads to get to the river and up the other side, which from other cyclists’ pictures can get quite muddy when it rains.  We’ve had enough of dirt roads for a little while, and wanted to make a stop in Jaen for supplies so we said goodbye to them at the junction to Bellavista, knowing for sure we will meet up with them a bit further down the road. 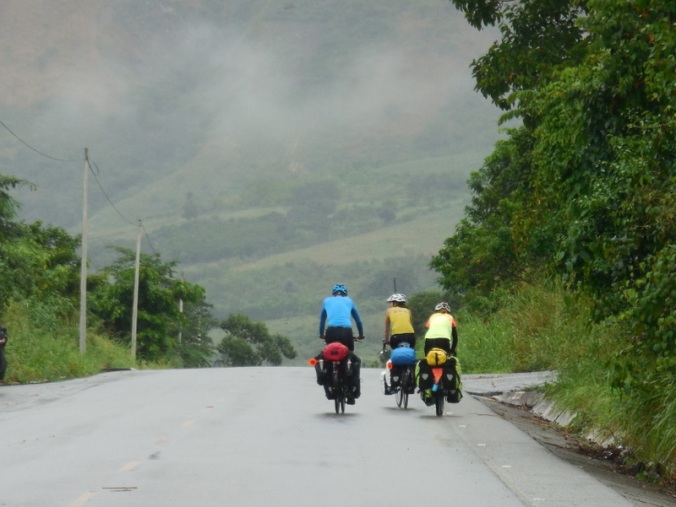 Bunch riding in the rain 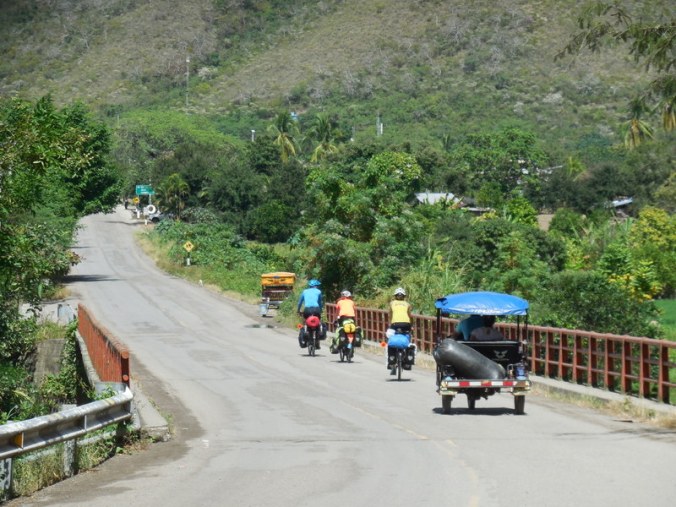 We made it to Jaen city center around 3, after stopping at multiple hardware stores along the busy main road to see if we could find another immersion heater.  No one seemed to know what the heater was, unfortunately.  It took us a little while to find a hotel – we had a bit of sticker shock on the first couple of places we tried but we did find a decent room at the Hotel Prim’s – it doesn’t look so hot from the outside but it seems okay inside (we even have a refrigerator in the room – and airconditioning!).  We saw later that there was another, newer flashier Hotel Prim’s – Business Class (note that last part seems to be included in the name), so we are obviously in the forgotten second-cousin hotel, but it works for us.

After another fruitless search for an immersion heater we met up with Mark, Hana and Richard (the bikepackers) for dinner – they spent a rest day here to recover from some travellers’ illness.  We weren’t too successful on our other goal of getting some brake pads, but we did get some for Kathrin’s bike – Philipp had asked us to pick some up if we saw some.  We actually are fine with ours and our spares probably all the way down but Dave would feel better if we had another spare set so we’ll try to find some as we hit some bigger towns south.

But best of all we were successful at getting some more peanut butter!  I went to the grocery store while Dave was trying to do Spot (our GPS tracker, which for some reason sometimes takes forever) and found crunchy peanut butter.  I only bought 2 jars as I knew Dave would be aghast if I asked him to carry more – so we’ll have to nurse these along until we find some more.

Tuk tuks by the thousands in Jaen

We have a couple more days of relatively flat riding before we start climbing up into the mountains again.  The downside is the heat but it is nice not to have to wonder how long it will take to get up steep hills.  No worries though, I am sure we will get lots more of that very soon.